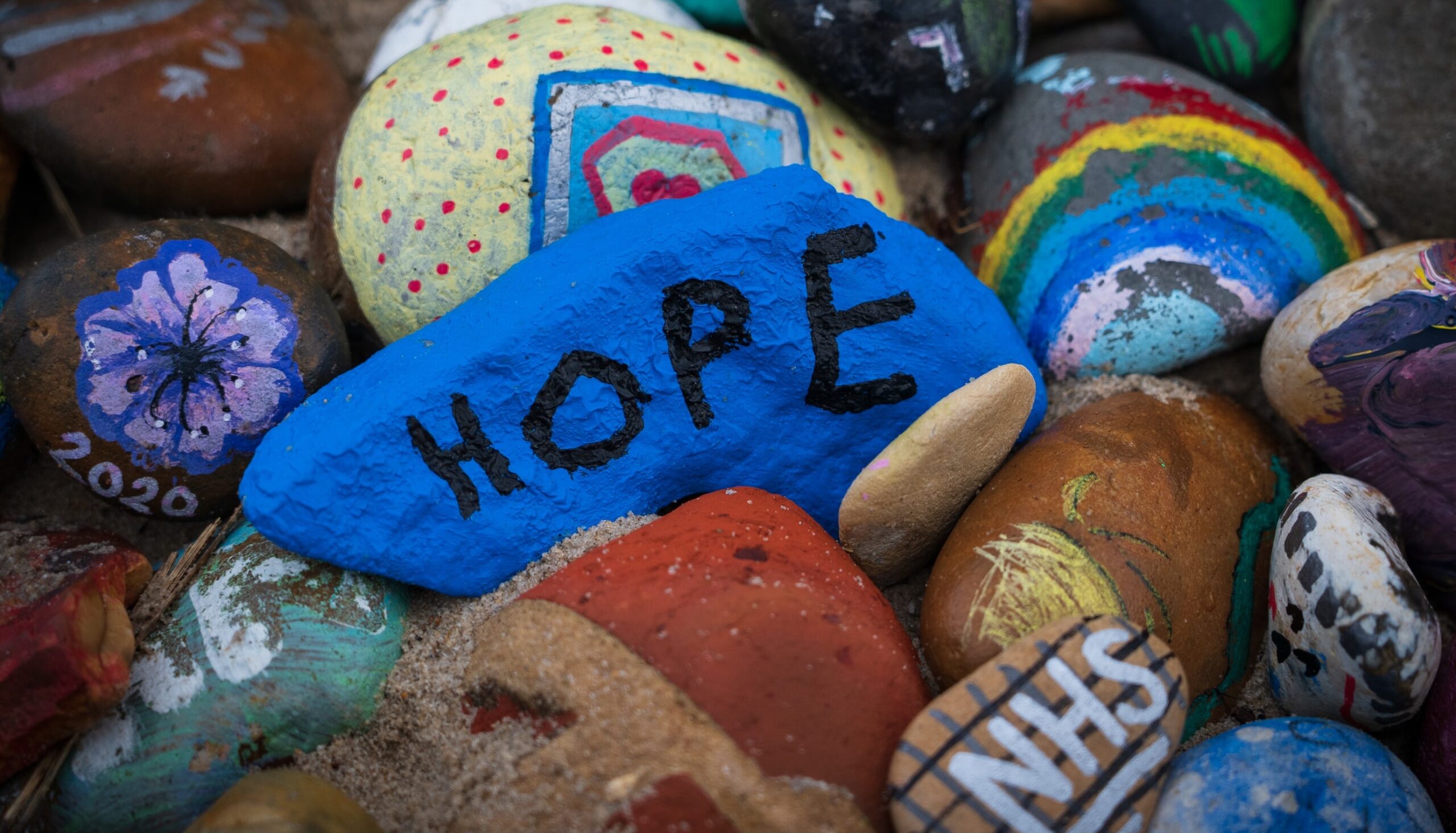 Lisa Fraser is moved by a man who thinks a better world is not an idle fantasy.

The stark statistics of Covid-19 infections around the world remind us that the virus has not yet gone away but in many countries we have started to rebuild our lives and economies. Now is the time to put into place that ‘new normal’ we first dreamed about, then began to envisage and now has become a very present challenge.

But what should this new society look like, and is it possible anyway? Can we really make any significant changes? One man certainly thinks we can and has outlined an extraordinary and even revolutionary vision of what the post-Covid world might look like. But are these achievable dreams or mere fantasy?

The man – perhaps it was to be expected – is Pope Francis who, in a video message for the 4th World Meeting of Popular Movements, made a prophetic call for new socio-economic models ‘with a human face’. Such movements, made up of grassroots organisations representing groups like the poor, the underemployed, indigenous communities and farmworkers, have always been especially close to the Argentine pontiff’s heart, so it’s not surprising that he should share his dream with them, people whom he describes as ‘social poets’.

The World Meeting aimed to discuss the social challenges our world is facing, especially looking at workers’ rights. Participants included street vendors, artisans, fishermen, farmers, builders, miners and Christian workers of various trades and professions. The Pope’s message is an ode to those who are usually not in the spotlight.

The style of the message is surprisingly poetic, which contrasts with the harsh reality these professions face. Pope Francis praises their ability to keep on going at a time when the rest of us were in lockdown, and he even calls health workers ‘martyrs’ of solidarity’.

Yet, beyond these well-deserved praises, the Pope’s message has practical implications for each one of us: it aims to shake up the world and make us take action to promote the common good.

In his speech, he identifies some of the risks we’re facing. The first risk poses a threat to the human body: the pandemic has widened the divide between those who can afford the bare necessities, like food and medicine, and those who can’t. Supply chain issues and the unequal share of supplies are even more worrying than before.

The second risk poses a threat to the human soul: Pope Francis warns against the risk of despair, and he even mentions the painful phenomenon of youth suicide.

Nothing in his dark picture is new to us: sadly, we know that hunger, poverty and loneliness are real. Yet, given that the situation is slow to evolve, or has worsened, it is useful to bring people’s attention back to these scourges again and again so long as there is a fight to fight.

The fight that lies ahead of us – nothing less than a painful recovery process – is colossal. Yet, Pope Francis warns against the temptation to give up before even facing the challenge. Paralysis (no action) or conformism (following the crowd without seeking new solutions) will not lead us to a new, better world, he says. Defeatism is also a threat to our freedom: if we don’t fight for the truth and for justice, we risk being ruled by false ideologies and losing control over our destiny.

Pope Francis warns against this danger, as he urges us to take back control of our own lives and of our economic systems. For too long we have simply assumed that these follow their own relentless dynamics and we are powerless to stop them.

Pope Francis is not an idealist but a very practical man, au fait with the realities of our modern world. He acknowledges the resistance, pressure and limitations we will face to change the system. He encourages us to dream of a new world order regardless, because dreaming is what ‘gets us going, [and] can set us on our way’.

Dreams keep us alive and help us project ourselves into the future when the present looks dark. They’re also the first step towards change.

Pope Francis points out that we are not cursed, and that the world can change: “it was precisely the dreams of freedom and equality, of justice and dignity, the dreams of fraternity, that improved the world.” Therefore, dreaming is not only for artists, and for children; dreaming is for the builders of our future, for the fighters for a better world, for those with their feet firmly on the ground.

Pope Francis encourages us to use a human trait which has rarely been discussed in papal documents: creativity. More importantly, he calls on us to use our creativity to dream of a world where human dignity becomes the centrepiece. He stresses that workers are not just cogs of a machine: they’re human beings, gifted with dignity which should be respected and nurtured. Dignity requires us to revive our local communities, where brotherhood and equality become real through encounter and dialogue.

As we belong to the same planet and global destiny, we are called to ‘dream together, dream among yourselves, dream with others’. This message is particularly timely not only because of the pandemic, but also because of the tendency to tribalism that has emerged in many countries.

As we see these divides grow – be they political, economic or social – Pope Francis urges us to take action. This takes the form of a powerful litany in which each call starts with “In the name of God, I ask…”. For instance, he urges the extractive industry to stop destroying people’s environment; and he presses the communication industry to stop ‘the logic of disinformation’, and to stop exploiting people’s weaknesses.

This stylistic choice makes it clear that this is not Jorge Mario Bergoglio speaking but the Pope sharing the Word of God with people on Earth. Thus, he anticipates criticisms which could label him as ‘left-wing’ or ‘communist’. He makes it clear that his message is not about politics: it’s a Christian call to conversion.

We, individually and collectively, must stand up for the people who are vulnerable, or exploited. We are called to fight for social justice. We must be agents of change. The message couldn’t be clearer: “It is necessary to confront together the populist discourses of intolerance, xenophobia, and aporophobia, which is the hate of the poor.”

Here too, the message is crystal clear, as the Pope spells out the changes which God’s commands require. The list denounces behaviours which lead to people living in precarious situations (like low wages, or undignified working conditions), and which treats them as mere workers and not human beings with their own lives and needs.

It also denounces economic forms of behaviours which destroy local communities and their means of subsistence by damaging the environment, or which harm the soul. These latter might include businesses which make money based on lies or promoting social division, or through pornography. Through this long list, the Pontiff reminds us of our duty to take a holistic approach to human development.

It would be too easy for us to read this list, see that we don’t work in any of these industries, and take no action. Therefore, the Pope goes further by calling on ‘social, trade union, religious, political and business leaders’. The aim is not to oppose leaders to the people under them but he makes it clear that no one is exonerated from liability. As he puts it:

“Every person, every organisation, every country, and the whole world, needs to look for moments to reflect, discern and choose, because returning to the previous mindsets would be truly suicidal and, if I may press the point a little, ecocidal and genocidal.”

This message is powerful and deeply moving. It reminds us of our duty to care for both individuals and humanity in general through our daily actions and life choices.

The pandemic has caused more damage worldwide than any event since the Second World War; it is time to question these choices again. Pope Francis shows us a direction which is more respectful and more sustainable. It is open to everyone, even people of no religion. However, Christians – people who are committed to follow Christ – have an even greater duty to obey these moral commands: we are called to pray, dream of a more dignified life for all, and to start building it. Reading this message must change our heart, and our life.

Enjoy reading about Pope Francis? Click here to take a read of our recent piece by Margareth Sembiring, she discusses the value of the Pope’s message to those attending the important COP26 meeting.