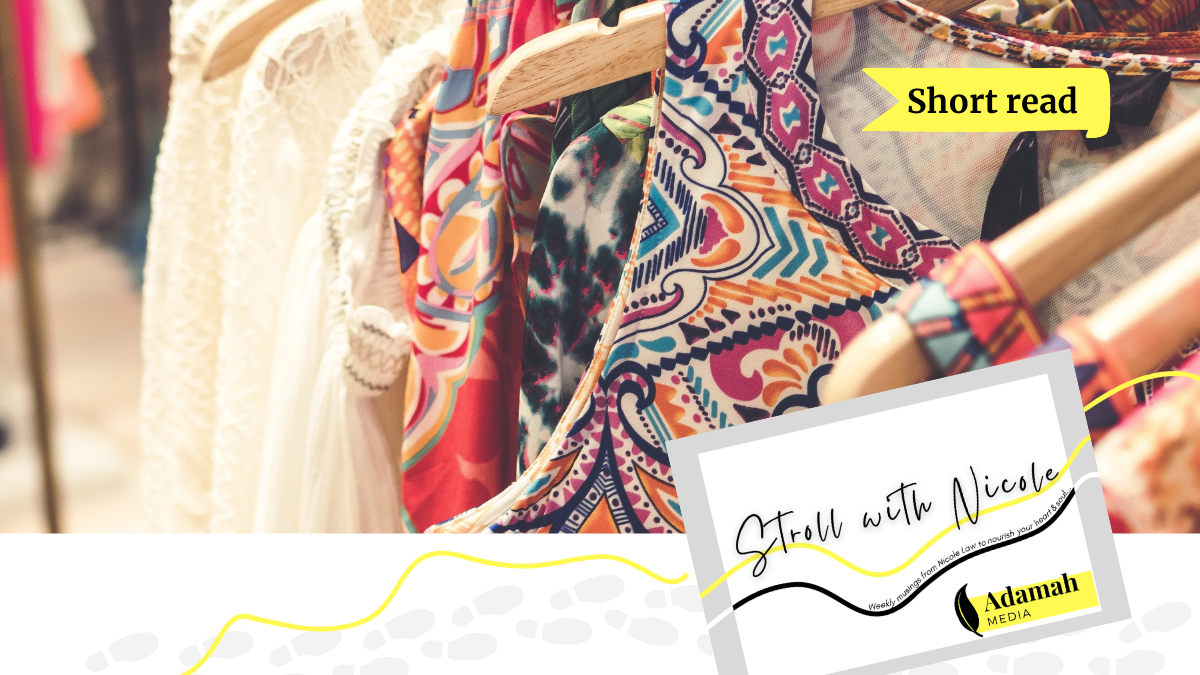 Nicole Law looks at the dilemmas of the catwalk and suggests it’s time to engage in a new way of clothes shopping.

“You are what you wear” … not an original phrase but one that took on a whole new meaning for me recently when I attended a short talk on the evolution of Singapore fashion.

The talk brought home to me the historical and economic undertones of the industry, which I had never previously considered.

One of the main speakers was the founder of a local label which markets South East Asian-inspired contemporary fashion. I have been an avid follower of the designer’s work on social media and marvelled at how she incorporates characteristically Asian design ideas and motifs into her pieces.

A lecturer in fashion history at a local arts institute commented that much of fashion involves ‘cutting, pasting and arranging’ and that phrase got me thinking about the development of fashion both in Singapore and worldwide.

In the 1960s, much of Singapore’s fashion involved imports from Western countries. In other words, many of the styles worn by my grandmother’s generation would have been first seen on London’s Carnaby Street. This was partly due to the economic linkages between the two countries at the time. Then, as now, many goods consumed in Singapore were imported from overseas.

Yet, though the beginnings of our local fashion industry involved reinterpreting the latest trends from fashion capitals such as Paris, Milan, London and New York, designers here also started to incorporate local design ideas such as silhouettes, patterns and motifs resonant of Singapore.

I wondered whether local designers could chart a new way forward of ‘cutting, pasting and arranging’ to elicit pride in methods and ideas that were unique to our small island.

This points to the larger question of cultural homogenisation and hybridisation; in other words, when are we just copying and when are we, instead, taking ideas from outside to make our own new fusion? This involves the ongoing tension between assimilation and cultural integrity.

So fashion touches on questions linked to globalisation. Cutting ourselves off from the world is no longer an option, and neither is it healthy. But nor do we want to lose our local culture.

Fashion itself is a vehicle for cultural ideas. It’s a wearable exhibition of the creative product borne of various ideas and artistic visions.

Yet fashion also has the risk of being just that, fashionable: a passing phenomenon lacking the grace and depth which time brings with it, when fashionable becomes classic.

The designer then moved from the process of design itself to the next stage in the supply chain – that of the price point. I wondered what constituted fashion – the high-end pieces she was famous for or the everyday garbs that women like me wear to work. If fashion were reduced to the haute couture or gilded gallery of collector’s items, was I excluded from the narrative?

Personally, I do not have the purchasing power to buy her clothes, though my heart might yearn to own a dress or two bearing her label. The price range is way above my budget. But I respect and value the craftsmanship of the artisans who create these unique garments.

The designer herself mentioned that it was difficult to engage workers with the technical dexterity and expertise to execute such complex designs. This may go some way to explaining the price tags!

At the other end of the spectrum, we have fast fashion, in which a trip to the high street will yield reams of cookie cutter pieces built on a buy and throw away model.

The issue then seems to be – how do we combine sustainability, supporting the livelihoods of those in the creative industry from workers in mass-producing factories down to the women sewing complex designs, and keeping clothing affordable?

One could simply argue that the market for fashion is already segmented by purchase power and it’s just a question of selecting an option appropriate for one’s budget. The deeper problem persists though – the supply chain of fashion is unsustainable.

I confess I am guilty of buying clothes for the simple reason of it being ‘on sale’. This type of thinking is what fuels consumerism and makes for an unsustainable system.

As consumers of fashion, we are sometimes unaware of the true cost of producing the garment we see on the rack. There are hidden costs in terms of both labour and raw materials, together with the environmental damage wrought by dying fabric and even procuring the primary source materials for the various elements of a garment.

We consumers want high-street prices and high-end quality – yet the two cannot exist in the same product. Does this mean that women like me will be unable to afford that designer’s unique pieces? Not necessarily, if we start to consider the impact of our spending as consumers and realise that the lie of ‘volume’ can be replaced with a more careful and considered consumption pattern.

More than having a full wardrobe, make it an elegant one.

I foresee a few possibilities in this regard. One, cut down on unnecessary purchases simply because the items are on sale.

Two, cull your wardrobe to a few key pieces and mix and match.

Three, where possible, invest in quality pieces that last and hence have less impact on the environment.

It might seem odd to cut down on consumption in the context of a capitalist society: doesn’t it support the livelihoods of many people working in the apparel industry? Yes, but the question remains as to how we can balance concern for the livelihoods of individuals with the environmental impact the fashion industry has.

We also have to ask ourselves whether the industry really needs to be so big. Instead of employing so many people in making our clothes, we could find other ways to employ them for more altruistic causes but which are also profitable: industries which promote public health, infrastructure, communication, care for the environment, tourism, food production for the poor, and so on.

Maybe it’s a question of reimagining our economy.

The next time I put a dress into my online shopping basket, I will give it some serious thought. And perhaps, with that additional consideration, we can start to pave the way towards a more sustainable (yet stylish) future, conscious too of the people working to make those clothes.