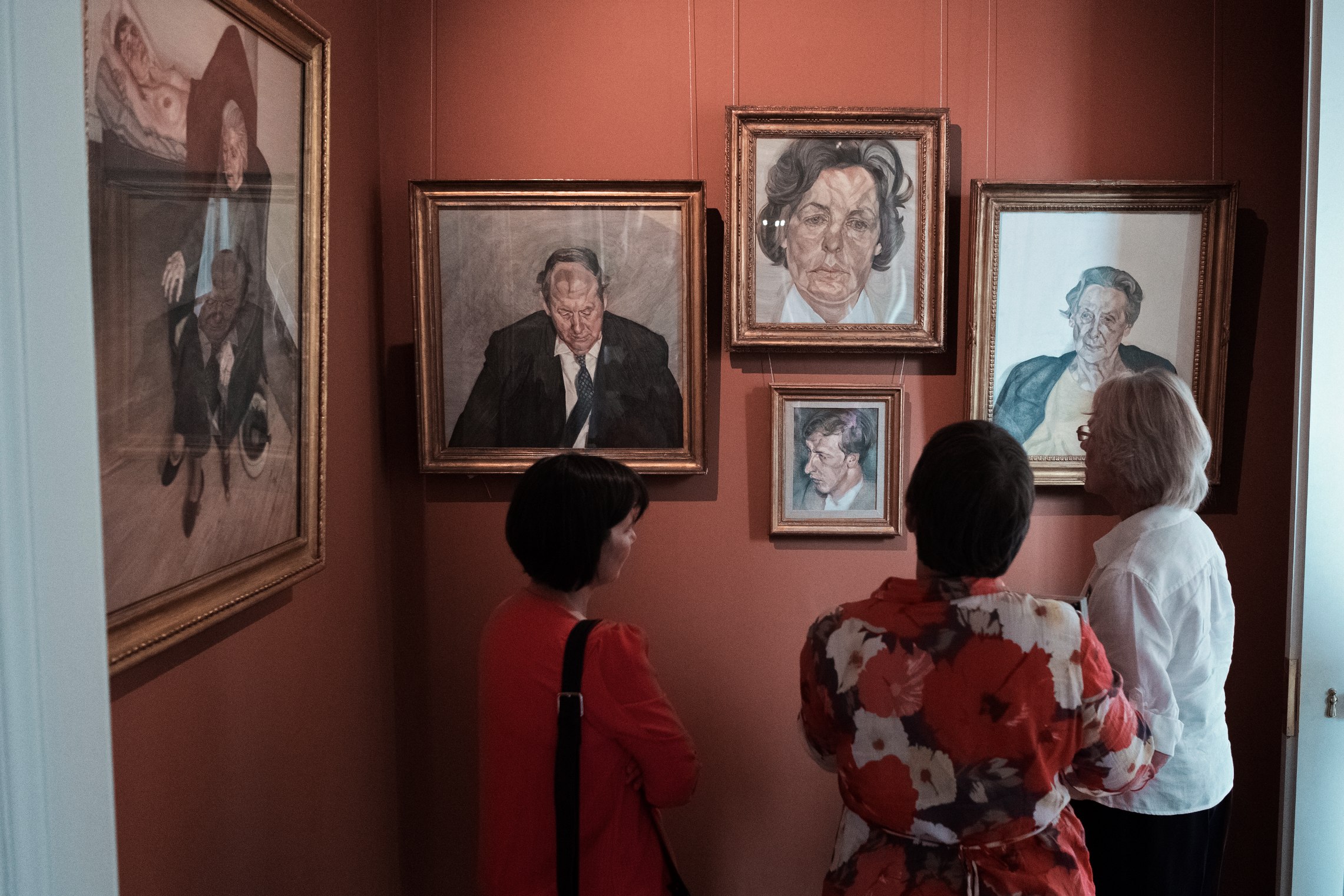 Adam Brocklehurst offers a starkly honest review of the exhibition Lucian Freud: Real Lives at the Tate Gallery in Liverpool.

My first encounter with England’s finest portraitist Lucian Freud (1922-2011) came quite unexpectedly, during a childhood outing to the impossibly grand Chatsworth House, the ancestral home of the Cavendish family in the English Peak District and the seat of the Dukes of Devonshire.

I was obsessed with the easy glamour and obvious beauty of the society portraits held in the collection, the works of Thomas Gainsborough and Joshua Reynolds, and the portrayal of the sheen of silk captured by John Singer Sargent. Freud’s sombre work made an unexpected and not necessarily welcome contrast.

The ducal family were early patrons of Freud and what I had stumbled across by chance was his Large Interior, London W9, a masterpiece from 1973. Unsurprisingly for a child not yet in his teens, I found the hyper-realistic nudity, thyroidal eyes and psychological depth in the depiction of his mother and lover, unnerving. Now 30 something years later, I’m attending Lucian Freud: Real Lives at Liverpool Tate, and it feels like an uncomfortable reunion.

Lucian Freud (named for his mother Lucie) was born into privilege in pre-war Weimer Republic Berlin. He was cosseted by claustrophobic maternal love and his maternal grandfather’s wealth (he was also a grandson of the father of psychoanalysis, Sigmund Freud).

Unlike his renowned ancestor whose reputation has suffered, Lucian has never ceased to be relevant since his days as the enfant terrible of the London art scene in the 1940s.

Ironically, we have the rise of Nazism to thank for his presence in Britain, the family having fled Germany in 1933, almost certainly saving themselves from the horrors of the concentration camps.

According to his biographer and friend William Feaver, Lucian was ambivalent towards exhibitions, referring to them as ‘punctuations’.

The same might be said about Real Lives. Freud understood the haphazard nature of his ability, and this is a representative selection of his work, drawing on portraits from within the wide sphere of his relationships, his mother, his muses, even his pets.

Some are good, some indifferent; there are paintings, sketches and etchings, interesting landscapes and a memorably beautiful Still Life with Squid and Sea Urchin (1949). The masterpieces punctuate the exhibition rather than dominate, making for a lacklustre display.

The star of the show for me is the early work Girl with a White Dog (1950-1951). It depicts the artist’s first wife, Kitty Gorman, daughter of the sculptor David Epstein. They married after his affair with her aunt Lorna ended.

Here his debt to the early Flemish school is most obvious, the technique and clarity is meticulous, brilliant even. The composition is classical, with echoes of a Giorgione Madonna with one full breast exposed (Kitty is actually pregnant). The infant Christ has been replaced with an elegantly reclining English bull terrier. Her eyes have it, and they are beautiful haunted eyes, with real suffering evident. The Guardian newspaper critic Maeve Kennedy believed she saw insanity, ferocity and violence glaring back at her. It’s hard to disagree.

Freud has been accused of disliking humanity, and punishing our species in his portraits.

While he may, or may not, have been a misanthrope, he certainly was a terrible husband, repeatedly unfaithful; he could also be chronically uncaring and emotionally abusive. Typically, it is Lucian’s exposure to Kitty’s suffering at his own hands that he records; for him she was simply a mechanism to create art, her feelings are entirely secondary to his technique, his aesthetic desires. He believed any psychology present was his rather than hers. It’s exploitative and we know it.

His brutal self-portrait Reflection (1985) shows his willingness to turn a harsh lense on himself. The rakish good looks of his youth are still just about discernible, but at 63 his decline is clearly well underway. The innumerable lovers, drawn promiscuously from all classes and genders, the shoals of children (he acknowledged 14), the years of dissipation, have all left their scars.

By late middle-age he is almost a parody of himself, Casanova at life’s end, or Lord Byron had he lived another 30 years.

Ultimately, he tells us, we get the face we deserve. And this is as true for himself as it is for anyone else.

In these later portraits his technical virtuosity, his brilliance, the furious way he handles the impasto, come to the fore. We, the laymen, can appreciate how he worked a canvas up, one heavy layer upon another, adding as much as he removed in the exposure of the sitter. Freud said he wanted to control the paint, and indeed he does.

Like El Greco, Goya and Picasso, he uses the manipulation of the flesh as a means of communication. In David and Eli (2003-4) he exaggerates the form, making the loose folds of skin surrounding middle-aged genitalia – something he directly related to the face – communicate what it means to age. With Freud the body speaks for itself, this was his intention and while what it says is often grotesque, he still succeeds triumphantly.

Despite his genius, you cannot remove Freud from his less personable traits. His poor treatment of his partners and models would certainly place him under scrutiny today, yet he acknowledged that this was part of his method. Freud’s genius is in his unflinching honesty, and like all stark honesty it’s often unpalatable. Take away the artifice, the makeup, the gym, the expensive clothes, and he reveals what lies beneath.

Ultimately his works are a danse macabre for the 21st century. They remind us where our final destination is, whether we like it or not. That the seed of bodily corruption is planted at our very conception. This dystopian vision of the human form is curiously soulless, but perhaps still an appropriate response to a world which champions youth over wisdom, the sleek young body over the wrinkled one, and which increasingly, even obsessively, refuses to accept the futility of the material life.