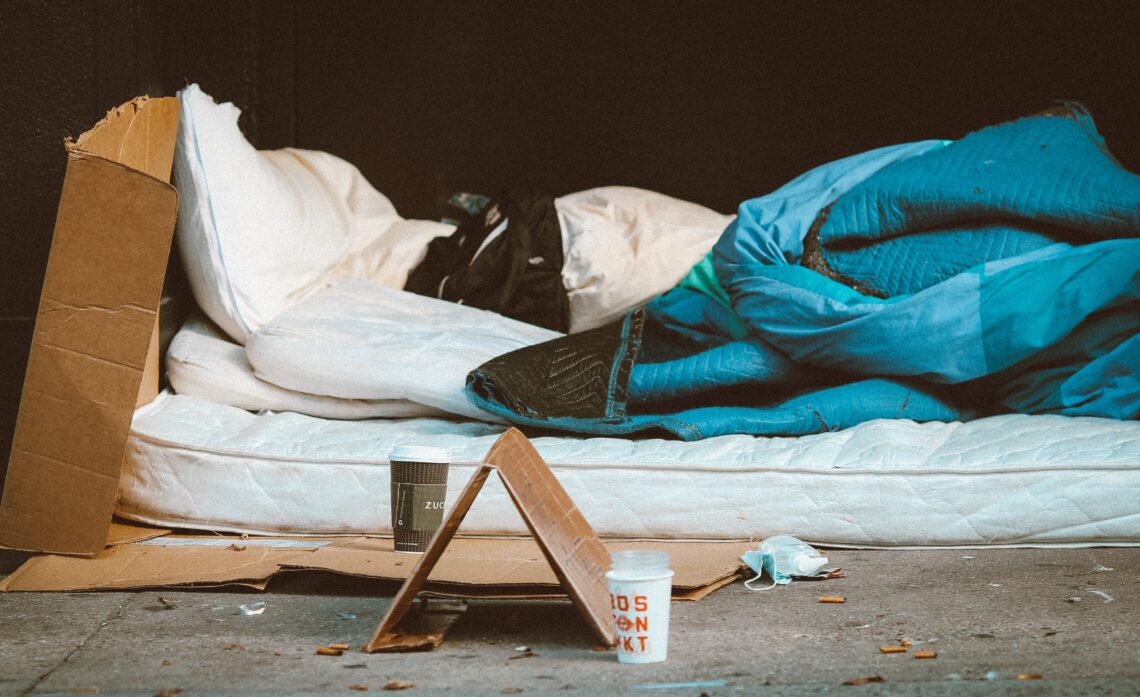 Maddy Fry enters the maze of rules and regulations which keep thousands of people in the UK trapped in a circle of homelessness and despair.

In a place like London, rough sleepers have become as familiar to the landscape as the city’s many statues and monuments. Both are treated with indifference by many passers-by; yet both are unlikely to disappear any time soon.

During 2020, when the first wave of Covid-19 was ravaging the UK and the planet, the unthinkable seemed to happen – rough sleeping in Britain was, briefly, solved. The government’s ‘Everyone In’ programme, designed to prevent the virus spreading among those living on the streets, involved bringing around 33,000 people into hotels before supporting them in the next stage of finding long-term accommodation.

Campaigners say, however, that few lessons have been learned since then. At the end of July 2020 contracts between local authorities and hotels taking part in ‘Everyone In’ came to an end. A report was leaked by civil servants showing that the government was considering axing funding for those in emergency accommodation, while simultaneously demanding people be moved out of hotels.

Those tasked with carrying out this edict were understandably confused. The Mayor of Greater Manchester, Andy Burnham, called for more clarity, saying that moving 800 people out of hotels and into long-term accommodation was ‘an extremely challenging task to deliver’.

Louise Casey, the former head of the Rough Sleeping Covid-19 Response Taskforce, has since maintained there had been a ‘huge improvement’ since the first lockdown in terms of reducing the number of people sleeping rough.

However, a support worker within the housing sector who chose not to be named said that “the government hasn’t formally declared an end to ‘Everyone In’, but they also haven’t provided any more instructions about it. It’s basically been left to every local authority to decide whether to carry it on, and if so at what level. There’s going to be problems sustaining something like that without any government affirmation, shown by how hotels in the Greater London Authority are being decanted.”

The message from the state to many across the country seems to be that homelessness could be solved, but only when prompted by a major national and global crisis.

Yet homelessness is a complicated phenomenon that comes in many forms, both the visible and the less visible. Views on how to deal with it, including how to prevent it from happening in the first place, are as varied as the phenomenon itself.

John Bird, the founder of The Big Issue (a magazine sold by homeless people in Britain that calls itself ‘a hand up, not a hand out’), recently described his own journey from destitution to becoming an influential businessman and peer in the House of Lords.

Speaking recently in the Craigmyle Lecture in central London, he depicted his childhood as one of poverty and violence, defined by an alcoholic father who was a ‘walking disaster’. Bird was homeless from the age of five and became ‘disturbed, antisocial and violent’. He was expelled from school and served time in a juvenile detention centre, where he got an education and learned the basics of the printing trade. The process of rebuilding his life was a long one, and he emphasised how he had been given chances to improve himself at various stages rather than just ‘hand-outs’ that didn’t address his needs.

Lord John Bird at his recent lecture in London.

“We have to reinvent giving because we have to give to people so that they themselves, in a way, can start giving and they can move on out of poverty. There are too many traps in this world that keep people poorer longer than they need to be,” he said.

He highlighted one of those traps as social security, which, he said, rarely gives people enough to live on and means they are always moving from ‘one emergency to another’.

“We need to try and dismantle the problems that lead us to a situation where we continually use government money to keep people in poverty,” he asserted.

Anyone who has ever interacted with The Big Issue will know that this vision is at the core of its ethos, and Lord Bird maintained that the organisation had helped many people move on into better forms of work.

Yet what about those whose needs are too complex to ever take advantage of that kind of support?

Rather than limit the role played by the government, the housing support worker I spoke to argued that austerity and heavy limits on government spending had contributed to the current situation, one where rough sleepers have become a depressingly common fixture across the country.

“The current approach to solving homelessness is too piecemeal. Organisations like The Big Issue shouldn’t have to exist. Why are we placing the responsibility on individuals rather than thinking more collectively? We still think too much that there is a ‘deserving’ and an ‘undeserving’ poor.”

She added that  “Everyone In” helped people who were ‘middle risk’, but not those with complex needs, including those with disabilities, addictions and mental health problems. She said: “We need to build more houses, but more money also needs to be spent on prevention. This means having a more integrated support system that includes bespoke services for people’s individual needs, rather than leaving everything up to local authorities.”

Ideally, she said, responsibility for preventing homelessness should be with a regulated and centralised body rather than with ‘a minister trying to survive another week in Whitehall’.

The picture is complicated further by how many homeless people are undocumented, often because they are living between properties, generally sofa-surfing and unable to find the funds needed to secure fixed, stable accomodation. Those in an assured short-hold tenancy have some legal rights against being evicted, but lodgers can find themselves with few options if they are pushed out by their landlords or find their living situation untenable, especially if they are on low incomes.

A woman in Somerset I spoke to, who has also asked not to be named, has been sleeping on a sofa for the past 12 months. At one point she thought she would have to sleep in her car. Her personal circumstances, including her separation from her husband, meant she needed to leave her home but found that the council could only give her “a bungalow that was too far from my daughter’s college. I couldn’t afford for us to live that far away so I had to move back in with my mum. It was too overcrowded, but the council then told me to just find a privately rented property. I’ve advertised but only had scam replies and inappropriate messages from men.”

For others, the patchy nature of local authority support means they are trapped in limbo while trying to find a permanent address.

Dave Sullivan, a 36-year-old youth worker from Camberwell in south London, has been trying to leave his mother’s house for the best part of a year. But as a nurse working 12-hour shifts, she struggles to support both of them and he feels under pressure to move out.

An accident in a previous job several years ago has meant he relies on Universal Credit but the payments and any work he gets are not enough for a rental deposit, which in London can mean prospective tenants have to pay at least £800 up front.

The local authority formally placed him on a homelessness prevention list and he applied for help covering the deposit. Yet he states: “You only get the money up to four weeks after you’ve found somewhere, and that’s way too long to wait. Most properties get snapped up on the same day by someone with more money.”

He is unsure what to do next and is worried about the possibility of having no place to live.

“If you don’t find accommodation within 56 days then they kick you off the list and you have to re-apply, meaning the whole process starts again. I’ve complained to my MP, and although she has listened she has done very little. It feels unfair.”

The anonymous support worker highlighted how “the sector isn’t a great place to work. People are perceived as being there with the best intentions, but they are paid almost nothing. Support workers are seen as disposable, and council workers leave, so there is high turnover and no continuity in people’s applications. That means they often mistrust the system that has been designed to help them.”

Underpinning all this is the grim reality that anyone could become homeless.

In a Britain faced by rising inflation, escalating house prices and an unstable gig economy that guarantees workers few rights, a person classified as ‘homeless’ is just as likely to be someone struggling to afford basic necessities as a drug addict or a person fleeing domestic violence.

The Media Diversity Institute has called for journalists to recognise this, placing individual stories at the heart of any reporting on homelessness rather than just relying on out-of-context statistics that make it easier to ignore the issue.

“Those whose only interaction with the homeless population is through the media are likely to think that the people they see sleeping rough caused their own downfall, and are not worthy of dignity or empathy,” the Institute has argued.

Or, as the housing support worker put it: “It’s not a one-size-fits-all issue. But whatever their needs, we should at least be willing to grant other people the same rights we want for ourselves.”