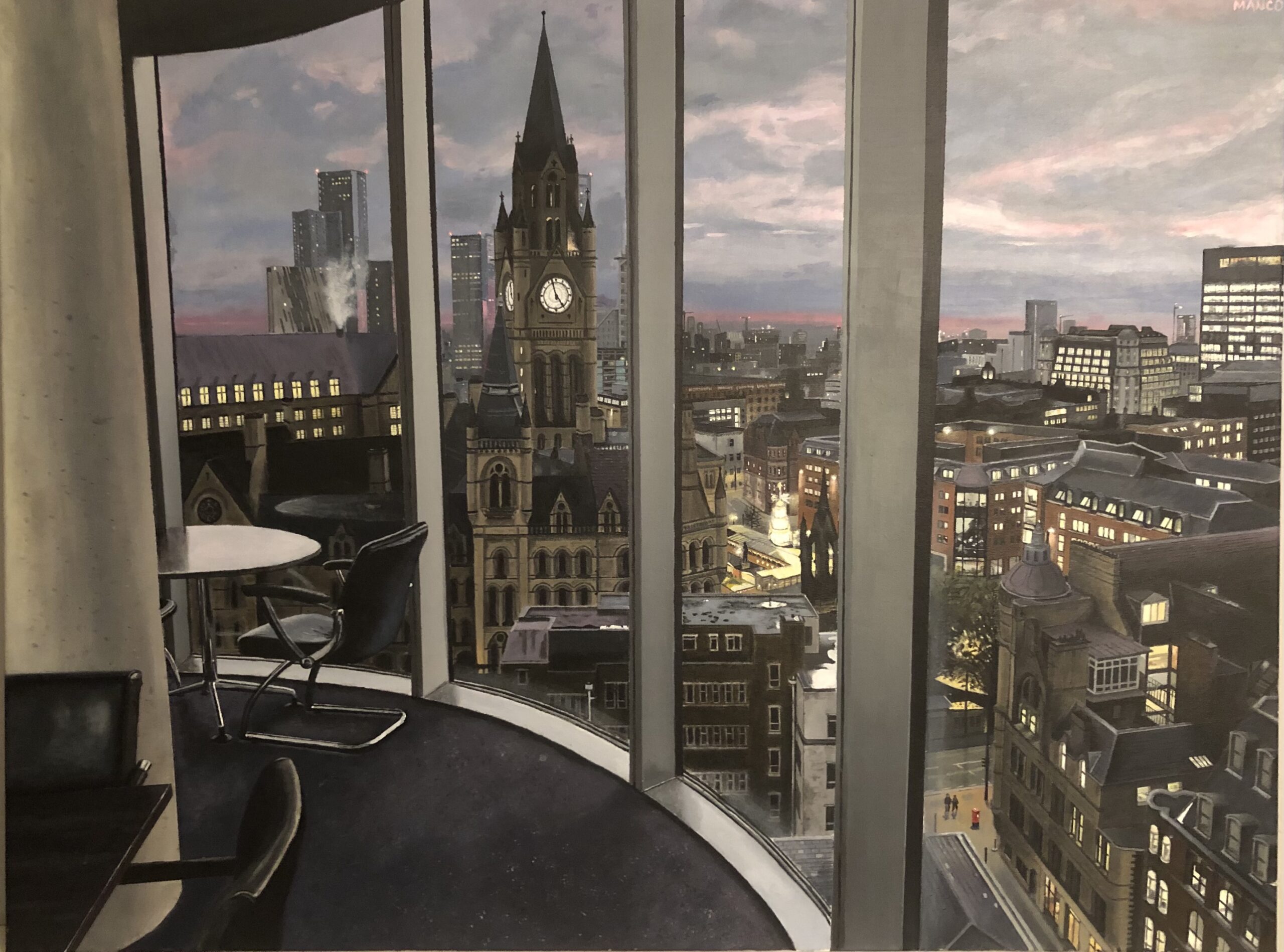 Adam Brocklehurst finds the art of Ollie Manco can act as a visual examination of conscience.

It seems bizarre, if not offensive, to suggest that the coronavirus epidemic might have been good for some people. So many people have died after all. The world has been altered beyond recognition, and the aftershocks are yet to hit, financial disaster may or may not loom on the horizon.

Yet beneath the smoking ruins of the Covid-scarred world, the human response has been one of great altruism, many people have devoted themselves to putting others first and at great personal risk. Everyday people, from all walks of life, have supported the medical workers and vaccinators working on the frontline as volunteers.

I first met the artist and former local councillor Ollie Manco in spring 2021 while volunteering at a Jain temple in the Levenshulme district of Manchester, one of the most ethnically diverse neighbourhoods in the world. The temple had been requisitioned as a vaccination hub, and we were vaccinating something like 1500 people a day. I was working in the car park, a challenging role due to the age and mobility of many of the people arriving. And the appalling weather had made things especially difficult.

Ollie was one of a team of volunteer coordinators, working with the health services to make sure everything ran smoothly. I found him approachable and pleasant to work with, but honestly didn’t think much more than that. After a short period, he left to work in another vaccination centre in the north of the city and our paths didn’t cross again until late summer, when a new clinic opened in Manchester town hall in the city centre, and I volunteered to pick up a few shifts.

One of the most fascinating things about volunteering during Covid is the egalitarian nature of the work.

We are all equal in our high visibility jackets, and it’s rare that conversation steers us towards our civilian employment or ‘other’ lives. So, you might have a nightclub bouncer unknowingly working besides a high-flying business executive, or an unemployed young person working with a renowned filmmaker.

I was enjoying a brief moment of rest from what had been a busy afternoon at the vaccination drop-in with Ollie and a few colleagues, when our lives outside of volunteering came up in conversation. Ollie had recently taken up art as a hobby. And being a writer and therefore naturally curious, I asked to see his work; he flashed a few images on his phone in my direction.

I was immediately taken aback by just how competent he was. While his style is idiosyncratic, perhaps the most obvious comparison would be with the work of Edward Hopper, the New York born Realist painter, whose urban landscapes say so much about the human condition, loneliness and social angst.

Later I would discover that although Manco came from an artistically literate family, his father was a 1950s crooner in his native Portugal. His brother, however, is the renowned expert on street art and author of The Stencil Graffiti Handbook, Tristram Manco.

Ollie is in fact entirely self-taught, only picking up a brush two years previously when furloughed, as a means of keeping hands and mind from atrophying.

Ollie’s acrylics are most often beautifully coloured cityscapes of Manchester, a thriving post-industrial city in the North West of England which was enjoying a boom prior to Covid.

It had become a city of expensive new apartments, of fashionable eateries, of rapidly altering vistas. The re-development of the city centre had been a cause of concern in his career as a councillor and he is on record as supporting conservation efforts.

The tension between the old and new, of overnight change, is caught with some skill in his large Manchester cityscape, Future Past Life. It is a panorama of the city overlooking Alfred Waterhouse’s 1877 neo-gothic town hall, but viewed from a building of decidedly more recent pedigree.

A personal favourite is Oldham Street#1, which captures the last gasp of the ungentrified city in great detail, where small shops jostle claustrophobically for space on the ground floor of a grandiose Victorian structure.

He paints pictures of places with meaning to himself, one – Cotton Street at Night – Ancoats – catches the birth of outside dining under heat lamps, just as the city began to reopen.

It’s a subtle glimpse into the gaiety and drama of other people’s lives, without being at all voyeuristic.

Others such as Lidl, depicting Newton Heath Manchester, an area in which Ollie was working in his NHS role, echo empty and plaintive, with the dystopian feeling that perhaps people have just fled in the wake of some terrible catastrophe. There is an eloquence throughout his body of work, which belies their apparent simplicity.

Some might deride his work as commercial. He’s in good company then, as such luminaries as Salvador Dali and Andy Warhol or Manchester’s own L S Lowry were considered commercial artists in their lifetimes. To me he’s only commercial in so much as his art would be pleasurable to live with, in the way that the work of more provocative and conceptual artists may not. It’s a democratic kind of art, art for the many, rather than the few.

I find something illusionary about his work, a world viewed from a distance, painted while our town centres, cafes and restaurants lay shuttered and empty due to lockdown. That’s where the depth and presence of his work lies. He has recreated a world during an existential parenthesis, a dream world that we wake blinking from and realise has passed away or perhaps never existed in the first place.

This disassociated feeling is enhanced by the twilight skies that creep into so many of his paintings, that liminal time between night and day, between light and the dark. After all – he seems to be saying – none of us know for certain what dawn may bring anymore.

And there is a tension in the characters, an awareness that they may be trapped in a kind of perpetual loop, confined to the limits of the canvas and the imagination of the artist.

We sense something terrible awaits, something with the power to maim and kill, to tear and hurt, to take away those we love most.

Manco is, of course, an artist of his time; he cannot remove himself from the context of the world around him. His suppressed emotions, frustrations and fears, all heightened by the pandemic, are evident in his work. And he, a frontline worker, must feel them more acutely than most.

There is hope present too, though. Hope that sometimes working against great odds can light up in us what is important, it can teach us new things about ourselves and our abilities. Manco himself is perhaps as much a commentary on the possibility of a society to change for the good, as his paintings are of a static moment in time.

Our lives are slowly returning to normal, and there necessarily will come a long period of self-evaluation, of processing the impact of the pandemic on ourselves. Did we help or hinder, are we better people now or worse? We needn’t teeter on the edge of nihilistic or existential oblivion. If we are satisfied with what this time drew out of us, we might continue onwards, or even reward ourselves with a rest. If we find ourselves wanting, then we might reevaluate and learn. Both are ultimately positive outcomes.

You can find more of Ollie Manco’s work on his Instagram page here:  Ollie manco (@olliemanco) • Instagram photos and videos