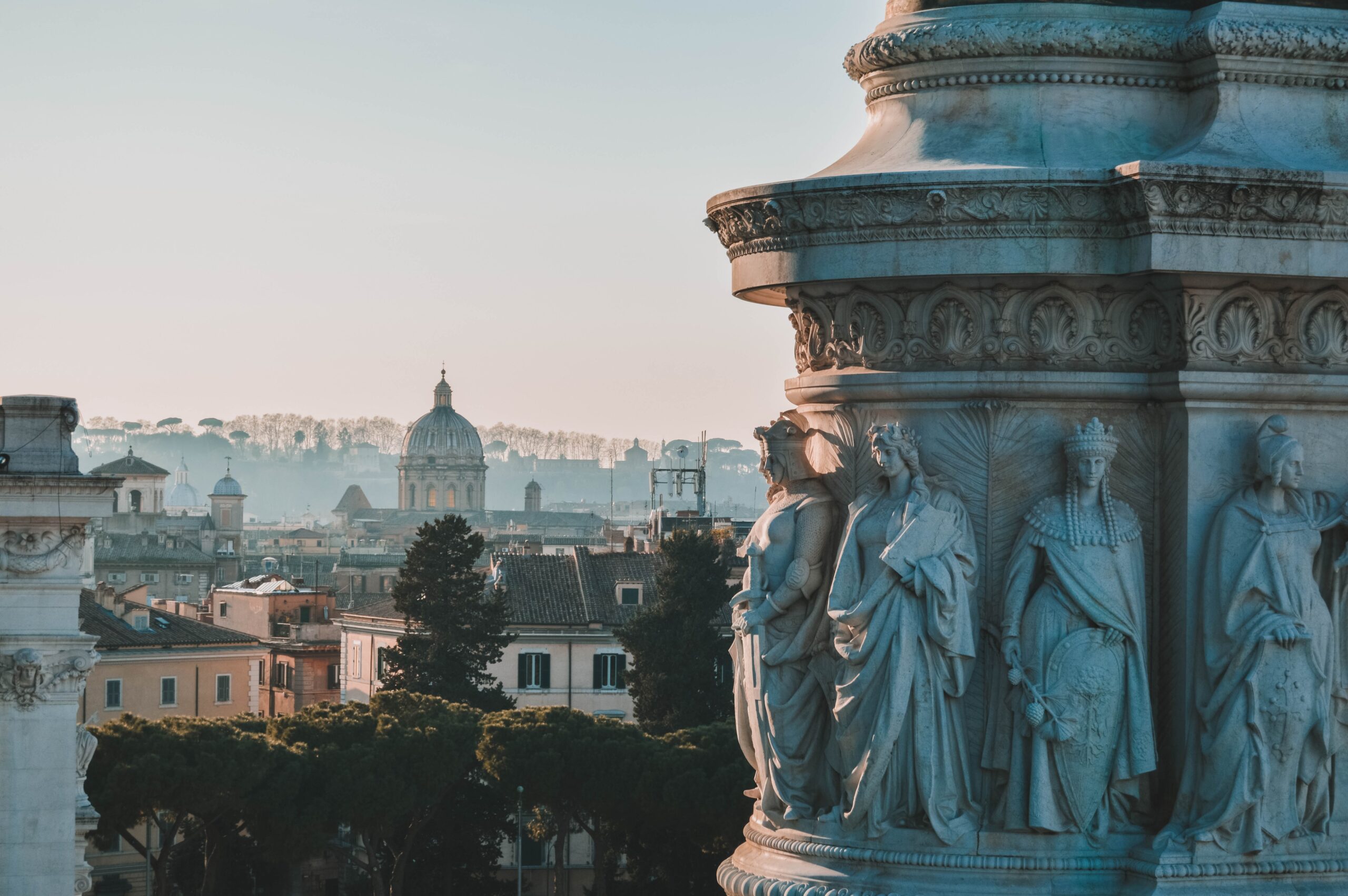 The fading glory of an Italian church teaches Adam Brocklehurst about suffering and compassion.

Now that travel is for many of us a forbidden pleasure, I can at least travel in my mind. And my thoughts can’t help wandering back to one of my favourite Roman haunts, the little known church of Santa Maria della Consolazione.

Rome has always been a favourite destination of mine. It boasts over 900 churches, unsurprising as it is one of the great pilgrimage centres of the world, steeped in 2000 years of Christian tradition. You can reach out and touch buildings that were ancient at the time of Christ. It is a city of layers, of ages built one atop the next, all freely available to those with the patience to seek them out.

There are late Roman basilicas of stately columns and worn marble, dimly lit byzantine churches inlaid with gold and lapis blue mosaic as crisp and fresh as the day it was laid 1000 years ago, and everywhere baroque architecture of a theatricality and intensity that can sometimes feel overpowering.

These churches are often the focus of great reverence and veneration, they contain relics of famous saints and forgotten popes, are the repositories of priceless artistic treasures – it costs just one euro to illuminate a Caravaggio masterpiece in many a Roman church! There is perhaps nowhere else in the world with such cultural and religious abundance.

In Rome, Christianity and great art are not separate, as they often are outside the Latin world, but are part of the everyday, living landscape.

Santa Maria della Consolazione is located at the foot of the Palatine Hill, once the epicentre of the Roman Empire. It was constructed between 1470 and 1600, its last major rebuilding being by Martino Longhi the Elder, a Roman architect of some note, in the Mannerist style.

Mannerism was the last aesthetic flowering of the High Renaissance, its architecture employed a flair and unconventionality, playing as it often did with scale and perspective, which often confused early architectural historians. Many derided the style as bizarre, both a contradiction and an ambiguity. The term ‘mannerism’ has had, until recently, almost always a negative connotation.

The church of Santa Maria della Consolazione is conventionally and elegantly mannerist. Unusually in overcrowded central Rome the visitor enjoys a three quarters perspective of the church’s exterior, so one can fully appreciate Longhi’s use of the giant order of pilasters, an architectural form that was a radical invention of Michelangelo for his Florentine Laurentian Library. It is, for all the grandiosity of Rome, a relatively understated edifice. Those seeking a more dramatic Roman expression of mannerism might seek out Giacomo della Porta’s work on the façade of the church of Gesù, the mother church of the Jesuit Order.

You enter the church beneath an appropriately dramatic fall of scarlet brocade, and emerge into the high and somewhat dimly-lit nave. To the left and right are darkened chapels. The immediate impact of the church isn’t the result of the fine architecture, rather it is created by the building’s gothic atmosphere, not gothic in the sense of an architectural style, but gothic as an emotional response.

It’s precisely this drama that so impacts the work of the Italian filmmakers Visconti and Fellini, the powerful contrast between the vividness of the sun-soaked Italian day, of the scurrying noise of the modern world, juxtaposed with the dark silence of ancient and sacred spaces. This tension is present in much of Italy where – by necessity – the old world lives cheek by jowl with the 21st century.

The church is un-restored, quite unusual for a major church in Rome. The paint peels from the walls, the gilding is tarnished, and grim and dusty cherubs peer down from the fine coffered ceiling. Yet none of this detracts at all from the impact of the church.

This is the Rome that foreign visitors encountered in the 18th and 19th century, honest and authentic.

It would be in my opinion a great mistake to attempt to over restore this church, to rid it of its patina, for one feels here the presence of the centuries, the power of prayer and the beauty of the Latin rite impregnating the very walls, more so than in almost any other church in the city.

Behind the dark ornate and decayed metal screens, there are faded frescoes of the martyrdoms and cruelties inflicted upon saints. A sculpture of Ecce Homo, behind the bars of a dark chapel, stands out: Christ’s anguished face, sorrowful and bleeding, acts as a reminder of His solidarity with believers in times of hardship.

A set of narrative paintings by Marzio di Colantonio (his speciality was bloody scenes of war and battle) record the crucifixion of the apostle Andrew, his name deriving from the Greek word for manliness and bravery. They depict him life-sized and naked, strapped to a crux decussata, his face calm and stoic.

These images are not meant to frighten, quite the opposite, their purpose is to inspire endurance and comfort in the observer, providing viewers with great examples of those who have borne their tribulations with grace.

The clue to this apparent contradiction is present in the church’s name, Santa Maria della Consolazione, the Church of Our Lady of Consolation. It is named after an ancient icon of the Virgin Mary brought to this place by a doomed aristocrat in 1385 to provide consolation to those, like him, about to be executed.

Appropriately, the church was erected beneath what is believed to be the Tarpian Rock, where, in antiquity, murderers, traitors and slaves convicted of larceny were gleefully tossed to their deaths. Its position here makes a statement: we are different to the pagan Romans, it proclaims; our justice is tempered with mercy and for those who repent there is a place outside of bodily suffering and the promise of rehabilitation and hope in the next life.

It is a humanitarian purpose in stone, a small mercy for those condemned to death at a time when society enacted a justice that was brutal and arbitrary.

Yes, the State still killed, but here at least the Church offered mercy and consolation, for consolation seems to me a better word than pity. It suggests an active relationship between the consoler and the person suffering. In the West, particularly in the great anglophone nations, it isn’t something that necessarily comes naturally anymore, especially when applied to people we think undeserving. The internet can be a cruel judge, and the many are often vicious in their judgements and merciless in their condemnation.

In America, in the weeks prior to President Donald Trump’s defeat by Joe Bidden, the Federal state executed five individuals. That this was part of Trump’s overall presidential policy seems self-evident: no president had executed more felons in over a century. Trump was also the first president in 130 years to continue executions during the period of electoral transition.

There was little consolation in evidence, actually there was the scent of blood in the air, and regardless of the crimes of these people, the voices calling for mercy were drowned out by the louder voices of those supporting their execution. It was undignified, inhumane and a reminder of how little humanity changes. A reminder of why we need places like Santa Maria della Consolazione.

This worse for wear church, battered by the years and Roman pollution,  calls on us to recognise the relationship between ourselves and those people in desperate need of consolation. It tells us that people have a right to our support in times of hardship regardless of their merit, that the relationship between ourselves and those suffering is symbiotic, something that is not only deeply humane but essential for our growth.