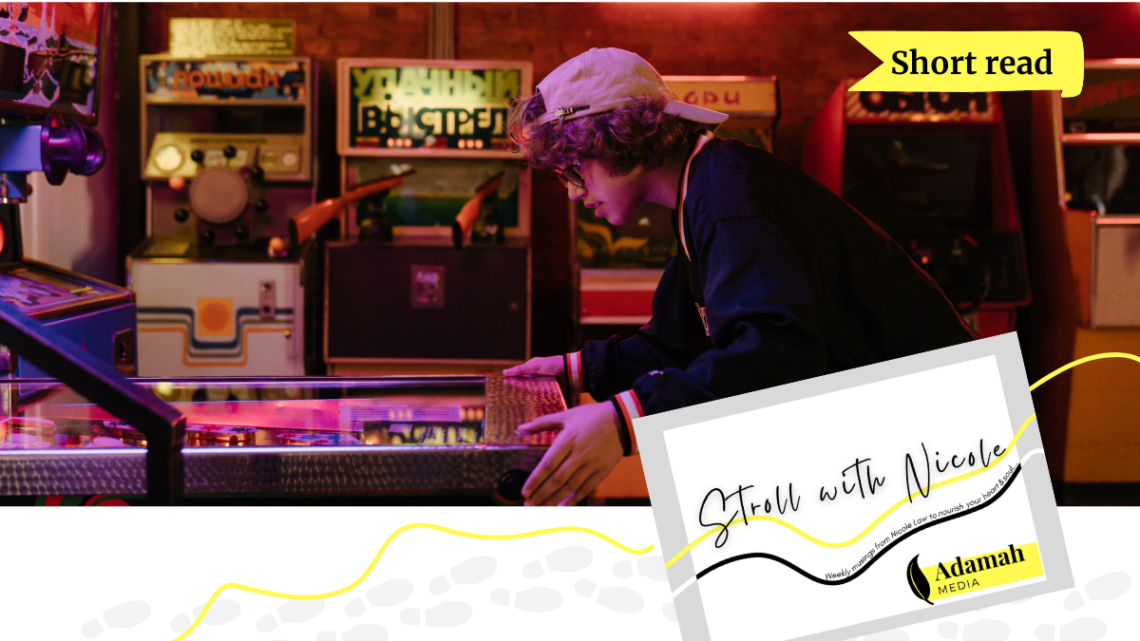 I delved recently into Min Jin Lee’s novel, Pachinko, a book which chronicles the multi-generational narrative of a Korean family from the early 1910s, through the turbulent world wars and into the 1960s. The title of the novel intrigued me particularly …

Pachinko refers to a Japanese gambling device resembling a pinball machine, but with automatic payoffs. The player loads one or more balls into the machine, then presses and releases a spring-loaded handle. The ball is launched into a metal track and when it loses momentum, it falls into the playing field. The ball bounces from pin to pin, which slows its descent and deflects it laterally across the field. A ball that enters a catcher triggers a payout and the primary objective of the game is to win as many balls as possible.

I quickly saw parallels between the game of Pachinko and how we approach everyday life. The game itself can be said to be a model of decision-making on a micro scale. Every day we are presented with a new game where we load one or more balls into life’s machine. These can represent our commitments or responsibilities – to work, family or friends. We are in control in the game in the sense that we start it by pressing and releasing the spring-loaded handle. From then onwards, our control over the game starts to diminish. And similarly with life.

The speed with which we press and release the handle has some bearing over the balls’ eventual paths down the machine. At one point, the ball is moving at its fastest speed. The initial acceleration is the effort we put into different areas of our lives. We plan, we give ourselves a head start, we launch into things with drive and energy, hoping that the first activation of the ball will help to guide its path (that is, our hopes and objectives).

As the ball reaches the metal track, it loses momentum – a terrifying prospect for some of us. In an ideal world, we would want the ball to continue to gain speed or, better still, maintain a consistent speed and path of motion. We favour predictability because we know how to handle it. We know how to adjust our responses, our enthusiasm and our energy levels.

Certainty gives us a false sense of confidence in our ability to assert control over the outcome of the game.

Crucially, at a certain point, the ball enters the playing field, where it starts to bounce from pin to pin. This is where we lose control – as we inevitably do in life along the paths we take. Throw in external factors and we realise how little control we actually have.

Control in the game is but an illusion, as it is in life. Instead, the invitation may be to lean in and let ourselves live with uncertainty.

The gradual descent of the ball resembles a return to equilibrium where it matters less how fast we go, but more so where we are headed. The lateral deflections are the detours that life takes us on. Sometimes, it’s a rough landing and sometimes it’s a smooth cruise down. We will have our fair share of both.

As the ball enters the catcher, I am reminded of how, much as we desire to ‘catch them all’, we often don’t. Sometimes, some of the balls miss the mark and end up rolling away. That’s OK. We don’t always come away with a perfect score. In fact, that’s why it’s called hitting the jackpot: the rare experience of attaining the ideal reminds us that despite our best efforts, there is often an element of luck, or, as I like to see it, providence, in the mix.

The game of pachinko and its popularity shed a light on the human desire to win in the game of life, to play the game perfectly in the hope of achieving the ultimate prize. Yet, at the end of the day, are we truly playing to attain the perfect, coveted lifestyle or are we playing in ‘real time’? Playing in ‘real time’ means  accepting a loss on occasions, placing our hopes on a particular ball for example, only to come away disappointed, but continuing to play all the same. It may mean remaining open to the twists and turns and deflections of fate (or as I like to see it, providence) and learning to accept uncertainty in daily life.

I wonder how the next game of pachinko may turn out, it may go either way. But maybe that’s also the beauty of getting older, we adopt a spirit of detachment from the outcome and instead watch peacefully as the ball descends, knowing that we may win or we may lose today. Frankly, it’s OK either way.