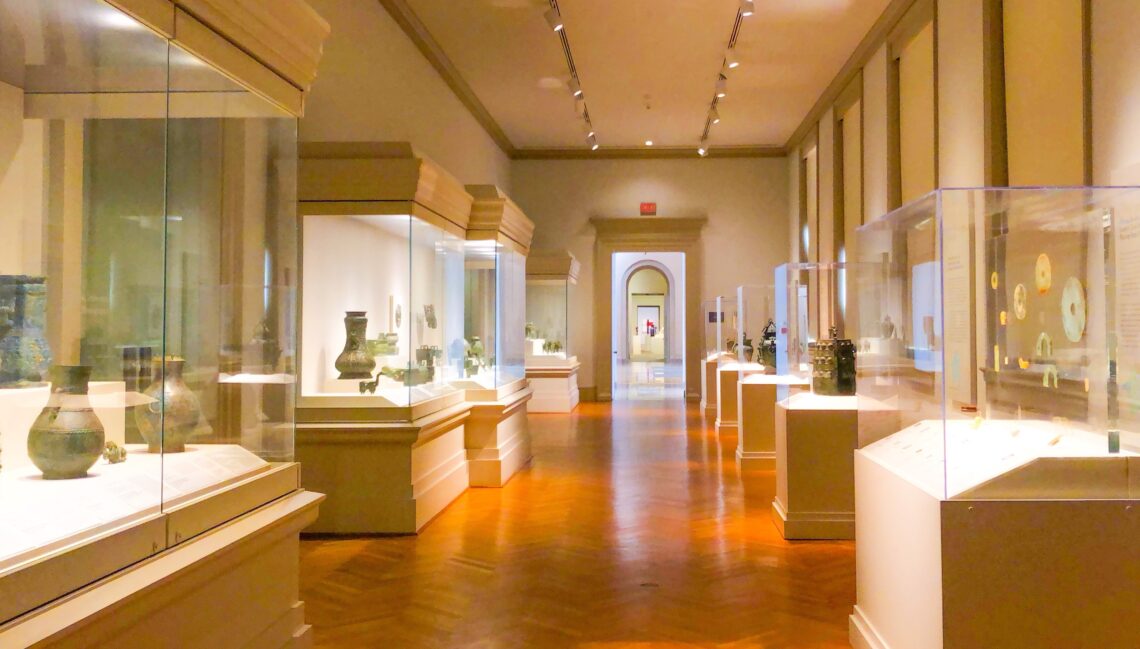 Adam Brocklehurst looks at the curious world of religious relics.

In a darkened gallery on the ground floor of the British Museum in London is displayed a fragment from one of the greatest of all Christian relics. It’s a single thorn taken from what many believe to be the crown of thorns, which was placed on Christ’s head by Roman soldiers as an act of mockery and torture during his passion.

The vicious looking thorn (from the notoriously spiky buckthorn tree) is encased in the Holy Thorn Reliquary, an ornamental display-case created to allow veneration of the relic in the round. It is wrought of pure gold, enhanced with edible looking cabochon rubies, sapphires and pearls, jewels whose colours are symbolic of the passion. It’s carefully enamelled and chased with minute figurative sculpture, depicting the last judgement and resurrection. The risen Christ holds up his pierced hand in an act of blessing. Various saints surrounding the thorn converse in an animated manner.

A sculpture of God as king presides above it, his hands holding an orb and sceptre, with a rather stern expression on his fine face. This masterpiece was created by an unknown craftsman in Paris in the 1390s for the Duc de Berry, known as John the Magnificent, a great patron of the arts and a member of the French royal family. It has been described as probably the finest expression of European metalwork to survive from the mediaeval period.

Meditating on this has the same effect as a great painting, or indeed a piece of writing. On a conceptual or mystical level, it aids our understanding of the event recalled, it works on our psyche in the ineffable way that objects of great beauty do, lifting us, improving our mental wellbeing. For all the suffering the item signifies, it is a joyous object (sometimes these objects are called Joyeux – literally from the French word for happy) both from the religious perspective through the reliquary’s promise of resurrection, and on account of the sheer virtuosity of the craftsmanship.

The word relic comes from the Latin reliquiae meaning ‘remains’, and denotes an object of religious or devotional use. Many of the major world faiths, Buddhism, Christianity, Hinduism and Islam, to name but a few, venerate objects associated with people, places or events of religious significance. It’s a surprisingly common belief that these left-overs are imbued with something of the humanity (or divinity), mysticism or supernatural ability that might once have been found in a particular person or place. And the relic is believed to contain a lingering trace of this. The possession or visitation of said relics allows ordinary mortals a kind of virtual encounter.

In truth, within contemporary society, a relic needn’t be religious at all. A jumpsuit owned by a more worldly king than Jesus, Elvis Presley, or a tiara worn by that most secular of saints Diana, Princess of Wales, will generate pilgrims enough to compete with the crowds who flock to Turin every decade or so to venerate the Shroud.

There are often taboos and laws relating to how most relics may be used. The great fourth century scripture scholar St Jerome warned: “we do not worship [relics], we do not adore, for fear we should bow down to the creature rather than the creator.” This is not true of Buddhism, where the relics of Gautama Buddha for instance, are worshipped. The Buddhists maintain a belief that sometime in the very distant future Buddha will rise, phoenix-like, bursting forth whole again, from his own cremated remains.

I can hear the incredulous snort, “Nonsense! These ‘relics’ were created to fleece gullible pilgrims and enrich the Church (or other religion, as the case may be).” This argument was used with great success by John Calvin in his Treatise on Relics (1543), twenty-odd years after Martin Luther had really got the ball rolling with the Protestant reformation, and Calvin was especially scathing with regard to the number of holy thorns in existence. Enough to constitute a forest in his view!

I don’t totally disagree. I remember reading about the shenanigans of the monks of Glastonbury Abbey (then thought by some to be close to the site of the mythical Isle of Avalon) who conveniently produced ‘relics’ of King Arthur and Queen Guinevere just after a fire had reduced their own collection of pilgrim-drawing relics to ash.

And I think a certain amount of scepticism is healthy, especially when much of what purports to be a relic probably wouldn’t stand up to scientific scrutiny.

On my own patch, the civic collection of the City of Manchester is comprehensive. It covers everything from great works of art by the likes of Rodin, Canaletto and Picasso, to the world’s first computer, and priceless early Shakespeare folios. Yet it is perhaps one of the city’s most modest objects that packs the biggest punch. It sits unobtrusively in the sublime gothic-revival John Rylands Library of the University of Manchester, a building often cited as being amongst the most beautiful libraries in the world.

This relic, known rather austerely as Rylands Library Papyrus P52, has no frame of gold, no jewels, it displays no art or artifice other than the skill of an anonymous calligrapher. It hangs securely inside a clear Perspex box, in a dimly-lit wood-panelled room. There is nothing conventionally exciting about it; it is on a basic level a small tattered fragment of papyrus, of a vaguely tea-stained colour.

The text, written on papyrus in Greek, and translated in 1935 by C H Roberts in the Catalogue of Greek and Latin Papyri in the John Rylands Library, comes from the New Testament gospel of John. John was the youngest of the apostles, and his  references to himself as Jesus’ ‘beloved’ disciple suggests a close friendship.

The narrative concerns John’s first-hand account of  the arrest of Jesus and his appearance before Pontius Pilate, the governor general of the Roman province of Judea, and subsequent interrogation. It is the pivotal text between the evangelising, miraculous Christ, and the events that ultimately lead to his crucifixion and resurrection. The words in bold (in their English translation) are what survive in the original document.

the Jews, “For us it is not permitted to kill
anyone,” so that the word of Jesus might be fulfilled, which he sp-
oke signifying what kind of death he was going to
die. Entered therefore again into the Praeto-
rium Pilate and summoned Jesus
and said to him, “Thou art king of the
Jews?”

a King I am. For this I have been born
and (for this) I have come into the world so that I would test
ify to the truth. Everyone who is of the truth
hears of me my voice.” Said to him
Pilate, “What is truth?” and this
having said, again he went out unto the Jews
and said to them, “I find not one
fault in him.”

What is remarkable about this text is the date some paleographers have put on it. It may be as early as 100 AD, only some 70 years after the death of Christ, making it the oldest datable fragment of the New Testament in existence.

The gospel’s author, considered by many to be the apostle John, is thought to be the longest-lived of all the disciples, possibly surviving  well into his 90s. Scholars disagree as to whether the gospel we now have was written by John himself or by someone transmitting his teachings within decades of the apostle’s death. Whoever the author, he would have dictated to a professional scribe. Scrolls were expensive and writing on them needed an expert.

Whatever the exact time frames, we may well be looking at a first-hand account of the last days of one of the most remarkable and influential men the world has ever known.

And the words continue to reach through the ages as a tangible bridge between the very dawn of Christianity and Christianity in the 21st century.

It is a captured moment of real time, made even more immediate by the supporting evidence. The power is in the fact that we might be reading something that may have been related by the apostle himself, the actual eye-witness, or by his disciple.

The likelihood of such proximity to Christ is powerful stuff. It may be as close as many of us are ever going to get to the historically real Messiah.

“What is truth?” Asked Pilate as he interrogated Jesus. That’s a good question to ask in relation to relics. Does it matter if the provenance of one object is suspect in contrast to the forensic certainty of another? I’m not sure if it does. After all both objects ultimately succeed in their intention which was always to bring the observer closer to the individual represented.

Christanity is a faith which believes that God actually took on flesh, so matter has always mattered. The Bible recounts how one woman proactively sought out Jesus and was even cured by touching the hem of his garment. Later on, it is told that the apostle Peter – as one who had spent three years in Christ’s presence – could heal through his very shadow.

Relics can be misused or false ones can be presented as true. But if our mediaeval forebears gave them such importance, it wasn’t out of foolish superstition. Rather there was good theology there, the understanding that God transmitted his holiness through a human body and material objects and can still do so throughout history.

There was also a profound understanding of human nature inherent in this, of our psychology, linked to our reality as rational creatures of flesh and blood. We like to touch, we are a tactile species, we want to seek out and find fragments of the great and good, it aids our understanding, it takes us to them.

And without question something of the potency survives within these very different objects, combining great beauty, realism and a powerful message, that can speak as eloquently to a secular world as to a religious one. There also remains within them something decidedly ‘other’. The possible proximity to events that defy rational explanation offers an opportunity to re-enchant a world that has become curiously dis-enchanted.