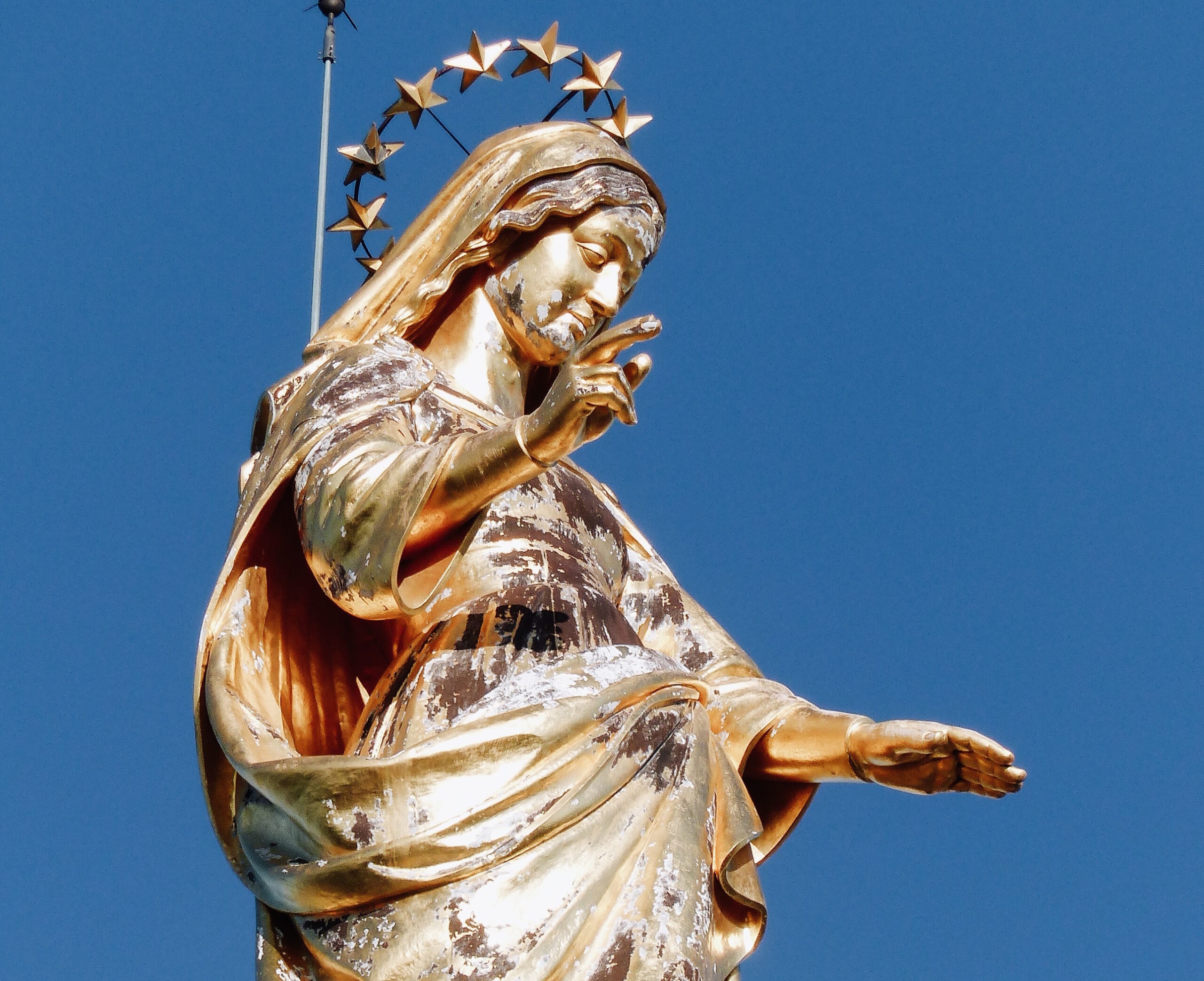 To mark the Christian feast day of the Assumption, Carolyn Morrison reflects upon how the Virgin Mary’s epic journey into heaven has been celebrated and portrayed in art.

The feast day of the Assumption of the Blessed Virgin Mary, which falls on 15 August, has been celebrated in one form or another since the earliest years of Christianity.

It is an important feast also because it defends the dignity of womanhood by showing how Christ’s work of salvation led to the exaltation of one woman in particular, Mary the mother of Jesus.

The veneration shown to Mary has always been an important part of the defence of the dignity of women: a woman is shown to have a key role in human salvation and is raised to heaven body and soul as a result.

The doctrine simply states that Mary, at the end of her life on earth, was taken body and soul to heaven. Given that, according to Christian faith, when we die our soul and body are separated and we only receive the latter back at the end of time, this is no mean belief. Our bodies corrupt because they have been harmed by the corruption in our souls. But as Mary did not sin, her soul and body did not suffer corruption and so both are free to go directly to heaven.

What is not widely known, however, is that this long-held belief was only officially declared a tenet of the Catholic faith in the middle of the last century. This was, in part, due to the fact that there is no reference to the assumption of Mary in the Bible. However, as St Augustine wrote:

“Regarding those other observances which we keep and all the world keeps, and which do not derive from Scripture but from tradition, we are given to understand that they have been ordained or recommended to be kept by the Apostles themselves, or by plenary councils, whose authority is well founded in the Church ….”

So, after being besieged by individual believers and theologians and having found support in the writings of the early Church Fathers, in 1950 Pope Pius XII issued a decree entitled Munificentissimus Deus in which he states, “we declare, and define it to be a divinely revealed dogma: that the Immaculate Mother of God, the ever Virgin Mary, having completed the course of her earthly life, was assumed body and soul into heavenly glory.”

Yet, the long delay in declaring the Assumption as part of Church teaching did not deter theologians, preachers and artists from describing and depicting the nature of Mary’s journey into paradise for many centuries before the Pope got round to defining it.

In fact, the Assumption is the most celebrated Marian feast to be portrayed by artists in art history.

In the early Renaissance period Jacobus de Voragine’s book, The Golden Legend, was a great source of inspiration and creativity for both preacher and artist alike. Voragine’s detailed accounts of the lives of the saints provided them with the material they needed to transform their homilies and works of art into transcendent statements about hope and beauty.

According to the early Church Fathers the manner of the Virgin’s assumption fell into three distinct principal moments, namely her falling asleep/death (dormition), her rising to heaven (assumption), and her enthronement (coronation). The Golden Legend elaborated on the three primary occasions by subdividing them into six successive episodes:

The Annunciation of the Virgin’s death; the beginning of her assumption

The Virgin’s farewell to the Apostles

Mary dies, and Christ appears to takes her soul to heaven

Mary is crowned Queen of Heaven and Earth; the completion of her assumption.

The legendary narrative of the Assumption begins with the annunciation of the Virgin’s death. In the top left hand panel of Duccio’s Maestà the angel Gabriel is depicted on bended knee, greeting Mary with a palm frond. He tells her that her life on earth is drawing to an end – in three days time she will be reunited with her son Jesus. Mary’s openhanded gesture signifies to the viewer that she welcomes the news that the angel brings.

Both portray Mary at prayer and alone when the angel Gabriel appears. The noticeable difference lies in the iconography. In the first instance, Gabriel presents Mary with a stem of lilies, whilst in the latter she is given a star-studded palm. This palma mortis is both an emblem of death and a symbol of eternal life, which signifies to the viewer that Mary, like Jesus, will reign victorious over sin and death.

The second stage of the assumption narrative depicts the sudden arrival of all the Apostles, except Thomas. The Golden Legend describes the disciples as being transported on clouds from their various missions to the portico of the Virgin, hence they are in two places at the same time, a phenomenon commonly known as bi-location. On arrival St John the Evangelist immediately rushes into the inner porch to pay his final respects to the Blessed Virgin. Duccio eloquently captures the sheer joy and amazement on the faces of the other disciples, who are still outside the portico, busily greeting each other with great enthusiasm. In the window behind Mary we see the palma mortis, which St John will carry in solemn procession at Mary’s funeral.

The next development in the assumption narrative is marked by Mary’s falling asleep, and the arrival of Jesus who comes to take her soul to heaven.

In Fra Angelico’s depiction of the dormition we see Christ tenderly holding a full standing figure of Mary’s soul in his arms.

This was a major development in art history, as Mary’s soul was usually portrayed in the form of a child. On the far right of the painting St John the Evangelist is seen faithfully holding the palma mortis.

The fourth stage of Mary’s assumption into heaven is illustrated by the Apostles marching in solemn procession to the place of her rest. According to the Golden Legend, on the way a chief priest, by the name of Jephonias, tries to dishonour Mary by attempting to grab the coffin in order to burn it. Such a depiction is suggesting that the  Apostles would have seen this as a sacrilegious act towards the Christian community, because cremation was seen by the medieval Church as a denial of the belief in the resurrection of the body.

Notwithstanding that, Jephonias’s plan to burn Mary’s remains was thwarted when his hands withered and became stuck to the bier. Hanging from the coffin he calls out to St Peter for forgiveness. He is finally freed when he confesses that Jesus is Lord and Mary is the mother of God! In other depictions of the Virgin’s funeral a more gruesome fate awaited Jephonias. Michael the Archangel suddenly appears and cuts off the chief priest’s hands; happily Jephonias repents and his hands are miraculously restored.

The Tondo’s Madonna della Cintola depicts the assumption of the Virgin with St. Thomas, who was missing from the farewell scene of the Apostles in stage two. In this account of the assumption there is a real sense of movement. Thomas witnesses Mary being assumed into heaven escorted by a choir of angels, and surrounded by the blessed. As a sign of her assumption Mary drops her cincture, which had been placed around her waist by three holy women on the day of her burial. Thomas hurries back to the disciples with the girdle in hand as proof that the Blessed Virgin has been assumed into heaven. The disciples rush back to the tomb to discover that Mary has vanished.

On her arrival in paradise Mary is crowned Queen of heaven and earth, which marks the completion of her journey. Fra Angelico depicts Mary gently bowing her head to receive the ‘crown of righteousness’, a reward that all the faithful hope to obtain.

It is important to remember that sacred paintings functioned largely as aids for the instruction and encouragement of ordinary believers, many of whom would have been illiterate.

Mary’s assumption into heaven is ultimately seen as confirmation of the resurrection of the body and soul, an uplifting sign of the hope of things to come.

Belief in the Assumption of Mary is very dear to me as a member of a Catholic community, the Religious of the Assumption, which focuses particularly on this event. Founded in Paris in 1839 by Anne Eugenie Milleret and Fr. Theodore Combalot, my congregation aims to work for the transformation of society through the education of girls and women.

For us the exaltation of Mary offers us hope for the exaltation of every human being, especially women. Although this exaltation will only achieve its fullness in heaven, it can begin and grow on earth. Thus we aim to promote the dignity – the glory – of every person and I see my love for art as part of this mission. Art, particularly the great tradition of Christian art, both celebrates the glory of the human person and points us towards the full glory awaiting us in heaven.