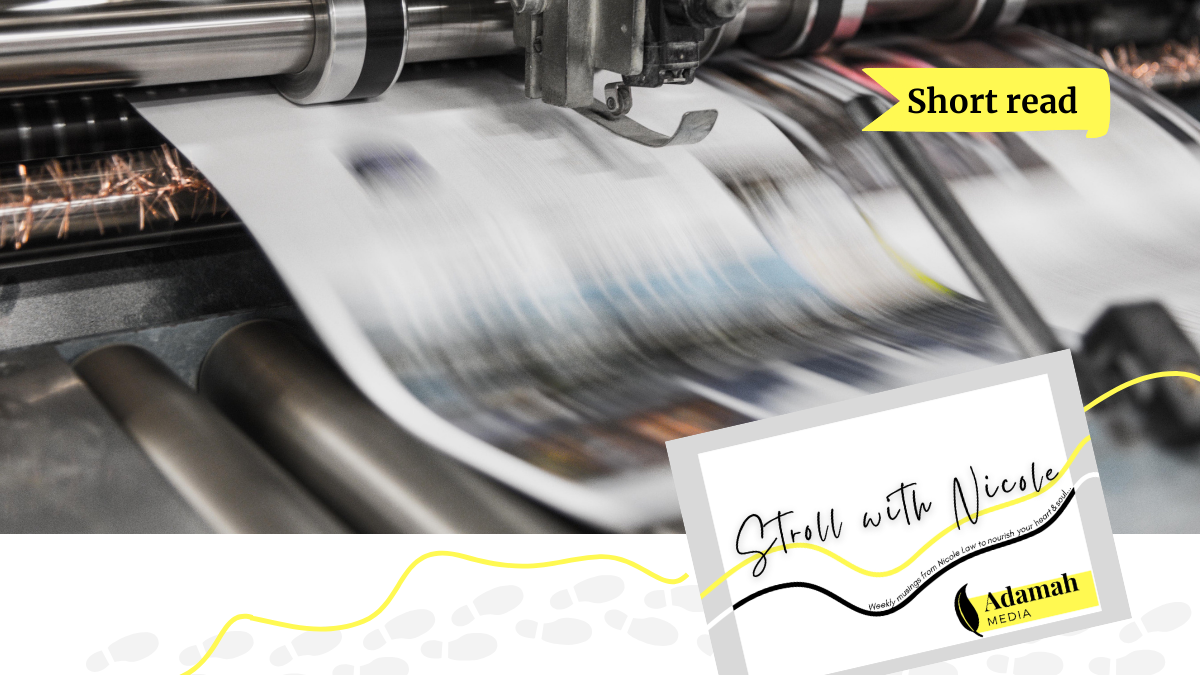 Nicole Law calls for readers to adopt a healthier diet of news and opinion.

We live in a media-saturated world. Probably for most of us the day’s routine begins groggily stretching out an arm for the phone.

For some that means scrolling through the latest headlines to get up to speed with global developments, an endeavour some might consider futile given the dynamic nature of news.

Others go first to their messages. Yet others start the day with the tittle-tattle of their preferred social media platform.

However we ‘consume’ our media, it is clear that news (be it serious or drivel) plays a key role in our lives, even if we choose the path of passivity when it comes to issues of national or international importance.

Even those who never buy a newspaper or watch a news bulletin absorb values and ideas by a kind of information osmosis.

Add to that the spectre of misinformation – like chain messages on Whatsapp groups perpetuating false claims about the efficacy of treatments for Covid or purported acts of violence committed against persons – and we have a toxic mix of opinion and fact to digest on a daily basis.

All of this raises the question – what is the role of the free press in such a landscape? For Reporters Without Borders (RSF) Secretary-General Christophe Deloire,  “journalism is the best vaccine against disinformation.” Some cynics would argue that journalism is often a cause of disinformation.

Misinformation can be cleared up by consulting various authoritative sources on the subject in question – for example, medical professionals or medically approved journals can be used to check the facts of the latest pandemic narrative (if you have time!)

Yet, it is important to note that information itself is not merely a set of ‘facts’ that do not invite challenge. Much of the information we receive on a daily basis has passed through multiple filters intended to shape a specific type of perspective and elicit a specific type of response before it reaches our newspapers or mobile phone screens.

I learn about what is going on in the world through access to international news agencies, yet I am aware that the news which presents itself as an objective reporting of factual events is never truly ‘objective’.

Indeed, even when the news source sincerely aims at objectivity in a particular report, it has already made the choice to focus on this issue and not another. The selection of what one chooses to cover or not is already a subjective choice.

Media organisations themselves exist within a larger institutional structure of business and politics and the relationship between the free press and governments varies from country to country. In some regimes, the press is tightly controlled – a mouthpiece for governmental objectives.

In others, the press has free rein and possesses a greater degree of autonomy when it comes to coverage and tone. But even then, if the media organisation has a particular slant on political or social issues, the journalists working for that entity might find themselves on quite a tight rein concerning what they write.

It is also important to note that this idea of ‘freedom’ is a continuum and there is no neat classification of press systems worldwide. The purpose of the ‘free press’ also varies and shifts, in response to the perception of what such a press should do or might be capable of doing.

The media – print, broadcast and digital – are subject to constant pressures which include both political polarisation and the pandemic of misinformation.

Yet, the more dangerous threat, in my opinion, is disinformation, the deliberate use of the press to shape public opinion or to undermine beliefs which might challenge the status quo, using falsehood as a weapon.

The author deliberately seeks to deceive to bring about a change in society or to stamp on some other attempted change which he or she considers a threat.

The truth remains – an open society begets plurality and this diversity begets a careful consideration of viewpoints of individuals with different sets of priorities and agendas. In such a society the press serves an important communicative role, of both reporting the facts as well as presenting various perspectives to the general public. While the press itself can and does have  an influence on public opinion, it also needs to retain its own sense of identity and purpose.

The press is truest to itself when it represents truthfully what other agencies are trying to achieve and not when it is aiming at its own agenda. Simply telling the truth can bring about great and positive changes.

That proves difficult since press organisations are essentially businesses with shareholders which exist primarily to make a profit. They often struggle to balance the need to make money with the more idealistic desire of effecting change through their business of reporting the news, giving voice to opinions and providing entertainment (another oft-forgotten role of the press).

This conflict of interest has caused some to lose confidence in their national press outlets which are often seen as favouring specific political agendas or being reduced to propaganda.

Yet there are still bright spots despite the storm clouds. The Pulitzer Prize for Journalism is awarded yearly to journalists in various categories and forms the benchmark of professional excellence. This year, Robert Greene of the Los Angeles Times clinched the prize under the category ‘Editorial Writing’ for his work on policing, bail reform and mental health.

It fills me with hope that journalism still possesses the capacity to bring important issues to public attention and spark debate and discussion. The fruits of this debate and discussion are uncertain but the first step has been taken – to get those issues out into the public domain, from which they might otherwise be relegated in favour of dominant or populist narratives.

While the future of the press remains uncertain, its importance to the functioning of societies is undeniable. There is much work to be done on the front of ‘freedom’ – an ongoing struggle that may never be fully resolved. Yet, as consumers of media, we can make conscious decisions to support independent and well-researched news outlets.

In fact, our dollar votes and support can make the difference between a subjugated press and an independent one.

As active global citizens, we should continue to play a role in pushing for a ‘freer’ and more independent press; one which recognises its role as being to fight for the truth, to hold power accountable and to inform voters and strengthen democracy.

These are noble and lofty ideals, but at an individual level, our choices can make the difference. Consumers of media ultimately decide the press they choose to live with. It starts with us.