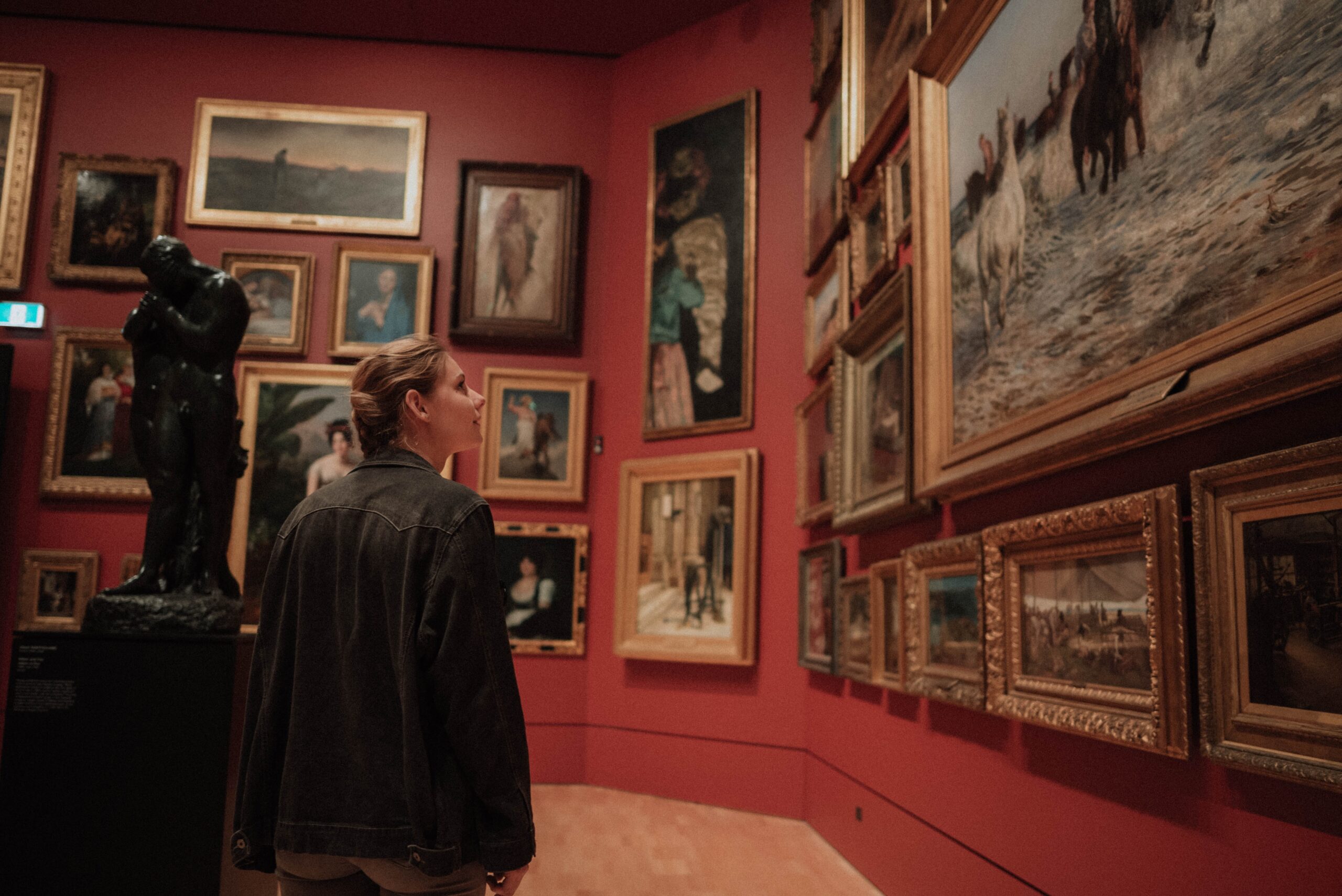 Carolyn Morrison goes behind the canvas to discover the profound meaning in some of the world’s best-known paintings.

How do you express spiritual experience on a canvas? How can paint ever depict the state of someone’s soul? These are questions which artists have grappled with for centuries, but particularly in the Middle Ages and the Renaissance period.

Through a series of techniques, conventions and even tricks, helped by a widely accepted religious vocabulary and in some cases with a dose of extraordinary genius, many artists did at least open a window into religious and mystical phenomena. In our time when computer graphics seem so advanced in their technical proficiency and yet are often so shallow in their psychological depth, those exceptional masters who managed to express so much with so little can offer us a unique insight into the great ‘moments’ of the spiritual life.

Perhaps inevitably, certain dramatic episodes from sacred texts are favoured by artists and their patrons. One of these is marked on the Christian calendar every year on 25 March – the Feast of the Annunciation. This moment when, according to the Bible, the angel Gabriel announced to Mary that she would be mother of God, conceiving and giving birth to God made man, is of enormous significance for Christian faith.

At first glance, representations of the Annunciation in early Italian Renaissance art seem to be almost identical in nature. But take a closer look and you will discover that they were not just variations on a theme, but rather they depict the five successive spiritual and mental conditions or states attributed to the Virgin Mary as described at the start of Luke’s gospel.

According to Micheal Baxandall in Painting & Experience in Fifteenth-Century Italy (1972), artists and preachers in the 1400s worked hand-in-hand, a kind of duet of word and image to explain the great mysteries of the faith to the largely illiterate faithful.

The written word, the spoken word and the painted word were intrinsically interwoven.

In Sandro Botticelli’s Annunciation we see the exact moment of the angel’s opening words to Mary:

“Greetings, you who are highly favoured! The Lord is with you. Mary was greatly troubled at his words …” (Luke 1:28-29)

According to Baxandall, Botticelli’s Annunciation captures the moment of disquiet. The Virgin’s posture and hand gestures seem to suggest that she is holding Gabriel at bay. She appears somewhat aghast. Despite the angel’s greeting of peace, despite his assurance that the Lord is with her, and despite his message that she is greatly blessed by the Lord, Mary is deeply troubled at his words. Could it be that she is not quite convinced by the Angelic Salutation? Fra Roberto tells us that,

“This disquiet, as Nicholas of Lyra writes, came not from incredulity but from wonder … She in her humility was astonished and amazed.”

On the level of spiritual emotion, the Virgin is experiencing fear and reverence of the Lord, which Christians believe to be the foundation of all wisdom. In this painting Botticelli is inviting the viewer to emulate and mirror Mary’s response of disquiet, her piety. By modelling their responses on that of the Blessed Virgin they too will grow in holiness.

However, such depictions of the moment of disquiet were not popular among the vast majority of Renaissance artists. As Leonardo da Vinci writes,

Reflection
The Annunciation by Fra Carnevale, c. 1445-50, Egg tempera on a wooden panel,
The National Gallery of Art, Washington DC

Fra Roberto tells us that the second Laudable Condition of the Virgin is called Reflection. Returning to the Gospel narrative, we see the exact moment that the artist Fra Carnevale is attempting to capture in his depiction of the Annunciation.

“She wondered what kind of greeting this might be. The angel said to her, do not be afraid, Mary; you have found favour with God. You will conceive and give birth to a son, and you are to call him Jesus…” (Luke 1:30-32)

In Fra Carnevale’s depiction of the Annunciation we see that the Virgin has moved from a state of disquiet to one of reflection. She has been calmed and reassured by the Angelic Colloquy, “Do not be afraid, Mary.” Her posture and hand gestures have changed position. Her right hand now rests upon her heart, while her left is placed upon her womb, signifying a state of reflection.

The vase of flowers is a symbol to the viewer that she is a virgin. Gabriel is on one knee. He holds a stem of lilies in his hands, as a sign that her virginity will remain intact. The Holy Spirit, represented in the form of dove, is seen in the distance descending from on high. It is issuing golden rays of light in her direction in anticipation of her fiat, her yes to God. Yet for now, at this precise moment, the artist captures Mary in a state of reflection as she ponders the proposal. As St Bernard of Clairvaux wrote, ‘the whole world awaits Mary’s reply’.

In a painting of the Annunciation by Filippo Lippi, the Angel Gabriel is now in an upright stance, gathering up his cloak as if he has just risen from kneeling. If we look closely we see that the Virgin Mary’s mood has moved from one of reflection to one of inquiry. This is reflected in the position of her left hand. It is held aloft, which signifies inquiry, almost the posture of a student asking a question in a lecture! For Christians, Mary is seen as the ideal model of a person of good faith. She is not afraid to ask questions. As the sacred text tells us,

Mary inquired of the angel, “I am a virgin. How, then, can this be?”

It is this exact moment within the Angelic Colloquy that the artist has captured. The Virgin’s condition is laudable, that is praiseworthy, because it is good to have a faith that inquires. The motto ‘faith seeking understanding’ is considered as one of the classical definitions of theology. This is based upon the Christian belief that the God revealed in Jesus Christ prompts a questioning search for deeper understanding on the part of the believer/viewer. God wants the believer to ask questions.

In order to understand representations in art of the moment of submission, we need to return to the Gospel narrative. After Mary had inquired “I am a virgin. How can this be?” The angel answered, “The Holy Spirit will come on you, and God’s power will rest upon you. For this reason the holy child will be called the Son of God.”

Fra Angelico’s depiction of the Annunciation has captured the exact moment of Mary’s response,

“I am the Lord’s servant, may it happen to me as you have said.”

In the fresco we see that Mary’s posture has moved from the state of inquiry to one of submission. Mary is depicted in a kneeling position (sometimes sitting), her arms crossed, her head bowed. She has submitted herself completely to the will of God and His Divine plan of Redemption.

The Angel has just received Mary’s answer, her fiat, which quite simply means yes, or more literally, ‘be it done’. The theological significance of Mary’s submission, her fiat, is important because it leads to the birth of Christianity. Art, like faith, invites the viewer/believer to participate in the scene. Here Fra Angelico is inviting the viewer to contemplate the virtue of obedience to God’s will.

Yet, it is always the free choice on the part of the viewer to either take a fleeting glance or to fix his or her gaze.

Fra Roberto tells us that the last of the five Laudable Conditions of the Blessed Virgin is Merit. Returning to the Angelic Colloquy we see the exact moment that Fra Angelico is attempting to capture. It is contained in the very last sentence, which reads,

“And the angel left her.”

Depictions in art of the Virgin on her own belong to the type called Annunciate rather than Annunciation. Like the Annunciation Fra Angelico’s Annunciate portrays Mary with her head bowed in submission, her arms remain crossed but she is now alone. She clasps a book of prayer in her left hand, her index finger holds the pages of the book ajar, pointing to the word of God. Her stomach is slightly swollen, she is with child. The Virgin has believed the message of the angel. Thus her state is praiseworthy, laudable and meritorious.

The five successive Laudable Conditions of the Blessed Virgin are now complete. Mary’s response to the Angelic Colloquy is considered to be a model of faith that all Christians are called to follow.

Mary’s ‘model of faith’ can therefore be summarised in five steps:

Disquiet – fear of the Lord – wonder and awe

Reflection – on what God is asking the believer to be/do

Inquiry – how can this be? Since such and such …

Merit – doing God’s will is laudable, praiseworthy and meritorious.

The most popular depictions of the Annunciation in early Renaissance art were the moment of submission, which was closely followed by the moments of inquiry and reflection. Fewer paintings remain, or ever existed, of the moments of disquiet and merit.

The next time that you visit an art gallery, see if you can work out which of the moments the artist is alluding to within the Angelic Colloquy. It might also help you to reflect on your own state of soul, a reflection which every medieval and Renaissance artist sought to provoke.