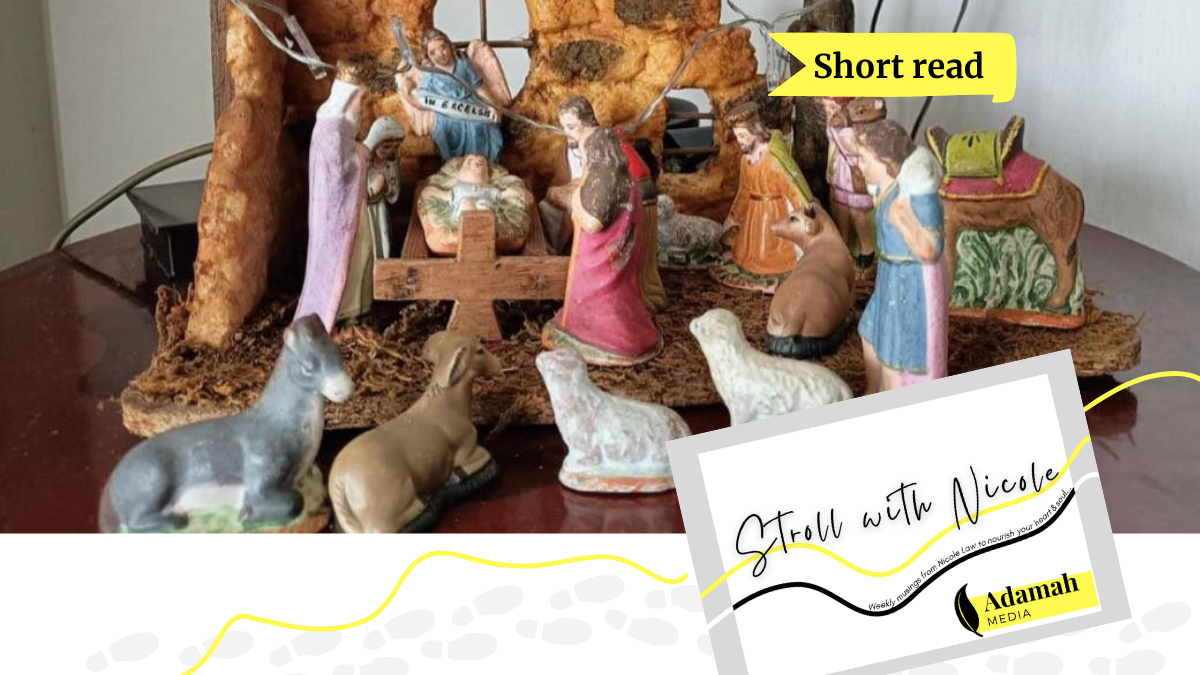 Nicole Law reflects on the challenges facing humanity as she sets up her Christmas crib.

I set up the Nativity scene in my home a few days ago – a set of figurines that depict the characters of the biblical story of Jesus’ birth in a manger. The figurines themselves are well-worn from years of use, yet I love the rustic charm of this set which has been handed down for generations. An invisible thread connects me in the present to relatives from generations before.

It also puts me in a reflective mood as I rearrange the little figures: a woman with head bowed and dressed in blue is Mary, Jesus’ mother; a man similarly kneeling and bowing situated close to her is Joseph, Jesus’ earthly father; and all around the thatched manger are kings from the East, shepherds holding their staffs and various animals nestled in the hay.

Looking at this scene I observe the various characters in the larger story of Christmas and realise how enduring the message is. These kings who have come from far-off lands to see the baby who has been heralded as the Messiah – they do not share that belief culturally, yet they have brought precious gifts to offer to him. It speaks of the respect these men had for something or someone they did not necessarily understand.

In a society fraught with division and strife, the three kings represent what it means to be tolerant of those with beliefs different from our own and the need for mutual respect among religions.

We talk of pluralism and constantly exhort its importance, but perhaps we can learn much from the quiet example of these truly wise men. Their silent presence in my crib reminds me to regard the ‘other’ with respect and reverence.

I think of the times I have entered various places of worship in Singapore; I have visited Muslim mosques, Jewish synagogues and Buddhist or Hindu temples. In these experiences, though I may not have fully understood the beliefs held by these different religious groups, I took off my shoes, washed my hands and respected the religious icons and customs.

Of course, there are larger forces in play in the world today as we witness conflict in various nations along the divisive lines of race and religion. Yet, perhaps the three kings remind us that peaceful co-existence starts with a sincere intention to respect and understand those different from ourselves.

Their journey also teaches me that the search for religious truth requires authentic self-sacrifice. These men – who might have been considered insane by their peers when they set out – were ready to leave a great deal behind to follow the star, that heaven-sent sign they felt compelled to follow. If only we sacrificed ourselves more instead of doing violence to or judging others, then peaceful religious and social harmony might not be so hard to achieve.

Close to these richly-robed king figurines in my crib-set are the shepherds. The shepherds were migratory by the very nature of the work. They did not take root in one specific place. And Jesus and his parents were also migrants, as they had to travel from one town to another as part of the population census at the time and take up residence in the stable of an inn as there were no rooms left that night in the hostel. Their relentless search for a ‘home’ illuminates the wider struggle of migrants worldwide – those fleeing oppression, natural disasters and political upheaval in their home countries.

My crib scene reminds me of the xenophobia that is not unique to one country – we fear the arrival of ‘alien’ peoples and as the inn-keeper closed his doors to the Holy Family, we close our borders … and in the process our very hearts.

Migration has always been a feature of human development and I realise that far too often we have been so ensconced in our own bubbles of privilege we have failed to glimpse the struggle of those ‘outside’. It is a strange thought given that in our own ancestral lines someone along the way has moved from one country to another to seek a better life.

Many residents in my native Singapore have ancestors who moved to this country from surrounding Asian nations such as China and India. Yet, in 2021, there is an undeniable xenophobia shown to persons migrating to Singapore and an unhealthy ‘us versus them’ mentality seeping into the national consciousness.

The shepherds and Jesus’ parents were turned away by innkeepers and yet found refuge in a stable  – a reminder that we can do better to welcome and embrace the stranger in our midst and in doing so find ourselves welcoming God.

In the tiny stable I glimpse the forces that continue to shift in our world and feel a deep resonance as I move the figures once again. Maybe I do possess the ability to change the world … one figurine at a time.

Enjoy this article? Would you consider supporting us financially? Click here to donate to our Crowdfunder, you will help us to provide paid opportunities for young writers.