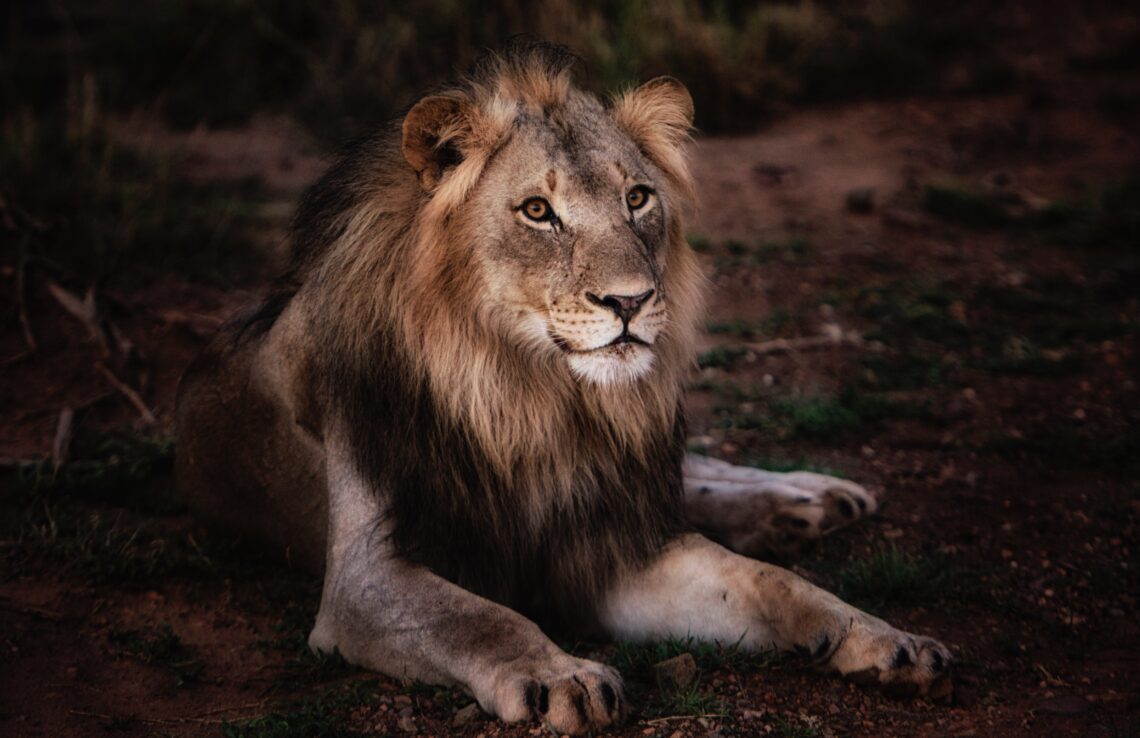 Lisa Fraser looks at the king of the jungle in art, history and literature and finds they are more complex beasts than we may realise.

Even though I grew up in mainland Europe, I have memories of lions from as early as I can remember.

One of my first childhood recollections is of me painting a gold lion almost as big as myself on a vermillion silk canvas. My artwork was a symbol of my loyalty to an adult whom I considered like family. It was also the emblem of the city where we both lived, rooting us in shared territory.

I fell out with lions in secondary school, when I studied the fables of La Fontaine: in these the lion represented the abusive monarch, greedy, and uncaring towards his people. I also realised that lions actually killed other animals, and I sided with the weak, with the prey.

In the 90s, lions were mostly rallying symbols for alpha males. The MGM lion embodied this concept of exclusive, dominating masculinity, roaring since the 20s and looking outdated to my childish eyes. I lost interest in lions for many years.

But my passion was rekindled recently when a friend shared a picture of the Lion Statue in Assisi (a place always associated with peace, thanks to its link to the great saint of that town, Francis, a famous peacemaker). This is said to be one of the oldest statues in Europe. Looking at the photograph, I felt overwhelmed by the rootedness, composure and strength of the animal. What was so special about lions that they’ve captured the imagination of artists across the globe for millennia?

Other animals like deer and antelopes actually appeared much earlier in art history. Lions are barely painted in caves during the Palaeolithic age. Artists started representing them during Roman times, when depicting gladiator fights. One of the oldest representations is the  carnelian intaglio (a small print on a red, round material), which shows a gladiator fighting a lion in the 1st century AD.

Lions have been historically present in artworks across all cultures, even in countries where they did not exist as a native species.

In Japan, they appeared under the name of komainu, meaning both Korean dog and foreign dog, during the Nara period (8th century).

Lions became less common in the arts at the fall of the Roman Empire, but they made a comeback in the Middle Ages. At that time, artists barely travelled and could not study lions; but far from being deterred, they used dogs as models!

Due to the lack of direct knowledge, all sorts of beliefs developed. Bestiaries (popular mediaeval books of beasts, with illuminated texts) gifted lions with magical powers, wings, tongues of fire, and even cheeky smiles.

Even in cultures where lions were present, the difficulty of studying them closely led to the development of mysterious legends. For instance, some African cultures thought that lions were shape-shifters seeking to seduce women.

Beyond these popular beliefs, kings appropriated the figures of lions from early ages. The palace of King Nebuchadnezzar of Babylon was said to be guarded by lions – actually, they were most likely statues of lions…

In recent years, anthropological studies have allowed us to understand better how lions behave in their natural habitats. The most recent representations of lions have explored their interactions with their prides, their ecosystem, and the impact that humanity has had on their survival. This greater knowledge has influenced the artistic depiction of these creatures. Thus, lions in most contemporary artforms have weaknesses and are preyed upon. Who hasn’t cried when reading Kessel’s novel The Lion?

This change also reflects how society is reviewing the alpha-male model, trying to develop new ways of expressing masculinity. Yet, lions remain mostly seen as male figures, as has been the case through history, apart from rare exceptions (like the Egyptian goddess Sekhmet, whose name means ‘power’).

Their representation in art is probably evolving faster than popular imagination, where lions remain kingly figures in most cultures – in Swahili, lion even means king (simba).

Yet, in recent decades, the public has praised stories looking at the making of a lion: how can a cute kitten turn into the Jungle Emperor?

Lions can act as the classic protagonists of coming-of-age stories, where children learn how to channel their inner strength to become inspirational leaders. The global hits of this genre were Kimba the White Lion, the Japanese shōnen manga series by Osamu Tezuka, and Disney’s Lion King.

These stories are empowering … and they can teach us all (young and not so young!) to deal with grief. Becoming an adult and taking over the position of Jungle Emperor (or whatever the equivalent is in our life) requires the ability to let go of our past, and to leave our childhood family to build our own life, away from our parents.

Moving, isn’t it? Transposing the situation into sun-bleached landscapes, with exotic animals and stunning scenery, might be an artistic way to make grief more bearable. This is the modern, feel-good version of the lion. Yet, the jungle and the savannah are far from the idyllic world we see in Disney’s film. Historically, the representations of lions have been more nuanced, full of ambiguities.

In past centuries, artists were not afraid of exploring the other characteristics of the lion figure, like domination, violence, and ‘eat or be eaten’ types of behaviours. Historically, lions were often painted fighting with other beasts, like dogs (symbolising loyalty to the human race, the ‘good fight’), wolves or bears (symbolising the fight among equals, rivalry between empires).

Paradoxically, during the same period, the Middle Ages also associated lions and saints, a strange association since Roman Emperors memorably persecuted Christians by throwing them to the lions!

Centuries later, mediaeval Christian artists felt inspired by lions’ strength and alleged passionate nature, and came to the conclusion that these traits could be used as a force of good. Indeed one of the gospels, that of Mark, is traditionally depicted as a lion – a symbol very familiar to anyone visiting Venice, where the lion of St Mark (the city’s patron) is omnipresent.

Gradually, lions came to represent the metaphorical fight against sin and evil.

This was also the time when kings and lords started using lions in heraldry. The aim was both to impress enemies by projecting the image of the bold, strong warrior and to inspire domestic armies towards victory. The coats of arms of Scotland, Norway and Belgium are beautiful reminders of this with their lions rampant.

In architecture, lions were also used to remember significant battles and honour the bravery of fallen warriors. For instance, the Lion de Belfort in France commemorates the town’s resistance to the siege laid by the Prussians during the Franco-Prussian war of 1870.

Lions fascinate artists because of their dual nature: the coexistence of both good and evil; the option to use strength and the choice to restrain it; the ability to protect and to destroy in equal measure. For these reasons, lions are good models to explore concepts like moderation and justice.

Anthropomorphic tales (stories that assign human characteristics to non-human entities) often describe wild beasts like wolves and hyenas as fickle, vicious, and lacking moral values. Lions, on the contrary, are seen as composed, reflective, and even able to act virtuously. They could let loose their powers and create chaos, but they choose to restrain their instincts to promote order and harmony instead, only resorting to force as a  last resort.

They therefore symbolise control over our animal pulsions, in favour of a greater good – no wonder popular imagery associated lions with theological virtues like temperance and chastity.

This concept of restrained strength appealed to kings willing to be seen as morally good. By using this emblem, they were putting themselves forward as defenders of the vulnerable, the widow and orphan. For instance, King Arthur was often represented as a crowned lion. More recently, J. K. Rowling chose a lion to represent Gryffindor, the house of ‘the bravest and the boldest’ in the Harry Potter novels.

Gryffindor is also distinctive for attracting individuals seeking to do good together. As the only cats living in groups (prides), lions have been praised for their ability to maintain harmonious relationships and group dynamics. They are seen as loyal and protective of their loved ones. In the Oz books, the anti-hero, the Cowardly Lion, is stripped of his strength, but ultimately, in essence, he remains devoted to his friends.

Paradoxically (lions are great figures for those who love paradoxes!), people can be attracted to the image of lions because of their superb aloofness.

Most iconic paintings represent lions as solitary beings: they’re roaming in splendid isolation (like Landseer’s Study of a Lion and The Desert), or they are shown looking over a vast land, on their own, atop a hill (think of Disney’s Lion King poster). Their patience and composure seem almost to put them on a higher level of existence, above the passions and tumults of this world.

Historically, architects used them as gatekeepers, quietly watching over us, ready to defend us against evils. You’ll find ornamental lions at the entrances to the oldest of cities, sacred spaces and seats of power. For instance, Shishi (guardian lions) have been watching over Chinese imperial palaces and tombs for centuries.

In some cases, the gatekeepers have lasted longer than some of the civilisations which created them. What patience it takes to be a Sphinx at the entrance of Egyptian pyramids these days, now all the Pharaohs have left!

These majestic artworks have reinforced the lion’s reputation as an eternal being, greater than our earthly lives. Some cultures even believe that deities have used lions for their incarnation on earth. In Hinduism, God Narasimha (meaning Lion-Man), an incarnation of the god Vishnu (part-human, part-lion), is responsible for the destruction of evil. In literature, the Christian writer C. S. Lewis used the figure of a lion, Aslan, as a God-figure waiting to welcome us to heaven, filling generations of readers with hope.

For all this, it is striking how little Jesus is represented as a lion in the Bible and in subsequent Christian literature. In one place in the New Testament he is depicted as ‘the lion of Judah’, but apart from that, he is invariably described as a ‘lamb’, a peaceful animal sacrificed for the good of others.

The representations of lions through art help us reflect on what it means to be fully human, with our ability to do good and our temptation to unleash our anger; our spiritual side as well as our corporeal nature; our desire for solitude and our devotion to our loved ones.

Lion figures help us explore our passions and to accept the need to restrain them for the greater good. They symbolically show us a way to embrace our complexity and to become rulers of ourselves. Maybe that’s how, one day, we’ll become the emperor of our own jungle.