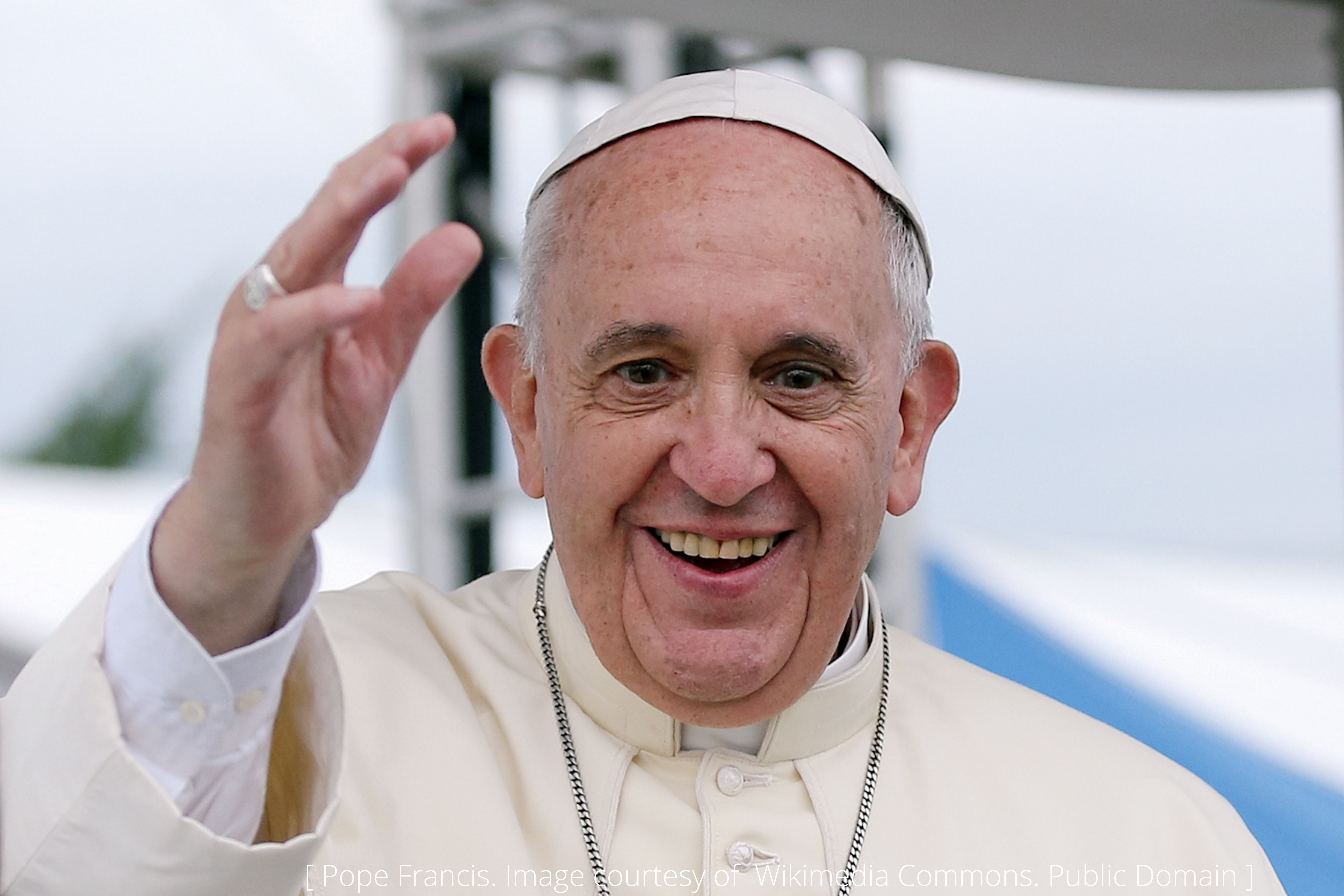 A roadmap for dialogue between religions with a relevance beyond the Middle East may be the lasting legacy of Pope Francis’ visit to Iraq, writes Ronnie Convery.

If a picture paints a thousand words, there are few greater artists than Pope Francis.

I remember chatting with an American journalist in Rome who often follows the Pope on foreign trips. “Which is he?” I asked. “The elderly slightly bumbling parish priest of the world who sometimes says things wrong, or the wily communicator who understands every gesture and its impact?”

She smiled.  “Absolutely the latter,” she said. “You can see him change posture, facial expression, when he wants to give a signal, and he knows how to use ambiguous language just as well as he does precise terminology. He is a Jesuit, after all …”

Such communication skills were much in evidence last week during Francis’ highly publicised visit to Iraq, his first foreign trip in over a year. The Pope was determined that neither the Covid pandemic nor major security concerns were going to deter him from making the trip.

A suicide attack in a Baghdad market in January had killed 32 people and only two days before the Pope was due to set-off, 10 rockets were fired against an airbase housing Iraqi, US and coalition forces. But the Pontiff still went, calling the visit ‘a duty towards a land that has been martyred for so many years.’

Certainly, the journey was an act of solidarity with the beleaguered and dwindling Christian community in that land, but through a series of symbolic gestures and powerful speeches Francis opened up what might well be a firm and lasting path to greater understanding between world religions.

There are two particular standouts from the trip.

The first was the picture of the Argentinian Pope with an Iraqi cleric which landed in newsrooms, smartphones and front pages within minutes of their encounter.

Two old men. One in black, one in white. Pope Francis, 84, the head of the world’s 1.2 billion Roman Catholics, and Grand Ayatollah Ali al-Sistani, 90, the spiritual leader of most of the world’s Shia Muslims, talked for almost an hour.

Francis took off his shoes to show respect, al-Sistani stood up to welcome his guest, a sign of reverence.

It was a powerful visual sermon to the world that real religion has no truck with violence, fanaticism or terrorism. It was also Francis the visual communicator at his best.

But the message of the trip was not just visual. The power of the word was very much in evidence too as the Pope spoke powerfully and with insight about the need for tolerance and respect among people of faith and the ugliness of religious fanaticism disguising itself as piety or devotion.

“Let us affirm,” the Pope insisted, “that God is merciful and that the greatest blasphemy is to profane his name by hating our brothers and sisters. Hostility, extremism and violence are not born of a religious heart: they are betrayals of religion.”

The speech was all the more important for where it was delivered, in the plains of Ur, where, according to the Bible, Abraham heard the call of God to follow him. And Abraham is considered the father of all three ‘religions of the Book’, Judaism, Christianity and Islam.

My mind flew back to a similar cry of denunciation (on that occasion of the Mafia) from a visibly angry Pope John Paul II in the valley of the Temples in Agrigento in Sicily in 1993. “The judgement of God will come one day,” he thundered in that majestic setting, “Convert now!”

Francis used different words, and his voice was softer, but his message was the same: “We believers cannot be silent when terrorism abuses religion; indeed, we are called unambiguously to dispel all misunderstandings. Let us not allow the light of heaven to be overshadowed by the clouds of hatred!”

Striking too was the Pope’s championing of the rights of non-Christians in Iraq: “In particular, I would like to mention the Yazidi community, which has mourned the deaths of many men and witnessed thousands of women, girls and children kidnapped, sold as slaves, subjected to physical violence and forced conversions,” he said.

In doing so he not only highlighted the pain of a minority but implicitly taught the need for one faith group to show solidarity with others.

As if to hammer home that point, he went on: “When terrorism invaded the north of this beloved country, it wantonly destroyed part of its magnificent religious heritage, including the churches, monasteries and places of worship of various communities. Yet, even at that dark time, some stars kept shining.

“I think of the young Muslim volunteers of Mosul, who helped to repair churches and monasteries, building fraternal friendships on the rubble of hatred, and those Christians and Muslims who today are restoring mosques and churches together.

“It is important to make pilgrimages to holy places, for it is the most beautiful sign on earth of our yearning for heaven. To love and protect holy places, therefore, is an existential necessity, in memory of our father Abraham, who in various places raised to heaven altars of the Lord…”

As a manifesto of religious freedom, tolerance and dialogue the discourse will be hard to beat.

And it was poetic too … “God loves every people, every one of his daughters and sons! Let us never tire of looking up to heaven, of looking up to those same stars that, in his day, our father Abraham contemplated…”

My friend the American journalist would have smiled knowingly as she watched the 84-year-old figure in white use his instinctive communications skills to fly the flag for inter-religious dialogue.

But his call from the plains of Ur has a relevance beyond the Middle East, beyond warring religious factions. It touches the weak point of a crazily divided, hyper-sensitive Western world too, ensconced in its own culture wars and bitter ideological feuds.

Let these words resonate the next time you spit out a tweet of fury, or pen a condemnation of others who do not share your convictions …

“On our own journey, we are called to leave behind those ties and attachments that, by keeping us enclosed in our own groups, prevent us from welcoming God’s boundless love and from seeing others as our brothers and sisters.

“We need to move beyond ourselves, because we need one another. The pandemic has made us realize that no one is saved alone.

“Still, the temptation to withdraw from others is never-ending, yet at the same time we know that the notion of ‘every man for himself’ will rapidly degenerate into a free-for-all that would prove worse than any pandemic.”

For Francis, one of the best ways of promoting better understanding between religions is when the believers of different creeds work together to help heal the common wounds the world is facing, which all have their origin in one way or another in selfishness. He described this selfishness as ‘a real emergency’ and pointed to some of its forms.

“Amid the tempests we are currently experiencing, such isolation will not save us. Nor will an arms race or the erection of walls that will only make us all the more distant and aggressive. Nor the idolatry of money, for it closes us in on ourselves and creates chasms of inequality that engulf humanity. Nor can we be saved by consumerism, which numbs the mind and deadens the heart…”

The Pope insisted that ‘fraternity’ is ‘the most effective vaccine for a future of peace’. And he ended with a plea, an expression of hope, and a call to change …

“From where can the journey of peace begin? From the decision not to have enemies.

“Anyone with the courage to look at the stars, anyone who believes in God, has no enemies to fight. He or she has only one enemy to face, an enemy that stands at the door of the heart and knocks to enter. That enemy is hatred.

“While some try to have enemies more than to be friends, while many seek their own profit at the expense of others, those who look at the stars of the promise, those who follow the ways of God, cannot be against someone, but for everyone. They cannot justify any form of imposition, oppression and abuse of power; they cannot adopt an attitude of belligerence.

“Dear friends, is all this possible? Father Abraham, who was able to hope against all hope encourages us. Throughout history, we have frequently pursued goals that are overly worldly and journeyed on our own, but, with the help of God, we can change for the better. It is up to us, today’s humanity, especially those of us, believers of all religions, to turn instruments of hatred into instruments of peace.”

Whatever one’s level of faith or doubt may be, I suspect we can all say Amen to that.