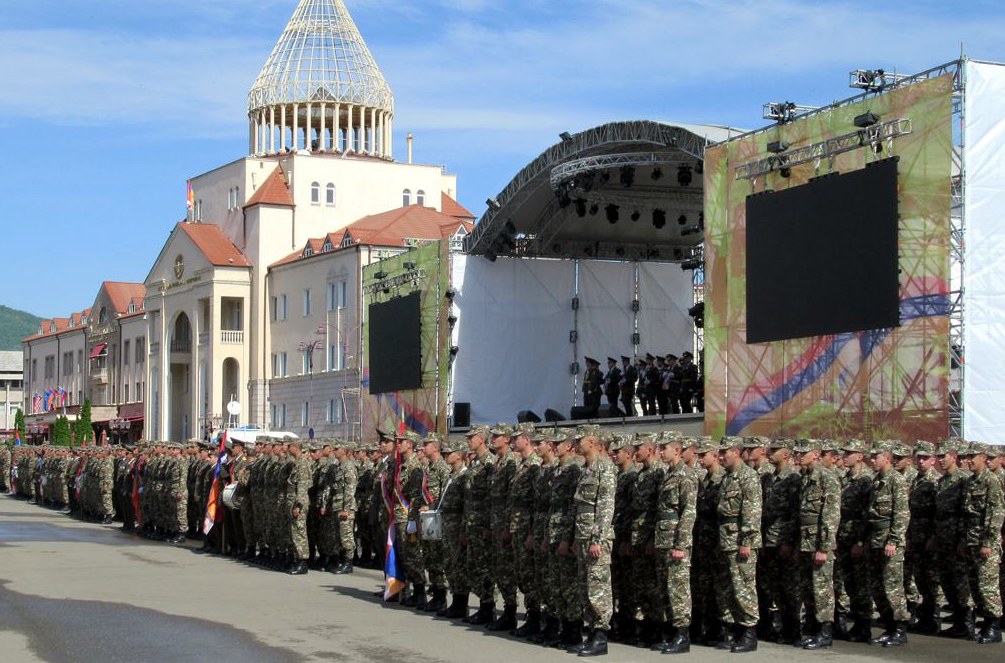 Maddy Fry explores the role of religion in Nagorno-Karabakh, a forgotten corner of the Old Continent where violent tensions run deep.

Three decades ago in Nagorno-Karabakh Armenian soldiers would paint crosses on their tanks. On one level, it was a simple way for them to distinguish themselves from their enemies in Azerbaijan. Yet in a region with such a slippery sense of identity, to the point where years later Google Maps still does not show where its borders begin and end, the significance of such symbols are rarely lost on anyone.

The guns fell silent for a while in the early 1990s after much of Nagorno-Karabakh was overtaken by Armenia in a conflict that left more than 25,000 dead and hundreds of villages destroyed. However hostilities have never been far from the surface. Violence flared up again at the end of 2020 after an offensive launched by Azerbaijan, and the prospect of a lasting solution now seems further away than ever.

The war, as depicted by Western media outlets (when they bother to cover it), has sometimes been described as Muslim-majority Azerbaijan engaging in a ‘clash of civilisations’ with mostly-Christian Armenia.

It is a memorable but simplistic narrative in a world that has never fully shaken off the legacy of the Crusades. Yet ignoring what religion means to those on both sides would be to paint an incomplete picture.

The disintegration of the Soviet Union in the 1980s saw a religious revival in areas that included Artsakh (the historic Armenian name for most of Nagorno-Karabakh), which had once been part of Armenia before being absorbed into the Azerbaijani Soviet Socialist Republic in 1923.

In the absence of any stable political leadership, the Armenian Apostolic Church acted as an advocate for the region at this time and the civilians within it who claimed a separate identity. Many among the Armenian majority saw the Church as a key pillar of a regenerated national life and a sign of Nagorno-Karabakh’s post-Soviet sense of self.

As Oxford academic Hratch Tchilingirian describes it: “The Church was one of the first national institutions that was ‘reclaimed’ by the people, even by those who were unbelievers, as a historically significant source of their religious and national identity.” This was especially so while ‘the prospect of war with Azerbaijan was increasing’.

The First Karabakh War flared up in 1988, with a ceasefire eventually being called in 1994 after Armenia had violently taken over Nagorno-Karabakh and several nearby Azeri provinces. A 1997 agreement with Azerbaijan that Nagorno-Karabakh be granted autonomous status was ultimately rejected by Armenia.

In September 2020 Azerbaijan launched an offensive that saw it retake 70 per cent of the land held by Armenia, including Nagorno-Karabakh. Thousands of homes were destroyed in shelling and drone strikes and at least 6,000 people were killed. Many in Armenia blamed the Prime Minister, Nikol Pashinyan, for agreeing to what they saw as an unjust land-grab at the price of a ceasefire.

Levels of fear and resentment still run high. A 2021 poll conducted by the Caucasus Research Resource Centre in Armenia showed that 72 per cent of respondents did not believe they could co-exist with Azeris. More than half believed that the opening of transport routes in Nagorno-Karabakh connecting both countries was a negative development.

The role of nationalist narratives rooted in a folkloric, highly contested view of history has played a role in both sides’ claim to Nagorno-Karabakh.

Armenians have argued that having an ancient, Christian presence in the Caucasus is proof of the region having always been theirs. A counter-claim by their opponents is that Armenia had culturally obliterated and ‘Christianised’ an earlier civilisation based in present-day Azerbaijan, known as Caucasus Albania, by erasing the inscriptions on ancient monuments and statues.

The relationship between religious leaders and the governments in each country is also complex, particularly as both are officially secular nations. Priests in Nagorno-Karabakh have been known to baptise and offer prayers to soldiers going into battle, describing those who have been killed as ‘martyrs’ and giving nationalist narratives a moral urgency by claiming the land has been granted to Armenia via divine providence.

Many Armenian soldiers have talked about physically and spiritually defending the Church since Azeri forces have been accused of stripping churches of valuable relics and sometimes destroying them outright, as well as vandalising Christian graves.

As Dr Artyom Tonoyan, an expert in religion and politics in the Caucasus, explains: “The Armenian Church sees itself as having a very special task, which is being custodian of the Armenian national soul. It has become an arm of the state because their interests converge.”

From the perspective of the Armenian government, the country has an official separation between church and state. Yet Dr Laurence Broers, Caucasus Programme Director at the London-based peace group Conciliation Resources, said that this ‘doesn’t mean that they aren’t willing to evoke co-religionist sentiments in their struggle to win over audiences to their side. Armenian advocacy and fund-raising in Europe and North America will emphasise Christian solidarity when appropriate.’

Dr Tonoyan highlighted a similar contradictory approach in Azerbaijan: “It is a mostly Shia country but it has a very strange relationship with Islam.The government is robustly secular and doesn’t like wahabis, having curtailed any in-roads by Iran or the Gulf states. However President Ilham Aliyev courts Islamic countries like Pakistan in its fight against Armenia, saying that Nagorno-Karabakh should not fall into ‘Christian’ hands.”

He added that ‘lots of mosques have been named after the president’s father despite his being an atheist, while at the same time Islamic clerics are being jailed as they are suspected of being Iranian spies.’

For individuals, particularly Armenians, the role of religion is an important marker of identity – even for those who don’t practice any religion. While personal declarations of faith as an individual choice might be common in the USA and Western Europe, they have little place in the Caucasus. For many ‘Armenian’ and ‘Christian’ are coterminous words, carrying immense weight even for those who have no belief in religious dogma. Much of this seems to be rooted in a sense of kinship with European culture and a belief that Armenians, when looking eastwards, can see no other Christian, and therefore friendly, presence.

There are other factors at play, ones rooted in realpolitik. The chaos left by the collapse of the Soviet Union led to a reassertion of national identities that were suppressed under Stalin. Weapons and mercenaries flooded in and political opportunism from numerous foreign actors played a key role in sustaining the violence, with proxies from Ukraine, Syria, Chechnya and Afghanistan fighting on the Azeri side backed by the Turkish state.

Both Turkey and Russia continue to have much to gain from using the conflict to extend their influence.

Turkey’s long-term involvement in Nagorno-Karabakh has had global implications; its use of drone technology in the region was believed to have been a dry run for efforts at suppressing Kurdish forces in Syria and defeating General Haftar’s army in Libya. On the Armenian side Russia has provided tenuous support, brokering a ceasefire in November 2020.

Dr Broers asserted that the legacy of the Soviet Union here was crucial, representing both a time when ‘Armenians and Azerbaijanis lived side by side in relative harmony, and an era in which hierarchies and associated resentments were solidified and institutionalised’.

He added: “Russia, as the principal successor to the Soviet Union, continues to play the role of a kind of mediator, while also tying its policy on the conflict to its own agenda and roles – as the Soviet Union also did.”

He further pointed out that both countries have little interest in toning down their stance for fear of seeming weak: “On both sides the conflict is deeply rooted at communal and popular levels, and it has been one of those issues that governments don’t completely control. Compromise has been seen as incompatible with political survival, so governments have done very little to challenge the system.”

A grim peacetime example of this has been the diplomatic deadlock over the removal of deadly landmines covering Nagorno-Karabakh. Both sides planted them during the fighting in 2020, but  attempts to remove them by Azerbaijan’s national mine clearance agency have been stalled by Armenia’s refusal to hand over their ‘mine maps’, despite pressure from international mediators.

By September 2021 only two sets had been handed over, in exchange for 15 Armenian prisoners of war. The Azeris complained that the documents were only around 25 per cent accurate. In turn, the government in Yerevan, the Armenian capital, is thought to regard the torture and mistreatment of at least 200 Armenians in Azeri prisons as a reason to cling to their bargaining chips.

Overshadowing this is the spectre of the Armenian genocide, which touches all aspects of the conflict and has resonance at individual, national and international levels.

Azerbaijan played no role in the massacres over a century ago at the hands of Ottoman forces. Yet the cultural and linguistic similarities its population shares with the Turkish people, combined with Azerbaijan’s military backing from Turkey (a country with a track record of denying the genocide), have made the two into one and the same for many Armenians.

With regards to Nagorno-Karabakh, as Dr Tonoyan put it, “the phrase ‘never again’ has a question mark. People feel that the Turks might still come for them, and the war feeds that feeling.”

To add to this, many Armenian clerics were killed by the Turks, and after the genocide every victim was formally canonised by the Armenian Church. Figures such as Bishop Barkev Martirossian, a prominent cleric in Nagorno-Karabakh in the 1990s, spoke openly about the duty of soldiers to defend the region as a way to both protect their families and prevent the area  undergoing perceived moral decay at the hands of encroaching forces.

Furthermore Tchilingirian argues that ‘some Azeris and people in other parts of the Muslim world have seen the Karabakh conflict as a sign of the conspiracy against Islam’. Many of those in Nagorno-Karabakh are angry at the Armenian side constantly invoking the genocide as a justification for the killing of Azeri civilians and the destruction of mosques during the first outbreak of fighting.

For the individuals on the ground having to deal with the practical fallout of these political, ethnic and religious strifes, their world feels chaotic and uncertain. Despite the ceasefire, many either feel the war will start again, while others feel it has never truly stopped.

A ninth century monastery in Nagorno-Karabakh, Dadivank, is now being guarded by Russian troops. They  are unlikely to leave until 2025, sandbags and guns displayed prominently in the hope of preventing its desecration.

The building symbolises a belief system that for many is little more than a historic memory, but a crucial one nonetheless – a reminder of an ever-present past which is still dictating the future.

The most devout Armenians light candles and pray, and the abbot at the monastery offers solace to those present, but the second most prominent ‘higher power’ in the region seems to be Vladimir Putin. Everything seems to suggest he will be for a long time yet.

The cover picture of this article is ‘Nagorno Karabakh Defense Army’ by David Stanley on flickr. It can be found here: https://www.flickr.com/photos/davidstanleytravel/37563522512