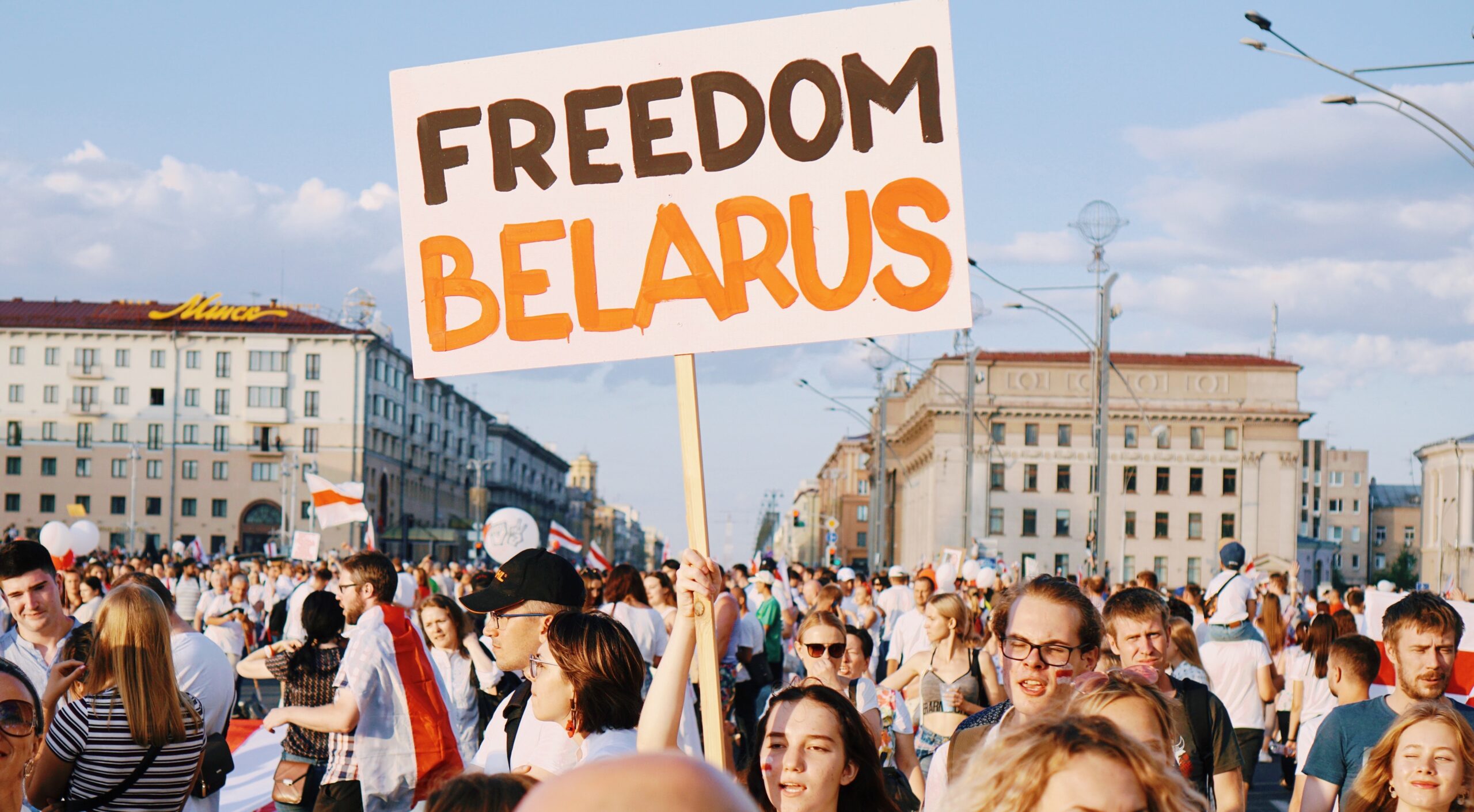 Maddy Fry shines a spotlight on the brutal reality of life inside Belarus.

The refrain ‘Europe’s last dictatorship’ has a particularly sinister echo at the best of times, given the continent’s long and fraught relationship with various despots.

Those who would like to hope that Europe, despite its various tensions and rivalries, might have shed violence as a means for dealing with its own citizens probably find it easier to ignore Belarus – a situation made easier by its geographical remoteness and its complicated relationship with Russia.

This might explain why Alexander Lukashenko, Belarus’ autocratic president since 1994, has managed to hang on in the face of widespread accusations of corruption and vote-rigging. Last year’s elections – for want of a better word – are widely regarded to have been fraudulent.

Lukashenko and his supporters claimed he was victorious, despite the opposition candidate, Sviatlana Tsikhanouskaya, maintaining she had won between 60 and 70 per cent of the vote. She was eventually forced to flee the country after she and her children received a plethora of death threats from the Belarusian security services.

The subsequent protests which erupted across the country were met with high levels of police brutality, with activists severely beaten, sometimes fatally, as in the case of Raman Bandarenka, who was killed while in custody – an incident the authorities tried to claim had been an accident due to him to being intoxicated when he was arrested, despite no trace of alcohol being found.

Protestors who have evaded capture still regularly face a hail of bullets from the police if they dare to congregate, and censorship is rife; fines are handed out for any kind of anti-government activity, along with asset freezes and legal challenges which ensure that independent publishers face ongoing threats of closure and constant intimidation.

Only state-run TV – known as BT – is allowed, with the country’s citizens bombarded by messages telling them that the protesters consist mostly of a diminutive group of trouble-makers spurred on by Polish and Lithuanian propaganda, the suppression of whom has now led to the restoration of a peaceful status quo.

Even beyond the confines of Belarus itself, anti-Lukashenko agitators enjoy few guarantees of safety.

In August the head of a group helping emigrés from Belarus in Ukraine, Vitaly Shishov, was found hanged in a park in Kiev, for reasons unknown. His death is still the subject of police investigations, but it is widely suspected of being a murder staged to look like a suicide. He had been warned by contacts inside Belarus that he might face attempts on his life by the state.

The protests have continued into 2021, though on a more subdued scale. Only the bravest, it seems, are willing to risk fines, imprisonment and torture in police custody.

They include Maria Koleisnikova, a pro-Sviatlana activist who ripped up her passport when the authorities tried to deport her from Belarus and continues to be a martyr figure to her supporters. She is currently languishing in the Valadarka prison, a deceptively picturesque 19th century castle in Minsk, the capital city, which currently houses over 100 dissidents. The country boasts at least 812 political prisoners.

The EU has imposed sanctions in the form of travel bans and asset freezes for the highest-ranking Belarusian officials (although Lukashenko was bizarrely only included last year). More stringent sanctions have failed to gain favour among a majority of EU member states.

In May of this year the journalist Roman Protasevich was seized by the authorities and, with his girlfriend, placed under house arrest after a Ryanair flight from Greece to Lithuania was suddenly diverted to Belarus. It was an incident that came across as a brazen signal that any finger-wagging from the rest of the continent could be shrugged off.

The countries bordering Belarus, such as Lithuania and Poland, have played host to those fleeing the regime, but this policy has led to rising tensions. High-profile residents in Poland now include the Olympic sprinter Krystsina Tsimanouskaya, who refused to return from Tokyo to Belarus after the summer Olympiad, announcing instead her plans to apply for asylum and eventually compete for Poland.

Lukashenko’s decision to allow Afghan, Iraqi and Syrian migrants coming into Belarus to risk the fraught journey into Poland has caused alarm among refugee rights’ groups about mistreatment at the border.

It has also ignited concerns that Lukashenko has been trying to bring about another migrant crisis in Europe by providing a back-door entry into the EU and thus provoking Belarus’ neighbours to reject their obligations to those seeking asylum.

Such a lack of accountability is rooted in a murky fusion of economics and realpolitik. EU member states and the companies that work within them are reliant on purchasing assets from Belarus which include oil and potash, a trade which  provides direct funding to Lukashenko’s regime. Stopping countries such as Germany from trading with Belarus is risky, given that it could mean German companies lose out financially to Russian and Turkish competitors  – a fact that is unlikely to be lost on the Belarusian president.

As Pavel Hanchuk, a freelance security and foreign policy analyst, puts it: “Restrictions alone have never been an ultimate magic wand. A combination of external pressure and internal national mobilisation is key …The future of Belarus can be determined only by its citizens.”

The shadow of Russian influence in Belarus is another factor in Lukashenko’s incorrigiblity. Vladimir Putin has been seen hosting the Belarusian leader on his private yacht, impervious to the latter’s decision to imprison Sofia Sapega, the girlfriend of Roman Protasevich, who happens to be a Russian citizen.

Prior to this, Putin gave Lukashenko’s government the first installment of a $1.5 billion loan designed to stabilise his hold over Belarus after the chaos of the 2020 elections. The second instalment came after the grounding of the Ryanair flight and the seizure of Protasevich and Sapega.

However, as Nigel Gould-Davies, a former UK ambassador to Belarus, points out, it isn’t an easy relationship: “Putin and Lukashenko are locked in a close but fundamentally dysfunctional embrace. From the Russian point of view, Lukashenko has provided valuable services that Russia should be very pleased about, including that it is emphatically undemocratic. If there is an ideal neighbour for Russia, it should be Belarus under Lukashenko. And yet Russia has managed to contrive a very difficult relationship. Russia always wants more control, and even compliance and a good relationship is not enough.”

This is complicated further by how Russia has managed to outstrip the EU as Belarus’s primary trading partner. Very few parts of the country’s economy, except for the IT sector, are free from Russian influence. This means the EU risks worsening an already tense relationship with Russia if it interferes further in Belarus.

Then there’s Lukashenko himself.

He seems an almost bleakly comic figure to many in Western Europe, with his hostility to any kind of criticism or dissent feeling like a throwback to the paranoia that defined life under Belarus’ former Soviet overlords.

Indeed, the video the authorities released of Roman Protasevich supposedly confessing to his crimes against the state, his wrists and arms showing marks of torture, felt reminiscent of the notorious show trials that took place under Stalin. One suspects that few bookshops in Minsk stock copies of Animal Farm.

Yet in a landscape which encompasses Turkey’s Erdogan and Russia’s Putin, Lukashenko is perhaps less unusual a figure than people might think. A recent opinion poll showed that less than 42 per cent of citizens in Belarus felt democracy to be a desirable way to run the country. Support for the introduction of free markets was lower still. The demonstrations therefore shouldn’t be conflated with the idea that Belarus wants to completely shake off its Soviet legacy and embrace the political economy of the European Union – a unit it is unlikely to join.

Gould-Davies highlights how ‘the Belarusian opposition have not actively sought a western orientation – that’s not been a part of their message’. Any post-Lukashenko future is likely to be a compromise between the pressures the country faces from both east and west.

What hope is there, then, for its beleaguered activists? There is no denying the strength of feeling against Lukashenko, even if his displacement won’t lead to the immediate reforms many hope for.

Sviatlana Tsikhanouskaya recently spoke on Twitter about how those who have been detained or lost their jobs for political reasons in Belarus include 250 doctors, nurses and medical students, 58 university lecturers and professors, and 35 athletes and sports coaches.

Hanna Liubikova, a journalist from Minsk, criticised on social media the hollowing-out of Belarusian artistic life, describing how ‘the regime is destroying every cultural centre, gallery and initiative in the country. Actors, artists, writers and creative workers are leaving’. She said: “We need the arts as a protective factor against dictatorship.”

The situation seems unrelenting, not least for Maria Koleisnikova, who continues to be held in a cell in Valadarka prison that is barely two and a half metres by three, and where the lights are kept dim, but never quite go out.

Yet her father Alexander keeps a steady vigil outside the prison, carrying a bag of her letters with him wherever he goes, having never been allowed to visit. His daughter writes every day. They somehow manage not to despair, despite her having been handed an 11-year prison sentence in September.

Her father’s pained, but stoic statement perhaps says it all: “She feels free inside.”

Many hope she might one day be free on the outside too – even if change from Belarus will almost certainly come from within.