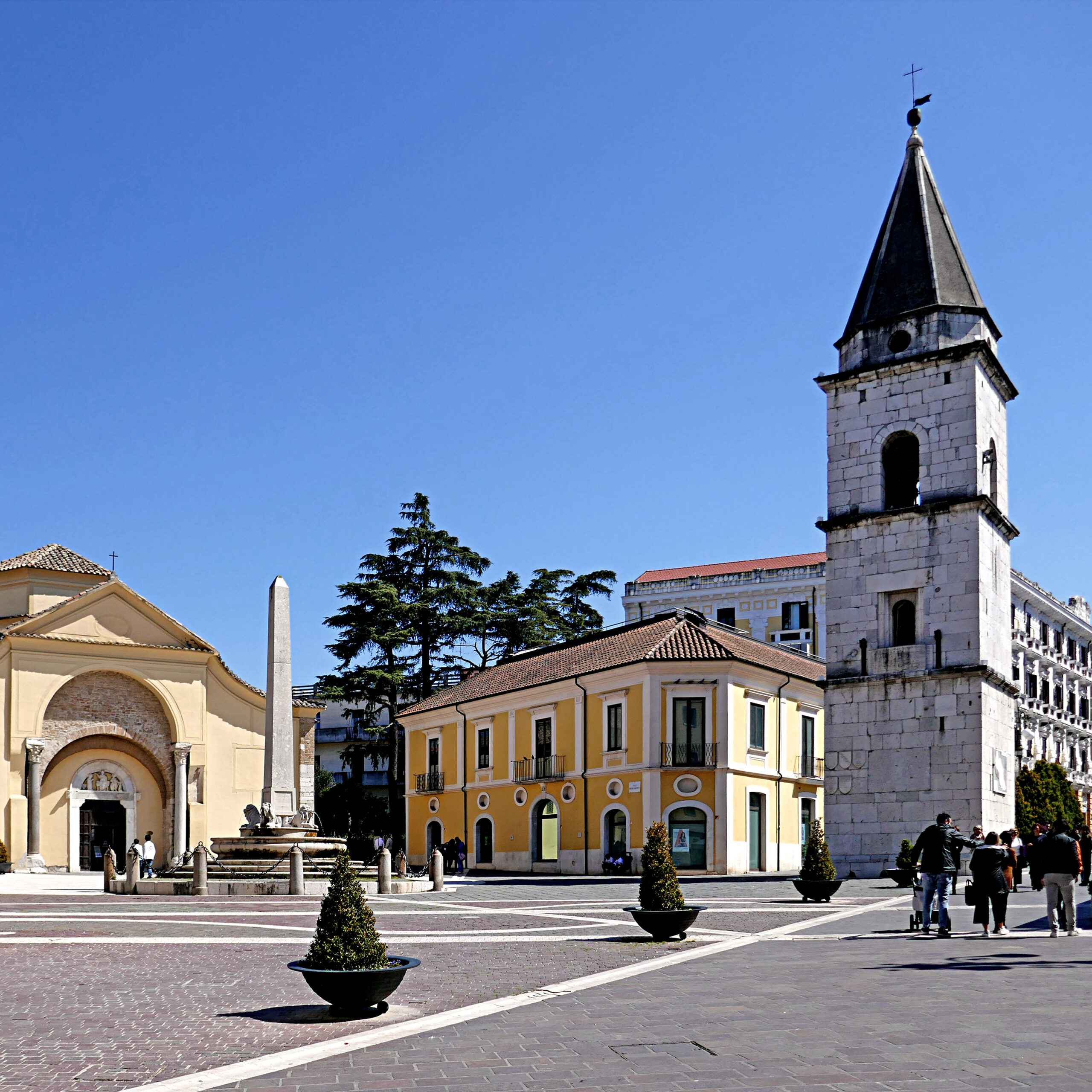 Luca La Monica takes the reader on a fascinating wander down the main street of his home town in Southern Italy.

Last month Italy finally reopened its borders to any tourist coming from other European countries. No more isolation, no more quarantine. This is an encouraging sign for the Bel Paese which symbolises how Italy is effectively recovering from the hardship of the recent pandemic.

It will give visitors the chance to return and enjoy the many wonders of the peninsula.

Italy is rich in cities filled with spectacular art treasures and cultural heritage sites. But it can be rewarding to wander off the well-trodden path and explore the lesser known places in which any art and history lover can, quite literally, walk through history within a very limited space: this is exactly the kind of journey I want to take you on, to discover the hidden gem that is Benevento.

Benevento is a small city located in the South of the peninsula in the Campania region, not far from Naples (a 90 minute drive). What makes Benevento special is the unique mixture of different forms of culture that a visitor will encounter simply by walking down the main street (Corso Garibaldi). These forms are full of contrasts but in a strange way history has made it possible for them to coexist in the same city, even better in the same street.

A walk down Corso Garibaldi …

The first stop has to be the Museo del Sannio.

The particular area in which Benevento is located is called Samnium and this museum houses artefacts belonging to the indigenous population of the territory – the Samnites (Sanniti). The Samnites were Italic people who occupied land between Central and Southern Italy, their language was the Oscan and one of their main cities was then called Maloenton (modern day Benevento).

Since the 4th century BC, the Samnites had been engaged in sporadic battles with neighbouring populations, especially the mighty Romans. During the Samnites Wars (343 BC – 290 BC) the Romans found in the Samnites’ fighting spirit a significant obstacle to their expansionist plans. More notably, the Samnites have gone down in history for being one of the very limited number of armies to force the Romans to surrender.

This event is known as the Caudine Forks (321 BC). The Samnites were able to cunningly push the Roman army into an enclosed valley in the area surrounding Benevento before imposing on them a humiliating retreat. Benevento was then known in the Latin world as Maleventum, which means ‘bad wind’ and is the Latin translation of the Oscan name, as well as a reference to the negative connotation which the city had for the Romans.

The Romans would eventually manage to conquer Benevento in the third and final Samnite War and established an important colony there.

In typically Roman fashion, they decided to rename the city from Maleventum (Bad wind) to Beneventum (Good wind) in order to show that the city, which was once a formidable enemy force, was now part of the Roman Empire.

The second stop on our stroll down Benevento’s main thoroughfare demonstrates the very close link that would subsequently be created between the town and Rome.

There are many relics of the Roman era in Benevento, most of them related to the emperor Trajan, who was the ruler who achieved the greatest military expansion in Roman history (98 AD – 117 AD). Trajan was a Spanish soldier who as emperor became very close to the Beneventani (the people of Benevento).

His affection was replicated and is reflected in the many works of art dedicated to the Optimus Princeps (best ruler) in the city. There are various statues and monuments of which the Arch of Trajan (114 AD – 117 AD) is surely the most astonishing and also best preserved example. This stunning marble arch became the main entry point to the city and has various inscriptions which tell the stories of Trajan’s triumphs and his special connection with Benevento.

Related to the same historical era is also the Roman Theatre (125 AD – 128 AD), a similarly well-preserved example of Roman architecture and one of the most important amphitheatres of the time.

How out of place is an Egyptian obelisk or a statue of the Egyptian god Apis in a Roman city? Turns out, it is not misplaced at all.

This peculiar phenomenon is related to the cult of the Egyptian goddess Isis, which was introduced into Italy as a result of the cultural influence of Cleopatra on the Roman ruler Mark Anthony and on the whole Roman world (32 BC – 30 BC). What is even more impressive is that these Egyptian remains were not imported from Egypt, but were made in Benevento itself as part of the developing cult of the goddess Isis.

As a result, we can find a fine example of an Egyptian obelisk (88 AD – 89 AD) and also a slightly less well preserved statue of the god Apis.

As the Roman Empire declined and eventually fell victim to the Barbarian Invasions (375 – 568 AD), a new people made Benevento its home, the Longobards (or Lombards). Their presence in Benevento (568 AD – 774 AD) is evident in many areas of the city, but it reached one of its highest expressions in Corso Garibaldi.

The Church of Santa Sofia (760 AD) is an achingly beautiful example of the blend between Christian and Longobard cultures which was declared a UNESCO World Heritage Site in 2011 for its historical and artistic value.

The church has unfortunately been seriously damaged on various occasions in its history, but has always been restored and presents a unique mixture of different artistic styles, which make it even more peculiar compared to similar churches.

Under Longobard rule Benevento became more and more of a political and cultural centre in relation to Central and Southern Italy (571 – 1077 AD). The Duchy of Benevento became a very respected and influential territory and reached its greatest military expansion under the duke Arechis II (758 – 787 AD). One of his main legacies, apart from the church of Santa Sofia, is the Longobard Wall (6th to 10th century) which protected the city from any approaching invader. Also worthy of mention is a specific type of script, the Beneventan script, which was created in Benevento and was used for many centuries (8th to 13th century AD). Examples of this script are housed in the aforementioned Museo del Sannio.

Continuing our walk down Corso Garibaldi, we eventually reach the Rione Ferrovia area – this part of the city has become famous for the ‘Witches of Benevento’.

From the 13th century onwards, there were many reports of witches performing various rites and practices around a walnut tree in the Rione Ferrovia area during the ‘Witches’ Sabbath’. It is interesting to note how the area of Benevento in which the witches used to gather was right next the Sabato river (Sabato means Saturday in Italian, but could be easily related to the word Sabbath).

The Christian community linked the works of these witches to the work of Satan, believing some of the rites would involve the use of children’s blood and a supernatural ability to fly riding on brooms.

There are at least two reminders of this period worth mentioning: the famous ‘Strega’ liqueur and the Benevento football team. The Alberti Company founded in 1860 AD is based in Rione Ferrovia and produces ‘Strega’ liqueur (Strega means witch in Italian). Legend has it that the main building of the company sits roughly in the same place in which the walnut tree was located and where the Witches of Benevento used to meet.

Another clear sign of the influence of this story on Benevento is its football team which has in its logo none other than a witch riding on a broomstick. The team is often referred to as ‘La Strega’ (The Witch) and the fans refer to themselves as the ‘Stregoni’ (The Sorcerers).

Despite the witchcraft parenthesis the name of Benevento would become increasingly linked to the Vatican and to the Catholic faith.

A little further on we find the ‘Duomo’ of Benevento, an absolutely gorgeous cathedral decorated in Romanesque style which dates back to the 8th century, the period of maximum cultural and political expansion of the Longobard rule in the city. The Duomo also represents the presence of the next ruler of the area – the Pope himself, as Benevento became part of the Papal States.

As far back as the 11th century Benevento became the seat of an archbishopric and, as a consequence of this, the Duomo has been modernised various times in its history, making the links between the Beneventani and Rome ever stronger.

Worthy of mention is the special relationship of Pope Benedict XIII with Benevento.

He was himself Archbishop of the city from 1686 to 1724 and served there for 38 years before being elected Pope – his bond with the people of Benevento was so strong that he retained the apostolic administration of the city even after his election to the Chair of St Peter until his death in 1730.

The Beneventani loved Benedict XIII and traces of his papacy are clearly present in various parts of the city – more particularly, right next to the Duomo is ‘Piazza Orsini’ (Orsini Square, Benedict XIII was a member of the Orsini family). In the middle of the square is located a beautifully decorated fountain and on top of the fountain is a statue of the Pope, a sign of gratitude for his work for the city and the Archdiocese of Benevento.

A more recent example of Christian devotion in Benevento is linked to its cathedral, where in 1910 AD a young man from Benevento’s countryside (Pietrelcina), Francesco Forgione, was ordained a priest. This simple and direct Franciscan would come to be known as ‘Padre Pio’ (Father Pio). Padre Pio was canonised in 2002 by Pope Saint John Paul II, has had a huge impact in shaping the spirituality of the area, and is greatly loved throughout the Catholic world.

And with that,  our amble down Corso Garibaldi and through the centuries is over.

We have quite literally walked through history: from Samnites to Romans, from Egyptians to Longobards, and from witches to saints.

The sheer volume of historical monuments, statues, buildings, churches and the tales that are linked to them seem too many to be contained in such a limited space, especially in a street of a lesser known city in Southern Italy.

But that is Italy: wherever you go you will find two old friends to accompany you – history and art. They are faithful and engaging companions whose presence is sometimes best appreciated in smaller, less visited places.