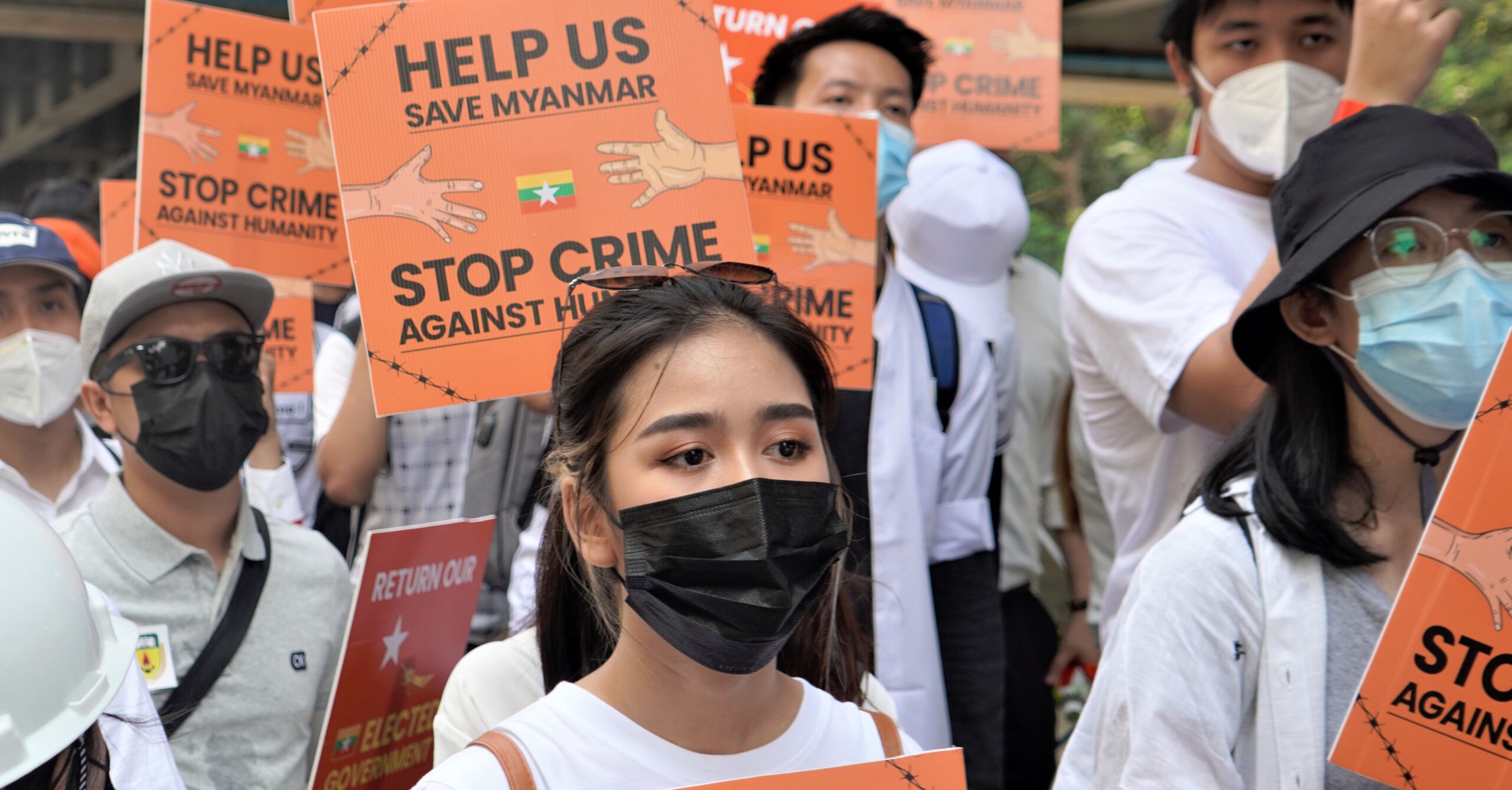 World leaders are silent or impotent as barbaric generals lead the country to a humanitarian catastrophe, says Benedict Rogers.

The killing of a Baptist pastor in Chin state, and cutting off his finger to steal his ring, as well as the indiscriminate and shocking burning of houses and aerial bombardment of villages, illustrate the utter barbarity, inhumanity and criminality of Myanmar’s military.

Pastor Cung Biak Hum, 31, was shot dead by soldiers as he tried to help extinguish a blaze caused by artillery fire, which destroyed 19 homes in Thantlang township.

The UN special rapporteur on human rights in Myanmar, Tom Andrews, described the pastor’s murder and the bombing of civilian homes as “the latest examples of the living hell being delivered daily by junta forces against the people of Myanmar. The world needs to pay closer attention. More importantly, the world needs to act.”

Every day since the coup on 1 February, my inbox and social media have filled with sickening images and reports of the depravity inflicted on the beautiful people of Myanmar. For over 20 years, I have worked alongside some of the most courageous, gentle, gracious, extraordinary people I have ever known — from all of Myanmar’s diverse ethnic groups and its majority Burman population — in their collective struggle for basic human rights and democracy.

Ten years ago, we all dared to believe that a new dawn was breaking in Myanmar, a door to democratization was opening, and — however fragile the path was — the possibility of some degree of freedom was beckoning.

I have traveled to Myanmar and its borders more than 50 times, including to Chin state, and eight years ago on Palm Sunday I was received into the Catholic Church in Yangon by Myanmar’s courageous Cardinal Charles Bo. So, of course, the country is part of the fabric of my heart, and what happens to its people tears at my heartstrings. The hopes raised over the past decade were my hopes too; the hopes so brutally and dramatically dashed in the past seven months are my hopes dashed too.

What I find most difficult to understand is the lack of international outrage, attention and action.

When Myanmar opened up a decade ago, world leaders flocked to Yangon to meet its reformist President Thein Sein and the infamous Aung San Suu Kyi, released from years of house arrest and ushered into national political leadership. But now, as she is back in jail and on trial, facing decades of imprisonment, and as the military regime unleashes a campaign of atrocities against the people of Myanmar, world leaders are silent or impotent.

The Assistance Association for Political Prisoners (AAPP), an internationally recognized human rights organization, reports that 1,114 civilians have been killed since the coup, 8,289 have been arrested, 6,637 are in jail and an appropriately Orwellian 1,984 face arrest warrants.

Britain’s new ambassador to Myanmar, Pete Vowles, has got off to a good start. In his tweets he was quick to condemn the atrocities in Chin state, he has retweeted credible human rights statements on Myanmar and — when I commented on his unfortunate tweet reflecting on his walks around Yangon — he was quick to issue a correction, which I applaud.

I retweeted his comment about the beauty of Yangon two days ago, saying that I too enjoyed such walks around the city until the military started shooting civilians, killing children, raping women, arresting and torturing people. He issued an apology: “I am sorry. I was trying to highlight the beauty of the city despite everything. I realized it was insensitive and deleted it. I hope all Myanmar people will soon be free to walk around this wonderful country without fear and in peace. Thank you for calling me out.”

That says a lot about ambassador Vowles’ character. It gives me confidence that he will be a defender of human rights in Myanmar. For a public official at such a senior level to acknowledge a mistake and express gratitude for a correction says a lot about his character and integrity. Insecure regimes and unconfident officials bristle at criticism and silence dissent. By his reaction to my tweet, Pete Vowles did the opposite — and in so doing embodies our values of democracy, accountability and basic freedoms.

That’s the difference between a free society and a repressive society. A Myanmar ambassador receiving the same reaction from a fellow citizen would have ordered that compatriot’s immediate arrest.

In contrast, China’s brutal regime in Beijing is facilitating the crackdown in Myanmar.

Even if it is playing games at the UN in New York and Geneva and perhaps giving a nod to the wider world that it’s not thrilled by the instability unleashed by Myanmar’s military dictator Min Aung Hlaing on its doorstep, it is not exactly being helpful either.

Beijing is playing a double game — giving the rest of us a wink that it’s not really with the generals while supporting them diplomatically, supplying them with arms and deporting Myanmar citizens across the border straight into an unfolding humanitarian disaster, according to CNN.

As the UN General Assembly closes, as the UN Human Rights Council gets underway, as the crisis in Myanmar deteriorates and as the UN secretary-general wakes up from his siesta, the international community must collectively regroup, smell — and then drink — the coffee and act. Myanmar is fast descending into a humanitarian disaster, with the combination of atrocities, Covid-19 and economic collapse.

The current attitude — by all powers, democratic and authoritarian — that this is a sideshow no longer cuts it. This sideshow threatens to enter the stage, bringing with it its flaming townships and refugees. It is in everyone’s interests to act now, to cut off the lifelines to this cruel illegal regime through targeted sanctions now, and provide a lifeline to the people of Myanmar through immediate and direct humanitarian aid.

Only if such action is taken can future ambassadors walk through the streets of Yangon enjoying the sunset, and pastors in Chin state fight fires without being shot at or having their ring fingers chopped off.

This article was originally published here on the Union of Catholic Asian News.

Benedict Rogers is a writer, human rights activist and senior analyst for East Asia at the international human rights organization CSW. He is the author of three books on Myanmar, including “Burma: A Nation at the Crossroads”. His story of becoming a Catholic in Myanmar is told in his book “From Burma to Rome: A Journey into the Catholic Church”.