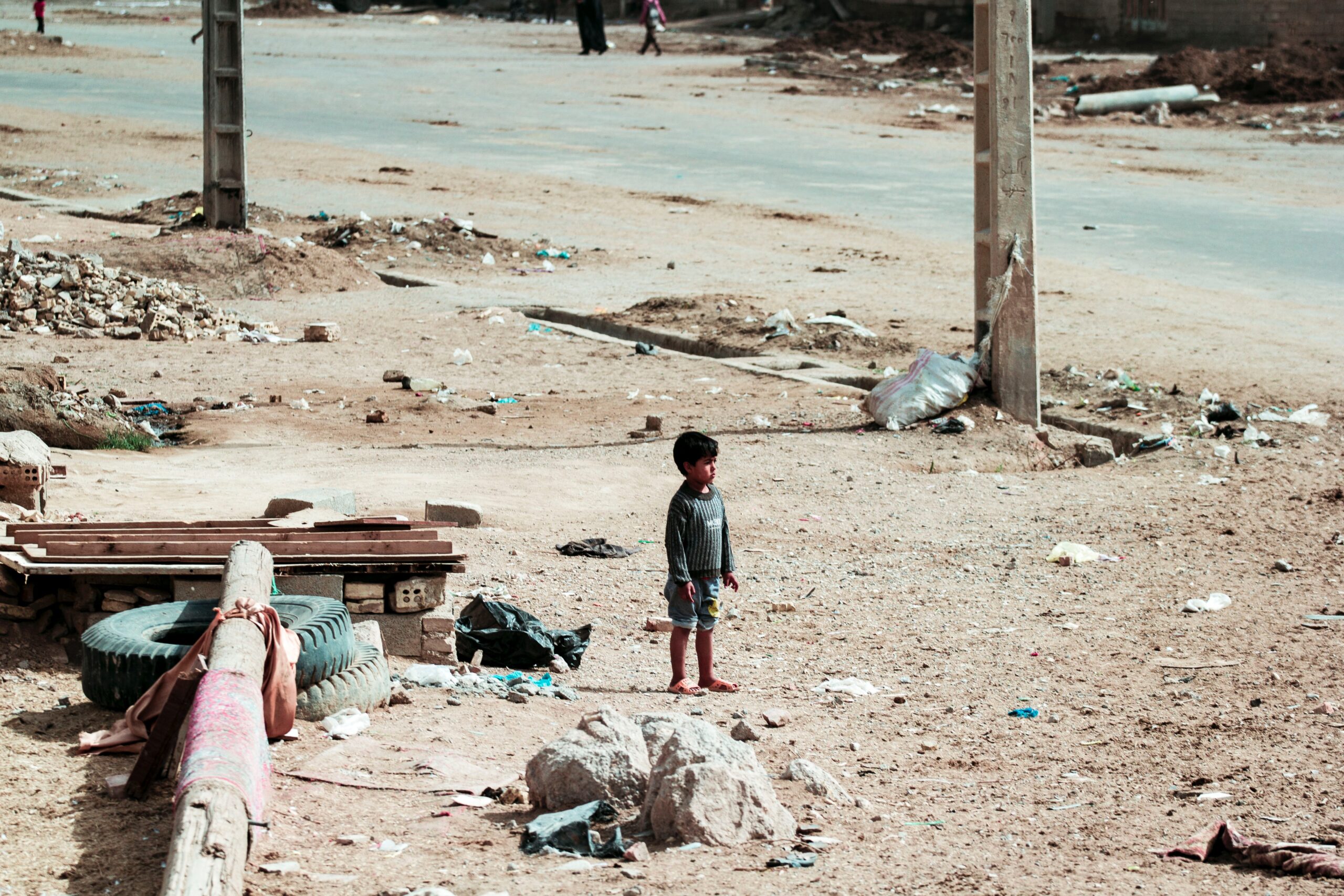 Prakarsh Singh describes his fieldwork in an urban slum for his research into malnutrition in his native India and reports an alarming lack of progress in the battle against hunger and disease.

I enter an urban slum in the city of Chandigarh. The paths are dusty and flies greet me in swarms. Children in ragged clothes are trying to fill up water in plastic containers from public taps. I pass a brightly coloured temple where beautifully adorned statues of gods look down on me. Nearby, a makeshift bell hangs from a tree to induce fortune.

A sweaty salesman beckons me to his cart of traditional ice cream, ‘Kulfi’.  Most houses are made out of unpainted bricks, have one room and a fan, no curtains or refrigerator. The roofs range from cloth to tin. A teenage girl is sweeping the floor of her house and the dust is falling in the passage. Dogs look for leftovers in the narrow corridor between the houses that I am following.

There is a crossroad and I see hundreds of such houses spread across the expanse where over 50,000 people live. I cross an open sewer that runs the length of the slum. A man tries to move his rusty bicycle through the garbage dumps and the chickens. They are looking for their grain of life. Buffaloes take a dip in a pool of stagnant water.

Mosquitoes buzz around me as I enter an ‘Anganwadi’ in the residential area of the slum. The government day-care centre houses 40 children between the ages of three and six in a two-metre by three-metre room with alphabet charts on pink walls but no lighting. This is one of 1.3 million Anganwadis across India located in a city with the highest per capita income in the country.

A child is crying and some are simply sitting.

There is no fan. The clothes of the children are dirt-stained. The helper asks them to greet me. They chant out “Good morning, Sir!” I wave back. Some children gather around in groups to get photographed. I click their picture and show it to them. For many, this is the first time they have seen themselves on a digital camera.

An Anganwadi is a child day care centre set up by the Indian Government to improve child nutrition, socio-emotional skills and cognition. These centres cater for more than 30 million children between three and six years old as well as serving as a food distribution centre for children under three, and pregnant and breastfeeding mothers.

However, there is no official syllabus and standardized tests for assessing cognitive or socio-emotional skills do not take place. A recent survey of Anganwadis in Chandigarh showed that an Anganwadi worker spent about a quarter of the time talking to other adults, a quarter compiling her 11 registers, a quarter serving the mid-day meal and a quarter absent. The children are eagerly waiting for their midday meal that is carefully stored in a steel container. Today, it’s porridge.

I meet a monkey painted on the walls who looks like he is talking to me.

I am a monkey with a squint painted on the walls of an Anganwadi center in Ram Darbar Colony, Chandigarh.
I have been here for several years watching children eat, play and grow.

I sometimes wonder, however, if they are eating, playing and growing enough.
The worker teaches the kids about numbers by asking them to clap.

Sometimes, they learn names of animals (including me and a lion painted near me). Fortunately, there is a zebra between us.

I was made to make them laugh, I think, but these days they are busy with building blocks and ball games.

The children are often very noisy and the worker has to tell them to sit quietly.

I prefer that there is some noise during the day as I lie in the dark after the children leave for their homes in the afternoon.

I overhear their conversations and they appear to tell each other about the tough lives their parents have, the depth of their poverty (which they have become accustomed to) and how much they like this temporary escape.
They learn about modes of transport and I wonder if they wonder if they will ever be able to travel in a car or in an aeroplane.

They have a main course (like dal-rice or porridge) and dessert (like panjiri or halwa) that makes me hungry, yet I stare blankly and try to pay no attention.

The children grow and leave me behind.

I stay here, a silent witness to how lives were shaped.

The severely undernourished children are supposed to get two helpings in their bowls. In practice, this is not monitored.

Severely malnourished children are five times as likely to suffer from child mortality compared to normal weight children. This is primarily because of lowered immunity to diarrhea, pneumonia and malaria.

Despite the Integrated Child Development Services (ICDS) program that was set up in 1975 to run the Anganwadis, progress has been hard. India’s child malnutrition rate is among the worst in the world as 43 percent of children under 5 years have some form of stunted development.

War-torn (and much poorer) Ethiopia, the Democratic Republic of Congo and Liberia all have a lower proportion of children malnourished compared to India.

Even though India has the same per capita income as Ghana, the proportion of malnourished children is shockingly three times higher.

Despite the global child malnutrition rate declining from 40% to 23% between 1990 and 2015, progress in India has been much slower despite relatively rapid economic growth. The country is home to over a third of the world’s underdeveloped children and an estimated 1.27 million children die in India every year due to malnutrition. A puzzle is why parents do not increase calories, fat and protein intake among their children despite increasing incomes.

Slum dwellers here are usually vegetarians who survive on milk and pulses but rarely eat fruit, salad or ‘Mithai’ (traditional Indian sweets that are rich in calories). The average household salary is Rs. 3500 (about £37 pounds sterling) per month for families of children in these centres. Close to 80 percent of dwellers own mobile phones but few have flush toilets or water filters. Another puzzle is why parents do not invest in hygiene and sanitation despite there being such enormous returns in terms of health. Perhaps their poverty might also be poverty of information and understanding of these matters.

The Anganwadi worker asks a boy to recite a poem. The poem is about round objects around us – from the celestial to the humble egg. The others applaud. I ask permission to weigh a few children on a digital weighing scale. A little more than half are malnourished (low weight-for-age based on WHO recommended mean for their age and sex). Most are unable to read their own weight.

A mother I interview does not know what is good for her girl if she gets diarrhoea or loses muscle mass. Indeed, according to the Demographic Health Survey (2005), nine out of 10 Indian mothers do not follow the recommended increase in fluid intake in response to their child suffering from diarrhoea. She also does not ask me after the interview. Almost half the mothers cannot read and write.

Uneducated mothers carry an additional burden with them – that of lack of curiosity and confidence.

They are forced to trust and not question. Reason, logic and curiosity which may help households escape the malnutrition trap are tragically absent in many cases. Meanwhile, the olfactory nerve has become used to the pervading stench from the sewer.

Malnutrition is an all-pervasive and complex issue facing India that has implications for the future of the country’s human capital and growth. Existing evidence points towards the following reasons for high malnutrition in India – apart from low incomes. On the supply side, deficiency in the supply of mid-day meals, low motivation among Anganwadi workers, and no powerful monitoring mechanisms are key components of the ineffective child development programmes. On the demand side, poor nutritional knowledge and education among mothers and a lack of sanitation and access to clean drinking water may be responsible.

The persistent levels of high malnutrition in India needs action on both fronts simultaneously and urgently – just working on one of these will not be enough.