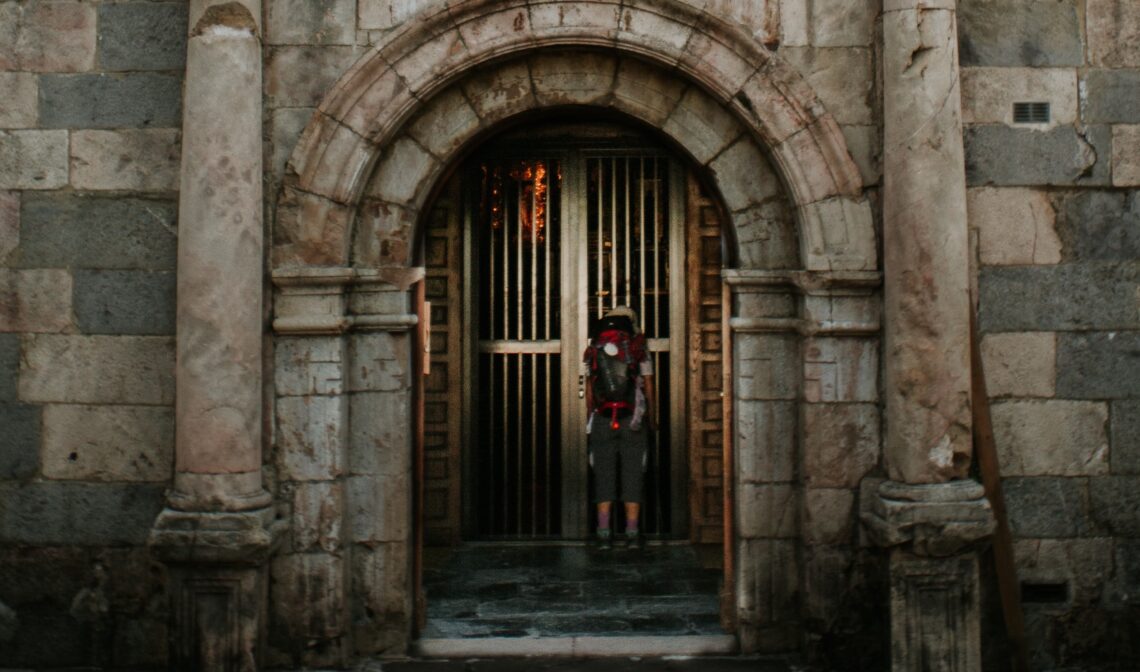 Adam Brocklehurst goes kicking and screaming to the shrine of a saint who dared to challenge the political establishment of his time.

During the enforced monasticism of the COVID lockdown, I began to get irritated by something I hadn’t asked for, something I didn’t really want. It crept into my mind, again and again. Every article I read or picture I admired seemed to point me endlessly in the same direction.

It took me a while to realise I was being ‘called’, and when I realised, without doubt, what this calling was, I felt even more miserable. I prayed about it, battled with it in the hours before sleep came, then, finally beaten, submitted myself to the will of my Higher Power.

You see, I don’t want to be a pilgrim, seriously I don’t. I’m constitutionally disinclined to the idea. I have no sense of direction. I have bad knees and a terrible back.

I have travelled enough to have satisfied any wanderlust I might once have possessed, and I’m under no illusions regarding the joys of dormitory sleeping and rudimentary services. There’s also the simple fact that I can’t afford it. ‘God will provide’ doesn’t quite cut it when the woes of financial security weigh heavily on you (though of course he did in a roundabout way).

So, in a world richly endowed with places of pilgrimage, where to start? There at least I had something to go on. During some genealogical research I had been doing, I followed a line of enquiry that had led from Southwark Cathedral on the banks of the Thames in South London, through the villages of Kent to the Cathedral city of Canterbury. While the research proved a wrong turn, not unusual in either pilgrimage or family investigation, it clearly indicated in which direction I was meant to go.

Saint Thomas Becket, once considered one of Europe’s greatest saints, had been much in the news, and there were various events being held to mark the 850 years since his assassination.

The holy bishop, born in Cheapside, London, famously argued with King Henry II over the power of the State to impose its sovereignty on the Church, fatefully leading the king to ask, “Who will rid me of this turbulent priest?” It seems that some of his nobles quickly obliged, and in a most bloody manner, striking Thomas down in his own cathedral.

As someone who has had his own gripes with the State, I felt more than inclined to follow in his footsteps.

Coincidence is often the close companion of the pilgrim.

After the short journey from Victoria Station in London to Canterbury, I found myself sitting in an old fashioned greasy spoon café, eating fish and chips and feeling sorry for myself as the gloomy afternoon half winter light tried its best to break through the clouds.

The elderly lady on the next table next to me was having a loud, one-sided conversation with an embarrassed looking young man. “Bleeding bats! My church is full of ‘em, I can’t look out me bleeding window without one looking back.” It was only when she had finished eating that I realised she didn’t really mean bats at all. Pushing the casual racism out of my mind, I left the steamy café for the Cathedral.

Canterbury Cathedral has stood on this site since late Roman times; it is the place the mycelium of Christianity spread outwards across the British Isles. It’s a beautiful building full of lovely medieval stained glass and really wonderful gothic architecture, impeccably maintained no doubt by the extortionate entrance fee which I had rather  begrudgingly paid. The place was thronged, not with pilgrims as might once have been the case in times past, but with tourists.

In this it is not unique. I had visited a few of the once great medieval shrines which survive in London, prior to my visit to Canterbury. Attending a service is the only way you can enter these ancient cathedrals and abbeys free of charge, and the entrance fees are often fantastically expensive in these financially constrained times.

I had for instance, on the advice of a friend, contacted a famous London abbey, the burial place of another great saint, to ask if I might visit his shrine – I received no response. Little surprise then, that pilgrims are often thin on the ground.

Thomas Becket isn’t materially present in Canterbury Cathedral anymore (though there is a small modern shrine on the site of his execution). Henry VIII, who made himself head of the English church in the 16th century, had a special aversion towards the cult of Becket. A man who stood up to a king, and in death forced the same king into lengthy and embarrassing atonement … one can see the issue!

Early in the English Reformation, and on the king’s direct orders, his shrine was quickly dismantled, its treasures loaded onto carts and taken away to enrich Henry’s treasury. John Butler’s excellent The Quest for Becket’s Bones: Mystery of the relics of St Thomas of Canterbury debates the probable outcome of his earthly remains.

I had to travel the short distance (just opposite the cathedral, to be precise), to the modest Victorian Catholic church of St Thomas of Canterbury to be in the actual presence of a relic of his.

Becket isn’t alone here; appropriately he shares the space with a relic of St Oscar Romero, a Salvadoran Bishop martyred for speaking out against his country’s ruling elite in 1980 and attempting to prevent the persecution of his fellow Catholics and other abuses of human rights.

Like Becket his outspokenness threatened the status quo and he too was silenced. I sat alone in the quiet church and prayed, meditating on the lives of both these men of conscience, whose murders nearly 800 years apart still resonate so strongly today.

As I left Canterbury to return to London, the night was drawing in quickly and the wind and rain had started to get into their stride. I climbed an ancient Roman burial mound to take a final look over the twilight city towards the floodlit Cathedral.

As I clung to the railings, I thought about the battles which still need fighting: our world is still an unequal one and the State seems to be increasingly at odds with the wishes of the people, if not in policy then in personal morality.

I wonder if the days of people standing up to be counted are over or if someone waits patiently in the wings to rise up and challenge the absurdities of our current political situation. Only time will tell.