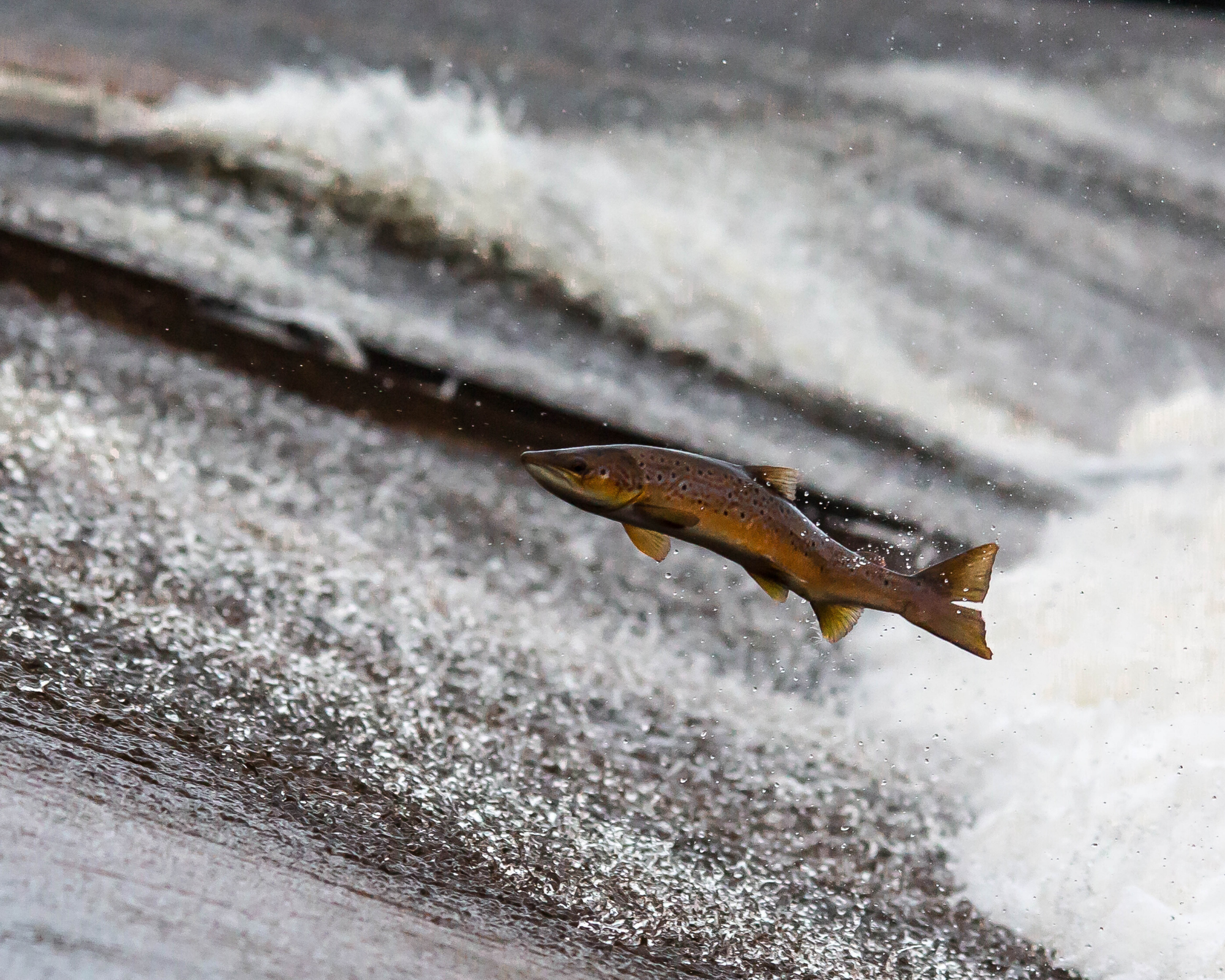 Jonny Parreno journeys from the supermarket counter to the moon in the company of the simple salmon, and uncovers great pearls of wisdom along the way

When winter comes and the price of salmon drops, my dad leaps into action, pushing through the crowd at the counter at Morrison’s to grab a few whole fish. We scale, clean, fillet, cure and smoke over the next few days. It’s often surprising to me to see the real thing at home, so used am I to supermarket fillets neatly wrapped in plastic devoid of any obviously discernible animal form.

Wild salmon spawn in freezing cold rivers. They hatch and begin the game of survival, first eating microscopic organisms, then insects, while avoiding eel, trout and birds. Over the next few years they grow to a size of about five inches and this is also the period where the ‘smell’ of the river is imprinted, so that they know how to navigate back as adults. Their bodies will not only change in size but in purpose as they move into the liminal zone between river and sea – later they will need to move from freshwater to saltwater. Once in the sea, they will hunt other fish and continue to grow up to half a metre long and can weigh four kilos or more.

It might not sound terribly impressive, but really that’s just the mass of the body. Its real weight feels much heavier to me as I marvel at its sleek, torpedo shape and the dense yet supple musculature. There are large fat deposits in the belly that keep the fish alive on its journey home. When the salmon return to the rivers during the spawning season, travelling around 3000 miles in the process, they no longer eat.

This journey is the most impressive part. They face storms, seals, dolphins, killer whales, bears, humans and waterfalls, leaping up to three metres against the flow, against the tide, using that homing beacon imprinted on them in the juvenile stage – just to be able to lay and fertilize their eggs. Those gravity-defying jumps are perhaps what gives the salmon its name, which comes from the Latin salmo, believed by some to derive from salio – I leap.

Most males die after the perilous return but females can often return several times more to spawn. After three spawnings, a female may have travelled over 18,000 miles. What an incredible distance that is to travel without machines. They jump again and again, launching themselves in a flash of scale, rigid and taut. Sometimes their aim is awry and they hit nearby rocks. I find myself unconsciously cringing in sympathetic pain at the sight, yet the salmon does not stop trying and I watch silently waiting, willing its overdue triumph. It is this unwavering perseverance together with an unerring sense of direction that allow the fish to begin the cycle anew.

That is the basic life story of the salmon and it’s one that is easily found in nature documentaries. But there are other stories I prefer to hear when it comes to food. I like to listen to the voices of ancient cultures and societies that depended upon and benefited so much from natural resources because I find it helps me situate myself momentarily outside of the prevailing 21st-century narratives of sustainability and health.

The Celts often associated salmon with wisdom and age. The most famous of their stories involves Fionn mac Cumhaill (of the Fenian Cycle). As a youth he is apprenticed to a great sage. One day he is instructed by Fennegan the sage to catch and prepare the Salmon of Knowledge, a venerable inhabitant of the Well of Wisdom. Sometimes the Well of Wisdom is described as the source of the River Shannon, sometimes the River Boyne – sometimes both. The well was surrounded by nine hazel trees. The salmon had eaten nine hazelnuts and thereby gained the knowledge of the world. The young Finn catches and cooks the fish, but in the process he burns his thumb. Naturally, he sucks it, and is suddenly granted all the knowledge of the world. There is a very similar story about the semi-mythical Welsh bard Taliesin.

In Norse mythology, where the salmon is associated with Loki, god of cunning, trickery and invention, Baldur the beautiful, son of Odin and Freya, is the most beloved being in existence. After manipulating Baldur’s blind brother Hodur into killing him accidentally with a dart made of mistletoe, Loki becomes hated. When autumn arrives, Loki joins the Aesir – the principal group of Norse gods – and invokes his right to join them at a banquet. There he goads and insults them all, but due to the laws of hospitality they are honour-bound not to harm him.

Thor, however, loses his temper and threatens him so Loki flees to the mountains where he hides by transforming himself into a salmon by day, returning to eat and drink at his hut by night. He chooses the form of salmon because, as Neil Gaiman’s Norse Mythology tells it, “The gods themselves could not catch a salmon as it swam”. Of course, they do catch him but it requires the invention of the fishing net, rudimentary dragnet fishing, and Thor’s physical prowess. As Loki attempts to leap over the net, Thor catches him by the tail, squeezing so hard that every salmon since then has had a thin tail.

Across the ocean, the Pacific salmon has various legends, stories and rituals surrounding it.

The Ainu are the indigenous peoples of Japan. They traditionally depended on salmon for food during the cold months, and they would tan the skins to use for boots. They considered it to be a ‘divine being’ that had to be treated respectfully otherwise it would not return the following year.

This concept is explored in a legend about a young Ainu fisherman whose boat is blown far off course. Arriving at a quiet island, he finds it inhabited with generous and gentle people. The chief elder offers him hospitality for the night, and he will send the young man home in the morning. He accepts respectfully and is treated to water from the merry little brooks that run through the island. This sweet water makes him feel rather jolly and sleepy, for it is actually sake.

While the Ainu dreams, the chief elder appears and reveals that he is the spirit of the ‘divine fish’, and that he expects his generosity to be matched by a yearly offering of sake. The young man agrees, and wakes to find himself on the shore near his village, and yet an entire year has passed even though he spent only a night. There is a very similar story told by the Haida people, a native group who live in British Columbia, near the Alaskan Panhandle. In this story, however, the requirement is not to offer libation but to remember to return the salmon bones to the river.

The holistic wisdom of our predecessors produced narratives that wove together an understanding of humanity’s animal condition together with the yearning to articulate what Heidegger called dasein – an awareness of existing as a conscious person, living alongside other persons in the stream of time.

To think of salmon as just a renewable, nutritious source of food high in omega 3 does not inspire any sense of respect for the fish, for it does not touch upon any real sense of its relationship to us. Insofar as it is a ‘progressive’ mindset that ostensibly looks forward into the future, it denies the past body of accumulated experiences which speak to us in less reductionist language.

Just as salmon swim upstream, their odyssey from riverbed to ocean and the return journey should remind us that humans would do well to regularly return to the past, battling against the flow of time to remember where we came from and what truly matters in life.

Death, winter, rebirth, spring. Cycles in nature are so often tied to the seasons, and they of course are tied to the moon, whose weight pushes and pulls at the great bodies of water to give us tides. Without the tides the salmon could not hope to complete their journey home. Nature’s bounty and the way human culture responds to it are shown in the stories and rituals surrounding our culinary habits.

All the major religions have prayers to bless food, reminding the faithful that humans are not unlimited masters of the earth and must express gratitude for the provenance of food beyond their power and control.

Just before Neil Armstrong went into space, he was asked what the point was. He said: “I think we’re going to the moon because it’s in the nature of the human being to face challenges . . . It’s in the nature of his deep inner soul. We’re required to do these things just as salmon swim upstream.” As I chomped merrily this winter on home-smoked salmon, I sensed the slow dawning of this article. Each bite of salmon blinis couldn’t have been more than a few grams. And yet after 10 or so of these delicious morsels I felt as light and simultaneously ponderous as that famous giant leap for mankind. As we move into the third decade of the 21st century we would do well to remember that looking forward works best when we can relate to what came before.

Jonathan Parreño holds a BA in English from King's College London and since graduating has worked in publishing as a freelance proofreader and desk editor. He loves anything with the themes of true crime, gangsters, noir and cyberpunk, is convinced that video games can be appreciated as highly as any other visual art, and believes that TV peaked with The Wire. Jonny is a Staff Writer for Adamah.