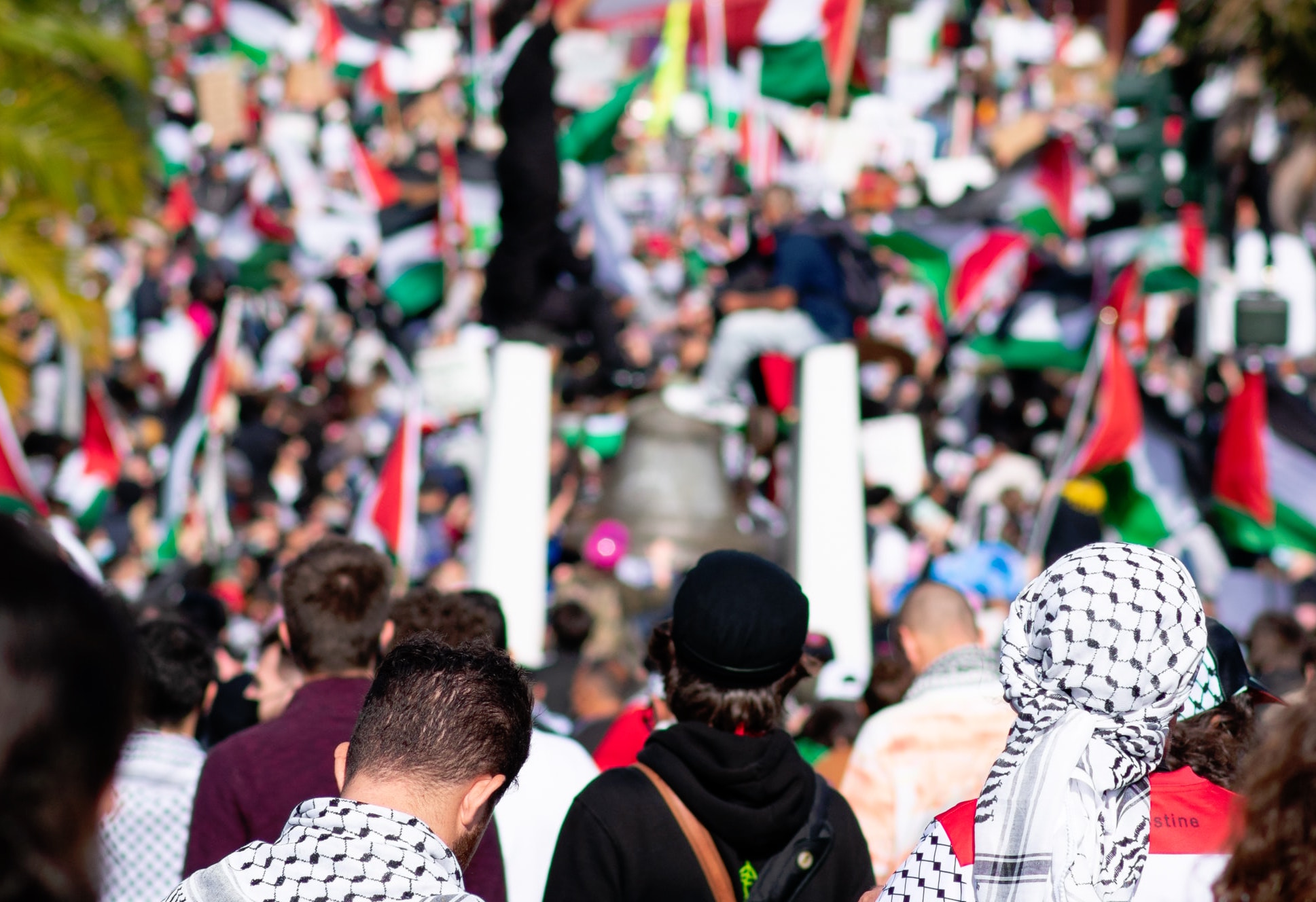 Maddy Fry reports on changing perspectives for the future of Israeli-Palestinian cohabitation.

In the league table of topics guaranteed to spark controversy in any setting, one issue has held top spot for half a century. The former UN Secretary-General Kofi Annan perhaps described it best in a speech to the Security Council in 2006: “No other conflict carries such a powerful symbolic and emotional charge, even for people far away” than that between Israel and Palestine.

It’s a conflict with no end in sight. Despite a ceasefire being declared in May, the recent bout of bombing by Israel in the Palestinian territories has left at least 212 Palestinians dead, including more than 61 children, and at least 1500 wounded.

In the words of the director of the Al-Mezan Centre for Human Rights in Gaza, Issam Younis, “entire families are forced to sleep on kitchen floors because it seems safe, even though nowhere in Gaza is safe.” He further reports that “23 hospitals and medical centres have been damaged or destroyed. To leave, people need to obtain delayed Israeli exit permits. Only 21 per cent of these are granted even if they need to go for medical reasons. People then die as a result.”

In terms of the wider implications, few other wars have managed to become the Achilles Heel of both those on the left and the right of politics. And likewise, in many ways, the existence of the state of Israel is both a reminder of humanity’s failure to stamp out the cancer of anti-semitism and of its guilt for having allowed the shame of the Holocaust. Perhaps that is why so many people have an opinion on what happens on that crowded strip of land;

Israel forces us to ask ourselves what kind of human family we wish to be.

In Britain, anti-semitic tropes have become a hotly contested aspect of the Labour Party’s internal soul-searching in recent years. It’s also undoubtedly true that many of those who hold hardcore anti-semitic views are hostile to Israel on principle, given its self-declared identity as a ‘Jewish state’.

Yet this is complicated by how the term ‘anti-semitism’ has frequently been used as a political football, to be thrown by defenders of Israel at anyone who disagrees with the country’s policies towards those in the occupied Palestinian territories.

This is a deeply problematic trend for a number of reasons. The cavalier use of the word ‘anti-semitic’ threatens to dilute the importance of a term that describes the shameful impact of centuries of violence and discrimination against Jewish people; yet it also ignores the diversity of opinion within Jewish communities.

The reality is that most devout and observant Jews are not unthinking Zionists. Prominent American scholar Corey Robin, for example, has railed against how in many American synagogues, ‘occupation becomes an abstraction, Palestinians an absence, oppression a metaphor…’

In other words, not everyone who objects to Israel’s policies towards Palestinians on social justice grounds, including the restriction of movement, arbitrary detention, the destruction of people’s homes and the bombing of civilians, deserves to have the term ‘anti-semite’ thrown at them.

The debate is muddled even more by the fact that many of those who support Israel – the state and its policies – are on the right of the political spectrum, a situation that presents a conundrum for many on the left, given that the most destructive forms of anti-semitism in the last 100 years had their origins in right-wing fascist movements.

In an ideal world, for those who call themselves progressives, supporting a homeland for anyone who survived the Holocaust and the horrors of the centuries before, as well as their descendants, would be the right thing to do. Some would argue too that the disproportionate response of certain Jewish Israelis towards the non-Jews they share a homeland with is perhaps unsurprising given the unspeakable abuses their ancestors had to endure.

And yet, in a world where many Muslims are also facing stigma, persecution and ethnic cleansing (in such disparate lands as India, China and Myanmar), the Israeli Government’s treatment of the Palestinians is rightly considered abhorrent by many.

More often than not, realpolitik rather than principle seems to win out. Thus defenders of the status quo across the political spectrum argue that the rockets fired by Palestinian fighters into Israel have resulted in the deaths of civilians and serve as evidence of the need for firm measures.

There are also those who argue that Israel’s support for Western interests is needed, given how hostile many of the Muslim countries which surround it are towards America and European democracies. The USA’s mercurial and self-interested attitude to politics in the Middle East notwithstanding, many argue that Israel is a bulwark between western democracies and countries such as Iran, which has a political system in thrall to religious zealotry and nuclear ambitions.

However, the realpolitik option is not sustainable going forward, and the violence of the last few weeks has made it easier to argue that the world no longer owes the Israeli Government the turning of a blind eye.

This is perhaps because whichever way one might lean in the debate, the facts on the ground regarding the ongoing carnage are hard to refute. At a recent online conference held by the Balfour Project, an organisation calling for the British government to recognise both Palestine and Israel as nation-states, Sahar Francis, the director of the Addameer Prisoner Support and Human Rights Association, highlighted the stark differences between the laws under which Israelis and Palestinians live.

“There are violent mass arrests by the Israeli police of Palestinian children. 160 minors are in Israeli detention centres and four children are currently held in administrative detention. Offences can be as small as throwing stones at the police, and with Palestinian juveniles cases have rarely been thrown out when torture has been used,” she said, adding that “conviction rates in Israeli courts are well over 90 per cent.”

The Jewish Israeli activist and lawyer Michael Sfard said: “Palestinians are subject to military law whereas Israelis are governed according to penal law.

Identical crimes might be committed in the same territory but the only difference between those convicted would be the nationality. The Palestinians live in a closed military zone and this creates a reality where there are two sets of laws facilitating the rapid growth of a Jewish community that curbs any development of Palestinian community life.”

A further example of this has been the differing property rights accorded to Palestinians and Jews who were displaced when the state of Israel was created in 1948: “The Israeli parliament enacted a law that nationalised the property of all Palestinian refugees. A Palestinian person’s house in West Jerusalem from before 1948 is no longer his or hers, whereas Jewish refugees can claim theirs back.”

His view on the situation was uncompromising: “Apartheid is being committed in the West Bank. Israel is waging a war on its own soul,” but also the dual legal system has demonstrated that “its proponents are weak and afraid”.

The celebrated human rights lawyer Philippe Sands said that Palestine’s decision to join the International Criminal Court (ICC) in 2015 and to refer Israel’s attacks and land-grabs to the court’s jurisdiction has been a positive step – yet it has drawn attention to the problems arising from Palestine’s ambiguous status as a nation.

“The Israeli settlements have breached international law, and the construction of the wall between Israel and the occupied territories has violated the Geneva Convention and the obligations Israel has towards Palestinian self-determination. But the prosecutor at the ICC has said that there are jurisdictional issues. There are questions about whether Palestine is a state, and if it is, where the borders are delineated, and what the legal implications are,” he explained.

The likelihood of other countries intervening to improve the situation is low. Claims by countries such as Britain that it supports international law have rung hollow given how often the UK has been a de facto apologist for Israel’s actions.

The barrister and former Conservative Party politician Dominic Grieve thought that other European countries take a similar line: “Like Britain, they don’t feel they can exert public pressure in case of a rupture in relations with Israel, even though they can maybe apply private pressure. The USA is the only country that could bring about change, but it won’t.”

However, there are signs of changing attitudes within America’s Jewish population.

At the Balfour Project’s conference, human rights lawyer Zaha Hassan said that social media visuals had made the violence meted out by the Israeli authorities harder to ignore.

“The Jewish-American community’s support for Israel is changing. Images of buildings in Gaza being pancaked, the bombardment of the Palestinian enclave, the mob violence and the hatred, can’t easily be dismissed anymore,” she said.

Michael Sfard echoed this when he said that “things can now be said in American synagogues that used to be unspeakable. In future we might see this change into political capital.”

His words gave the conference a much-needed note of hope. Until then, peace will continue to feel like a distant dream to so many, both within and outside of Palestine and Israel. And the open wound of conflict will continue to bleed puss and blood.