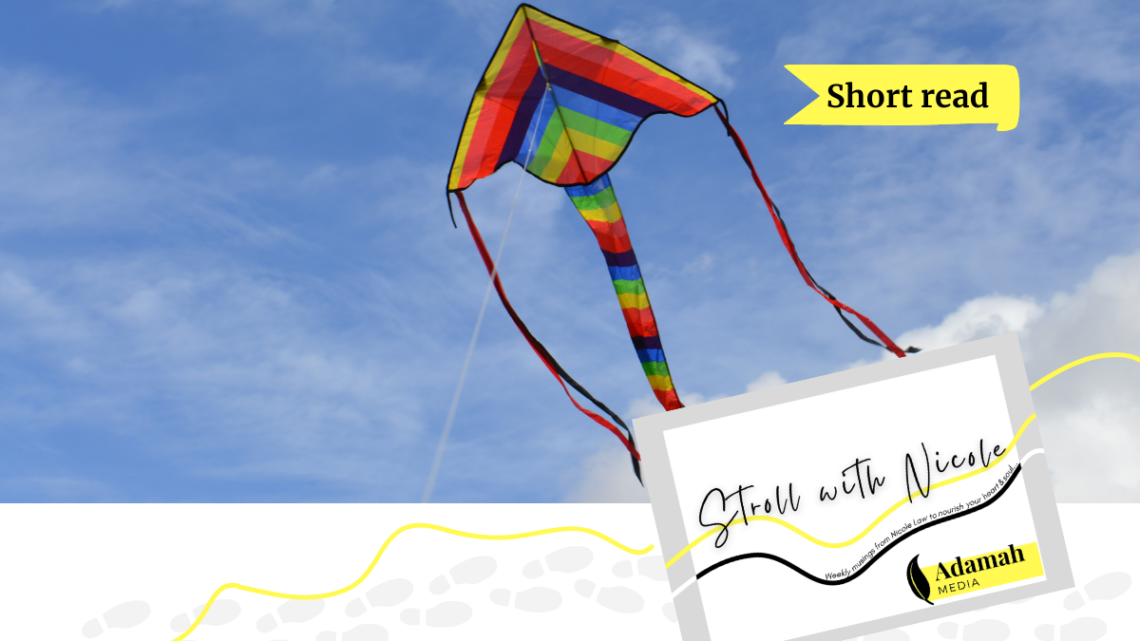 Nicole Law ponders on how to learn the virtue of detachment.

On a walk recently in a downtown park, I caught sight of a few children flying kites. One of the kites was jerking up and down and failed to ascend smoothly into the sky. I wondered why. Upon closer inspection, I glimpsed the tightened knuckles of the child around the string. A woman who was seated nearby remarked, “Let go, my dear, let the string go!” The boy released the string and let out a hoot of joy as the kite soared higher in a fluid motion. My heart soared a little too.

It made me think about the things I hold onto tightly, for fear they will slip from my grasp. Why was I afraid? Like the little boy, perhaps the fear arose from the possibility that the ‘kite’ would fly free – away from me. That sense of holding, tethering, linked by a string I can control, makes me feel falsely secure. It happens when I attempt to steer my life in a specific direction, thinking that by clutching tightly to the string I have the ability to determine its motion.

Yet, the wind that continued to direct the path of the child’s kite highlighted for me the external circumstances and factors we have no control over. Despite the boy’s best efforts, the wind proved to be a force of nature, a force that remained unaffected by his tugging.

Situations like this happen when our desire for control clashes with the necessary acceptance of the force and direction of life’s events. Say we have planned out our lives for the next five years, outlining where we see ourselves in the workplace and with respect to our close relationships. Then we receive sobering news of natural disasters or illness or the sudden loss of a loved one. We then start to realise there is less within our sphere of control than we had envisioned.

Clinging to our ideas of how things should be and how they should progress leads us into excessive attachment to our projects and desires. There is nothing wrong per se with feeling a sense of investment in how different areas of our lives are progressing. In fact, it shows we care.

But when we start to care too much, when we adopt tunnel vision and only see one outcome as acceptable, we can find ourselves trying to direct the wind instead of letting the wind direct us.

The boy heeded the woman’s advice and did something unexpected and beautiful. He let the string go. A risky venture, considering strong winds could have seized the kite and blown it out of his hands. He rose to the challenge of detachment, surrendering control to the sometimes unreliable and unpredictable wind – and also to the advice of an ‘other’, the woman. I cheered a silent cheer as I watched!

Releasing ourselves from excessive preoccupation with outcomes is not second nature to most of us. The wind scares us. The hypotheticals wage a war in our minds as we conceive of the possible negative outcomes of letting go.

We could lose a person we love, or an opportunity, or both, and with them our sense of security. Examining our loss-oriented perspective reveals that we often fear specific outcomes. As much as we might claim we are ‘cool’ with how things may turn out, intrinsically, we have a personal preference for a particular outcome.

This made me think of the Christian season of Lent which many of us are beginning. It’s all about letting go to open ourselves to something greater: releasing the strings of desire to allow our souls to take flight. Christians throughout the world – as Muslims do in an even more intense way in Ramadan – strive to let go of something (some pleasure or bad habit) as a practical way to rely more on God and less on creature comforts. It is also a form of freedom from the material to help liberate our spirit. Against the ever-growing attachment to possessions in our world, we strive for detachment from them.

The key to detachment is also to adopt a spirit of equal-mindedness – no small feat for sure. To be indifferent both to the kite breaking free from our grip or to its soaring to the sky, still connected to us.

Back in the park, I noted that the woman did not promise the boy that the kite would continue to be ‘his’ to keep. She invited him to simply ‘let it go’. There is a simple beauty in letting the string go, knowing that the kite we love dearly may either fly free or return.

Do you have any such ‘kites’ in your life which you are clinging to dearly? If so, might it be time to slowly, even painfully, release the string? Only then can the kite ascend, flapping wild and free.