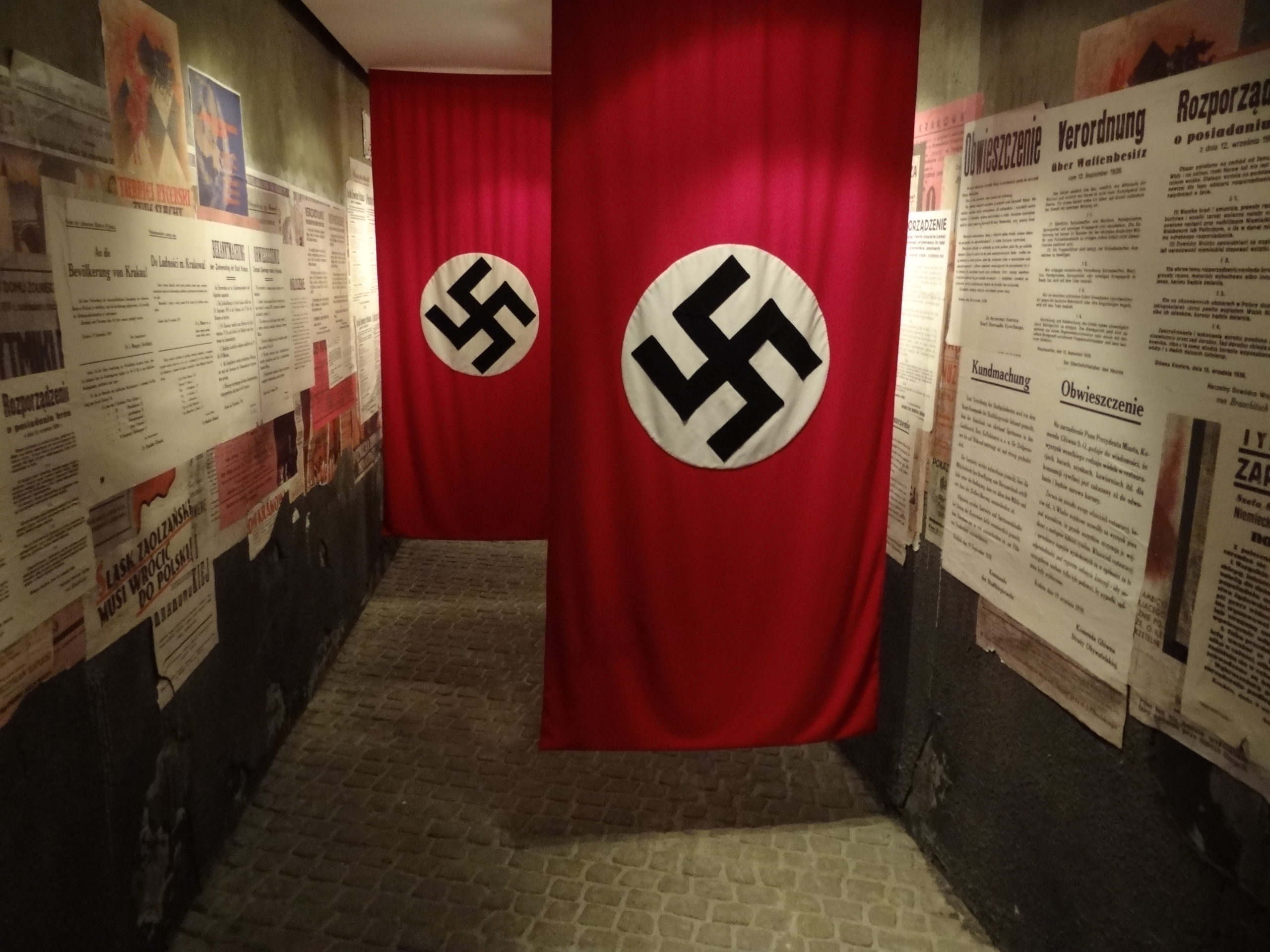 This article follows on from Fighting totalitarianism: lessons from the White Rose resistance Part I

On 1 May 1942, after two years of National Labour Service, Sophie Scholl was finally able to join her brother Hans at Munich University. That night she was introduced to Alex Schmorell and told of the plans he and Hans had been hatching over the previous months to disseminate anti-Nazi leaflets. The following day Sophie asked her boyfriend if he could use his influence as a Luftwaffe officer to requisition a duplicating machine.

On starting her university studies in philosophy and natural science, Sophie entered a world which had become thoroughly Nazified. Munich was the largest university in Germany and like the rest had been purged under the official policy of Gleichschaltung, the enforced conformity that brought public institutions into line with Nazi ideology. The Minister for Culture in Bavaria had told the Munich professors that their job was not to determine whether something was true or not, but whether it was in the spirit of National Socialism. He had been the principal speaker in May 1933 when books deemed unacceptable were thrown onto a large bonfire in the centre of Munich, symbolising the purging of German culture from corruption.

During the months that followed, hundreds of intellectuals were removed from universities across Germany; some academics fled the country, while others went to ground, but the majority simply went along with the new system, or in some cases, such as the philosopher Martin Heidegger, fully approved of Hitler. This state of affairs has been described as la trahison des clercs after the title of the novel The betrayal of the intellectuals (1927) by the French philosopher and novelist Julien Benda.

Membership of the Hitler Youth Movement had been compulsory for several years, so the student body Sophie joined was largely Nazi in attitude and outlook, and Nazi policies were championed in both classroom and corridor. All student groups were strictly supervised by young zealots from the National Socialist Student Union who monitored the words and actions of students and professors alike. The ideological police were ever on the lookout for signs of defeatism, subversion or irreverence towards authority. On entering this world Sophie found that it was possible, by careful choice of subjects, to avoid courses in ‘racial hygiene’ and to outwit the system. Both philosophy and science contained pockets of comparative latitude, and there were other subjects that offered a haven and were receptive to dissidents.

The circle of friends that formed around Alex and Hans was not a formal club with its own rules and membership list, yet it had a well-defined identity and its unspoken standards were recognised by all within it. Those belonging could sense whether someone else should be allowed to join them; as one of them wrote in his diary, “We felt each other out”.

Sophie was immediately welcomed into the circle, thanks to Hans, but others were accepted only with the utmost caution and over time. Fellow dissenters recognised each other when they withheld consent to remarks which were meant to attract approval; they used the term ‘Nazi’ because of its derogatory connotation, rather than dignifying it with the label ‘National Socialism’; they avoided, if possible, giving the ‘Heil Hitler’ salute; in conversation, if a wary exchange continued, code words were offered and deciphered on both sides until the moment came when, as one of them said,

“We understand each other”.

Hans was also able to introduce Sophie to academic and literary dissidents that he had met through Carl Muth, the founding editor of the leading anti-Nazi journal Hochland (Highland), which the regime had closed down the previous year. The theologians, philosophers and other writers associated with Hochland helped the young students heighten their awareness of National Socialism’s wholesale threat to individual and collective morality and its perversion of human values. Muth in particular was delighted to get to know the younger dissidents, to explore their aspirations, to enlighten and to encourage them by means of serious conversation and correspondence. In turn, the younger generation helped Muth not to lose hope; for him they represented a ‘secret Germany’ who could uphold and pass on the values he cherished, the preservation of which he had made his life’s work.

In June 1942, Hitler’s Wehrmacht began its great summer offensive on the eastern front, and towards the end of July, Hans and his friends from the medical company in Munich were ordered to move to the front. It was in the build-up to their departure that the four White Rose leaflets were written.

The first was 800 words in length and double-spaced, written in the style of a magazine article rather than as a rousing summons to the barricades. Around one hundred copies were made and they were posted to addresses copied out from a Munich telephone directory; in this way they would have reached the educated classes.

The authors were idealists who knew that the regime could not be toppled by anything but force, yet they wanted to make a start at eroding the faith of their fellow Germans in the leadership and to let other dissidents know that they were not alone, and that the monolith of public support for the regime was a mere propaganda exercise. Essentially, Hans and Alex wanted to shake up and awaken their fellow Germans.

Most loyal ‘national comrades’ would have dutifully handed in the leaflets to the Gestapo, as it was an offence not to do so. But some of the recipients were students and as a result the leaflets were passed around the University, where they caused intense excitement within the student body. Not since the early days when Hitler came to power had there been anything as openly anti-Nazi as this.

More strident and polemical in tone than the first, the second leaflet stated that the regime was engaged in genocide on a large scale in Eastern Europe, and it challenged the German people for offering blind allegiance to a criminal regime. This was one of the most sweeping indictments of the German people to go on record inside Germany by Germans, and it unambiguously confronted Hans’ countrymen with their collective guilt. By the end of the war it became apparent that this was the only resistance leaflet to record details of the Holocaust while it was actually taking place.

The third leaflet followed hard on the heels of the second and contrasted the evil of Nazism with the good of Christianity. Although it again recommended ‘passive resistance’, it was distinctly provocative by suggesting different forms of ‘sabotage’ whose aim was to topple the Führer. It was effectively urging high treason.

The fourth leaflet struck a different tone. No longer was ‘civil freedom’ the predominant theme, rather its great message was that of war as a cosmic struggle between heaven and hell for the soul of man. Crucially, it was written the day after the students had attended a long meeting led by Theodor Haecker, the German authority on Sören Kierkegaard and John Henry Newman. Haecker spoke about the metaphysical background of the war: about fallen angels and pure spirits, the driving forces of history, of God and the devil, and of the appearance of the Antichrist in the last days of history. The impulsive and spirited Hans took up this cluster of apocalyptic images and used it to draw up this fourth leaflet.

The Gestapo were now convinced that they were dealing with a large organisation, possibly aided by the Allies.

On 23 July Sophie said goodbye to Hans and Alex, who were now setting off for the Russian front for a three-month stint of duty. New leaflets would appear on their return.

Dr Paul Shrimpton is the author, Conscience before Conformity: Hans and Sophie Scholl and the White Rose resistance in Nazi Germany (2018: Gracewing). This is the second of three articles written exclusively for Adamah. To read the first article, go to: https://adamah.media/2019/12/02/fighting-totalitarianism-lessons-from-the-white-rose-resistance/

To read the third and final part of this series of articles click here.

Dr Paul Shrimpton is a teacher at Magdalen College School, Oxford, and an historian of education. He has been researching the educational ideas and practice of John Henry Newman for three decades, and his published works include The ‘Making of Men’: The Idea and Reality of Newman’s University in Oxford and Dublin (2014), and Conscience before conformity: Hans and Sophie Scholl and the White Rose resistance in Nazi Germany (2018).