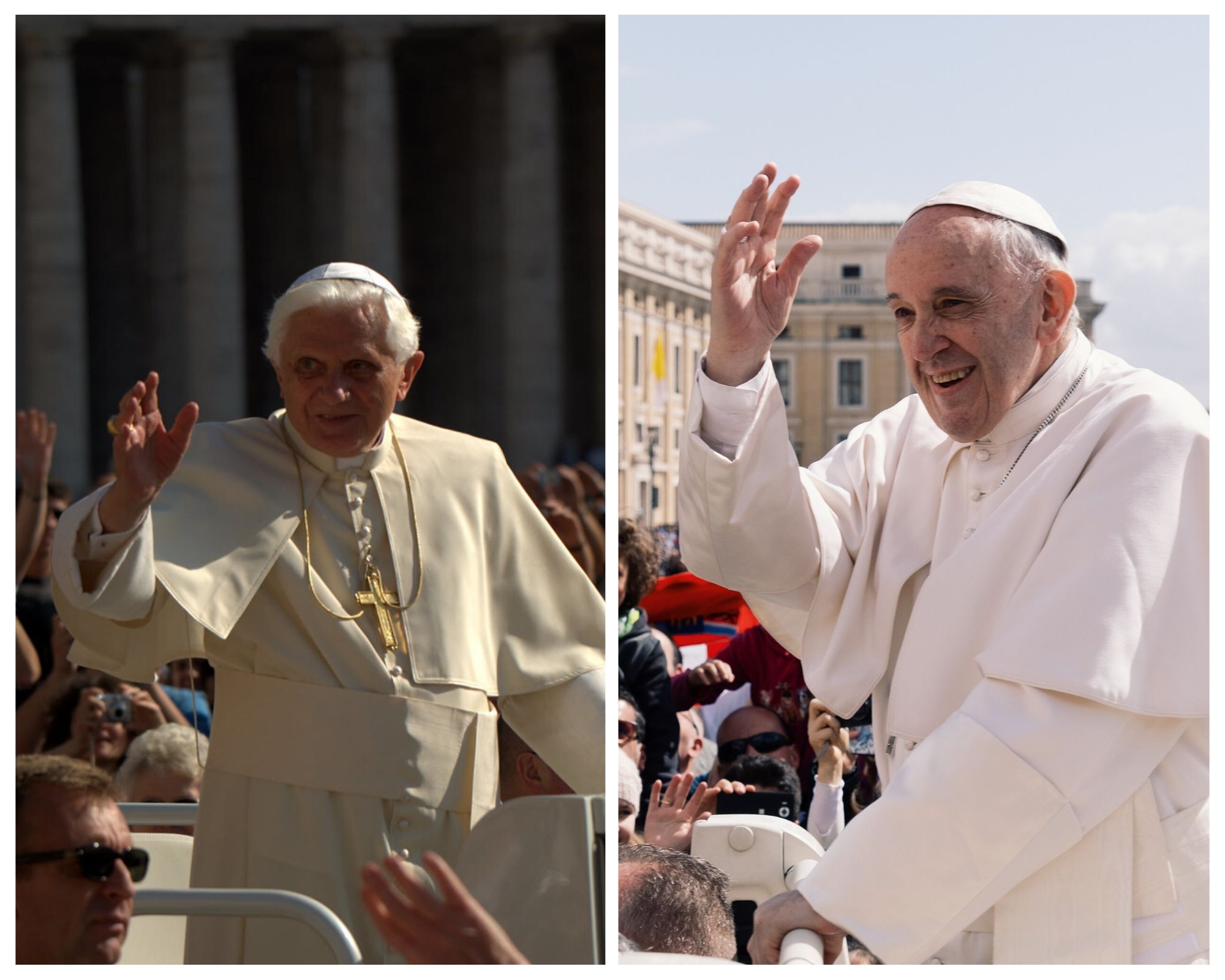 Before reviewing a film about The Two Popes, I feel a need to declare an interest … I go back a long way with one of them.

As a student of Italian language and literature in the mid-1980s at Rome’s La Sapienza University, I was culturally enriched but materially impoverished. So poor in fact that I couldn’t afford to sit down in a bar (it costs more in Italy!) and so learned the joys of al fresco eating by necessity.

One of the nicer spots to enjoy a panino con prosciutto e formaggio (a ham and cheese roll sounds so much better in Italian) was on the steps, under the colonnades of St Peter’s Square. And it was from there, every day without fail, that I would see one of the two Popes walk past.

Of course Cardinal Ratzinger wasn’t Pope at the time – he was the Prefect of the Congregation for the Doctrine of the Faith – and each lunchtime he would leave his office and go home for a bite of lunch.  Each day I would see him approach. He was a well-known and controversial figure even then, often attacked in the papers for his alleged “panzerkardinal” approach to dissenting theologians and apparently harsh ways with liberal bishops.

Yet here he came, a small, slightly curved figure in a plain black soutane, with a French-style beret covering his shock of white hair. Shyly raising his eyes only to those who greeted him en passant.

Years later, I got to know bishops who had been received by the “German Shepherd”.  Often they had attended their first meeting in trepidation, only to be amazed at the sweetness, gentility and humility of the man whose civility clashed so radically with the media-created image.

I mention this personal anecdote only to justify one of my (few) criticisms of this rather good film. Namely that the characters are portrayed rather too starkly … Pope Benedict comes across initially as the almost machine-like traditionalist attempting to make small talk in Latin during the tea-break at a meeting of Cardinals.  He is seen as a stickler for protocol; somewhat elite in taste and rather negative in his view of the world.

By contrast, Jorge Bergoglio – the future Pope Francis – is also impoverished by the “good pope bad pope” dichotomy.  The complexity of his personality is somewhat lost in his depiction as an almost Forrest Gump-esque character, happier to chat to the palace gardener than the Cardinals of the papal household.

The reality is that in many ways in real life Pope Francis is a much tougher character than Pope Benedict.

I refer not only to his capacity to show displeasure in public (he has given the Vatican curia a bruising ticking-off in public almost every year since his election and can be impatient with those who try to pull him over during walkabouts, as was recently highlighted in a youtube video which went viral) but also to his style of government.

Francis is a rich and complex character. He is all for the devolution of power away from the centre of the Church but is also in many ways the Papa Re – the Pope king – who is not afraid to overhaul the apparatus around him to allow his own vision of the papacy to take root.

On the other hand, the apparently uber-traditional Benedict is in fact an ultra-revolutionary – the first Pope to abdicate since Gregory XII in 1415.

But these are criticisms of ecclesiology perhaps, rather than of cinematography.  For in cinematographic terms there can be no doubt this is a well-produced movie.

The sets are truly magnificent – Bernini helped of course in providing a magnificent stage for this powerful drama back in the 17th century – but the two “big conversations” of the film take place in the Vatican Gardens at Castel Gandolfo and the Sistine Chapel.

Knowing both spaces, I found it impossible to decide, as I watched the film, whether the cast had been given special access to them or had just been lucky enough to work with the best set-builders in the game. (In fact it is the latter).

The attention to detail is spectacular … The coat of arms on Benedict’s papal sash is perfectly sewn; the text of the cardinals’ promise as they cast their vote in the papal election is pronounced in perfect Latin and even the Pope-Emeritus’ predilection for Fanta orange is included.

There will be some who criticise this film for simplifying complex arguments.  They are right in a way, but to do so is to forget that this is a Netflix film aimed at mass market audiences most of whom will have little insight or interest in the minutiae of Vatican politics or doctrinal divergences.

Director Fernando Meirelles does a fine job to capture the issues, the worldviews, the personalities of the two Popes and the context of the extraordinary time in which the film is set.

He cleverly uses two imagined conversations between the Archbishop of Buenos Aires Jorge Bergoglio and the Bishop of Rome (Josef Ratzinger) to sketch the issues facing the Catholic Church and the wider world … issues of poverty; the role of faith in public life; church and politics and human sexuality among others.

While the conversations are not claimed to be true, they illustrate in broad-brush terms the issues and the various pastoral approaches the Catholic Church employs to respond to them. They reflect more or less accurately the visions of the two Popes.

And then there are the actors … Jonathan Pryce quite simply IS Pope Francis for the duration of the film – the physical likeness is uncanny and he inhabits the role masterfully.  Anthony Hopkins is also on top form as Pope Benedict, although not quite so convincing as his colleague in bringing the true character to life on screen.

This is a film to be enjoyed – as a film, not a documentary. It is full of gentle humour, words of wisdom, beautiful locations and ultimately two loveable and admirable characters both of whom want to what is best for the Church and the world.

And that is perhaps where the film succeeds … because for all the initial depiction of Papa Ratzinger as the pantomime baddy and Papa Bergoglio as the knight in shining armour, it ends with a portrayal of two elderly men, sharing their experiences, united by their love for what they hold to be true.