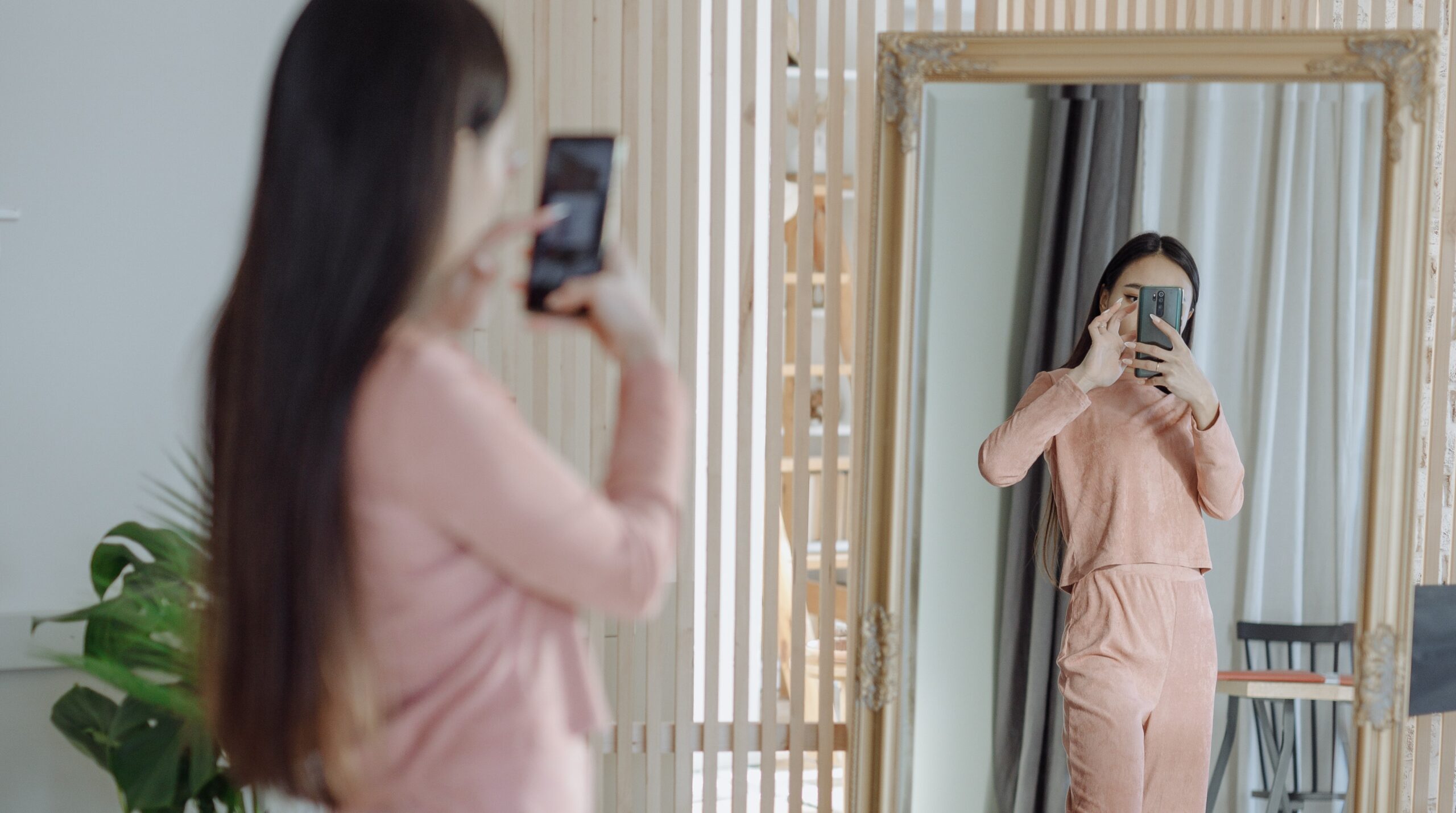 What possible harm could a minute-long video actually do? The recent backlash against video-sharing social networking service TikTok suggests the answer is, rather a lot.

In February, a disturbing Instagram post by journalist Danae Mercer called out the platform for promoting a negative body image and eating disorders. She sought to upend the myths around the perfect body which abound on social media, as images that are in fact ‘incredibly filtered, posed, and perfected’.

If all social media platforms focus on unrealistic body ideals, what is it that characterises TikTok’s particular contribution to the problem? Whether you’ve engaged with TikTok or not, you may be aware of its penchant for trends and challenges, ranging from the musical to the magical. Most have light-hearted intentions and outcomes, but some can have dangerous repercussions if misused or taken to extremes.

Stories of various TikTok challenges gone wrong have been hitting the headlines, but perhaps even more sinister is the unseen damage of the challenges and trends promoting body-shaming, such as the infamous earphone challenge, which involved users wrapping earphones around their waists to prove their skinniness, or the back profile challenge, in which users took videos of themselves with their back facing the camera before filming their reactions to watching the footage. While many were content with this back view of themselves, some were distinctly unhappy, leading to greater angst and insecurity.

When you consider that, from its inception, TikTok’s creators chose users aged under 18 as their target audience, alongside the fact that its female users outnumber its male users, these trends take on a new, concerning dimension.

It is no great revelation that teenage girls are the most susceptible to early-formed ideas about what is normal and abnormal within their developing bodies, but it is important that society recognise this is no trivial matter.

As eating disorder campaigner Hope Virgo has remarked: “While eating disorders aren’t necessarily caused by bad body image, we know there are some intrinsic links.”

The issue has never been more relevant. In my own country, for example, a surge in referrals for eating disorders during England’s national lockdown and the recent tragic death of UK Big Brother star Nikki Grahame have highlighted the insidious way in which such illnesses thrive in isolation.

Coupled with the disturbing challenges mentioned above, TikTok has come under fire for its adverts promoting fasting apps and weight loss supplements, as well as the proliferation of what some have described as pro-anorexia TikTok accounts.

Thankfully, the considerable criticism surrounding these concerning trends has forced TikTok to take concrete action. From introducing new ad policies that restrict adverts promoting harmful or negative body image to partnering with the National Eating Disorder Association (NEDA) to directly connect users to important resources from the app, significant changes have been made.

For some, this has signalled a vital move away from the murky reputation microblogging and social networking website Tumblr acquired or the one that photo and video sharing social networking service Instagram is fast acquiring for their association with diet culture and pro-anorexia content.

As artist Sophy Robson told me: “TikTok is the backlash to the perfection of Instagram we’ve all been looking for,” explaining how she’d never encountered the concept of ‘midsize’ before using TikTok. Here she is pointing to the presence of content on TikTok that is aimed at more diverse body-types, such as accounts that celebrate normal bodies in all their wobbly wonder.

The term ‘midsize’ was coined by Anushka Moore on her Instagram account @midsizecollective to celebrate the space between petite and plus-sized. The hashtag ‘midsize’ has had 730.8M views on TikTok.

For some, the terminology around reclaiming normal-sized bodies is liberating, but for 21-year-old Rachel (renamed for the sake of anonymity), who has struggled with poor body image for years and decided to delete the app over a month ago, the jargon around different sized bodies was confusing and distressing:  “When I was on TikTok I was very conflicted over what my size actually was. I’d see a girl my size and, in the comments, people would praise her for being skinny but then a few videos later a girl of the same size would be called plus size.” Could the label ‘midsize’ offer reassurance or simply elicit similar insecurities by creating more arbitrary labels for our bodies on which to fixate? Perhaps only time will tell …

Reflecting on her decision to stop using the app completely, Rachel emphasised the lack of control over what she would typically see when scrolling through the curated For You Page, which is based on TikTok algorithms designed to present users with a collection of videos that they should enjoy, based on their previous behaviour on the app.

19-year-old Rosa Bown, a regular TikTok user who struggles with her body image, tells me she thinks ‘the algorithm favours girls with tiny thighs and tiny waists’.

Certainly, the short-form video format of the app means we interact with far more content than on lots of other apps and thus provide considerable feedback, which can lead to a very ‘homogeneous stream of information’.

Rachel suggests that the option to completely mute a whole topic or trend would give users some much-needed autonomy over the content they are consuming.

The 21-year-old eating disorder recovery advocate and writer Emily Bashforth agrees: “When I’m struggling with my own body image or relationship with food, scrolling through the app isn’t the healthiest use of my time when I don’t know what type of triggering content might pop up.”

For Rachel, the most triggering content that kept appearing on her feed was the ‘what I eat in a day’ videos, which were promoting and glamourising under-eating through examples of strictly controlled diets.

The good news is that, increasingly, this video format is being reclaimed by a profusion of pro-recovery accounts, where girls document their eating disorder recovery journeys both to motivate themselves and to offer support to others who are struggling with the issue. Rather than encouraging low calorie diets, these videos involve confronting ‘fear foods’ they had avoided whilst in the throes of their eating disorders.

Some of these accounts have gained a large following and media attention and receive messages of thanks for literally saving the lives of fellow sufferers, not only through raising awareness but through creating a safe space of sharing.

The trouble is, of course, that the content under the umbrella ‘What I Eat in a Day’ hashtag is a mixture of videos encouraging restricted diets for weight loss and the pro-recovery posts mentioned above. Thus, triggering content sits side by side with recovery posts.

I have no doubt that these pro-recovery ‘What I Eat in a Day’ videos are helpful for some. I notice comments being left by viewers who have chosen to eat something as a result of watching the video. There is a fine line, however, between providing motivation to eat and encouraging users to follow the same behavioural patterns that characterise eating disorders. As Emily states: “I personally do not find ‘What I Eat in a Day’ videos helpful or encouraging for my recovery, especially after I’ve already spent a long time comparing what I eat with what other people eat.”

There is other content on these accounts that might harm more than help, despite the best intentions of the creators. Certain ‘before and after’ videos I come across arguably fall into dangerous territory by simplifying the long, complex journey to recovery by implying, as Emily suggests, ‘that recovery is solely about weight gain’, and generally ‘promoting a false understanding of what recovery is’.

Another concern lies with the structure of reliance these accounts create for those using the platform to support their journey to recovery. After all, TikTok’s crackdown on accounts that promote disordered eating habits may have the unintended consequence of blocking content that could aid recovery, as both use similar hashtags related to eating disorders. The impact of this sudden removal of pro-recovery content could be drastic. In a recent I-D article on this issue, sociologist Ysabel Gerrard states bluntly that it could ‘kill someone’.

In one sense, it is reassuring that TikTok’s new recovery community can provide such significant support. In another, the implications of Gerrard’s assertion are deeply disturbing. And is it justifiable to place this level of pressure on the creators of pro-recovery content, who are themselves recovering from a serious illness, to expect them to aid the recovery of others?

Furthermore, as well as TikTok inadvertently removing recovery content, there are a number of reasons the creators might do so themselves. It might be out of pure boredom or, on feeling their lack of progress in their own recovery journey, they might consider their advice to other sufferers hypocritical and so withdraw it. By Gerrard’s logic, should we hold them accountable for the mortal consequences that might arise? It’s a difficult moral path to navigate.

It is not only the videos themselves which can be problematic, but the momentary interactions in the comments section. It is very apparent that there are lots of things you shouldn’t say to somebody with an eating disorder, passing comments that you may think are funny or helpful, but can have a detrimental impact on the individual’s recovery.

Most of the comments are kind and supportive but some are nasty while many others seek advice on recovery. To what extent is it the place of those running these recovery accounts to give advice, to respond to nasty comments, to be the face of an illness that is by its very nature an intensely personal one?

Are we creating a generation raised by a social media platform, brought up and advised by similarly confused peers rather than parental, educational, or professional figures?

I asked at the beginning of this article what harm a minute long video could do, but of course TikTok’s short video format commands us to consume one video after another. ‘10 more minutes’ becomes another hour and we surface from the suffocating waters of self-comparison amazed that so much time has elapsed. For reference, 52 minutes per day is the average amount of time users spend on the platform.

The myth of the internet suggests that we are posting into a void, but this is never the case. As Emily so wisely summarises: “I think anyone wanting to share their story is always a brave and important thing, but there’s definitely a way to do it safely because, regardless of whether we’re struggling ourselves, we all have a responsibility to others online.”