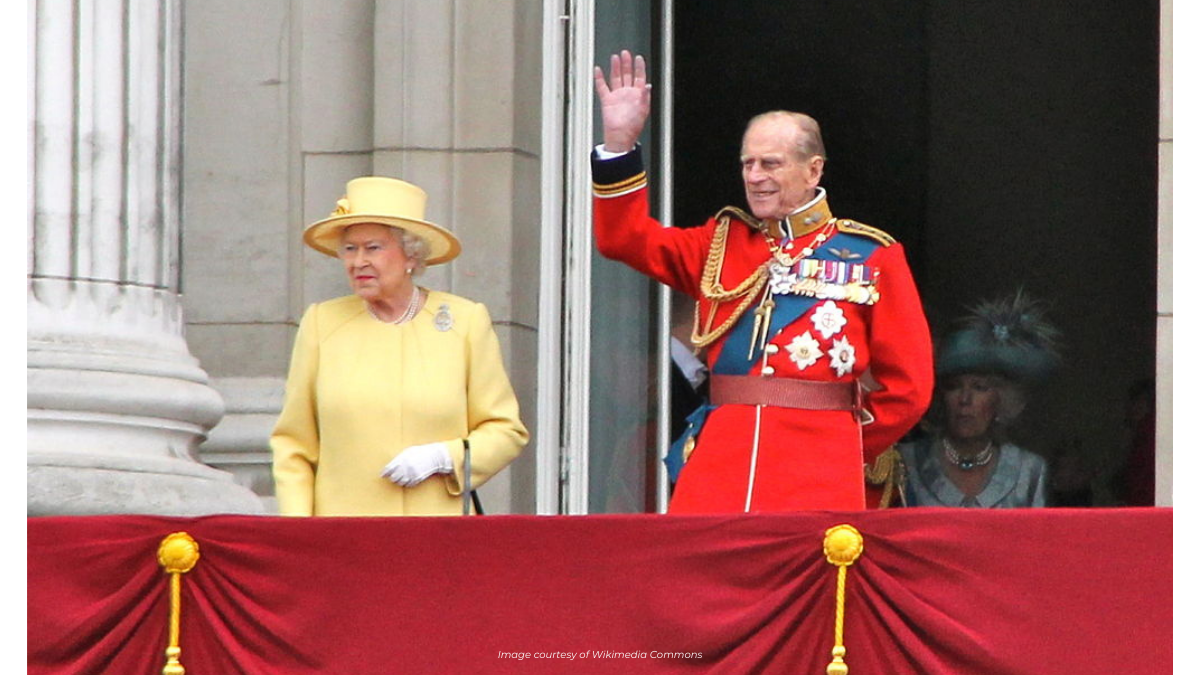 The passing of Prince Philip marks not only the end of an era, but, as Alex Osborn notes, raises important questions about the future of the British Royal Family.

In July 1939, a 13-year-old girl and an 18-year-old man meet at Britannia Royal Naval College in Dartmouth. As it happens, the two are third cousins.

The man is strikingly handsome, with Viking good looks – tall, blond, athletic, and with seemingly boundless energy. Sporting his naval cadet uniform and cap, he cuts a dashing and glamorous figure. The girl is certainly pretty, yet rather more reserved – in spite of her age, she is child-like in appearance, dressed in low white socks and with a matching coat and hat identical to that worn by her eight-year-old sister.

Following an outbreak of measles at the College, the young man has been tasked with chaperoning the sisters while the girls’ parents dutifully plough through the official introductions and inspections associated with their visit. He has an appetite for high-spirited horseplay, and suggests they liven things up by jumping the College’s tennis nets. She is smitten by his display of physical prowess – “look how high he can jump, Crawfie!” she remarks rapturously to her governess.

Thus is recounted the first significant encounter of Princess Elizabeth, heiress to the British throne, and the exiled Prince Philip of Greece and Denmark, who died last month only nine weeks shy of his 100th birthday. This meeting sparked a romance which resulted in a royal union lasting 73 years.

Many close to the Queen concede that she could not have achieved all that she has in her near 70-year reign without having had the Duke of Edinburgh at her side. In what ways can we, and should we, assess the legacy of the longest-serving consort in British history?

The role of a male consort to a female sovereign is a particularly challenging one. This is partly because much of the role remains undefined, as is the case with most ‘supporting’ positions within the British Royal Family, and partly because the male consort has to contend with the predicament of remaining subordinate to his wife in a society where convention has traditionally dictated that the dominant position in a marriage belongs to the husband.

It was certainly no easy feat for Philip who, at the Queen’s accession and at the relatively young age of 30, faced a life of endless plaque unveiling and ribbon cutting after having relinquished a highly promising naval career.

In his new role, the foremost example to which the young Prince Philip could have looked for inspiration was Prince Albert, husband and consort to Queen Victoria. Albert was a tremendous source of support to Victoria both personally and ‘professionally’. Having an enormous capacity for intellectual stimulation across an astonishing variety of disciplines, Albert’s interest in the general advancement of science, technology and culture, and the importance of accessible education, led to his patronage of the Great Exhibition, the re-administration of the Royal Collection and the founding of Imperial College London, amongst many other achievements.

Albert’s legacy is enshrined today in vast cultural monuments such as the Royal Albert Hall and the Victoria and Albert Museum, and he is credited with establishing the modern model of constitutional monarchy in Britain, via his insistence that his wife remain above party politics despite her obvious personal preferences.

Yet Albert ultimately worked himself into an early grave, dying of typhoid fever at the age of just 42, having spent the best part of two decades as the Queen’s de facto private secretary. Such was his enthusiastic involvement (or interference!) in the Queen’s official duties that the Clerk to the Privy Council once remarked, somewhat cattily, that Albert ‘is King to all intents and purposes.’

Victoria’s inability, or some would argue, refusal, to recover from her husband’s untimely death has come to symbolise the importance of the consort’s role in equipping the sovereign with the resources necessary to cope with the demands of a fundamentally isolating position.

Whether consciously or not, Philip appeared to select the best elements of Albert’s example while recognising the natural limitations and boundaries imposed by his role.

He was to walk two steps behind his wife, not beside her in the manner of a joint sovereign as Albert had done.

In the antiquated words of the oath he took at the Queen’s coronation in 1953, Philip was to become his wife’s ‘liege man of life and limb’ – the ‘top job’, as Princess Diana once called it, was and always would be hers. Unlike Albert, Philip never held audiences with government ministers in place of his wife, never specifically advised the Queen on political matters nor did he ever access state or Cabinet papers. Perhaps tellingly, he was never awarded the official title of ‘Prince Consort’ as Albert had been.

Yet Philip recognised that he could effectively support and complement the Queen’s work by channelling his natural leadership skills into the kind of worthwhile causes to which his predecessor had devoted so much of his energy a century earlier. Both Philip and Albert took to the presidency of the British Association for the Advancement of Science with gusto, and in his inaugural speech, Philip reviewed scientific progress since the time of the former consort in whose steps he walked.

In his long life Philip lent his patronage to some 800 organisations, most of which had a similar focus on education, innovation, industry and conservation. His now world-famous Duke of Edinburgh’s Award Scheme had a distinctly Albertian flavour, being founded to encourage the self-development and moral improvement of young people as modelled on the ideas of Philip’s old headmaster at Gordonstoun, Kurt Hahn, and his solutions to what he had termed the ‘Six Declines of Modern Youth’.

What impact will Philip’s death have on the future direction of the British monarchy?

It is a question which royalists and republicans alike are asking, given that most people alive today cannot remember a time when the indefatigable double-act of the Queen and Prince Philip was not at the centre of public life.

Perhaps we should see the monarchy’s future as a continuation of Philip’s vision of an institution which ultimately develops what Albert had envisaged and what Philip himself embodied throughout his six decades of public service – a monarchy which is fit for the modern age, and reflects contemporary values in the attitudes and activities of its members.

One of Albert’s achievements was to erase the monarchy’s reputation for excess and immorality, and create an aspirational ideal for ordinary people by ensuring the Royal Family mirrored the family lives of its subjects and by promoting values associated with wholesome Victorian middle-class domesticity.

Like Albert, Philip had a sincere passion for eradicating outdated and wasteful aristocratic practices at court, and contributed significantly to the modernising of operations and improvement of efficiency at Buckingham Palace. He was also a strong advocate for enabling the public to access the more human side of the monarchy – such as his insistence as Chair of the Queen’s Coronation Committee that the coronation ceremony be televised, and his oversight of the TV documentary ‘Royal Family’ in 1969, a behind-the-scenes film which depicted the Queen, her husband and her children interacting with each other in comparatively ‘normal’ family settings.

A perennial problem facing any modern monarchy is how to exist successfully within the tension that the Royal Family is at once a family and not a family, at once ‘normal’, and not ‘normal’.

It is a conflict which no individual even as enlightened as either Albert or Philip could possibly hope to resolve satisfactorily in the course of a lifetime.

How does one ensure the monarchy is of the people in the broadest sense, yet remains sufficiently apart from the people to ensure its survival? As Prince Philip’s generation passes on, younger generations of royals offer contrasting interpretations of the nature of public service and the costs involved in subordinating one’s own personal ambitions, and expectations, to the operations and values of an institution.

At the Duke of Edinburgh’s pared-down funeral service at St George’s Chapel in Windsor, and faced with the poignant image of the widowed Queen seated alone, we were reminded most forcibly that like Albert before him, his many achievements as consort aside, perhaps Prince Philip’s most important act of service was that of husband to the most famous woman in the world.

As the Queen’s ‘strength and stay’, as she put it on the occasion of their Golden Wedding anniversary, Philip was the one person who, from that first meeting at Dartmouth to the end of his life, could – and indeed did – treat the Queen like any other human being. It is little wonder then that the Queen has privately remarked that the Duke’s passing has left a ‘huge void’ in her life.

This was, after all, the man who upon their return to Buckingham Palace after the Coronation ceremony had turned to the newly-crowned Queen and remarked: “Darling, where did you get that hat?”