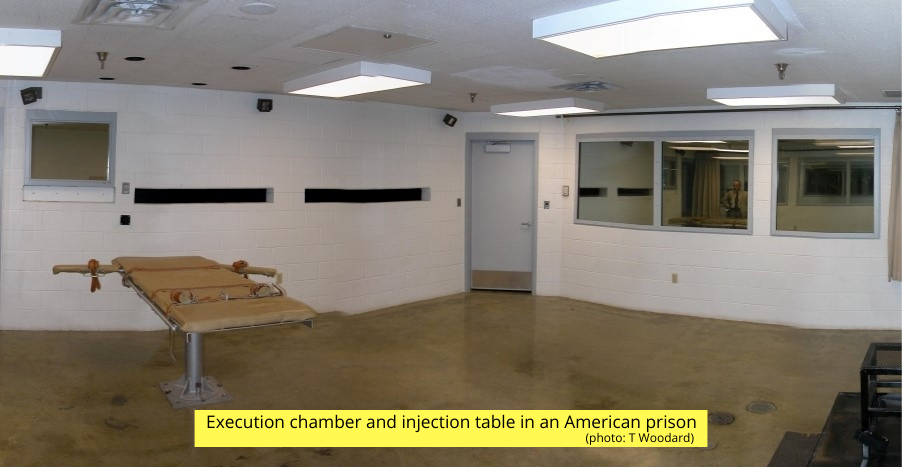 The execution of Lisa Montgomery must be a wake-up call to America, argues Monica Amendola, who sees the state-sponsored killing of citizens as a grim practice which has had its day.

Raped by her father and his workmates from the age of 11, threatened with a gun and forced to prostitute herself by a mother looking for a way to pay the plumber and the electrician, and later sterilised against her will. It is little wonder Lisa Montgomery’s life took a terrible and tragic turn, culminating in a particularly atrocious murder, perhaps the most horrific in modern US criminal history.

Montgomery killed 23-year-old Bobbie Jo Stinnett in the northwest Missouri town of Skidmore in 2004. She used a rope to strangle Stinnett, who was eight months pregnant at the time, and then cut the baby girl from the womb with a kitchen knife. Montgomery took the child with her and attempted to pass the baby off as her own.

Lisa Montgomery’s own end was horrific too, though this time the killer was not a damaged and deranged human being but the formal procedures of the United States of America, sanctioned by that country’s highest legislature – the Supreme Court.

Eyewitness reports are distressing: her lawyer, Kelly Henry, said that Montgomery was ‘denied a prayer with her spiritual adviser’ prior to her death. Her request to have her Assemblies of God pastor, John Francisco, standing with her in the execution chamber was refused. Another of her lawyers referred to it as a ‘needless indignity and a deprivation of really her basic humanity… he could have provided comfort and a prayer’.

It would seem that Montgomery declined the offer to say any final words before her execution. Instead, she tapped her fingers nervously for several seconds, revealing a heart-shaped tattoo on her thumb. Otherwise, she showed no signs of distress and quickly closed her eyes.

As the lethal injection began, the 52-year-old kept licking her lips and gasped briefly as the deadly pentobarbital entered her body through IVs on both arms.

Her execution has reopened an old debate about capital punishment.

Given the circumstances of the murder, it is easy to understand how dangerous a person she was seen to be, but a consideration of the exceptional circumstances of her youth raises doubts about how severely a society could judge her.

Because, without any doubt, Jo Stinnet’s murder was so barbaric that for many it is easy to ask what other punishment could equal the crime.

For those who concentrate their attention on Montgomery’s cruelty, even life imprisonment would seem too mild. And many would feel more protected knowing that such a criminal is no longer in the world.

This way of thinking is not new, the death penalty has been widely used for centuries. Even  a philosopher like Immanuel Kant in 18th century Germany wrote in favour of capital punishment, following the same thought process: he was convinced that the punishment had to be proportionate to the crime. And following that eye-for-an-eye logic, what else can equal a murder if not murder itself?

But if this view could seem natural in the 1700s, it was not universal.

In the same period as Kant was defending the practice, Cesare Beccaria wrote a short essay against capital punishment in Italy, with considerations still considered valid today.

In his “On Crimes And Punishments”, he appealed for its abolition due to its inefficiency in reducing the crime rate. More specifically, according to Beccaria the punishment needs to be a deterrent, for which purpose it is not necessary to inflict death. More effective for this purpose is an immediate punishment inflicted in due time, rather than a stronger one administered later.

Of course, he insisted too on making the punishment proportionate to the crime, but focused on its immediacy rather than its intensity. Moreover, and herein lies Beccaria’s most most modern argument, capital punishment is based on the idea that murder is a crime… punishable by another crime!

Probably inspired by this short but effective essay, Italy decided to abolish the death penalty relatively early compared to other countries, in 1889.

Today one hears these same arguments inspiring those who oppose capital punishment, perhaps also influenced by the Gospel call, more ancient than Beccaria’s essay, to forgive rather than seek vengeance.

Most modern societies now consider it inappropriate to end someone else’s life in any circumstance other than self-defence as a very last resort. As many people still argue, state-sponsored execution is like teaching children not to hit others by hitting them.

If the purpose of a punishment is to keep a criminal far from society, prison is more than able to provide that protection.

An interesting case in point is how the Catholic Church has changed its position on the subject over the years, becoming ever more critical of capital punishment. After having accepted it for centuries, like the rest of Europe, in the 20th century the Church undertook a thorough reflection on the matter, leading to accept it less and less until its official condemnation by Pope Francis in 2018.

Since the Second Vatican Council, Pope John Paul II and Pope Francis in particular advocated that capital punishment is ‘an attack on the inviolability and dignity of the person’, as Pope Francis put it in 2018. The Church is now at the forefront of efforts to abolish death penalty throughout the world.

The logic behind the Church’s definitive rejection of capital punishment is the view that the taking of life can only ever be for self-defence in the absolute last resort, when no other means can be found to protect oneself or others. Such means, the Church judges, now always exist. The death penalty no longer serves a purpose and today only has a vindictive or deterrent end. The former is a wrong motive, the latter insufficient.

In 1948 the United Nation signed the Universal Declaration of Human Rights, to avoid the repetition of the mass murders perpetrated especially during the Second World War. This declaration is still considered a powerful guiding text in our society. In particular, its third article which states the right, for all humans, to ‘life, liberty and security of person’.

This declaration and the Catholic Church’s Catechism both seem to be living testimonies of the definite abandonment of the law of retaliation, at least in Europe.

It is therefore disturbing and alarming to see the continuation of the practice of execution in countries which claim to be democratic, as well as the residual support for the death penalty in opinion polls.

For Lisa Montgomery and others like her, such arguments are now academic. She was killed by a state which considers itself to be a bastion of civilisation. And while no-one can fail to be horrified by her crime, it is to be hoped that the pledge of the incoming President to abolish federal death sentences will mean an end is in sight, also in America, to the practice of the state killing its own people.