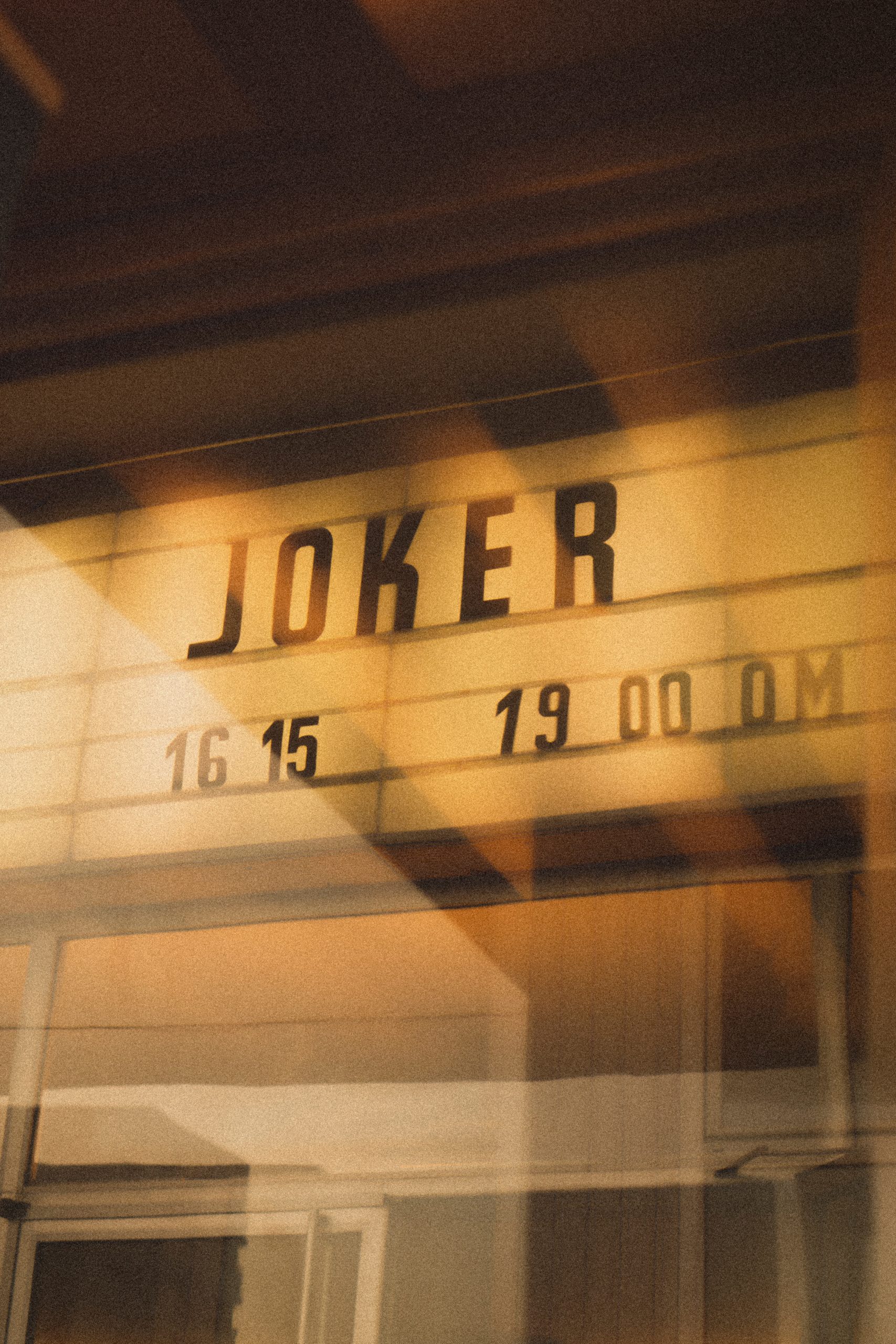 “Why so serious?” Remember those adolescent days when your friends would repeat this with irritating insistence? While such a question might seem derogatory when referring to a joker, it’s one I really wish Todd Phillips, the director of the movie of the same name, would answer.

There’s a lot to praise in 2019’s Joker but the sad fact is that the film is unremittingly grim, with an emotional weight that is too heavy to justify. Not only that – it is so unwaveringly solipsistic, so devoted to the spiral of pain and suffering going on in Arthur Fleck’s head and spilling out into his life, that it fails to give us a reason to listen or learn.

When I left the cinema, drained and yet strangely exhilarated, I initially thought that it was a positive reaction due to a truly incredible film. But on further reflection I wonder whether I had been experiencing the cinematic version of Stockholm Syndrome.

The bleakness is in some ways unsurprising, considering that the storyline takes inspiration from Alan Moore’s 1988 graphic novel Batman: The Killing Joke, which gave birth to the modern incarnation of the Joker and also gave him his best known origin story. This was the graphic novel in which Barbara Gordon is shot and paralysed, then nude pictures of her are taken by the Joker in order to torture a captive Jim Gordon – for what? To prove to Batman that everyone was vulnerable to madness, that all it took to turn into a Joker was one bad day.

It’s a singularly breathtaking claim if you stop to think about it. Can one bad day really break a man’s mind so badly that all previous sense of morality or social boundary is erased?

Moore has long disavowed himself of The Killing Joke, stressing that there was no link to reality in his work, that there was ‘no real human importance’ to it. It’s a criticism that I feel can still be levelled at the film, which runs with the same idea from the 1988 graphic novel.

That sense of ‘human importance’ is vital to how we criticise and evaluate films. What differentiates art from entertainment is how well we remember it, how much it troubles our thoughts, how much of a challenge it throws at our beliefs.

That’s why Martin Scorsese (Taxi Driver, King of Comedy, Goodfellas) bemoaned the Marvel Cinematic Universe movies as ‘not cinema’. It’s why Francis Ford Coppola (The Godfather, Apocalypse Now) doubled down and called MCU movies ‘despicable’. If you consider the complex villains offered by these legendary directors against the villain of Arthur Fleck, you begin to realise that there is absolutely no depth of character, no humanity, despite Joaquin Phoenix’s stunning performance as the lead character.

He is scorned by a mother on a bus because he tried to make her child laugh. He is ignored by a woman he finds attractive and this leads him to fantasise an alternate reality. He is (note the irony) laughed at by his peers and his colleagues. These are indeed real problems that exist in the world. But on screen, the diffuse depiction of crisis and challenge leads to weak storytelling and non-existent character progression.

Joker is thus already limited in scope as to how much the character can progress. What about the rest of the plot?

An interesting way that Philips tried to avoid excessive restrictions to the plot was by removing the character of Batman altogether. Without a literal hero, the audience is free to invest its emotions in Arthur’s story. This is effective and necessary because Joaquin Phoenix is mesmerising. He dominates every scene, almost blotting out everything else with the intensity of his presence.

With so much screen time being given to Phoenix despite the relatively few lines of dialogue, it makes sense that Arthur’s story be told more through his body than through his words. At the beginning of the film, Phoenix’s movement is stiff, recalling Charlie Chaplin-esque slapstick. Yet by the end, he sluggishly sways and slides like cold oil.

After each of his murders he seems to have the obsessive compulsion to dance. In a way it is a suggestion that his ‘true’ nature, or his ‘inner beauty’ is the murderous Joker, not Arthur Fleck the sad clown who was suppressed and dependent on anti-depressants. It’s quite touching and even beautiful to see Arthur closing his eyes and carry out expressive dance. But do you know who else feels a compulsive need to behave in a ritualistic manner after murder? A serial killer. The entire film made me wonder: how sympathetic did Todd Philips intend us to be towards the man who was once Arthur Fleck, and why should we be so sympathetic to such a character? I don’t think there are any satisfactory answers to be found in the film.

It’s not to say that there is nothing of value that can be found in Joker. As an origins’ story it is not particularly original or memorable but it succeeds a little better when it explores social ills. As well as dealing with mental health issues and how society attempts to address them, there is a strong theme of absentee fathers and the difficulties faced by single mothers. Penny Fleck repeatedly complains about their domestic situation being the result of Arthur’s father not taking responsibility (Arthur’s possible kinship with Thomas Wayne, and therefore Batman, is one of the intriguing subplots left annoyingly unresolved). Arthur seems to blame his emotional turbulence and past traumas on the lack of a fatherly presence in his life. All he wants from Thomas Wayne, he claims, is some warmth: a hug, basic recognition of kinship and community.

Who we are acknowledged and accepted by is a vital part of our emotional growth and passage into adulthood. And notably in Joker, there is no community, only isolated pockets of loners in their small apartments, in the locker rooms where they change into work uniforms. Most seem to try to get on with life as best they can but some, like the young street hooligans and the corporate bullies, make the best of their situation by making everyone else’s lives worse. Yet where there are larger groups of people, community – that sense of individuals sharing space and place together – is still missing.

It’s difficult to ignore the message that the elites care nothing for the poor folk, yet this remains an unoriginal and unsatisfactory declaration. Instead of showing a way to navigate the brokenness of Gotham’s society, Phillips only offers a vision of perpetual dysfunction. Batman’s vigilantism is at least an attempt to address the imbalance, but Phillips discarded that option by focussing purely on Joker.

So what is it that Joker is trying to say? What values is it unconsciously or, perhaps deliberately brain-bathing its audience in?

If I were as cynical as the film, I’d moan that Joker is perfect for the 21st century, lost in its own misery without wishing to understand whether or why it should try to expand outwards. Its values are cramped in the foetal position, with only one eye cracked open to scan the world for danger.

I’m not sure that this film should be given so much praise, considering how much it depends on style rather than substance. Todd Phillips underestimated the pre-existing depth of character needed for a standalone story. Without Batman to serve as a foil, the film ends up emotive but ultimately empty; all we are left with is a broken down man who wanted to be happy. But I think that my reaction is more complex than simply writing it off as a failed experiment. Joker is at the very least a visual and aural triumph that deserves attention and Joaquin Phoenix joins Heath Ledger and Mark Hamill as my favourite avatars of the Clown Prince of Madness. Lastly, the conversations the film has inspired are clear evidence of the power of comic book movies to be as impactful as any arthouse piece.

Jonathan Parreño holds a BA in English from King's College London and since graduating has worked in publishing as a freelance proofreader and desk editor. He loves anything with the themes of true crime, gangsters, noir and cyberpunk, is convinced that video games can be appreciated as highly as any other visual art, and believes that TV peaked with The Wire. Jonny is a Staff Writer for Adamah.