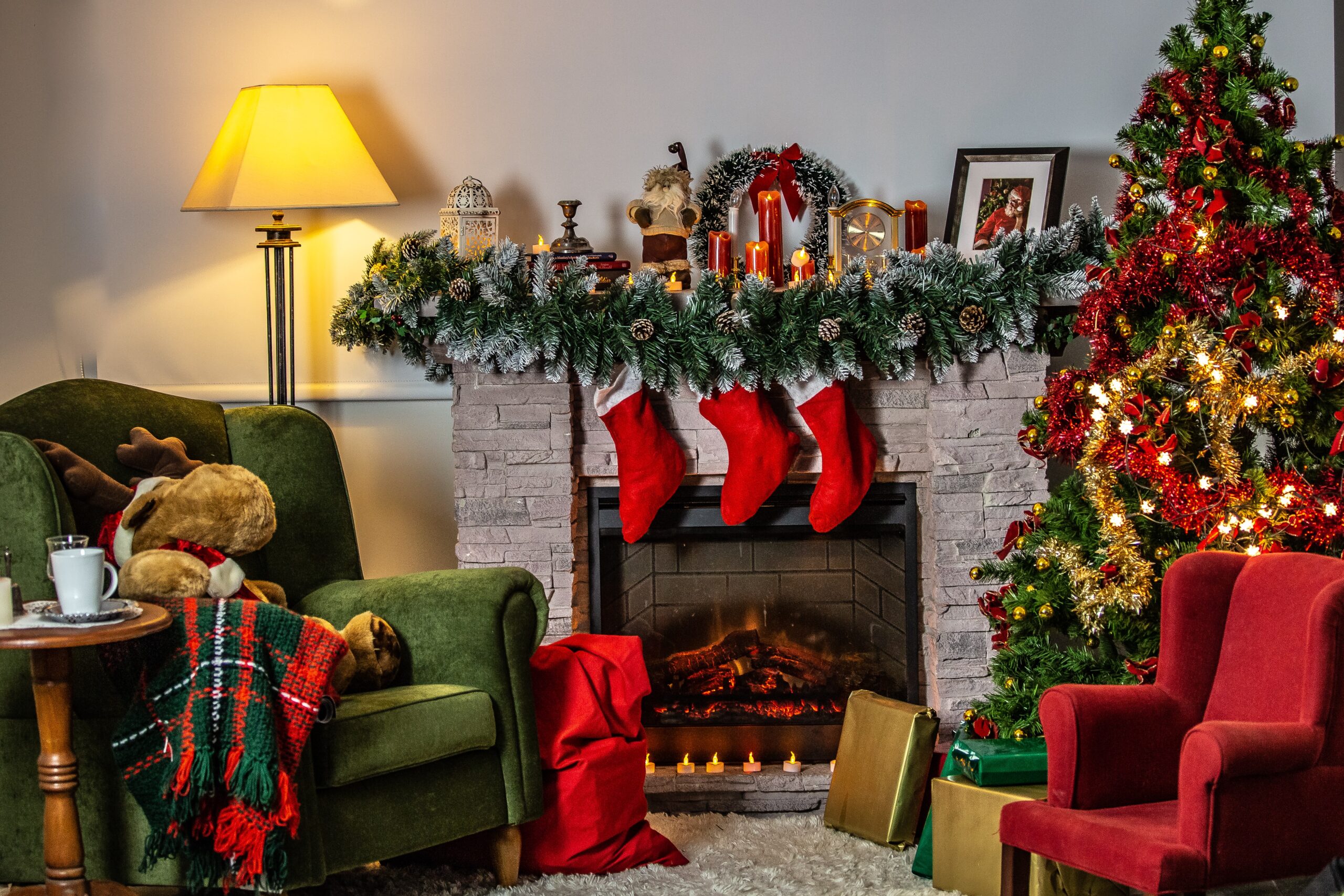 The feast described in carols and schmaltzy TV adverts is a complicated patchwork of cultures constantly evolving, as Adam Brocklehurst reveals.

Maybe it’s the fault of Christmas TV ads or perhaps the designers of Christmas cards ( note for younger readers – quaint custom now in decline) … but whether we ever experienced it or not in person, we seem to share a collective nostalgia for the warm-inside-feeling of a ‘family Christmas’.

As we look back it’s easy to believe that Christmas has remained unaltered since time immemorial, that our customs are sacrosanct, set in stone, an unbroken link between ourselves and past generations. But here too, looks can be deceiving.

When the writer Jan Morris died recently, I was reminded of the unreliability of nostalgia, a theme she explores in her elegant memoir Trieste and the Meaning of Nowhere. Morris argues, as she explores this “half real half imagined… hallucinatory city”, that it is never one thing or another but is a constantly changing stage, with many different actors. Ultimately, nostalgia is an illusion. We use it as a means of gaging the importance of our past, of our memories, we ‘look back fondly’ and imagine ‘how things once were’. What’s important to remember is that nostalgia isn’t necessarily based on truth, it’s based on the idea of truth.

Yuletide 2020 promises to be quite unlike any other. Coronavirus has impacted our lives globally, even with the hope of a vaccination in the near future, and how we celebrate the day is going to be dictated all too largely by the rules and regulations in place in our individual countries and states as part of a concerted effort to protect the vulnerable.

For some, altering our age-old traditions will be a necessary sacrifice, for others it will be a further source of trauma during these difficult times. I will certainly be putting more thought into my own British Christmas this year and suspect I will not be alone in finding it a bittersweet occasion.

Many people the world over will know what a British Christmas looks like, or think they do.

Hollywood movies, literature, documentaries on the royal family and Downton Abbey, have successfully promoted an idealised vision of our small island Christmas across the globe.

Once, centuries ago, Christmas in Britain was a reward. The long penitential days of Advent, with fasting, mandatory church attendance, and other acts of piety, stretched into the early winter. The 12 subsequent riotous days of Christmas, continuing until the feast of the Epiphany, were a much-needed antidote, which lifted the spirits and brought some respite from the harshness of life.

Many of these early Christmastide rituals were decidedly idiosyncratic.

In 1603 John Stow recalled the feudal tradition of ‘the lord of Misrule… maister of merry desports’. Phillip Stubbs informs us that this ‘grand capitaine (of mischeef)’ was selected by lot and would lead a riotous crowd in games, dancing, music and drunken mayhem, demanding alms and money from the rich. Nothing was sacred, and they even on occasion raided churches while the Mass was being celebrated. It might surprise you to know these carousers are probably the distant ancestors of our familiar, upright, decidedly law-abiding carol singers!

Rev Peter Ditchfield in Old English Sports, Pastimes and Customs, reminds us that many traditions of the British Christmas were distinctly pre-Christian in nature, and with their continued practice, in the seemingly innocent guise of seasonal traditions, party games and tricks, we were, in fact, preserving the last traces of the ritual and religion of a pagan world.

One such living relic was the entrance into the home of the ‘yule log’ to be burnt as the family gathered around the fire, to play snapdragon and frighten each other with ghost stories. The antiquary Henry Bourne linked the flaming log to Anglo-Saxon solar worship, the return of the sun and the lengthening of days. The chocolate ganache covered ‘Bûche de Noël’ is all that remains of this ancient custom – less rich in symbolism but rather richer in calories!

In many British homes young couples are still encouraged to kiss beneath the fresh green leaves and plump white berries of Mistletoe, preserving a millennia old Celtic belief that the plant was an aid to fertility, perhaps in the hope that new life might be seeded for the coming year during the joy and merriment of Christmas.

King Henry VIII’s desire for divorce and autonomy, alongside the increasing influence of Martin Luther in Europe, paved the way for the Protestant Reformation. When it reached these shores, many festivals, including Christmas, joined the age-old liturgical practices of the Catholic Church in being considered suspect and popish.

The final nail in the coffin came during the Commonwealth, when Oliver Cromwell and the Puritans branded Christmas sinful and idolatrous, an excuse for gluttony, dancing and frolics, and banned it.

Christmas limped along after the Restoration, never fully recovering its religious significance. By the beginning of the 19th century it had become regarded largely as a secular holiday, beloved of servants and the lower orders, whose ‘Christmas gambols’ were satirised by the likes of Thomas Rowlandson and George Cruickshank.

But all was not lost, and the saviour of Christmas day came in the unlikely form of Britain’s fecund and bourgeois Queen Victoria.

The 1840’s were a time of great political turmoil, revolutions across Europe had cost many monarchs their thrones and the British monarchy, after a series of profligate and immoral Hanoverian kings, was deeply unpopular. Victoria desperately needed something that would unify Britain, something that would be a stabilising force, respectable and relatable, that would unite everyone from the aristocrats in their mansions to the poor in their humble cottages.

She was about to implement a revolutionary standardisation of the holiday and along the way invent a new way of celebrating Christmas.

The new model was to be focused on conspicuous acts of charity and the family, carol singers at the front door, and printed Christmas cards.  What people didn’t realise then, and may be surprised to learn now, is that Victoria’s ‘Great British Christmas’ was in fact a largely German import!

The Christmas tree was introduced into our homes. Queen Victoria’s husband, Prince Albert of Saxe-Coburg and Gotha, brought the tree with him from his native Germany. It was to be bedecked by the entire family, with ornaments, gingerbread, sweets and candles, beneath which carefully chosen presents waited for Christmas morning. This new import was reported on widely in such publications as Cassel’s Magazine and The Graphic, and soon a Christmas tree was de rigueur in the parlour of every home.

The carol Oh Christmas Tree, which became a staple of December concerts across the UK, was simply O Tannenbaum translated, and the perennial British favourite, Silent Night, was in fact composed in 1818 by Franz Xaver Gruber to lyrics by Joseph Mohr in the small town of Oberndorf bei Salzburg, Austria, starting life as Stille Nacht, heilige Nacht.

The dining room was also transformed: it would be the stage for the Christmas spectacle and its table would groan under the weight of a splendid feast. Replacing the traditional stuffed boars’ head or goose would be a fat roast turkey. And frumenty, the ancient and unappealing sounding gruel of fruit, bone-marrow and grains, would be done away in favour of the familiar, blazing, rum-soaked plum pudding.

Under the increasing liberalisation of worship in Britain, Christmas regained some of its long-lost Catholic flavour.

There would once again be midnight Masses, advent wreaths, nativity scenes and religious plays. Christ was firmly returned to Christmas day.

It’s no coincidence that Charles Dickens’ A Christmas Carol was published for the first time at precisely the same time the modern Christmas was being promoted at Buckingham Palace. Arguably his most influential work, it follows the struggles of the Cratchit family and the gradual epiphany of the cruel and miserly Ebenezer Scrooge during an early nineteenth century London Christmas.

And even though Dickens’ work is nostalgic in tone, it prefigures many of the social battles that would begin in earnest in the decades after his death. There are subtle hints at fair working practice, decent wages and the nascent call for national holidays. All changes that would eventually help make the new Christmas a triumphant success for the many not just the few.

In the guise of the ghosts of Christmas past, present and future, the book acts as a warning to those who were threatened by the new order, those who would prefer the status quo. Change – both personal and structural – is a Christmas prerequisite, and for those who refuse, the outcome is made explicitly clear.

Nearly two centuries later, the success of Victoria’s social experiment is still apparent, and Christmas has become the province of governmental intervention and legislation, enacted for the wellbeing of the many during a time of crisis.

Will there be another seismic shift in how we celebrate Christmas post-Covid? Perhaps it’s too early to tell. What we can be certain of is that Christmas has never been a static celebration, and it will continue to change and evolve as the years pass, and perhaps that’s exactly how it should be – sorry about the Christmas cards!