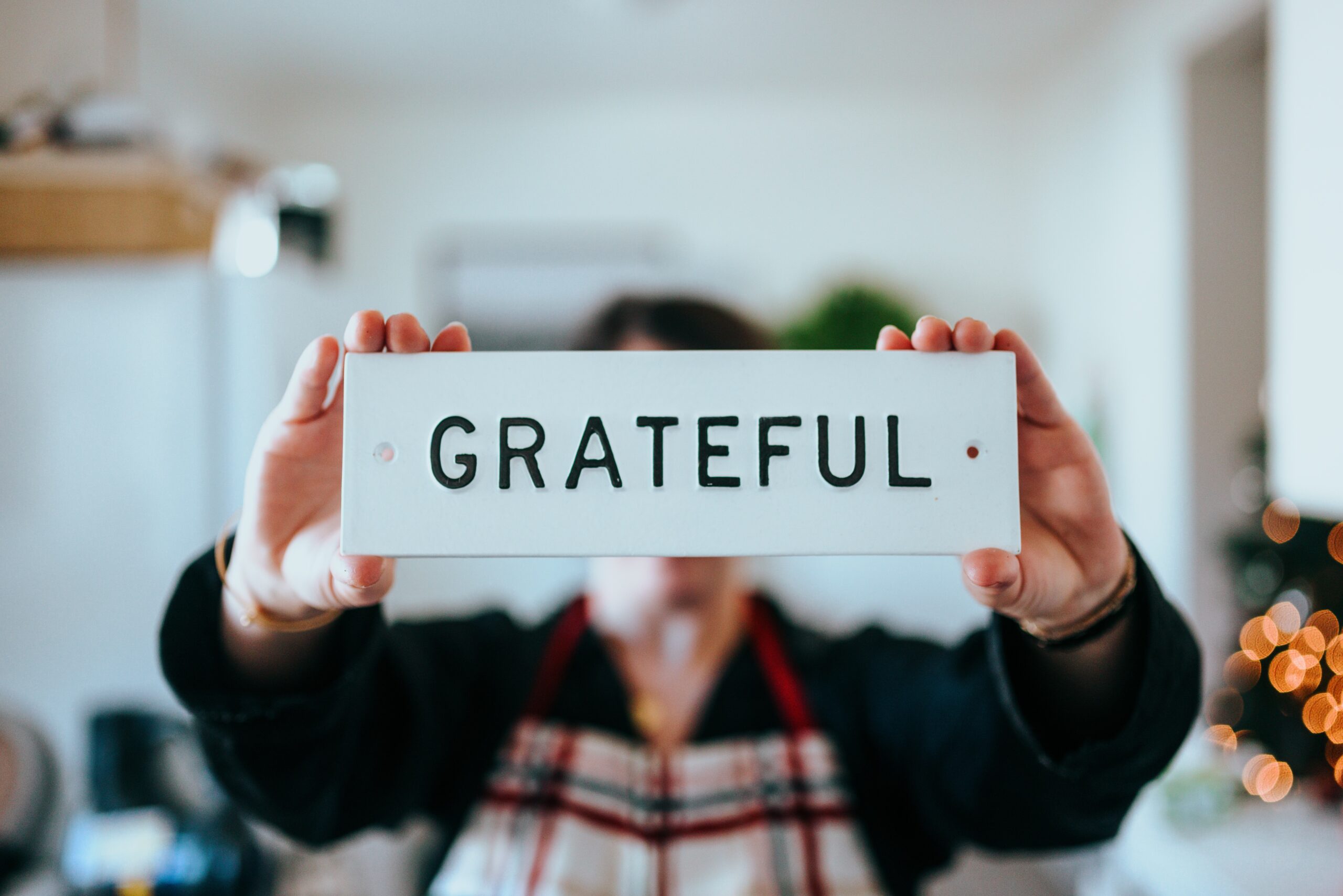 Edward Kendall delves into the growing trend to cultivate gratitude.

Gratitude is a concept that is becoming increasingly popular as a talking-point. Recent years have seen the arrival of gratitude journals and there is a new awareness on- and offline of the topic.

In 2013 a Benedictine monk, Brother David Steindl-Rast, gave a popular TED talk on gratitude, which has received over three million views and 42,000 likes on YouTube alone. During his talk Steindl-Rast hits the nail on the head by pointing out that people are interested in gratitude because they think it will bring them happiness.

He says: “We all know people who have lots of misfortunes that we ourselves would not want to have, and they are deeply happy, they radiate happiness.” Why are they like this? “Because they are grateful,” replies the monk.

So how do we live gratefully?

Steindl-Rast’s reply is disarmingly simple: “By becoming aware that every moment is a ‘given moment’ … It’s a gift. You haven’t earned it or brought it about. And you have no way of ensuring there will be another moment given to you.” He adds, “If you didn’t have this present moment you wouldn’t have any opportunity to do or experience anything.”

“That is what life is about, to enjoy what is given to us,” he says. “When we open our hearts to opportunities, opportunities invite us to do something.”

This opportunity could be an opportunity to grow in a particular virtue, be it patience, love, or generosity. This implies that we need not only be grateful for self-evidently good things such as a promotion for instance, but also for those trying events which provide opportunities for us to grow in virtues such as patience and perseverance.

Because everything is seen as a gift and an opportunity, Steindl-Rast says that grateful people are joyful people and that the more joyful people are, the more we’ll have a joyful world. He says that being grateful not only brings us the benefit of being happy, but also engenders within us a sense of generosity – a desire to share that happiness and that gratitude. He believes that the grateful ‘act out of a sense of enough, not scarcity, so they are willing to share’.

Steindl-Rast’s words reminded me of those penned by the 20th century saint Josemaria Escrivá in his famous book of meditations The Way, in which he gave the following counsel: “Get used to lifting your heart to God, in acts of thanksgiving, many times a day. Because he gives you this and that. Because you have been despised. Because you haven’t what you need or because you have.”

He adds, “Thank him for everything, because everything is good.”

Only someone who sees every day and every moment as an opportunity for growth and self-development can see everything as good, which was certainly the case with Escrivá who gave a homily in 1956 all about making the most of the present moment – the only moment we have in which to grow and take action. This homily was later given the title ‘Time is a Treasure’ when it was anthologised in Friends of God, a collection of his homilies published posthumously in 1977.

Gratitude is also an antidote to the modern neo-Nietzschean idea that we can make ourselves be whatever we want to be without limitation – so that in effect we create our own identities as opposed to having them bestowed upon us.

According to this thinking, if we do not like the existence, identities, and relationships we have, we should change them if it is in our power to do so – and we should precisely nurture that will for power. This thinking can be discovered in issues as diverse as gender theory and euthanasia – attempts to alter our existence, or in the latter case, end it entirely.

Gratitude, however, recognizes limits. It recognises that we have received our existence from others and that we should be grateful and satisfied with this.

It treats existence itself as a good – as something to be grateful for – which stands in stark contrast to Jean Paul Sartre’s existentialist notion that we are thrown into existence without any purpose or meaning. For Sartre existence is ours to make of it what we will, and then when it no longer gives us satisfaction, to end it as we please. Sartre’s mindset is one that often leads people to pursue hedonistic or workaholic lifestyles, trying to find meaning in pleasure or work. Not surprisingly, it has also encouraged more than one person to commit suicide.

Perhaps the most poetic form of this nihilistic philosophy can be found in Edward FitzGerald’s translation of the Rubaiyat of Persian poet Omar Khayyam:

Into this Universe, and Why not knowing,

And out of it, as Wind along the Waste,

I know not Whither, willy-nilly blowing.

These verses were very popular amongst agnostic Victorians and retained their popularity well into the 20th  century. I confess I found them seductive myself, with their fatalism, agnosticism, indifference to a confusing world, and endorsement of epicurean living. Even now I still find the verses enticing and can reel off a few from memory, though ultimately the lifestyle they proffer leaves one unfulfilled – stifling one’s transcendent desires with transitory pleasures.

Given the important place that has been attributed to gratitude within the spiritual life, it has been especially interesting (and pleasing to me) to see the increasing popularity of gratitude as a practice within secular circles. We see this especially with the increasingly popular practice of people keeping gratitude journals in which they write down things for which they are grateful for that day. Furthermore, books on the currently in vogue topic of mindfulness often speak of the importance of gratitude.

Rebecca Frank, writing in A Breath of Fresh Air (2020), observes that the ‘feeling of gratitude is recognised to have a powerful positive impact on our mental and physical wellbeing’ and that ‘we feel more compassionate to others and behave in a more generous way when we practise gratitude’. Gill Hasson, writing about gratitude in her 2019 book on Mindfulness, likewise claims that ‘when you appreciate what is good in your life, you will receive a positive feeling of connection with the world around you’.

Hasson further suggests that every night, perhaps while we’re getting ready for bed, we might ‘identify three good things that have happened during that day’. This means that we will get into the ‘habit of noticing, and reflecting on, the small pleasures – what was good and what went well during the course of that day’.

When we make a point of looking for things to appreciate, she says, it will eventually become second nature and we’ll ‘end each day knowing that good things did happen’.

One of the things which struck me when reading this was how similar it was to the Christian nightly prayer known as the examen. The examen was popularised by St Ignatius of Loyola and the Jesuit order which he founded, though it is a practice by no means exclusive to them. For instance, the daily examination of conscience  is a standard practice in the Christian life and the official night prayer of the Catholic Church, known as Compline, encourages space for the examen in its rubrics.

Jim Manney has written what is probably the most popular book on the examen and its benefits, relating it very closely to the cultivation of gratitude. He says that gratitude ‘isn’t preliminary to the real meat of the examen,’ but rather that ‘the examen instils gratitude’. In other words, we become grateful by paying attention and giving thanks for those moments of joy and opportunity which we encounter in our daily lives – even the most seemingly banal moments such as seeing somebody smile or enjoying a cup of tea. The idea is that every night, before going to bed, we remember those moments and thank God for them.

Similarly, Gerard Hughes, a Jesuit priest and author, in his book God of Surprises advises readers to end their day with what he calls ‘A Review of Consciousness’. This involves letting one’s mind ‘drift over the day, refraining from any self-judgement, whether of approval or disapproval, attending to and relishing only those moments of the day for which you are grateful’.

He adds that those who attempt this exercise are ‘usually surprised at the number and variety of good moments in the day which, had they not deliberately recalled them, would have been quickly forgotten, obscured, perhaps, by any painful experience in the day’.

What differentiates Jim Manney and Gerard Hughes from the likes of Hasson is that they bring God into the equation. Being grateful implies having someone to whom one is grateful – the one who bestows the gifts for which we give thanks – and for many people, like Hughes, this is God.

However, this is not to say that non-religious people shouldn’t cultivate and express gratitude, which is why we have seen the rise of gratitude journaling amongst people of all faiths and none. But for the religious, there is no excuse not to be grateful – and it would be rude not to say thanks.