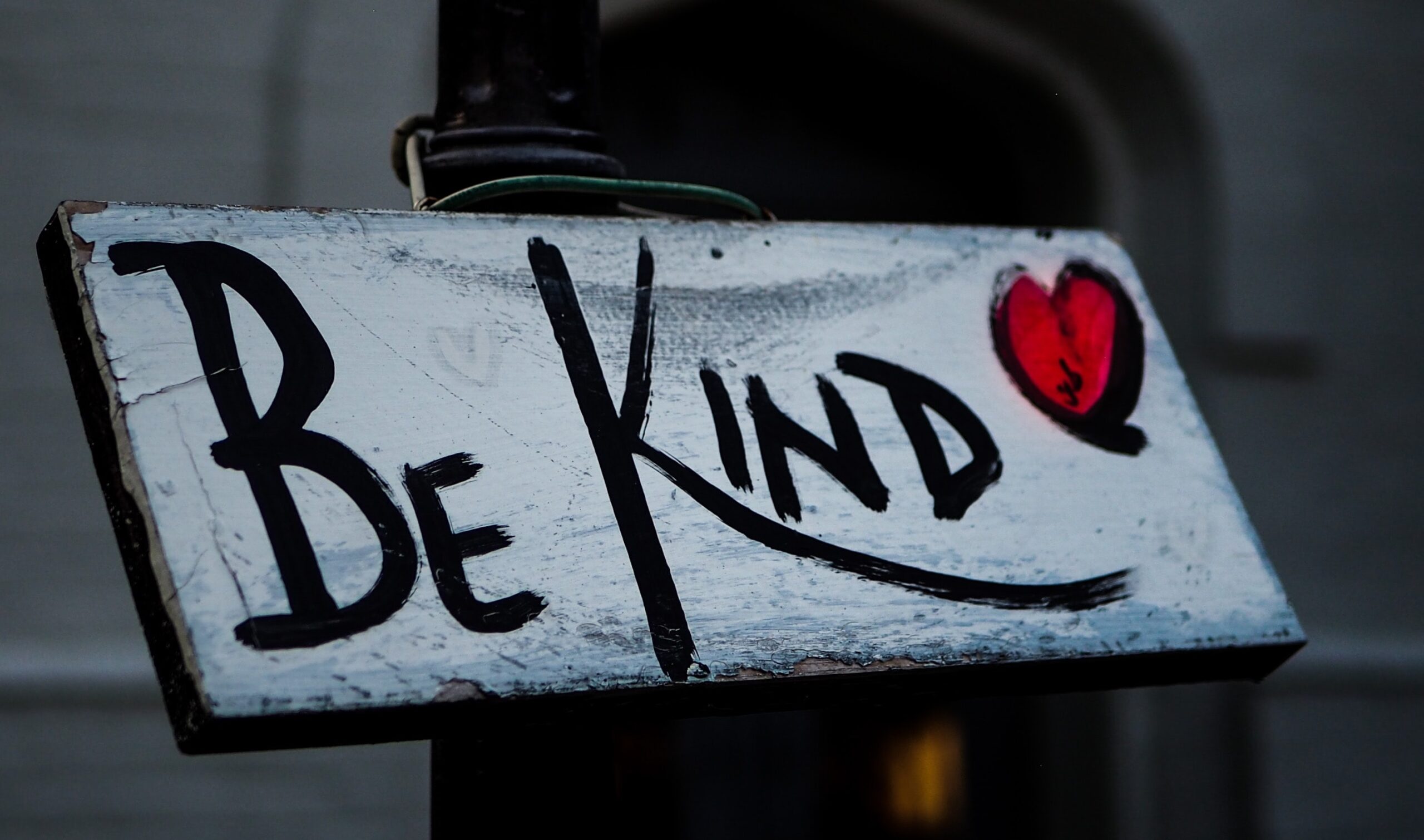 Kindness is one of those words that has somewhat fallen out of usage in recent years. Solidarity sounds more energetic. Altruism sounds more intellectual. Generosity, perhaps more natural.  Yet none of these alternatives can match the richness of genuine kindness.

To be fair, the ‘Be Kind’ Campaign did spearhead an international campaign for World Kindness Day in 2017 when people took part in making and displaying ‘be kind’ signs to spark acts of kindness and spread positivity. The hashtag #BeKind was created back in 2017 by Lucy Alexander, a mother who lost her son to suicide and wanted to raise awareness about the horrific impact of online trolling.

Recently the ‘Kindness Test’ ended its period of inviting the public to participate in an unusual research project.  It was led by a team of researchers in the Sussex Kindness Research network, based at the University of Sussex in southern England, in partnership with BBC Radio 4.

The aim is to learn more about how people’s attitudes and experiences of kindness might relate to health, well-being, and other social and psychological conditions. The experiment – one of the biggest of its kind – ran from August to October this year.

I remember the day it was announced on the BBC Radio 4 Today programme. I was struck by even the perceived need for such research but also by what the hoped and planned for results might instigate in 2022.

I decided to complete the online questionnaire for two reasons: first, to be able to speak about the results once they are published having had direct experience of participating, and second because I wanted to seize upon it as an opportunity to express my firm conviction that sincere religious belief and practice has a bearing on how seriously one takes the virtue of kindness.

For Christians kindness is a fruit of the Spirit. But more on that later.

As Christmas and the season of good will beckons, I sincerely hope it triggers a bigger, more widespread conversation, well outside academia, about what kindness really means.

Some of the questions posed by  the study were really interesting, and deserve a bit of self-examination:

The analysis of the submissions is now being conducted and the results which will be published, no doubt with some fanfare, by the BBC and the University of Sussex in February 2022 will be worthy of attention.

Ironically it was the same university which saw Professor of Philosophy Kathleen Stock effectively hounded out of her job after a barrage of relentless intimidation and hate-filled conduct from activists on campus accusing her of transphobia because of her legitimate gender critical views. To be fair the university authorities defended both her right to exercise academic freedom and expressed regret at her decision to quit her tenure so as to avoid further attack. But many understood her decision, which was taken in order to protect herself and her family.

As the UK Government Minister for Higher and further education Michelle Donelan said: “It is absolutely appalling that the toxic environment at the University of Sussex has made it untenable for Professor Kathleen Stock to continue in her position there. No academic should ever have to fear for their personal safety.”

It’s not just the cancel culture nor even the aggressive nature and tactics of so many in the transgender rights movement and others which is a cause for concern though. It’s what lies beneath the nastiness that is alarming.

Perhaps like a slowly descending fog this distinct lack of basic kindness, common courtesy and politeness – the hallmarks of a civilised society – has simply crept up on us over decades and it’s only now with the advent of social media that it has reared its very ugly and sometimes deeply disturbing head.

As the author JK Rowling put it following her tweets on the need for women-only spaces, she has ‘had enough death threats to paper [her] home’.

So what’s going on? What kind of distinctly unkind mindset is at work in such scenarios? Sarah Phillimore at The Critic magazine defined some of this behaviour very well in her recent article about the infamous GP,  Dr Adrian Harrop, who has been suspended by the General Medical Council for his online treatment of others. Is it just plain nastiness or could it be what’s called the ‘disinhibition effect’ of so many online exchanges?

This is now a ubiquitous trait of online communication whereby many people self-disclose or proclaim their views more frequently or intensely than they would in person. It’s partly because they hide behind anonymous accounts and so feel free to be as abusive as they like without recrimination, though some who are clearly identifiable seem to care little about any repercussions resulting from the invective they employ.

According to a paper published way back in 2004 by John Suler of Rider University  “Cyberpsychology & behavior: the impact of the Internet, multimedia and virtual reality on behavior and society,” there are six factors that interact with each other in creating this online disinhibition effect. They are quite a mouthful in and of themselves – dissociative anonymity, invisibility, asynchronicity, solipsistic introjection, dissociative imagination, and minimization of authority. If you want to find out exactly what these terms mean you can find the full paper here.

Basically, Suler notes there’s a type of schizophrenia happening online. The unkind, decidedly nasty and vindictive online persona that many inhabit and the much more reasonable, polite and mild-mannered character we all aspire to be every day during the in-person encounter somehow co-exist in the same individual.

I guess there’s a Jekyll and Hyde beneath the surface of everyone to some degree, in that we can all be tempted to lose patience and even vent our anger from time to time. However, virtual life on the digital continent, especially the social media landscape, appears to bring out the worst in certain people and so all the more reason to reflect on what true kindness is and how we ought to express it.

My own work providing educational resources on character and virtue formation focuses a good deal of attention on helping young people understand the importance of knowing how to behave well in the online world. And we know it makes a difference based on the feedback we receive from teachers. “For lots of the children,” wrote one high school teacher, “it’s the only time they actually contribute  … In fact one of our ‘troubled’ learners told our Head of Year that the Fertile Heart lesson was the only class he enjoyed.”

Kindness – when it is properly understood – is not such an outdated word. It goes deeper than just feeling nice about doing something nice for someone. St. Paul writes in his letter to the Ephesians to ‘get rid of all bitterness, rage and anger, brawling and slander, along with every form of malice’.

It’s a universal exhortation which I am sure most people can sign up for and aspire to. But for the disciple of the one who called himself the Prince of Peace, the exhortation makes a further demand in the very next verse: “Be kind and compassionate to one another, forgiving one another, just as in Christ God forgave you.”

In other words, if and when we hurt another with our mode of expression and actions, then asking for forgiveness and bestowing forgiveness is the only real way of learning from mistakes and moving on to better, healthier ways of relating and communicating.

In a climate which is increasingly hostile to freedom of thought and speech this kind of reciprocity may be the only way to be the leaven in the all-pervading cancel culture. The other practical response is to withdraw from social media entirely for extended periods of time, not just for a few hours but for several days, to preserve one’s sanity perhaps but most importantly … in order to be kind to oneself.

Edmund Adamus is Education Consultant to “A Fertile Heart; Giving and Receiving Creative Love” www.fertileheart.org.uk a relationships and sexuality formation program for ages 5- 16.

Our competition is still running! Know any keen young writers? Click here to read more about the fantastic opportunity we have for them!