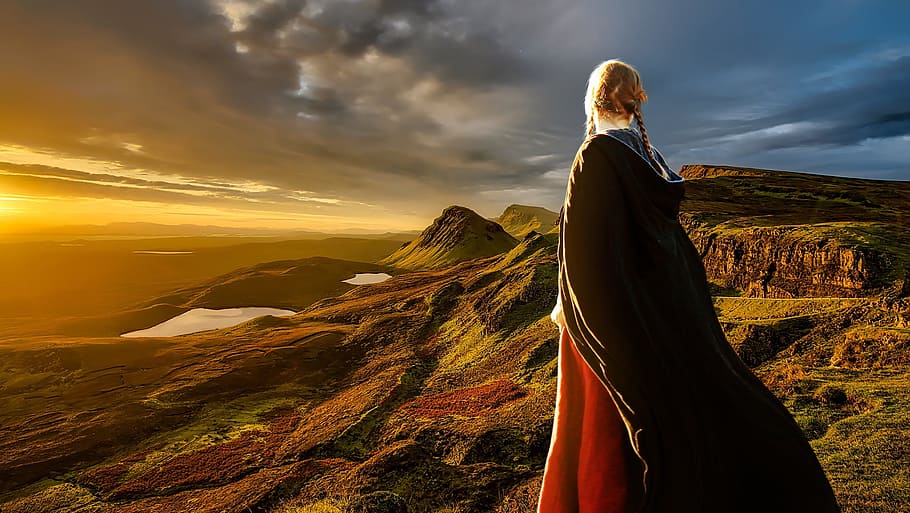 Jasmine Jones reveals that the Middle Ages were not as dark as is often claimed and finds that women played a surprisingly powerful role in society.

It’s not surprising that, given the name commonly imposed on this period, there are so many “black” legends about the so-called “Dark” Ages. People begin with a prejudice against this era and how ever you try to defend it, it seems you can’t win.

The Middle Ages (which at best are seen as that: in the middle, a passage-way towards something better) evoke an epoch of backwardness and superstition. Didn’t it rain persistently in medieval times? Wasn’t quality of life nearly non-existent?

Certainly, many aspects of popular life were problematic in this period, particularly when compared to our modern standards. For example, the tremendous technological advances in healthcare which are supporting society during this current pandemic were painfully lacking during the fourteenth-century Plague. However, the general public often accepts stereotypes at face value, including their frequent oversimplification of the truth for the sake of enhancing dramatic appeal, and this is very much the case with this age.

The Middle Ages are often distorted as a dire dystopian dungeon in which humanity was terminally trapped until its revitalising release by the Renaissance era. This is a sweeping generalisation which overlooks the fact that the pre-Reformation period poured forth extensive learning, discovery and cultural vibrancy.

The truth that medieval Europe endured great hardships from what we now consider its “primitive” resources and infrastructures is undeniable. However, even these should not be chortled at condescendingly from our twenty-first century “new and improved” viewpoint, and it should not be arrogantly asserted that “we are so much smarter now than they were back then.”

The Early Middle Ages sowed the seeds which subsequent generations have continued to cultivate up to this present moment. We owe what we have now to what was built for us then. Christianity’s arrival to English shores, for example, in the late sixth century catalysed the country’s edification: monasteries were established as epicentres of learning, and the mobility of missionaries connected the country closely to mainland Europe, instituting networks for the trade of material goods and for the immaterial exchange of ideas. This was a time teeming with newness of life, structuring the society which continues to live and breathe today.

And what about the individual inhabitants of this thriving time? Again, it seems almost a truism to dismiss the Middle Ages as dismal and degenerate. However, this period is much more profound than is often presumed. Our contemporary eyes tend to look with the lenses of “rights” and “equality”, meaning that the treatment of medieval women is often anachronistically branded with the blanket description “misogynistic.” Whilst it is accurate that life as a medieval woman was exceptionally challenging, when appreciated in its historical context it is evident that the reality of female life was more nuanced than is widely understood.

It is little known, for instance, that women’s legal rights in the ninth century, under the reign of King Alfred the Great, were far more substantial than centuries later in Victorian England. King Alfred’s Domboc – the book of his law codes – dealt with crimes against women with as much seriousness as crimes against men, listing the penalties that a range of offences would warrant. Female autonomy was legally protected. No woman could be forced to marry a man she disliked. No woman could be sold for money. A daughter could inherit land and property from either parent, and she could hold these in her own name. She could also sell these possessions without seeking consent from her father or husband.

The traits of determination and independence with which these Anglo-Saxon lawcodes equipped women are particularly evident in the specific lives of two individuals from the first half-millennium or so of Christian England. These lives were far from “voiceless” and “repressed by the patriarchy.”

Hilda of Whitby (614-680) exhibits authority and valiance, even through the etymology of her name, which stems from the Old English hild, meaning ‘battle.’ As a princess of the royal family from Deira (a Northern English kingdom), she grew up in the pagan royal court of King Edwin but, by the age of 13, she had become one of the first converts to Christianity in the north of England, and she helped construct a church in which King Edwin could be baptised on Easter Sunday of 627.

Hilda remained at court for 33 years before becoming a nun. The modern-day mindset often fails to appreciate not only the beauty of a vocation to religious life, but also the freedom with which such a vocation bestows its recipient. Contemporary critics often deplore medieval women for “shutting themselves away” into a “sub-human existence” as nuns or anchoresses. These latter are particularly shocking to the modern mindframe: anchoresses were women who chose to be enclosed in a cell attached to a church, in order to devote themselves to a lifetime of prayer. On her entry, the door would be permanently cemented over and consecration prayers similar to funeral rites would be recited as the woman “died” to her worldly existence.

A person of today may take for granted that these ways of life are much less self-fulfilling than marriage and child-bearing (even though these too are now often perceived as similarly restricting options) or the easy-come, easy-go freedom from commitment which is so exalted in our time.

However, it is rarely understood that monastic life promised plentiful opportunities for medieval women to develop themselves and acquire intellectual independence, as well as deeper union with God. Freedom from the male-dominated court enabled the female religious to become educated in reading, writing and crafts, to dwell serenely within the security of her own space in a convent or cell, and to contribute generously to the life of the Church.

Hilda’s royal roots secured her the land and resources with which she established a double monastery at Whitby, that is, a large institution wherein a separate community of nuns and monks were combined. Hilda thus had organisational responsibility for not only the women, but also for a large number of men.

This site would have been strikingly significant: it overlooked the sea and was abundant in wealth. Archaeological finds have included luxurious items such as a comb made of bone, hairpins and pieces of glass from Anglia. Further accentuating the authority of its foundress was the decision to host the Synod of Whitby at Hilda’s monastery in 664: an important event which would have united bishops and ecclesiastical representatives from all over the country to make crucial choices about the future of the English Church.

Also testifying to the admirable and understated agency of medieval women is Christina of Markyate (c.1096-1155). Whereas our highly sexualised modern-day convention tends to stigmatise virginity as a degrading diagnosis of female deficiency, the absorption of Christianity to the societal fabric of the Middle Ages meant that the chastity of both men and women was glorified as their means of identification with the majesty of Jesus Christ and the queenship of the Blessed Virgin Mary.

It is therefore more accurate to value Christina’s virginity as the instrument of her empowerment, rather than regarding it as a symptom of her self-repression. Christina’s virginity was a vehicle for her awesome affinity with the divine: it endowed her with a sense of the Lord’s presence so vivid that she prayed loudly, clearly and conversationally throughout the night, preventing her whole household from being able to sleep!

A medieval text praises the “invincible prudence” with which Christina’s purity instilled her: this virtue enabled Christina to avoid consummating the marriage into which she was eventually forced by her parents. She was impeccably resistant to the material riches and threats of violent punishments with which her family tried tempting her. Christina was anything but silent, and she epitomised a woman of steely self-defence as she vocally rebuked society’s distrust of her. When she was suspected of rejecting Burthred (her proposed husband-to-be) in order to enter a more wealthy marriage in the future she retorted, “A more wealthy one, certainly […] [f]or who is richer than Christ?” and when Burthred threatened to kill any man to whom Christina should wed herself she warned, “Beware then of taking yourself to the spouse of Christ, lest in His anger He will slay you.”

And Christina was physically as well as spiritually strong: she hid from her husband by climbing up to the ceiling of their bedroom and leapt over the fences in which her mother and father had hoped to ensnare her. Similar to the institutional authority of Hilda, Christina’s agency was affirmed by her appointment as prioress of St Albans Abbey. Here she led a community of nuns, maintained their convent and continued as a wise counsellor to many, including men.

Hilda and Christina, then, whilst not representing the entirety of the female population, at least add greater nuance to our common conception of medieval women. It is due to the presence and participation of such wonderful women in Anglo-Saxon and later-medieval society that our understanding of the so-called “Dark” Ages is enlightened.

From this early period of England’s history – often through the actions of intelligent, independent and insightful women – originated the hardiness, holiness and hope on which subsequent societies would build themselves. Examples of similarly great women could also be given from other medieval European countries – St Catherine of Siena from fourteenth-century Italy to name but one. The darknesses of our own current age could surely benefit from illumination by the inspirational women of periods past who could encourage modern-day women and men to strive more consistently for the strength, perseverance and faithfulness they exemplify.