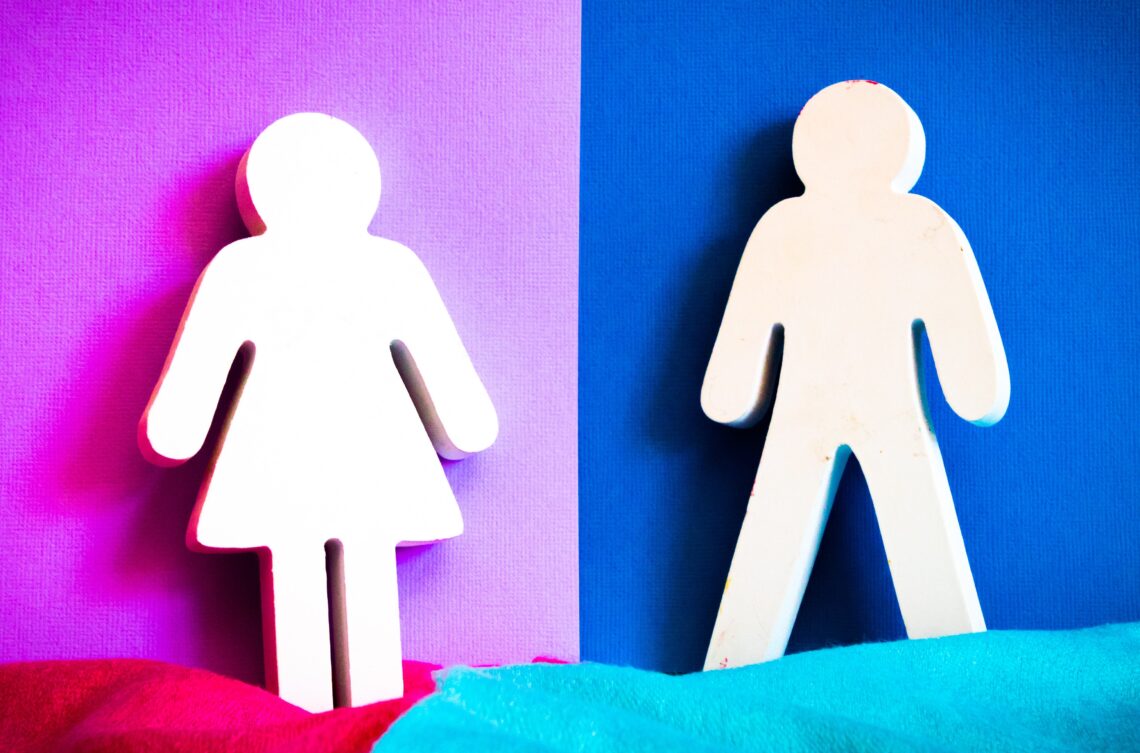 Sam Hall points out the inadequacies – and indeed absurdities –  of recent debates about what it is to be male or female.

Gender equality is a concept which few would dispute. Men and women have – or should have – equal rights and protections in law and custom. So far so good …

Amidst challenges to binary gender realities, I believe it’s important to assert that gender still matters because everyone can face disadvantages by virtue of their gender and -whether campaigners like it or not – binary gender definition is the truth for the majority.

In recent years many voices have been raised which tell us that gender is a social construct and that we can identify however we choose. For most people today, this is only true to the extent that men can bake, arrange flowers, and wear pink shirts without these choices being considered an annulment of their masculinity, and women can join the armed forces, be the breadwinner, and play rugby without compromising their femininity.

In both cases each gender adopts what was considered stereotypical for the other – yet both remain comfortably within the traditional understanding of binary gender. Neither men nor women are defined by their hobbies, career, dress sense or their biology. However, gender along with many other factors continues to affect how we relate to society.

Recently a 52 year-old woman named Dr Mott broke down alone, in the growing darkness, and the breakdown rescue service, the AA, told her that solo women were now treated exactly the same as solo men. Understandably upset, and feeling vulnerable, she reached out to the company on Twitter, who doubled down on their position. When they were criticised by women’s safety campaigners, the company was later forced to clarify that whilst in practice they do prioritise women, the law says they can’t!

This level playing field did Dr Mott no favours – in fact the outcome could have been more sinister.

While it is true that both men and women are victims of serious sexual and physical violence – think of Reynhard Sinaga and his hundreds of (male) victims – evidence clearly shows that men are more likely to be the perpetrators as more than 90 per cent of the killers for both genders are male.

Alas, key facts seem to be up for debate when gender is ignored. A lone female is more vulnerable than a lone male. There is little doubt about it. There have been more than 2000 female murders in the past 10 years in England and Wales. How can we even begin to address this, if there is debate about what a woman is and whether being a woman makes a difference to a person’s experiences in society?

We can’t ignore gender because it affects who’s more likely to kill or be killed!

Women have been able to participate in P Company – the gruelling training and testing regime necessary to join the British Army’s elite Parachute Regiment – since the 1990s. But it took until 2020 for a woman to complete it successfully.

In a genderless world, Capt Rosie Wild would not be a trailblazing female soldier but a just another recruit passing P Company.

Similarly, the BRIT awards are going gender-neutral. Great news if you like a shorter awards ceremony; bad news if you want to celebrate the achievements of female artists and inspire the next generation of young women.

The field will get more competitive with fewer awards and accordingly less chance for female (and male) actors to pick up one of them. Fine if more women than men win an award. Not such a good look if it’s the other way around.

Brighton and Sussex University Hospitals NHS Trust have also joined the brave new world of genderless language by issuing new vocabulary guidelines telling women they can no longer breastfeed but ‘breast/chestfeed’ with human milk or breast/chestmilk, tapping into their perinatal instincts.

This – besides sounding patently absurd to the vast majority of service users – is an erosion of women from society because it denigrates a very feminine biological characteristic to the status of a functional genderless activity like eating. Having the capacity to conceive, give birth and breastfeed a baby with breastmilk, tapping into your maternal instincts, is not the only thing that defines a woman. But men can’t do any of these things.

No wonder that many women have decided it’s time to put the feminine back in feminism.

A well-meaning but misguided approach to gender equality that ignores what makes us different will surely fail – just as an approach to a post-racial society which ignores race would come to nothing.

I know many people will not agree with me. Gender issues and the language we use is one of the hottest of contemporary hot topics. From J. K. Rowling’s famous (or infamous) musings on Twitter to Germaine Greer who stated that transgender women are ‘not women’, this topic cuts to the heart of who we are because gender remains important to our identity and to society’s understanding of itself and the common good.

Transgender people know this better than anyone – a person who ‘transitions’ adopts the characteristics of the opposite gender. It is a demanding and lengthy process. Just ‘identifying’ as a man or woman is not enough.

Still, some will say that Greer or Rowling are not just wrong but actively transphobic – demonstrating fear or hatred of the transgender community. However, this is to misunderstand what tolerance entails.

We are called, in the biblical words, to ‘love our neighbour as ourselves’. This is true tolerance and compassion, entailing acceptance of everyone and respecting each human being as a person worthy of respect and protection in law, but this does not mean agreeing with or endorsing every decision they make. Indeed, sometimes love requires telling someone you think they are mistaken.

A recent example helps clarify the issue for me. A Christian-owned bakery refused to make a cake for a gay man which endorsed gay marriage. President of the Supreme Court Lady Hale pointed out that ‘their objection was to the message on the cake, not to the personal characteristics of Mr Lee’. Exactly!

The bakery would have served Mr Lee irrespective of his sexuality but was not willing to co-operate with the campaign ‘support gay marriage’ by putting it on a cake they were asked to make and sell.

In a similar way, it’s not transphobic to say you think gender is binary (though with a wide spectrum of who men and women are and how they choose to live their lives). Real transphobia would be denying someone a job or a mortgage solely because they are transgender.

We cannot and should not change the meaning of words to shut down discussion about how being a man or a woman changes your experience within society.

Changing the meaning of words may seem a campaigning victory, but it does not help with the issues at stake because, however much we play with words, gender is still very real, very much binary and affects how we live in the world.

Society acknowledges this sporadically and bizarrely. Women are equal to men – until they’re left alone in a broken-down car at the side of the road. Men are equal to women – until they enter the abortion debate. There is no easy solution to the gendered problems facing the world – but any solution which ignores or tries to deny the reality of gender will fail.

Chromosomes and reproductive organs do not make the totality of man or woman. But they are the starting point and make real differences both in terms of biology and in how we  experience society. Anyone who takes the feminine out of the feminine cannot hope to begin to solve issues of equality of opportunity for both genders. Acknowledging and tolerating our differences in body, thought, and deed is the first of many steps towards a truly equal and diverse world.

Sam Hall recently graduated with a 2:1 degree in History and International Politics from Aberystwyth University in West Wales where amongst other things, he was involved with Conservative politics, the university's CathSoc and the Clay Pigeon Shooting Club. He was received into the Catholic Church in his final year at Aberystwyth and continues to live and look for work in the town. He has previously stood unsuccessfully for roles ranging from Councillor to Student's Union President. Currently, he is out of work, but most recently worked for NHS Test and Trace. In his spare time, he likes to bake, garden, and do clay pigeon shooting.