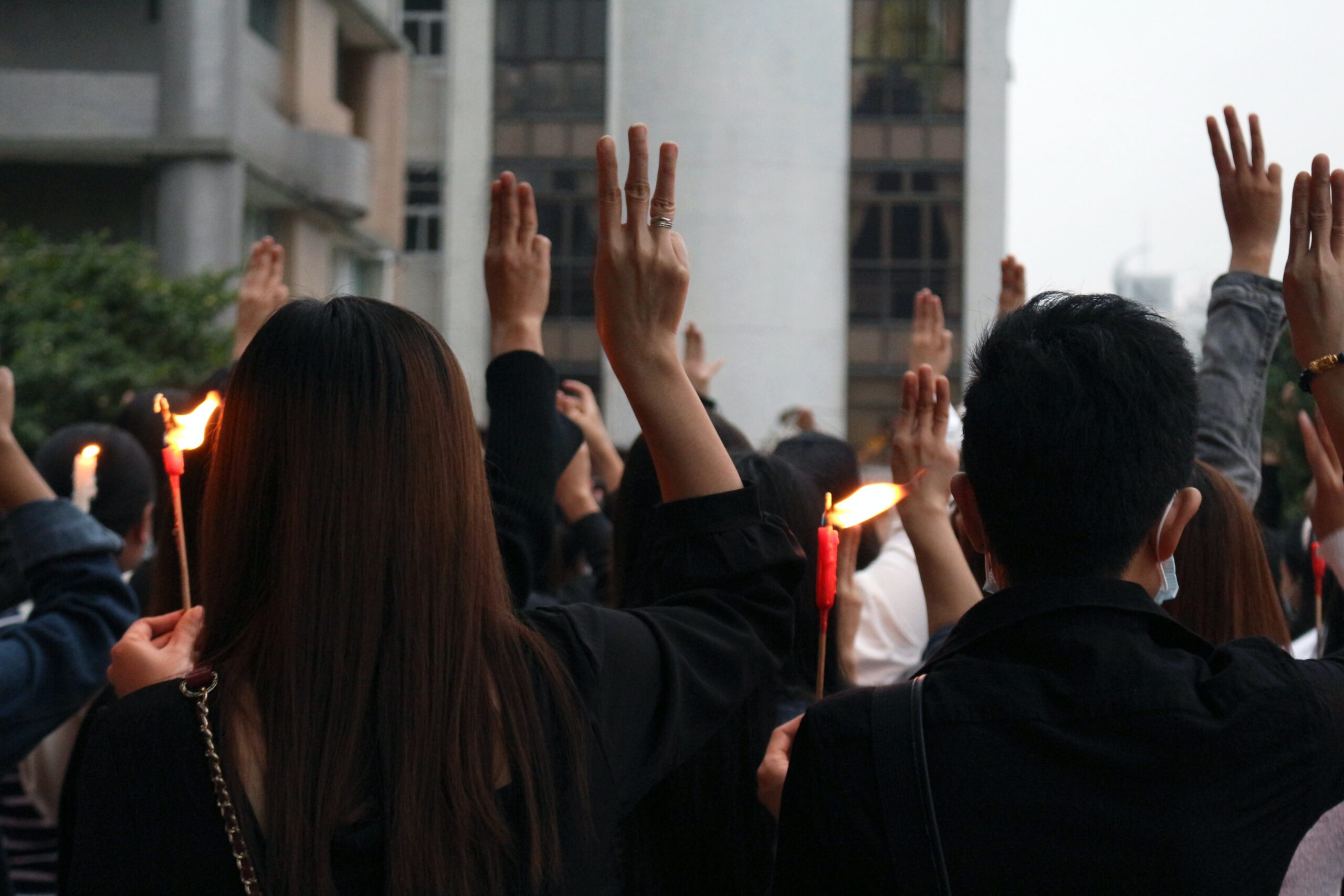 As demonstrations continue against the military take-over, Han Myo Win looks back to explain what is happening and why in Myanmar today.

Visitors to the Korean War Veterans Memorial in Washington DC are often struck by a phrase carved into the monument: “Freedom is not free”.  It’s a short but powerful reminder that democracy should never be taken for granted. On the early morning of 1 February 2021, the people of Myanmar were forced to confront this reality in a shocking way.

That morning the population of the country formerly known as Burma awoke to the shocking news that Myanmar state councillor (and Nobel Prize laureate) Daw Aung San Suu Kyi and President U Win Myint had been arrested. A military coup d’état had taken place.

All phone lines were cut off followed by an internet black out.

It soon dawned on us that we were back in the dark days of midnight raids by the secret police, when discussion of politics and even the use of the word politics meant lengthy jail sentences, days of cronyism, rampant corruption and isolation from the world.

How could this happen and how could the military amass such power and influence?

To explain this, we need to go back several decades – to 1945, in fact –  to the tail end of World War Two when the country was a battlefield between the British and Japanese armies.

When the smoke cleared, the country was devastated but awash with weapons. The persistent hostility between different ethnic groups propagated by the divide and rule legacy of British colonialism, as well as the threat of communism being imposed from China, meant the country was deeply unstable.

After gaining independence from the British in 1948, the newly-installed democratic government inherited the task of rebuilding the devastated economy and infrastructure in addition to the daunting challenge of uniting a country of over 135 ethnicities, many armed to the teeth and threatening to break away.

This weakened the civilian government but strengthened the army which started to undermine the civilian institutions. The government was unable to quell numerous uprisings by armed ethnic groups and, with the country on the verge of disintegration, the military eventually ousted it in 1958.

With authoritarian rule, the junta partially restored stability, driving the ethnic armed forces into the jungles, but they were ultimately unable to defeat or disarm the armed groups, or achieve meaningful peace.

The ethnic groups continued to wage a kind of  guerrilla war which is still continuing after seven decades and has become one of the longest running civil wars in the world.

As the military is (by definition) a security-focused organisation, the country was governed likewise. The economy was grossly abused and mismanaged via a system of patronage, giving rise to cronyism which resulted in rampant corruption and the concentration of wealth and power in the hands of the ruling military elites and their associates .

The military established huge private enterprises monopolising the key sectors of the economy, with boards of directors all under the control of ruling generals who enjoy great wealth and influence. In addition, many of those enterprises are exempt from taxes or public scrutiny. The army had become a state within a state.

For decades, the people of Myanmar witnessed a series of uprisings which were ruthlessly crushed. With the country slowly deteriorating in all aspects, the military relieved the pressure by handing some power back to a civilian government. A multiparty ‘democratic’ constitution was adopted and elections were held in 2011.

The constitution, which was written by the military, relinquished limited power to the civilian government but ensured that the generals still retained control in all branches of governance, not to mention total control of all the armed security apparatus. For example, the army held 25% of the parliamentary seats (at least 75% is needed to amend the constitution), six of the nine cabinet seats, the defence budget is exempted from the auditor general’s scrutiny, and the army is independent from civilian authority  – all of which are fatal violations of democratic principles.

The commander-in-chief of the armed forces is effectively more powerful than the President of the democratically elected government.

Despite these glaring flaws in the constitution, democratic elements including the NLD (the National League for Democracy party headed by Aung San Suu Kyi) decided to participate in the elections seeking to gradually curb the military’s influence within the political framework. The NLD  won a landslide victory in 2015, winning over 75% of the contested seats and subsequently won over 80% in the 2020 elections, in contrast to the army-backed USDP party which received less than 8% in 2015 and less than 5% in the 2020 general elections.

The serving commander-in-chief was nearing retirement in June 2021 with aspirations to be the President through an alliance with the USDP, but the latest crashing electoral defeat was a shock to them.

Subsequently, the army and the USDP claimed election fraud without much evidence (despite the fact that international observers affirmed the elections to be relatively free and fair). Under this pretence, on the day of the assembly of the new parliament, the army declared a state of emergency and arrested almost all the NLD ministers and other key MPs including Aung San Su Kyi and President Win Myint.

The military tried to justify the coup by stating that election fraud had undermined democracy and insisted they would hold another election without stating the timeframe.

The promise of holding new elections was made at the time of the 1988 uprising and it took another 23 years for the elections finally to be held in 2011.

Once bitten twice shy, as the old saying goes: people are not convinced by such assurances. For most of the country the coup was a simple might is right power grab by the people with arms from those without arms.

The initial response from the public was one of stunned silence but by day three there were peaceful marches on the streets, the emergence of a civil disobedience movement (CDM) among civil servants, and the establishment of a parallel government known as the CRPH (Committee Representing Pyihtaungsu Hltuaw) by the surviving parliamentarians.

The CDM in particular has crippled the military’s ability to govern, and nationwide peaceful marches by millions of citizens have kept the momentum going and exposed the myth of military legitimacy (no country has yet recognised the military government).

The military crackdown was restrained at first (partly due to live streams by protestors streaming every incident of suppression) but has turned increasingly violent through the use of live bullets, indiscriminate arrests and the release of dangerous criminals from prisons who are now terrorising the populace. Agents provocateurs, midnight raids and internet blackouts are also used as weapons of suppression.

The people of Myanmar view this coup as an existential threat and are fighting against it as though life itself depended on it.

The people have tasted democracy and enjoy its flavour.  No military crackdown can put the genie back in the bottle.

Despite the outward appearance of NLD flags in the protests, this is not a battle between the NLD and the military, nor the people against the military, but rather a struggle between democracy and dictatorship.

For Myanmar, the democratic journey is far from finished. The army hegemony in politics and the economy must be curbed, the military must be subordinate to civilian government through constitutional amendments, and a comprehensive peace with ethnic armed forces must be achieved through the creation of a genuine federal democratic union and the strengthening of civil society and its institutions.

Freedom is not free … that phrase carved in an American war memorial 70 years ago is as relevant as ever to the struggle taking place in 2021 for the soul of a different Asian nation. The people of Myanmar are experiencing the painful truth of this adage every day of their lives and need all the international support they can get if they are to achieve a brighter future. The dramatic contrast we see between the two Koreas, North and South – one groaning under a self-serving tyranny and the other now thriving – point out the possible paths Myanmar could take. The choice could not be more stark.

Han Myo Win is an entrepreneur based in Yangon. He graduated with a Masters degree in Electronic and Electrical Engineering from University College London and is an alumnus of Netherhall House. Outside of work, he can be seen with a badminton racket or fiddling with his telescope.