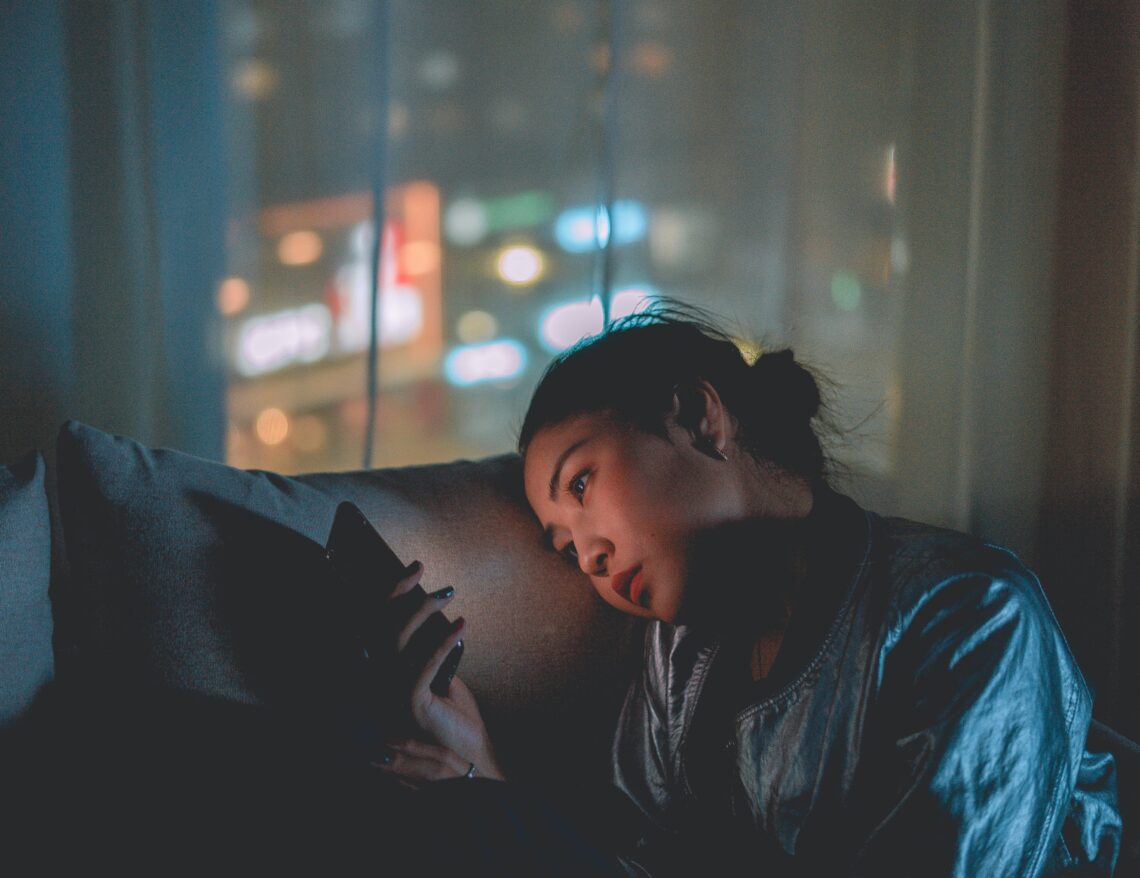 Zuzana Revayova is concerned about the effects of social media on young people’s mental health.

Can you remember when social media first took over your life? In other words, how old were you when you got your first Facebook profile, Instagram, TikTok or Snapchat?

If you’re Gen Z or younger, you probably remember signing up to a social media platform at a very young age, as soon as you got access to a computer or your own smartphone. Making a profile, creating an online persona, following your favourite celebrities. It was like a rite of passage.

But did you know what you were signing up for? Can children fully understand the consequences of being on social media and how it impacts their development, mental health and relationships?

The case of Molly Russell, a British teenager who took her own life in 2017, has resurfaced in UK media following a recent inquest into the circumstances of her death. The inquest found that the 14-year-old was following pages online which ‘romanticised self-harm’.  The coroner concluded that no one should be exposed to content of this kind on social media, especially not a child.

But is Molly’s tragic case an isolated incident? Evidence would suggest that, unfortunately, most teenagers are exposed to similar content on a daily basis.

Most of us could agree that our teenage years were a time where we sought to find out who we are. We tried on personalities like clothes. We went through phases. We were influenced by the friends we had in school or after school clubs and would slowly adopt aspects of their identity.

Perhaps some of us followed a band or a celebrity and wanted to be more like them. So, we would search through magazines and watch interviews on TV to find out all about their lifestyle in order to imitate it. A few months later our tastes would change and the cycle began again with a different celebrity or friend we desired to resemble, until we found our own identity.

According to a recent Ofcom report 90% of children in the UK have their own smartphone by the age of 11. What happens when young impressionable and unformed minds have access to thousands upon thousands of social media accounts, pages and influencers 24/7? When trends rise and die out on a daily basis? When the whole world can watch their every step? When people can anonymously criticise, bully or threaten others online? How can young people find and form their personal identity with the constant buzz of social media?

I asked various young people how social media use affected them. 23-year-old student Tyler told me: “Social media impacted me quite negatively. I felt very body conscious growing up as a teenager because I was constantly comparing myself to Instagram influencers and models. I also felt peer pressured by my school friends to create social media platforms because they all had them.”

“If I could go back, I would definitely not have social media, it’s so addictive and harmful towards the way we view ourselves as human beings.

Social media platforms made me feel like I needed to seek validation from other people on how I look, what I eat, how I dress etc. And that’s just a toxic way to live your life.”

A 2021 NHS study found that one in six of 6-16-year-olds in England are likely to have mental health issues, which is a major increase from the figures found in 2017. Of course, Covid lockdowns played a large role in the decline of young people’s mental wellbeing, but many children and young people like Tyler say they recognise the negative impact social media has on their mental health.

The past year has seen TikTok trends in which thousands of teens self-diagnose themselves with various mental health disorders and explain to the viewer why they might have the disorder too. Videos of teens describing the symptoms of rare mental illnesses like borderline personality disorder or schizophrenia are getting hundreds of millions of views worldwide and, all of a sudden, a large proportion of children consider themselves to have these disorders. What is more, they adopt these disorders as their identity.

Many of these TikTok videos present normal aspects of growing up and finding your identity as symptoms of rare mental health disorders.

One of the most viral trends on TikTok this year has been ‘a day in the life of someone with DID’ (Dissociative Identity Disorder). The videos consist of young people introducing the viewer to the ‘system’ (i.e. that particular person). This ‘system’ is run by various ‘alters’, that is distinct personas they adopt that share the responsibility of running the ‘system’. Each ‘alter’ has a different name, personality, accent, fashion style, age, gender and so on. The ‘alters’ have different roles in the ‘system’ and switch throughout the day to carry out various tasks. This trend has had thousands of teenagers worldwide posting an introduction to their own ‘system’.

Instead of understanding the person as one whole, distinct, complex and unique individual being, body and soul united, these trends fragment the person into separate ‘beings’ trapped in one body. These ‘beings’ sometimes even work against each other. Multiple TikTok videos show ‘alters’ hurting the body as they ‘sign off’ so that when the next ‘alter’ takes over they will feel pain. Thus they encourage self harm and unhealthy eating and sleeping habits.

What effects do the glorification and romanticisation of mental health disorders have on children? How can children learn to love themselves and accept their identity when they are told there is something wrong with them on social media?

George, a 19-year-old artist, told me: “I made a Facebook profile when I was nine. My older siblings all had one and I just wanted to be like them. I had to put a fake date of birth in because I didn’t meet the minimum age requirements.”

“I didn’t understand what I was being exposed to and it had a massive impact on my mental health. My for you page was filled with depressive thoughts and videos.”

“I learnt to over-dramatise my life because that’s what I saw online. I saw small things, minor inconveniences, as the end, a dead end from which I can’t get out of.”

Climbing into the social media rabbit hole can soon become a precipitous fall. Once people click on something, like it, comment or follow a page with this kind of content, the algorithm will thrust more and more of it onto their attention. The negative suggestions are only reinforced, convincing the consumer they have a major mental health problem when what they really need to do is turn off the computer and leave the virtual world for the real one.

So what can we do to limit the negative impact on young people? With legal protections for young people in other areas, should we consider a legal minimum age for social media?

The first step we all need to take is to evaluate our own relationship with these platforms. Am I in control of how much time I spend on them and what I consume or have I become a slave to the addictive dopamine hit that comes with scrolling?

Just as hunger motivates us to eat, the ache of loneliness brings out the desire to go out and build relationships. Silence gives us a space to reflect on our emotions and encourages us to delve deeper into understanding who we are.

This space can be positively filled through thought and reflection, prayer, reading, contact with nature, friendships or other ways. Or we can simply allow social media to fill the void.

Social media acts as an anaesthetic, it dulls the senses and creates the illusion of community, companionship and fulfilment.

It suggests identities for us based on algorithms and lures us into re-creating these identities on our profiles and ultimately in real life. But once the anaesthetic wears off and the screen turns black, reality seems too daunting and overwhelming.

We have to recognise these platforms for what they truly are. They are businesses. They make money from our attention. Therefore they are designed to be attractive and addictive to maximise profits.

This doesn’t mean that social media is purely negative and that we can’t use it to stay in touch with friends and relatives. The key here is, are we in control or is the algorithm?

Just as one can build a disordered relationship with food or alcohol, social media can become a road to destruction and addiction.

Over-consuming or using social media to drown out emotions, loneliness or silence in our lives can only have a dehumanising effect which pushes us down a path to depression and despair.

It is evident that the way we use social media currently is not healthy for young or old. At the moment, the responsibility of protecting children from these potentially harmful platforms falls to parents and caregivers. Giving small children access to these platforms has no real benefits in the long run.

Though it can be an easy quick fix, are the consequences worth it? Are we willing to choose our children’s mental health over our own convenience? As someone who has seen these tragic effects on my peers and has experienced some of them on my own skin, I say let’s fight for the innocence and safety of children.

I’m not suggesting we switch off technology or destroy social media platforms. But we do need to educate ourselves about the web’s dangers and how to avoid them.

Parents should learn how these platforms work and prescreen what their child is consuming. This might include equipping devices with child locks and child protection softwares. Those who want their small child to have a phone to be in touch when out and about might consider buying them one that does not have access to the internet.

The internet has been allowed to grow wild for far too long with little or no resistance. The tech giants have to be reined in, with international agreements to regulate them, including hefty fines when they cross the line.

Every challenge is an opportunity for growth. This particular one could be a wake-up call to foster real face-to-face, in the flesh communication within families, friends and communities.

We’ve tried the counterfeit and it doesn’t work. In a world that’s connected like never before, we are disconnected from ourselves and from each other. It is time to go back to the basics, to our nature, to what we were created for: communion with each other and, yes, also, communion with God.

Zuzana Revayova is a journalist, content creator and musician. She is happy to engage in discussions about politics, culture issues or current affairs but she equally enjoys a good chat about theology or philosophy. Zuzana has previously worked in youth ministry and evangelisation and is currently completing her MA studies in Broadcast Journalism.