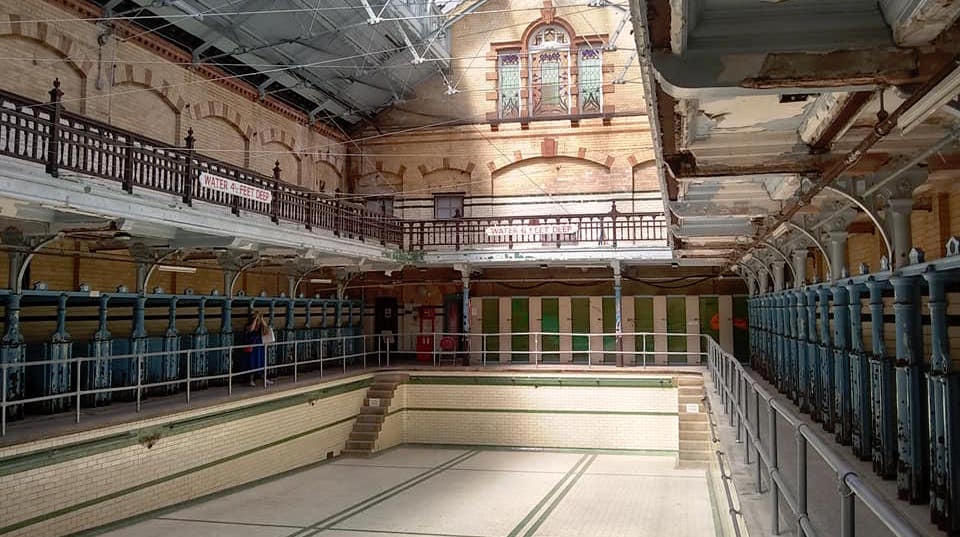 Adam Brocklehurst takes a trip to the baths to discover what makes a building great.

Some buildings are like magnets, they pull you inside and once you’ve crossed the threshold they demand answers. It might be because they are the birthplace of a famous person, or a government building that symbolises the national spirit, sometimes a place of religious or secular pilgrimage…

They are often more than wonderful architecture or places of important historical associations. For me it’s the social purpose, the position a building holds in the community it was built to serve, even simply being the focus of collective memory, that makes a building great.

In 1906 Manchester, the then-great industrial powerhouse in the North West of England, opened a sprawling complex of three large swimming pools, Turkish baths, and associated buildings. Within a few years of opening around 170,000 people were passing through the doors annually. An astonishing figure considering the lack of any tradition of Turkish bathing or swimming among Mancunians.

Known as Manchester’s Water Palace, the Victoria Baths are often cited as the finest surviving building of their type in Britain. A superb example of late Victorian eclectic architecture, influences are drawn widely. From the baroque, classical sources and the renaissance. The high façade of golden glowing terracotta and red brick, with marvellous bespoke detail, might suggest Northern Italy, the swan neck gables perhaps reference the Flemish low countries.

There are also elements of the arts and crafts movement, the British take on Art Nouveau, a movement with a strong socialist flavour, led by the likes of William Morris and later Walter Crane, who wanted to return to a partially mythical, politically egalitarian past, where goods were hand-made and functional, whilst still being beautiful. It was a response in art to the perceived inhumanity of a newly industrialised Britain.

For much of the 20th century the eclectic style was derided as perverse, representative of the lack of coherence in Victorian buildings, and it certainly is fanciful – it defies prototypes and categorisation.

For me, the absurdities and idiosyncrasies of the building are central to its charm.

Situated to the front of the building, the finest interiors are just as opulent as the exterior, and in the public areas, more arts and crafts detail is juxtaposed with Edwardian baroque. Baroque spoke of the confidence of England and its empire, looking back to the architecture of Christopher Wren, and Blenheim Palace, and in the early 1900s baroque was often used as the architecture of bureaucracy, of town halls and banks, of security and certainty. There are windows depicting sports scenes, besides a veritable garden of naturalistic plant life, calla lilies, roses, water lilies and more, all captured in vibrant stained glass. Beneath your feet auspicious oriental Koi Carp, skilfully rendered in mosaic, swim with great fluidity and realism.

As you enter the Turkish bath, you can still imagine the steam and heat, thick with the aromas of sandalwood and cedar. Directly ahead, a large stained-glass window depicts a serene, robed woman, her long hair flowing loose, she is rendered entirely in glass, in vivid purples and primary colours, and surrounded by limpid green foliage and bright flowers.

Although she has long been known as the Angel of Purity, with her iridescent butterfly wings, it’s not impossible that she is in fact a reimagining of the Greek goddess Psyche, the goddess of the soul. Perhaps her purpose is to remind us bathers of the link between a healthy body and mind, a very typically Victorian concern, and much in keeping with the Non-Conformist ethic of Manchester in 1906.

For all its beauty the baths’ purpose was first and foremost utilitarian.

According to The Manchester Evening News in 1906, they supplied ‘everything the most fastidious person may require’.

Many of the inhabitants of Manchester lived in cramped lodgings and tiny terraced houses. It was a constant battle to stay clean, there was the perennial staining yellow-grey smog from the mills and factories, the ever-present soot from the coal fires, which rapidly turned fabrics dingy and frayed.

Chamber pots and communal outside toilets rendered homes and clothing stained and malodorous in a way we can hardly imagine.

By the time the baths opened, the revolution in medical science had been underway for over 50 years and the links between poor health in the population and poor personal hygiene, as a cause of deadly pandemics, were being better understood.

Aside from the swimming pools, there were private baths, so those without an adequate supply of hot water were able to wash thoroughly. There were public laundries, so that housewives (for such they were in those days) could wheel in the family bedding and clothing for a mechanised weekly wash, freeing them from the mangle and copper, and the penance of laundry day.

The role of the new Victoria Baths would be central in continuing the battle to improve the city’s health. This was civic-led resistance against premature death, and high infant mortality.

There was no squeamishness in the city’s participation in this, indeed the city was proud enough to yell that pride from the rooftops. The baths were not simply a palace of water, they were a palace of civic engineering, a great temple to hygiene, and the grandeur of Victoria Baths was this pride made permanent in bricks and mortar.

Not all its associations were so positive, however. Regardless of the supposed socialist sympathies of elements of the architecture, at the time of its opening Victoria Baths were a microcosm of the unequal nature of British society at the turn of the 20th century.

The baths were as carefully as segregated as South Africa during apartheid, not by race but by class and gender.

The first-class pool was accessed by its own entrance, at a remove from the common folk and was of course a male-only environment. The elite could come and exercise here with their social peers. They might relax afterwards in the luxurious confines of the Turkish bath and discuss business.

The second-class pool was open to all men who could afford the fee. This was leisure of a more wholesome kind, better than what were considered the traditional working-class pursuits, of the public house, music and dance halls and gambling, and more interesting than the church, chapel or library. The men swimming here were also the recipients of the second-hand water, carefully cleaned by a state-of-the-art filtration process, but which, rather disturbingly, had previously washed the bodies of their social betters.

Last and by all means least was the women-only pool. Women then, as now, represented the majority of the population, and judging by the footfall at the baths, the numbers of swimming clubs and contest winners, they were as health conscious and interested in swimming as men.

Yet only one pool was provided for women, regardless of class.

Its entrance is austere in comparison to the men’s, and the only extra facilities for female use on the premises were the aforementioned laundry.

There is a certain tenacity of belief that ‘in the good old days’ women were the angels of the hearth, treasured mothers, wives and daughters. That there was a more developed chivalric sense, and that women today are not held in the esteem they once were. Well, the final destination of the water of the first-class and second-class pools belies that myth.

This was a society that regarded any woman as of lesser value than any man, regardless of her position, and there is no harsher evidence for this than the fact the women were condemned to swim forever in the stale water from the first and second-class male-only pools.

It’s a biting indictment of the social hypocrisy of the time and evidences the necessity for the radical change that came about thanks to the militancy of women such as Emmeline Pankhurst and the suffragettes, exact contemporaries of the building.

For many years the future of the baths was uncertain, they became run-down and finally closed in 1993. Such a large site nearby the city’s rapidly expanding hospitals and universities would have been regarded as valuable real-estate, and clearing the area of what was considered a great white elephant of a building with little architectural merit would have been popular with developers and the city council alike.

But thanks to a team of local conservationists the buildings were saved, even winning a much-needed cash grant on a national televised restoration program. This stage in the building’s life brought together activists, local residents and people who had used the baths alike. Without this communal and grass-roots response it’s unlikely we would be able to enjoy the building today.

The Victoria baths are indicative of what it takes to be a great building. Now that the unique beauty of its architecture has been re-evaluated and appreciated, it is a document for both the good and the less-savoury aspects of our shared past. And while it is no longer an operating swimming pool, it continues to promote health and wellbeing through regular ethical craft and food fairs.

Beauty plays its part too: simply being present in a beautiful place promotes many of the positive responses that make walking in nature so beneficial to our physical and mental health, a great gift in a built-up inner-city area.

Next time you are in Manchester and feel that magnet pulling you in … don’t resist.