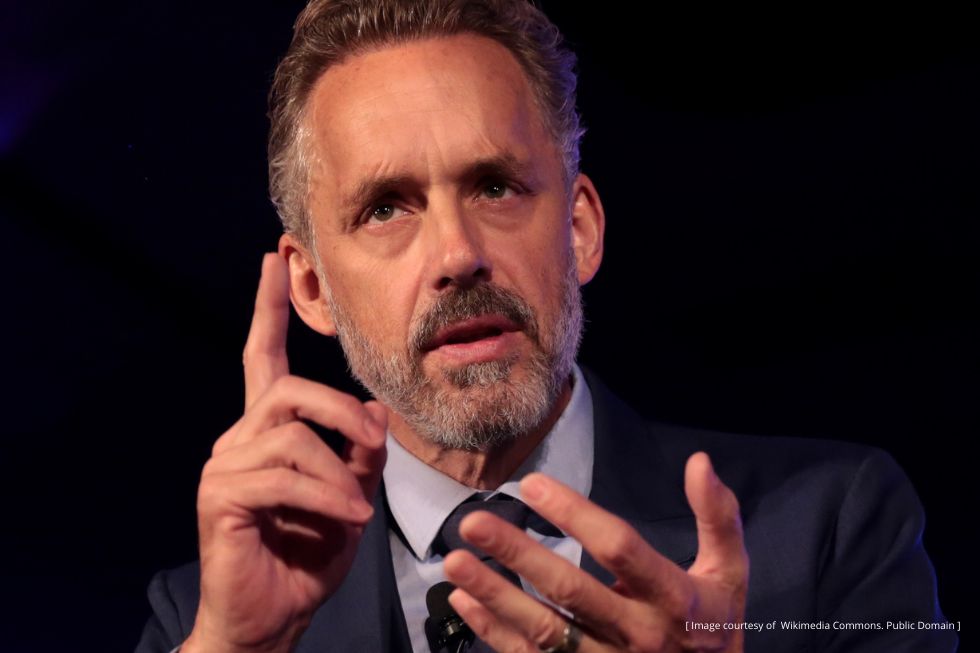 Francis Grimer offers an insight into the life and message of the phenomenon that is Jordan B. Peterson.

Why do so many people know the name, Jordan B. Peterson?

A doctor of clinical psychology and a professor at the University of Toronto with an engaging lecturing style and a penchant to wax analytical on children’s films. While quirky and interesting in their own right, such skills do not adequately explain why so many people around the world consume with such passion his work, and why so many others spit it out!

Peterson rose to fame, or infamy (depending on your perspective), when he put a video online of his opposition to an obscure Canadian Bill – C16 – which purportedly prohibited hate propaganda against groups that can be identified based on gender identity or gender expression but in Peterson’s own words ‘requires compelled speech…’ Simply put, it was a spat about pronouns: Peterson said that while he has used preferred pronouns in the past with students, he would refuse to do this when compelled by law.

As admirable as it may be to stand up and risk persecution for your beliefs, does this explain his huge popularity? After all, we are talking about sold-out events that involve hours long, intellectually demanding talks to hundreds of thousands of people across the world. That’s before you mention a Youtube channel with over 3.5 million subscribers and a biblical lecture series garnering tens of millions of views on Youtube. Not exactly stereotypical of what is popular fare, particularly among young men.

So why do so many men gravitate to his talks and become so enthusiastic about him? And what explains his meteoric rise?

One possible explanation is the lack of alternative, authentic, positive male role models. Many men have been deprived of these templates on which to fashion their behaviour, particularly father figures. With the decline in ‘traditional’ family households, more and more young people live with one parent, and 90% percent of single parents are women.

Against this backdrop, is it any surprise that men are searching for a clearer definition of their role in life?

They are failing in education (more women than men go to university), socially (we hear often about the problems of the patriarchy, toxic masculinity and rape culture), and sexually (one only has to think of the rise of the alarming InCel or ‘involuntary celibate’ phenomenon). Many commentators believe that men are starved of the love, affection and example of a good father.

This is not to say that women are not also the victims of these destructive situations – women after all will be the victims of men who have lost their way – but Peterson’s Youtube audience is predominantly male.

Beliefs and norms from the past have been eroded and replaced by slogans which at first, and to children, seem good but offer no nutritional substance for life in the long term. “Be true to yourself”, “love means never having to say you’re sorry”, “my truth” … the list is endless.

We are taught that the beliefs of the past are, well, past. That we have progressed. That the ideas, philosophies and structures of our forebears were all a bit primitive. That religion was merely ignorant superstition to oppress us. That we have gone beyond all this. That we are enlightened now.

We are taught furthermore to think with Rousseau that all men and women are inherently good if only institutions will leave them alone.

Many men think they are made to feel inherently sexist, racist and oppressive (consider Robin Diangelo’s ‘White Fragility’ or theories on ‘the male gaze’ or ‘critical race theory’). That they need to be trained not to be, that even if they don’t know it they have unconscious biases and prejudices which they must confess and about which they feel confused and often helpless.

Yet contradictions abound. While we rightly support the movement against the sexual exploitation of women, our culture also tells us that promiscuity is healthy and natural.

Boys are told the so-called ‘adult entertainment industry’ is good or at least nothing to be ashamed of, but if they follow the values inherent in such media they find themselves objectifying women and perpetuating a culture of toxic masculinity which society rightly condemns.

Raised in this milieu, it is little wonder that huge numbers of men feel unsure of their place in society, have trouble forming intimate relationships with women and are addicted to pornography, with all the mental health problems which accompany this.

Into this maelstrom of confusion, madness and hurt steps Peterson, articulating something that people do not explicitly realise yet recognise to be true on a fundamental level.

The message is simple but profound. You can bring yourself closer to heaven or put yourself directly into hell (understood literally or metaphorically). Peterson warns that you might find yourself one day in hell, and will need something or someone to bring you out.

He preaches meaning in responsibility. Pain and misery are real, yes, but meaning is even more real. We all know it is better to do what you should do and not just what you want to do, to pick yourself up and try again rather than wallow in self pity. We admire those who remain true to their ideals and themselves in the face of pain and suffering. We want to embody our ideals, because we know we are meant for more…ad majorem natus sum.

Most men want to be strong and admire strong men, which does not necessarily mean brute strength, but strength of character. Men often want to be physically strong, not, I would argue, because they like to be able to lift heavy things, but because it points vaguely towards true strength. A strength that is expressed in compassion and love. Deep down most men (and women) want to strive for something that is difficult but important in life.

So Peterson’s message, to pick up the heaviest thing you can and carry it, resonates with many men.

Peterson knows that the first step is the hardest, so he makes it light at first. “Clean up your damn room, stand up straight with your shoulders back …”

It is an invective against the nihilism which so many have fallen into. He offers encouragement not condemnation. His message is that things would be better if you did the right thing, not just for you but for everyone. That you should straighten yourself up before criticising or trying to straighten out others.

He offers a warning for what could happen if you don’t, telling his listeners to imagine the state of their life if they continue on their downward trajectory. He offers hard advice. If you have a problem with ALL WOMEN, then maybe the problem is with YOU. Which, while it may be a bitter pill to swallow, is, in the end, the only cure for toxic resentment.

Now you might say a lot of that sounds awfully familiar and can be found in the Bible and traditional religion. But the fact is that people have so turned their back on biblical and faith teaching that they must be brought to its wisdom gradually. They need to hear it from a new source, and a doctor of clinical psychology is a convincing expert for modern man’s sensibilities.

Which brings me to Peterson himself. It appears to me, and, I would wager, to many, that he is not a typical lecturer speaking on his own academic subject.

What makes him so different is that he is authentically grappling with the subject himself.

I think what I and many people see is a man who is immensely caring and passionate about truth. Seeking to share his thoughts with his audience to give them a better intellectual framework to live by, he offers positive nourishment to wean them off the cultural sugary treats and get them onto something to help them grow and flourish.

To his critics he is a reactionary peddler of old stereotypes, but to his admirers he offers a fresh take on what true masculinity is – responsibility, selflessness, integrity, determination and love.

He is the man who stands up for his convictions, not in the naive belief that he will not be harmed in so doing. He does it knowing that he will likely suffer as a consequence. He seems willing to suffer. Once he had taken up this mantle, and the public outcry against him began, he stood against it. He did not reply with personal attacks to the people who were attacking him, but criticised their ideas calmly and rationally. His message stood in contradiction to society’s which teaches a perverse primary duty to yourself and not to anything or anyone else.

The phrase “I must be true to myself”  means, if we are being honest with ourselves, “I want to be selfish and to act as if my actions are selfless.”

In many ways Peterson embodies many of the archetypal characteristics of the good father. So many young men find themselves without such a figure in their lives and thirst voraciously for one. It is in this role that Jordan B Peterson stands before his audience and for that I, for one, am truly grateful.

Francis Grimer is an aspirant to the priesthood and is hoping to join seminary in September. He is an avid reader and enjoys using his hands to make handmade rosaries from cherry wood. In his spare time he closely follows current events and has a particular interest in US politics. He is also currently learning French.