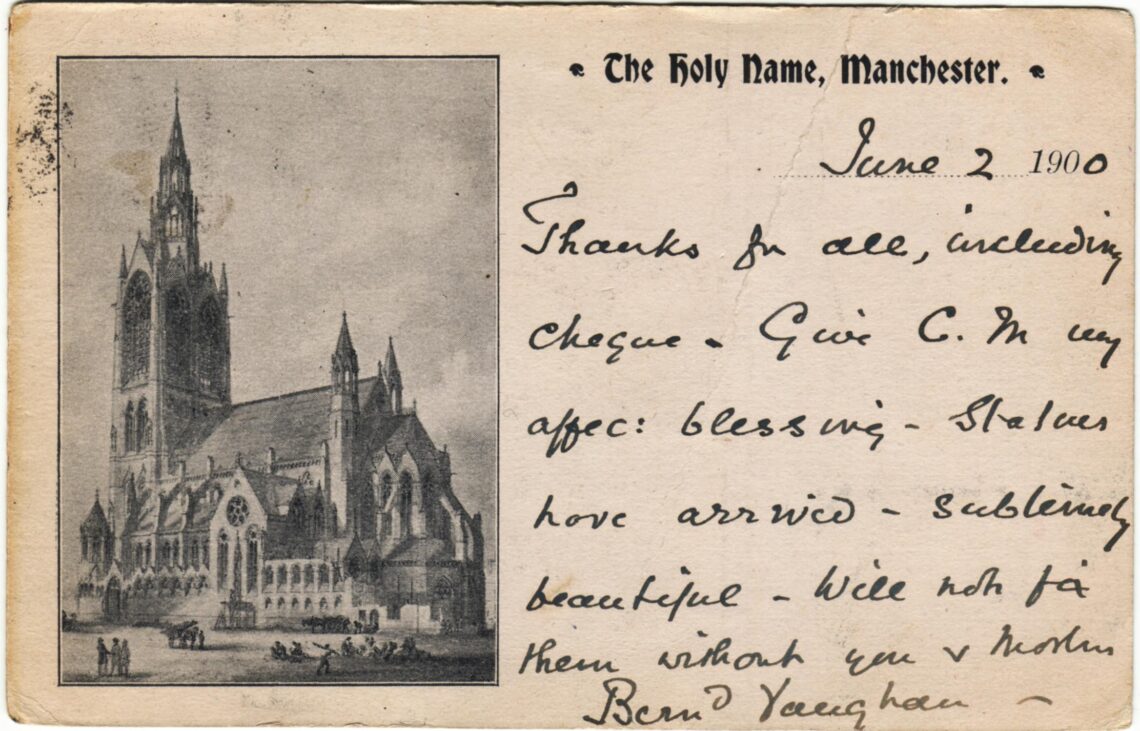 When Morrissey, patron saint of teenage angst and lead singer of The Smiths, opened his unusually upbeat Vicar in a Tutu with the immortal line “I was minding my own business lifting some lead off the roof of the Holy Name”, he understood that the City of Manchester’s historic Church of the Holy Name of Jesus Christ was sufficiently well-known not to need an introduction.

That’s certainly true for me. The church has been a landmark in my life since the day I was born at St Mary’s Hospital, just around the corner.

At various points in my life I’ve lived within sight of it, studied at the university in its shadow, worshipped there and was baptised in the church as an adult. As I’ve grown older it has become redolent with a lifetime of bitter-sweet memories.

I’m not alone. Many of the thousands who pass along Manchester’s busy Oxford Road every day feel a great personal attachment to this iconic church. And even though many more students from the surrounding Manchester University pass it by without noticing the building in the midst of their campus, all are blessed by its silent presence and every year a few are drawn inside by the architecture who will later commit to baptism into the Catholic Church.

The cathedral-sized neo-gothic bulk of the Church of the Holy Name of Jesus Christ was built for The Society of Jesus (Jesuits) between 1868 and 1871 by the worthy, if not always consistently inspired, York-born architect Joseph Aloysius Hansom. The land the church was constructed on was the gift of Lancastrian Catholic heiress and philanthropist Lady Mary Stapleton-Bretherton (later ennobled with the title  Marchesa Roma by Pope Pius IX).

The church cost a whopping £15,000, and this was without the high-quality fittings and fixtures which would be added piecemeal over the next three decades.

According to the architect’s original intuition, there should have been a lofty elegant tabernacle or shrine-shaped steeple, one of the most singular in design in the country, and, at 73 feet high, almost the match of the spire of the Catholic Cathedral of St John the Evangelist just a stone’s throw across the River Irwell in Salford.

However, after deficiencies in the design of the church meant parts had to be pulled down and rebuilt almost immediately, it was perhaps wisely decided to forgo a tower completely.

With improvements in structural engineering, nearly 60 years after the church first opened its doors, Adrian Gilbert Scott completed a much shorter and squatter tower in an idiosyncratic Gotham City flavoured neo-gothic style. Its great ‘cyclops eye’, to paraphrase Pevsner again, sternly observes the worldly, but not necessarily profane, shenanigans of the students in the austere, almost fascist classicism, of the student union building directly opposite.

A church is made of more than bricks and mortar, and for much of the 20th century the Holy Name served the initially impoverished, but ultimately thriving, immigrant Irish community who lived in the former merchants’ villas and modest working class ‘two up two down’ red brick terraces.

The church provided a warm ‘home from home’ for the many souls displaced by poverty and political turmoil in Ireland and was as much a social hub as a religious centre.

The Irish loyalty to the Holy Name remains strong, emerging out of shared hardship and communal memory.

It’s unsurprising then that there developed a deeply held belief that the Holy Name was the Irish church in Manchester. This was for many decades de facto true, but there is an earlier phase of Catholicism remembered within the church, involving another group of refugees of a kind, English this time.

In the 16th century the religious and cultural slate of England was wiped clean when the tsunami of the Reformation altered everything that had gone before. King Henry VIII, though perhaps only loosely influenced by radical Protestantism in Europe, saw in the movement a chance to rid himself of the paternalistic grip of the Pope in Rome, and several unwanted wives, and so took it up with gusto.

While in other parts of Great Britain the break with Rome would, with time, be comprehensive, there were pockets of lasting Catholic resistance which maintained strongholds in England, from the start of the Reformation right through to the complete rehabilitation of Catholicism in the 1830s.

Manchester and the surrounding county of Lancashire were at the heart of the underground Catholic Church in England, not only through the wealthy landowning lineage of Catholic recusants, but within the general population.

Can you imagine how the presence of the Holy Name felt to these tenacious and courageous Mancunian and Lancastrian Catholics, whose forebears had stuck firmly to what they believed in the face of terrible social and political prejudice and persecution and who were still considered second-class citizens in their own time?

The descendents of those faithful folk who had worshipped in the shadows, in barns, in secret chapels in ancient houses, could now enter blinking into the light and airiness of the interior of the Holy Name. And the evidence of this English legacy is part and parcel of the very stones of the church.

There are earlier Catholic churches in Manchester but none larger or more prominently positioned on one of the main arterial roads into the city, and none are more splendidly fitted.

The sanctuary of the Holy Name is open, there is no ornate rood screen or choir to break the focus of the congregation on the malachite and onyx enriched altar. The tall Portland Stone crocketed spires of the reredos (designed by Joseph Hansom’s son) not only draw the eyes upwards but are specifically designed to frame the Host during the adoration of the Blessed Sacrament.

The secondary focus, as in any Jesuit church (they are a teaching order, after all) is the pulpit, from which, in the Holy Name at least, a fascinating sermon is usually preached.

The concentration of the congregation may be distracted by the architecture of the pulpit itself, which is massive, overflowing with deeply carved foliate Brazilian green onyx. And all beneath a gloriously high Victorian pyramidal canopy.

One is brought back down to earth by the vivid mosaics, emblazoned with those English Catholic martyrs – depicted graphically with the instruments of their martyrdom – who paid the ultimate price for their fidelity.

The baptistry, polychromatic, ethereal and Northern Italian in flavour, is dominated by the marvellous onyx font with its free hanging font cover that always delights tourists, and its two resident Jesuit saints (St Peter Claver and St Francis Xavier).

But look a little closer and you will find wrought into the complex ironwork the names of the De Trafford’s, Manchester’s premier Catholic aristocratic family, whose ancient ancestral seat, Trafford Hall, once stood only a few miles away from the Holy Name. The Trafford name is better known today of course as the home of Manchester United football ground.

Dig a little deeper and you find many other benefactors to the church with links through land or family to members of England’s Catholic elite and many more of modest birth who put their hands into their pockets and provided the hard cash which allowed the construction and embellishment of such a magnificent temple.

The Holy Name celebrated 150 years since it opened last year.

The church remains a sanctuary for Catholic refugees fleeing persecution in their own countries, and many more immigrants who see life in England as a great opportunity for the betterment of themselves and their families.

As the church of the University of Manchester Catholic Chaplaincy, every Sunday the pews are crowded with students, both local and international, every continent on the planet is represented, and the backgrounds are more socially diverse than ever before. The church and its community form an integral part of the formative development of these young minds.

Many of these young people volunteer in projects as wide ranging as night shelters, food banks and preparing meals for student-led social events. The alumni often maintain lasting relationships with church and chaplaincy.  And with these people a new narrative is being woven into the building’s fabric and, for the time being at least, the church is theirs, and the new histories that arise will belong to them.

What the Holy Name leaves me with is a very gentle reminder of the dangers of regarding history or the past as a static thing, as something that cannot be reassessed. Even my own narrative here is open to debate.

History is fluid, formed of collective and individual memories as well as documents. It is made by breathing bodies and cold stones as well as by dusty archives. We learn more as we peel back the layers and question long held beliefs.

What remains true, however, is the role the Holy Name has played as a refuge for the marginalised, a place where people of every kind can find peace and solace in a beautiful building that was constructed with them in mind.