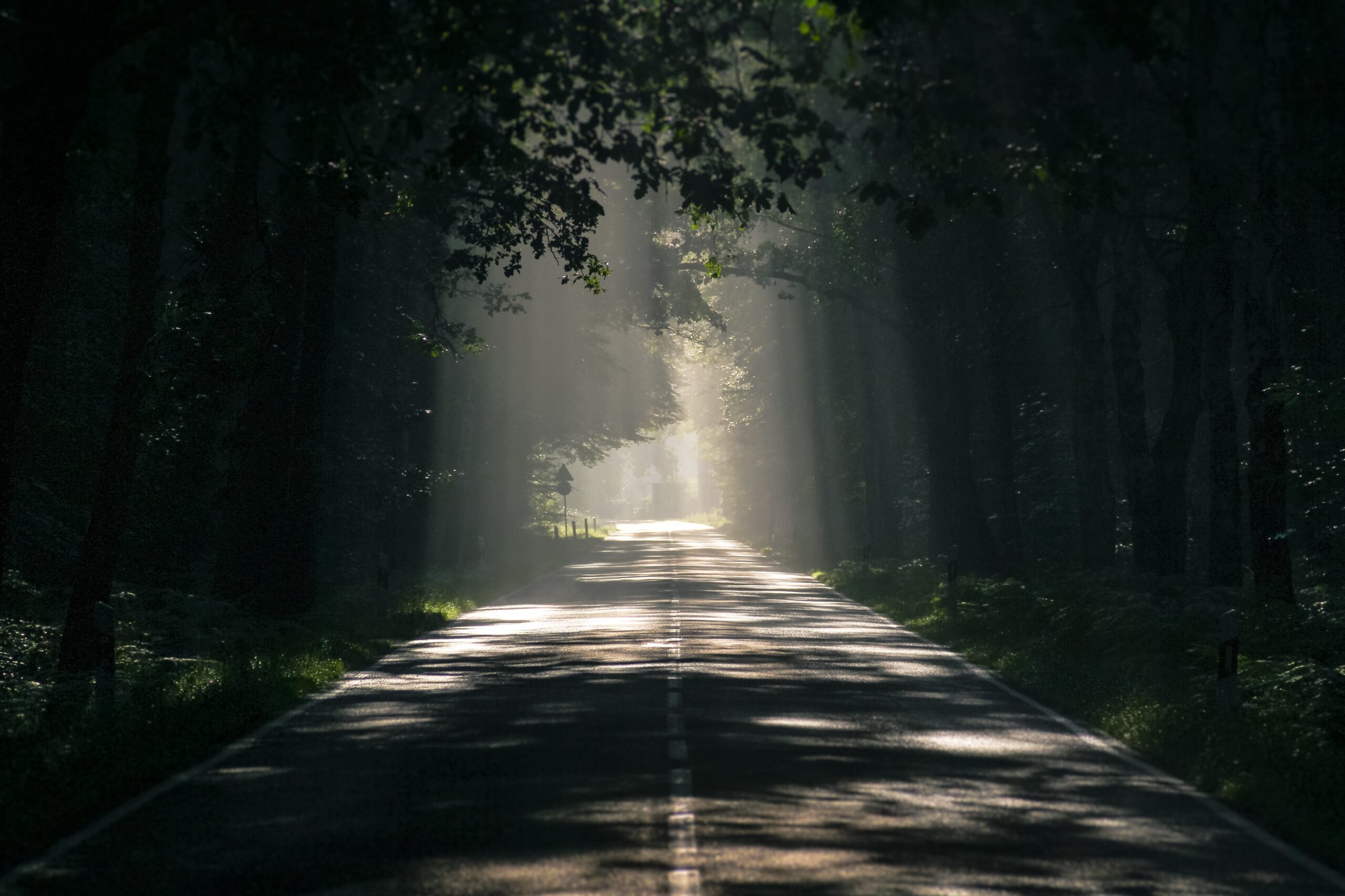 As the anniversary of the death of Pope John Paul II approaches, Ida Nieves recalls watching his funeral and experiencing a profound change in her life.

Walking into the building, I catch my breath. I always do. There are moments in your life when you have to stop and focus. Clear your head, ready your heart, cleanse your mind. Prepare yourself for anything. This is one of those moments. Going through the double doors of that building. It changes me a little bit every time…

The darkness and the quiet inside envelope me. I bless myself. To my left is a statue of St Anthony holding the Child Jesus. He’s a favorite saint of mine. To my right hangs El Senor De Escipulas -The Black Christ venerated throughout Central America and Mexico. I nod reverently to both. They are the first things I see whenever I enter and the last sights I see when I leave. I begin the long walk down the aisle to the front of the church.

Something compels me – it can’t be helped – to sit right at the front before the altar. It’s not something I can explain. It’s a feeling. Stopping at the pew, I bless myself again, genuflect, and take my seat.

This has become a daily ritual for me ever since returning to my faith back in 2005. I had lost my way.

I was 31 years old, living in the world, doing the normal things women my age did. I was trying to find myself. Trying to belong. I was so unhappy, and not at peace.

A late developer perhaps? People in their teens and 20s did what I was doing. I didn’t dress my age, I listened to Marilyn Manson, I went to clubs and got drunk with my co-workers and friends. And as for relationships – better not go down there. I didn’t worry about any of that when I was in high school and college. I was too concerned with trying to make it. In the end, I didn’t.

Though I refused to see it, I became seriously depressed and regressed into an awkward stage of teenage rebellion. Work was a struggle. I lived on my own, but it led to a sense of laziness, boredom and unworthiness. Friendships and relationships were difficult to maintain. I developed a loner mentality, keeping to myself, trying to make it through the day.

The ‘trying to make it’ attitude helped me to achieve some success and led to some happiness – mostly out of pride – but I don’t think it ever really phased me. The problem was that I wasn’t feeling anything. Except emptiness.

I can’t pinpoint exactly when I stopped feeling.

My childhood wasn’t always perfect, but I went about thinking I wasn’t going to let it affect me. I was so wrong. I fought it, but in the end, it wasn’t enough. I wasn’t enough. Everything came crashing in on me and I felt I had nothing, no one, to turn to. But there was one thing that I hadn’t counted on, one thing I hadn’t thought about. My faith.

Being raised a Roman Catholic, I had a pretty decent sense of God, of religion, of belief.

I went to catechism classes every Sunday, attended Sunday Mass with my family, went to confession and received communion. I celebrated all the high days and holy days as was traditional within my Hispanic culture. I can say, with all honesty, that back then I believed in God as much as I do now. With a childlike innocence and trust.

Times got difficult and by the time I was 13 or 14, the whole concept of religion became at best an afterthought in my mind.

Years went by. My faith became no more than a memory. My mental wellbeing slowly slipped away. I never thought I would break down, but I knew something was wrong. I didn’t believe in psychiatry, and my emotional problems were something I just couldn’t bring up with my Mom in a normal conversation. Praying or seeking out help never came to mind.

I was stubborn. Did my family notice what was going on? I’m not sure. They never said a word or asked a thing. I don’t blame them. How could they know I was falling apart inside? How could anyone? That’s the thing about mental illness. It’s something to be afraid of, rarely discussed, invisible but oh so real. The funny thing is, my mental illness helped me find my way back to God.

The Spring of 2005 was a difficult time for me. I was hiding a lot and it was taking its toll on me. Nothing was helping me, nothing was making me feel better. One day in April I was watching the news and had heard that Pope John Paul II had passed away. It was definitely the news of the day.

It was 2 April, and when I learnt the news at first, I was taken slightly aback. This was the leader of the Church I grew up in. A holy man, no doubt. An important man. And I didn’t know how I should feel about it. I had developed a sense of anger towards the Church and every time I heard about it or the Pope, I wanted to shut it out. It bothered me. I just didn’t know why.

A week or so later, I went to visit my Mom. It was 8 April. When I arrived, she had been watching TV. She had the news on, and they were broadcasting live coverage of the Pope’s funeral. I cringed. It wasn’t my house, and I wanted to be respectful. So, I had no choice but to watch with her. I sat there and I remember a sense of dread coming over me as I watched the mourning of a man whom I couldn’t feel a thing for – whom I didn’t know, respect, or believe. There were a lot of people attending it. Cardinals spoke on and on … And I got more and more uncomfortable. Then something happened that I will never forget.

It got windy there in Rome. Very windy. That got my attention – I mean, I REALLY started to pay attention. After a while I realized the significance of this moment. A Cardinal at some point placed the open book of the gospels on the casket. The Litany of the Saints had just been chanted. There was silence as the wind blew open the pages of that book. It was eerie. And it struck a chord with me. I was overwhelmed by it all, and in the end, I felt so sad – so guilty – and I got upset.

That feeling stayed with me for quite a while afterwards. Why had that funeral affected me so much? Was someone, something, trying to tell me something? Was it a sign? Had I finally just completely lost my mind?

After so many years of not bothering about God or religion, the funeral of this one man got me thinking. I couldn’t ignore it anymore. One day, I found my old Bible – one that I had actually only got for an English Classics class in college – and found myself with a need to open and read it. I felt that somehow, somewhere in that Bible, I would find the something that would make me better.

Picking up that Bible helped me realize that I had to turn back to God if I was going to save myself and my sanity.

I spent days struggling with how, and dwelling on the fact that I would have to actually get to a church, confess to a priest, and start attending Mass to be reconciled with the Catholic Church. The thought didn’t appeal to me but on 24 April 2005 that is exactly what I did.

It was the most nerve-wracking, scariest thing I had ever been through. The priest, Father Antonio, listened to me attentively as I got his attention after the Mass I sat through. We spoke. He helped me through confession, was kind and caring and understanding. He would become a trusted confidante for many years starting from that moment.

As I said my penance, it felt as if a giant weight had been taken off my shoulders. I started to feel a change in my heart and mind. I started to feel better. Happy. At peace. I had finally found my place, my home. And I never looked back.

Now, 15 years later, I’m still here. It hasn’t been an easy journey. Mental illness never is, and you’re never cured. I’ve had many ups and downs, sought professional help, been on medication. Sometimes I still have those awful feelings. But before I let them pull me down, I know that there is a safe place that I can go to. I know that I am more than a person with mental illness. And I am not ashamed.

Sitting there in the pew, I stare straight ahead at the altar. The candles have been lit, and their glow is soothing and comforting. No matter where my head is at, all I have to do is focus on that light and I find my way back. That light is my hope, and, getting on my knees, I give thanks in prayer for a way through the darkness…

Ida Nieves is of Puerto Rican descent but has lived in New York her whole life. Ida writes fiction, novels, short stories, and poetry and has had work published in the International Poetry Hall of Fame. The topics she loves to write about cover the full spectrum of love, sadness and heartbreak, depression, daily life, and cultural and political issues. Her favourite authors are Emily Bronte, William Shakespeare and Charles Dickens.