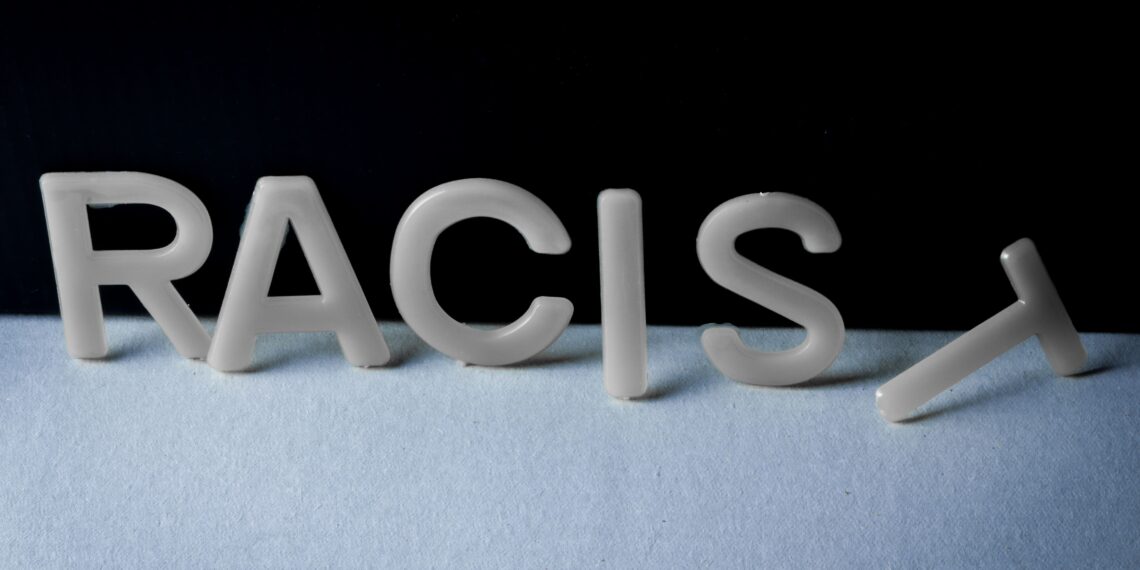 John Kline reflects on how explosive words like ‘racist’ and ‘hate’ are designed to rattle us.

In an interview some years back, former Marxist-turned-conservative journalist Peter Hitchens was asked why the Left in his native England switched from using the term racialist to ‘racist in the late 1960s. He didn’t know, he said, but if he had to guess, it probably just sounded better to shout.

More and more, linguists and phonologists are finding a non-arbitrary relationship between the sound of words and the feelings they arouse in people. Specific sound profiles of words, they assert, can affect their meaning for people at a deep psychological level.

Using fake words, for instance … Neuroimaging studies have found words like kiki to be emotionally arousing whereas words like bouba are calming. As researchers have concluded, specific sound profiles ‘implicitly influence language-users in their final emotional judgment about the meaning of words’.

This research applies especially well to words like racist and hate, words that have become increasingly expanded and applied to new arenas, failing, as a result, to communicate much, if any, meaning to the listener. There are phonetic features in these words that help explain why they have morphed into ‘scare terms’ or ‘devil words’, which, as the Oregon Association of Scholars (OAS) describe in a recent report, are frequently deployed by professors and students simply to quash opposing views. The OAS calls the practice ‘the New Censorship’.

A big part of the deployment of words such as ‘racist’ and ‘hate’ on college campuses is their phonology – they are phonetically designed to rattle us.

So, it’s important for targets of these labels (who are often progressives themselves), as well as third-party listeners, to understand that the feeling of shock and paralysis these words can engender (and the vitriol with which they are uttered) often has less to do with their actual applicability than with how they sound to the human ear.

More broadly, it’s also important to understand that, to the extent they do windup and excite, these labels derail constructive engagement and chill open inquiry.

That sound affects meaning isn’t surprising, of course. The entire marketing industry, for instance, is based on the knowledge that one can construct and deploy words with the aim of creating certain effects (positive/negative, arousing/calming) or emotions (fear, disgust, etc).

Studies of branding have found that a product’s name can modify consumer expectations about the possible attributes of the product and that ‘names with negative sounds [are] least preferred regardless of product category’. One illustrative study found that undergrads presented with the fictitious ice cream brands Frosch and Frisch believed the former to likely be richer and creamier.

Poetry too is similarly concerned with sound’s effect on perception and the elicitation of emotions. Think of the aural vividness of Poe’s use of onomatopoeia and the tension it creates early on in The Raven: “As of some one gently rapping, rapping at my chamber door / ’Tis some visitor,” I muttered, “tapping at my chamber door…” And as with both marketing and poetry, using sound structure to influence psychological reactions and evoke a certain emotional impact works for political and social activism as well.

The phonology of arousing words

To better understand the feelings aroused by the words racist and hate, let’s break down the sounds in each, starting with the repeated ‘s’ sounds in racist.

Phonologists define ‘sibilant sounds’ as those made by pushing air through closed teeth (for example, She sells seashells). These sounds accompany strongly stressed consonants, most commonly ‘s’, spoken with greater oral pressure and higher muscular force than others. When stressed, the ‘s’ sound results in a ‘literally high-arousing hissing sound’, potentially functioning to attract the attention of others (for example, “psst!”). It is partly this hiss that makes a word like ‘piss more vulgar-sounding than pee, even though they are the same thing.

On top of the sibilant hisses in the word racist, also consider the ‘t’ at the end of both racist and hate. Phonologists label letters like ‘t’ (as well as x, p, and k) as ‘explosive consonants’, which are consonants that pop or release a tiny explosion of air when pronounced (you can blow out a lit match when you say them) — think of Poe’s explosive deployment of ‘t’ sounds in his poem The Bells:

“Hear the loud alarum bells- / Brazen bells! / What a tale of terror, now, their turbulency tells! / In the startled ear of night / How they scream out their affright!” These sounds, especially when in close succession, create a cacophony in the ear.

Like f, k, s, and sh, t is also a voiceless consonant, meaning it is pronounced using only the tongue, teeth, and lips, not the lungs – notice there’s no vibration in your throat when you pronounce them. Especially when found at the end of a word (giving the word a ‘voiceless stop’, as they say), sounds like ‘t’ have been found to amp up one’s feelings, energy, and emotion. ‘Racist’ and ‘hate’ both contain explosive consonants and end with a voiceless stop.

Let’s consider another word, which shares the sibilant ‘s’ and the explosive ‘t’: ‘fascist’. This increasingly used attack word also contains short vowels (think ‘tap’, not ‘tape’; ‘pick’,” not ‘pique’), as in the ‘a’ sound in the first syllable of this word and the ‘i’ sound in the second syllable. Phonologists have discovered that short vowels have relatively arousing and negative effects on the listener.

So how much can the phonetic features of these three words (racist, hate, fascist) account for their expanded application (or ‘concept creep’), their increasing frequency, and the vitriol with which they are used? Likely, quite a bit.

The increased use of aggressive speech

Hate, racist, and fascist have become swear words. Like the four-letter words, they are often used performatively rather than as vehicles for communicating real meaning.

Also, say researchers, swear words usually ‘possess specific phonological patterns that can potentially amplify the negative emotional response’. They use the example of George Carlin’s famous bit on the ‘seven words you can’t say on television’. Every single one of them contains a short vowel and either a voiceless stop (t or k) or a hissing sibilant. A slightly clunky analogue to hate, racist, and fascist then might be the ‘three words you never have to justify’.

As mentioned, researchers have found the word ‘piss’ to be worse than ‘pee’ to the human ear – note the former has a voiceless consonant, a short vowel, and a hiss. This might help explain why hate, racist, and fascist are often chosen over their synonyms or even more accurate words.

Take ‘hate’, for instance. Canada criminally prohibits ‘hate speech’, and when trying to deal with such a difficult and vague charge (which can land one in prison for two years), courts have employed a string of synonyms to try to narrow down its meaning. Most commonly, ‘hate’ is legally defined as an ‘intense and extreme’ emotion, which, when promoted, ‘instil[s] detestation, enmity, ill-will and malevolence in another’. But, while most of these synonyms are perfectly adequate as a replacement, none of them deliver the same stinging impact as hate.

That students use hate, racist, and fascist so often on college campuses and social media may help explain the particularly tense campus climate.

As has been said elsewhere, ‘success’ in the social media context, in particular, means building a reputation for oneself and generally rising above the din. For many, this means loudly signaling one’s commitment to a moral cause and ferociously attacking ideological opponents. It is no surprise that users resort to sharp, performative language and ‘attack words’ on these platforms. After all, if one’s concern was truly to negotiate differences, one would use the opposite of ‘spiky’ language as much as possible (that is, more ‘bouba’ words and less ‘kiki’ ones).

What should be done

Promoting a better understanding of the psychology of phonology, and in particular the sound profiles of scare words like racist, hate, and fascist (by educators whenever they’re used threateningly in class, for instance), will help reduce the cacophony and allow listeners to see that these labels are commonly used performatively.

Knowing that such rattling language is often deployed for reasons other than the words’ underlying meaning and literal applicability could also foster resilience in the targeted listener.

Better education in this area would make more room for measured dialogue and constructive disagreement, and help students recognize that using these terms shuts down good-faith debate. Students should state as much when an interlocutor deploys these labels. Achieving an understanding that they can be used as a ‘trick’ to subconsciously rattle the listener and/or the audience is the main goal.

By better understanding the phonetics of scare words, the true (if subconscious) motivations of their users, and the psychology of ourselves, we might be able to bring the temperature of our social and political dialogue down to more manageable and rational levels.

So the next time you hear someone throwing around the words racist, hate, or fascist, recognize the sibilant ‘s’s, explosive ‘t’s, and short vowels for what they are – performative language and an ineffective debate tactic – before moving on undeterred.

This article was originally published here on Heterodox Academy. It is republished under Creative Commons (Attribution, Non-Commercial, No Derivatives 4.0 International) license.

Author bio: John Kline is an attorney from Virginia. He has written for the American Spectator, Russia Today, Areo Magazine, and Law & Liberty. He has articles coming out soon with the UK’s Critic Magazine and Chronicles Magazine (print edition).