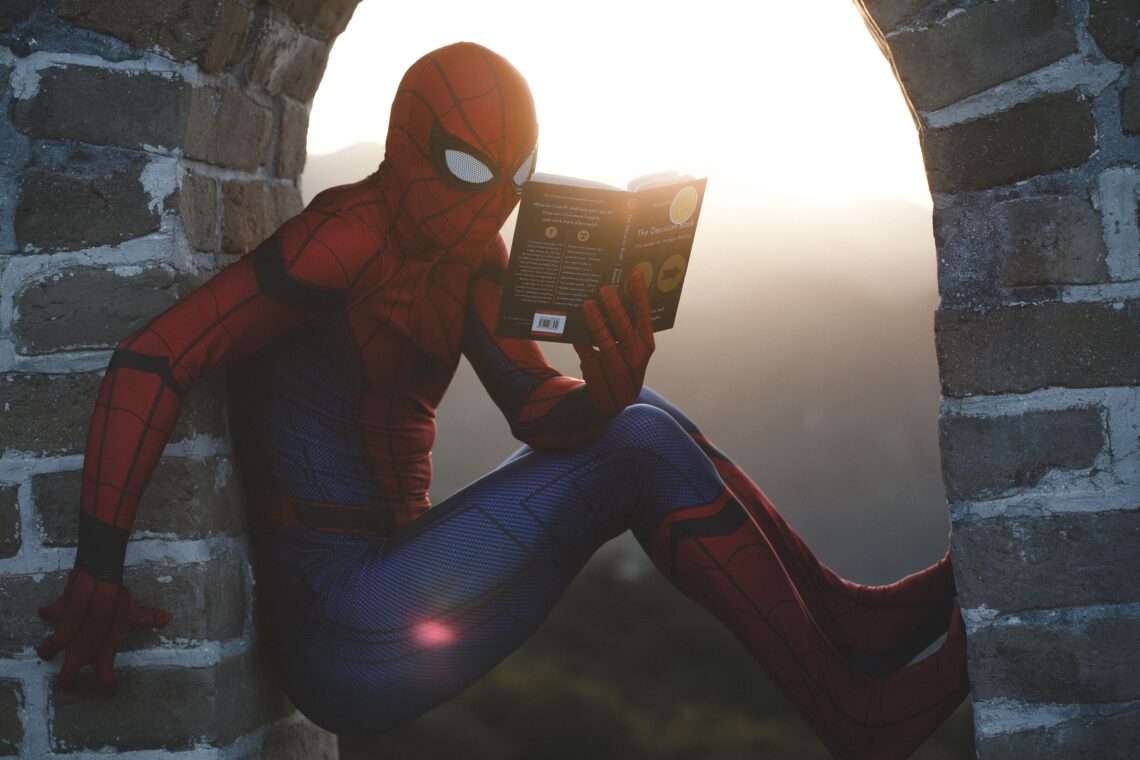 Sean Hurley looks at the hidden themes in the latest Marvel blockbuster.

Who needs Plato when you can learn your philosophy from a superhero? That’s the question I found myself asking as I reflected on the extraordinary success of this cinematic hit.

Since Spider-Man: No Way Home was released in December 2021 it has made nearly two billion dollars at the box office worldwide. The film has received rave reviews from critics with an 8.3/10 rating on IMDB and 93% on Rotten Tomatoes.

But as the dust begins to settle after its remarkable triumph, the time has come to ask what exactly made the film so successful.

My theory is that it contains many universal ideals which resonated with viewers and acted as a kind of philosophy primer to audiences who signed up only for a couple of hours of escapism and popcorn-fuelled entertainment.

For a start, the film contains a stark study of the difficulties of fame. The arch-villain Mysterio (aficionados might remember him from the previous movie Spider-Man: Far From Home) reveals Peter Parker’s identity at the beginning of the action and the consequences are predictable. Peter is made a pariah by the media, he is prevented from living a normal life and his close friends and family suffer the knock-on effects.

There has been an almost endless discussion of the fact that we live in a Panopticon society of constant surveillance but I think this aspect of the film shows an increased awareness among the public in recent years of the curse of the cult of celebrity.

Many stars – from Justin Bieber to Matthew McConaughy – have spoken about the alienating effects of stardom. In a particularly stirring podcast, McConaughy revealed his hurt at his  perception that his mother’s primary motivation for loving him was due to the fact he was a celebrity, rather than for simply being her son.

It is possible to gloss over these stories, but they are revealing insofar as they expose the desire in every human heart to be loved for being oneself rather than for utilitarian purposes.

We want to be loved for who not what we are.

Observing this dynamic unfold in the lives of celebrities at a distance is a continual source of fascination for the viewer.

Another key theme of the film is memory. Peter wishes everyone to forget who he is. He visits Dr Strange to arrange this, but disastrous consequences arise when midway through the spell Peter includes the caveat that his close friends and family must retain the ability to remember him.

In truly melodramatic Marvel style, pandemonium breaks loose as the strands of space and time in the multiverse begin to unravel and adversaries of Spider-Man from other universes begin to inhabit his universe. This sets the scene for a glorious trip down memory lane, where among others, Willem Dafoe, Alfred Molina, Toby Maguire and Andrew Garfield make unlikely resurrections in reprising their roles.

Nostalgia is a universal human sentiment. It gives the past  an added lustre when it is reflected on after the passage of years. Seeing many childhood heroes and villains enjoy an unlikely renaissance on the big screen not only fills the viewer with a fuzzy sense of feel-good joy but also provides the delight of an unforeseen comeback for former heroes.

The experience of seeing the spectre of Toby Maguire resurface as Spider-Man produced a similar effect on me to hearing Bruce Springsteen defiantly sing Western Stars in homage to the cowboys of yesteryear. His presence is redolent of simpler times before the rise of avocados or Mark Zuckerberg.

There is a particularly poignant moment at the end of the film when, in order to save the world, Peter has to agree to a spell being cast where everyone he loves forgets who he is, including his beloved girlfriend.

This plot device raises the transcendental question of love, of whether we ultimately live in an anonymous unsentimental material universe which is indifferent to such powerful influences or whether love will always find a way.

A recurring motif in Marvel films is the idea of transhumanism. Many of the superheroes and villains transmogrify typical human limitations and this film is no exception. During a duel with Dr Strange, Peter is separated from his physical form as Spider-Man and appears as a ghost outside of his body. The brief episode touches upon questions regarding the existence of the soul and the nature of its interrelation with the body.

Whether the relation of the soul to body is best typified by a dualistic, hylomorphic or material understanding of human form has racked the brains of some of the greatest philosophers for centuries. Spider-Man poses the question in modern form to cinema audiences without their even noticing.

The most fascinating moral issue explored in the film is an exploration of the struggle between taking pure Nietzschean will to power or Christian charity as a guiding ideal for one’s life.

Aunt May is the archetypal good-doer who exhorts Peter to seek to rehabilitate the different villains who are thrust into his life, rather than simply send them back to their respective universes and deaths as Dr Strange urges.

In a particularly chilling scene, the Goblin begins to strangle Peter and says, “Your weakness is morality, it’s choking you”. He goes on to state: “Norman was right about that pathetic sickness, he tried to fix me, now I am going to fix you … no good deed goes unpunished.” The Goblin then proceeds to murder Peter’s aunt.

This bereavement precipitates an existential crisis in Peter. Are the ideals that Aunt May stood for pyrrhic or futile at the end of the day? Ought he to embrace the same will to power of the supervillains in order to destroy them? Is revenge the only way to achieve justice?

This debate between revenge or mercy is played out in Spider-Man in the remainder of the film as he struggles to choose his path.

In conclusion, although many of the themes touched on by the film are dealt with in compressed form, its popularity attests to its willingness to explore issues which affect every human being. The film does not just offer glamorous  A-Listers and expensive CGI, but also grapples with universal questions.

Not what you expect when you buy your ticket!

Seán Hurley is passionate about literature, philosophy, films and music. His love for the Great Outdoors sprang from growing up in the South-West of Ireland. His favourite pastimes include exploring the Wild Atlantic Way or meandering about Dublin Zoo or the National Botanic Gardens when he is stuck in the city.