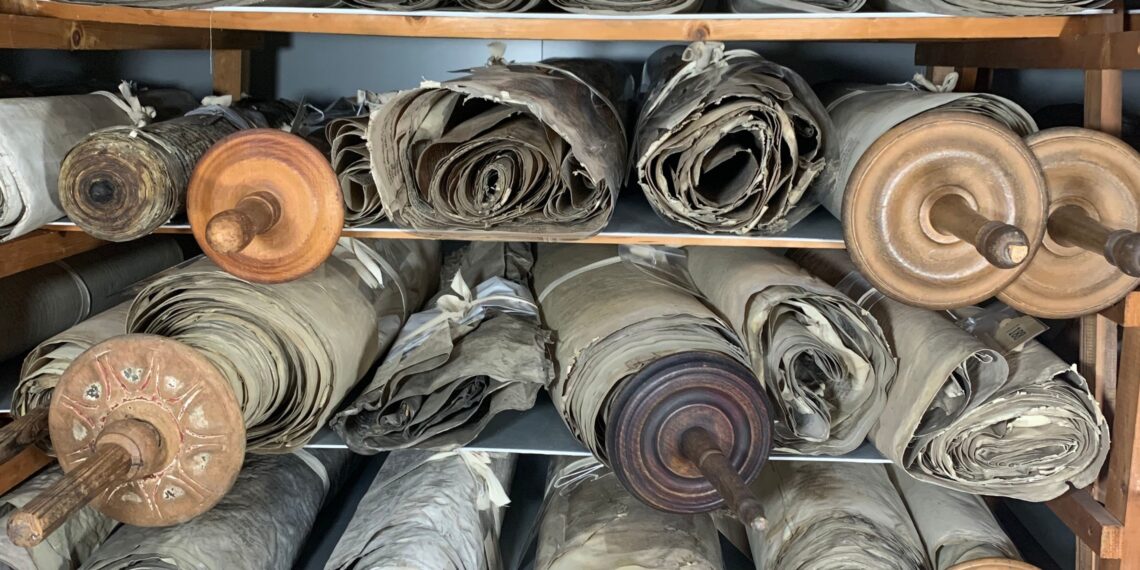 Lisa Fraser finds a little known centre in London which speaks loudly of the sufferings and the wisdom of the Jewish people.

It’s a sad reflection on British society that many synagogues in the UK have to employ private security guards to protect the building and the worshippers inside from violent attack.

Kent House, the home of the Westminster Synagogue and museum, is open to all but, for safety reasons, visits must be booked in advance. This fact says a lot about the situation of the Jewish people, even in a country like the United Kingdom which prides itself on its tolerance, and even in modern times.

When I visited the place in April, the first thing I saw was  the security hut and the CCTV cameras at the entrance, making the arrival intimidating to say the least.

Yet, once I entered the synagogue, I felt at home.

There was no cultural or religious barrier between us. We were told: “Everyone who cares about the Torah is our friend and is welcome here.” A few minutes later, we were laughing over a cup of tea and commenting on historical anecdotes about the place.

An elegant Victorian house in London’s affluent Knightsbridge district, Kent House has an intriguing past: it ranges from what the modern tabloids might call a ‘royal love nest’ – a place for the former Duke of Kent to meet his mistress back in the early 19th century – to wartime offices in the 1940s.

Westminster Synagogue acquired it in 1959 and has gradually restored it to its original splendour.

The collection of artworks signed by the Belarusian-French artist Marc Chagall particularly impressed me: the walls downstairs are ornate with his colourful engravings of Judeo-Christian scenes, replete with fishes, Menorahs and kingly figures.

The books on the shelves of the library demonstrate the brain power and creativity of the Jewish community, as well as its contribution to modern thinking. At a glance, I spotted books by Einstein and Freud. Other books are a painful reminder of the traumatic history of the Jewish people: Primo Levi’s If This Is a Man is just one of the many examples on display.

Moving on to the first floor, we were kindly allowed to see the Sanctuary, the heart of the synagogue, the Jewish place of worship. Welcoming us (non-Jewish visitors) to the heart of their religious practice was a powerful sign of generosity, fraternity, and trust.

Two distinctive features caught my attention. On one side of the room, the Ark (the cabinet which enshrines the sacred scrolls known as the Torah), made from the original wood fireplace, is said to be unique in the world. This makes sense because arks are not usually located in chimneys!

Opposite the Ark is the organ. Practising Jews are not supposed to ‘work’ during Sabbat (i.e. Saturday, the Jewish holy day), and the most Orthodox communities consider that playing a musical instrument during a religious service is a form of work. The Westminster Synagogue is slightly different, as it describes itself as a Progressive Jewish Community.

On the third floor of the building is one of the rarest, most hidden and historically valuable treasures in London: the Czech Memorial Scrolls Museum. It tells the story of 1,564 Czech Scrolls rescued from the then-Czechoslovakia by Ralph Yablon, who donated them to the Westminster Synagogue in 1964. Shortly afterwards, the Synagogue set up the Memorial Scrolls Trust Museum as an independent charity responsible for the scrolls.

A Sefer Torah, or Torah scroll, comprises the five books of Moses, the first part of the Jewish Bible: Genesis, Exodus, Leviticus, Numbers and Deuteronomy. Jewish communities have gathered around these most sacred texts in Judaism for millennia, reading from them three times each week as well as on religious holidays.

Most of the historic scrolls in Central Europe were destroyed by the Nazis, commencing with the infamous Kristallnacht (The Night of Broken Glass) in 1938, when thousands of pogroms were organised simultaneously by Nazis in Germany, Austria and parts of Czechoslovakia. Bohemia-Moravia was somehow spared – however only at that time.

In 1939, Hans Günther an SS-Sturmbannführer, was appointed head of the Central Office for Jewish Emigration in Prague, and was in charge of the deportation of Czech Jews to death camps during the Holocaust.

For reasons which remain unknown, he agreed that a collection of more than 200,000 Jewish objects, collected from every community in Bohemia and Moravia, should be shipped from over 150 towns to the Central Jewish Museum in Prague. There they were catalogued and labelled by Jewish librarians and curators, few of whom survived the war.

The impact of this decision was considerable: a goldmine of objects was saved from destruction and loss. It allows us to be connected with the communities which went on to be persecuted, arrested, and almost annihilated. Through these scrolls and objects, these communities, and these individuals, haven’t completely died.

At the end of World War Two, the Jewish communities in Bohemia-Moravia, as everywhere in Europe, were shattered. Yet, some of the traditions, and some of their sacred objects, remained.

The small communities remaining in the area enjoyed a few years of freedom … until the 1948 coup by the Communist Party of Czechoslovakia, backed by the Soviet Union.

While the Communists did not explicitly aim to annihilate the Jews in the same way the Nazis did, they closed down all Jewish religious and cultural activity and actually destroyed more synagogues than the Nazis.

The scrolls were moved from where they were being stored in good conditions, and dumped in a damp warehouse to rot. Over time, they suffered from mould and other enemies of the vellum they are made from, which is a biodegradable material.

A few years later, the Communists sought to make money out of some of the residual Jewish treasures in their possession. Miraculously, the scrolls were offered for sale to a London art dealer, who, though not interested in them himself, approached Ralph Yablon, a solicitor and philanthropist. Even more miraculously, Yablon donated all the money requested, securing the purchase and so two trucks full of scrolls arrived at Kent House in February 1964.

Since then, the slow process of stabilising and restoring these sacred objects has continued and it continues until our own times! The work involves removing the mould from the scrolls, and often redrafting some of the letters, following the very rigorous process set out millennia ago. Some scrolls have also been carbon-dated,revealing that the most ancient text of the collection was made circa 1150! It makes it one of the most ancient and valuable texts in this country.

This process – both the acquisition of the treasures, and their restoration – relies purely on the generosity of donors across the world, some of them Jewish, but not all of them. The Memorial Scrolls Trust is a not-for-profit organisation, and it does not receive government funding.

The scrolls are also loaned to Jewish communities across the globe, but they are never sold or donated.

A map in the museum reveals the global outreach of this project: the scrolls connect the Trust to almost all the continents, from India to New Zealand, Argentina to Alaska, including loans to countries across Europe, Israel and the US. The map reveals the impact that persecutions had on these well-established communities: the Holocaust scattered them, but it did not annihilate them. But more positively, it also demonstrates that the Jewish faith is still strong and alive across the world.

Human losses cannot be recovered, but faith is passed on.

The volunteers at the Trust invest a substantial part of their time investigating history. The labels put in place by Hans Gunther’s teams during World War II helped trace lost communities. However, there is still a titanic amount of work required to connect the dots, to find the survivors and their descendants, and build relationships. The volunteers, through the objects in possession of the Trust, help fill the gaps in history, and rebuild communities.

Lockdown has accelerated the use of emails and zoom calls, which surprisingly has helped this process. It also helped the Trust reach out to different audiences willing to explore the topic.

The Trust plays an important role in educating the young (and not so young) generations, both about history, and about the Jewish faith. As a French person, I was deeply moved and ashamed to see on display at Kent House a yellow star bearing the word ‘Juif’, which the Vichy Government forced Jewish people to wear during World War II. The trust can also help younger generations experience that we’re all brethren, belonging to the same human race.

More positively, the volunteers have amazing knowledge to share about Judaism, its traditions and its art. For instance, I enjoyed hearing for the first time a sung Barechu, the Jewish call to prayer. I also learned about the art of writing a sacred scroll: ‘no metal nibs’ and ‘no work from memory’ are among the many rules to be followed when preparing a sacred parchment.

My visit to Kent House was touching and informative. I was moved to tears many times, as when I saw pictures of smiling Jewish people next to panels narrating their lives and sacrifice. It is also a place of hope for a better future.

My visit resonated particularly with current issues, and the collection has a lot to say about the troubles our world is currently facing…

I strongly encourage you to visit and experience the museum – you can start online here.

One of the volunteers who generously gave the tour said he concluded every visit with the same sentence: “What we have in common as human beings is more important than what divides us.”

As I left I asked Jeffrey Ohrenstein, Trustee of the Museum, what message he would want young people visiting the centre to take away with them. His answer was wise … “History has a habit of repeating itself, albeit in a slightly different format – for instance, some anti-Semites hide under the umbrella of anti-Zionism. Beware of lies repeated again and again as there is a danger many begin to believe them. Remember what you have in common with others, not your differences.”

The cover photo of this article is also courtesy of the Memorial Scrolls Trust.