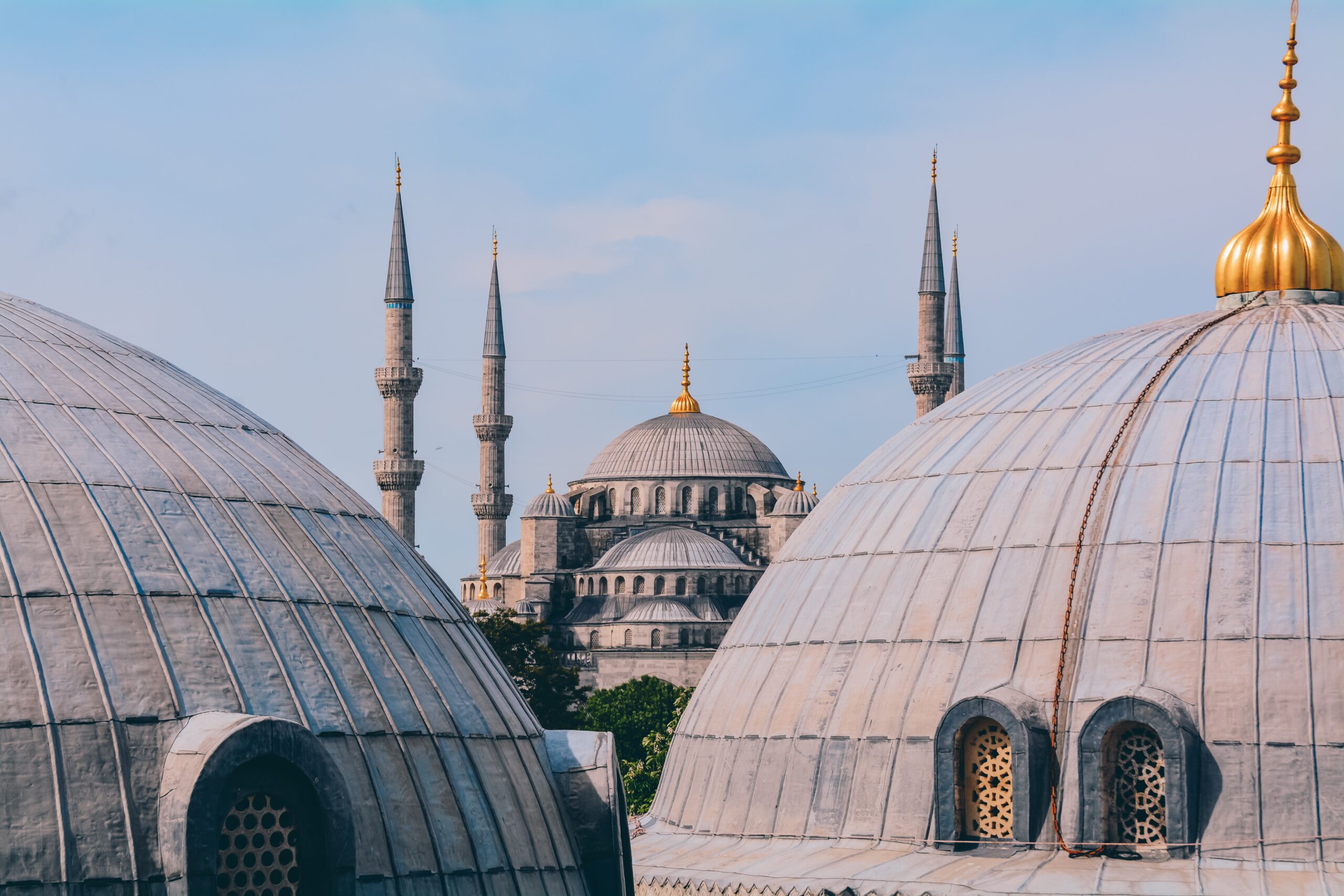 When is a museum not a museum? When it was once a cathedral and then a mosque and is now a mosque again as a politician’s attempted ace card to revive his flagging fortunes. Cihan Eroglu reports.

When asked by a crowd during a campaign for municipal elections in 2019 for Hagia Sophia to be converted into a mosque, Recep Tayyip Erdoğan, President of Turkey, answered: “First fill Sultan Ahmet Mosque, Blue Mosque, with believers, than we will see the status of Hagia Sophia.” Sultan Ahmet Mosque – or Blue Mosque as it is known by many – is the second largest mosque in Turkey and Istanbul. It is located right in front of Hagia Sophia and was the site of many ceremonial events in Ottoman history.

What Erdoğan seemed to be saying then was that Blue Mosque does not get filled to its full capacity by believers during prayer hours, so opening Hagia Sophia to the faithful would be neither necessary nor justified. All of which seemed a perfectly pragmatic and reasonable approach, given the many sensitivities surrounding this iconic building and its function.

Hagia Sophia’s conversion into a mosque from its former museum status has been a change strongly desired by the Turkish conservative wing since the 1950s, a force which is not a homogenous entity but rather a combination of nationalist and Islamist factions alongside many other groups.

Considering that Erdoğan has been in power in Turkey for 18 years (2002-2020), what was the combination of factors that made him change his stance on Hagia Sophia? And why has he seemed to have done so in the space of only a year?

To better understand his mindset on this issue it is essential to look at his popularity ratings since 2017 when he was elected as president by the public with the change of constitution.

But first a potted history of the Hagia Sophia…

The Hagia Sophia, or holy wisdom, perched at the crossroads of continents and cultures, has seen massive changes, including the name of the city where it stands, its own architectonic structure and its very purpose.

Following two earlier constructions both destroyed by fire, the present Hagia Sophia was built in 537 by the Roman Emperor Justinian the Great as the patriarchal cathedral of the Eastern Roman Imperial capital of Constantinople. As the Catholic Church in the East grew and the West declined, Eastern Christians began to see Constantinople as the new Rome, and Hagia Sophia as Christendom’s most glorious temple. The Roman empire had collapsed in the West but its successor in the East was seen to be Byzantium (Constantinople’s new name) and the Byzantine empire, with Hagia Sophia as its spiritual heart.

The big split between Western and Eastern Christians in the 11th century, leading to the establishment of what are now called the Orthodox churches in the East, then made Hagia Sophia into the great cathedral of Orthodox Christianity.

This marvellous church served this purpose until 1204 when Byzantium was sacked by the Latin Crusaders and Hagia Sophia was converted back into a Roman Catholic Cathedral. This, however, was short-lived because in1261 the Byzantines managed to retake the great City.

In 1453, the city was conquered by Sultan Mehmet II, later known as the Conqueror, and Haga Sophia was converted into a mosque to solidify his triumph. This mosque continued as a place of Muslim worship until 1935 when it was made into a museum by the founding Turkish Republic President Mustapha Kemal Ataturk through a decree from the council of ministers to further strengthen his aim of Turkish secularisation.

Under the new plan of Erdogan, the building was again converted into a mosque in  2020, although it will still serve as a museum outside praying hours.

Just as Hagia Sophia’s conversion to a museum signified Turkish secularisation efforts back in 1935, so its conversion back to a mosque ratifies Erdoğan’s counter-revolutionary views  as he tries to reposition Turkey further away from a secular state model.

Recep Tayyip Erdoğan has been a populist and a charismatic leader who has managed to win the approval of his constituency since 1994 when he was elected as Mayor of Istanbul. Ever since he has never lost an election, except for the 2019 municipal elections when he suffered a major blow by losing all but one major city (Bursa).

However, Erdoğan’s party AKP and its coalition partner MHP- Nationalist Movement Party- scored 51 percent of the general vote. When Erdoğan  was elected president in 2017, his popularity was 52.4 per cent, which parallels the vote he got during the referendum that introduced the presidential system to Turkey instead of the parliamentary system.

By February 2020, Erdoğan’s popularity had fallen to 41.9 percent according to a poll conducted by Metropoll. Just before the Covid-19 Pandemic hit Turkey. Erdoğan’s government at the start, unlike many European countries, took serious measures to limit the spread of the virus, which earned him unanimous support from Turkish people, and his popularity peaked to 57 percent.

However, as time passed his unsustainable popularity started to fall quickly. To mobilize voters and to try to reverse the decline, President Erdoğan set his eyes on Hagia Sophia.

But rather than writing a presidential decree and changing Hagia Sophia’s status personally, Erdoğan covered his tracks by a lawsuit that argued against Hagia Sophia’s preservation as a museum. On 10 July Hagia Sophia was allowed to serve as a mosque by the legal ruling by the Council of State, which was heavily influenced by Erdoğan.

The timing of his decision is not so surprising for some experts on the subject. Since 2019 the Turkish currency has lost about 16 percent of its value against the US Dollar. Unemployment and inflation have steadily increased. When Erdoğan suffered a blow in the 2019 municipal elections, he realized that his golden age was coming to an end. On top of that, with the 2020 Covid-19 pandemic, many firms have continued to face intense economic pressure.

It should be noted that participation in Turkish elections is higher than the European average. Since 1999 over 11 elections Turkish voter turnout has averaged 82.57% and conservatives on the right of the political spectrum have proven themselves very loyal Erdoğan supporters. With the eventual conversion of Hagia Sophia into a mosque, Erdoğan has consolidated his core voter base.

To stay in power, many believe Erdoğan needs to further enact economic reforms that he is not able or not willing to do. By keeping public awareness locked on symbolic power plays such as the case of Hagia Sophia, he is diverting attention from the country’s economic issues. It is, alas, a technique from the populist playbook, one that is being repeated in countries far beyond the borders of Turkey.

And by the way, in case you were wondering, Blue Mosque is still not full.