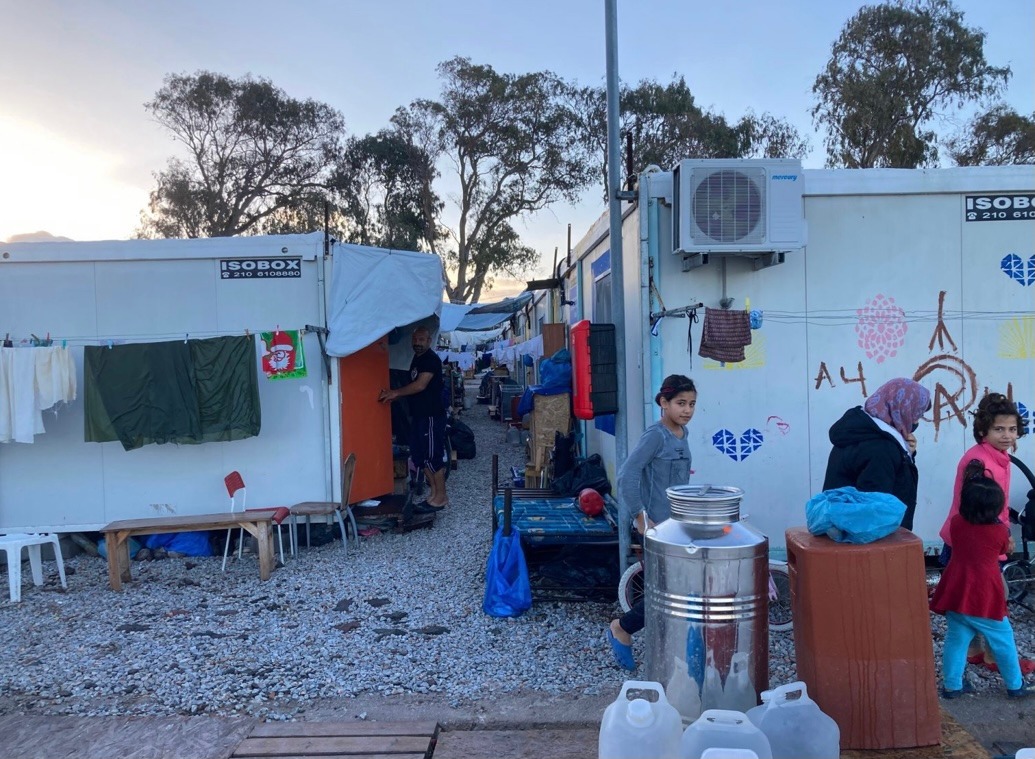 Trisha Thomas joins Pope Francis on a historic – and heart-breaking – encounter with refugees whom the world has forgotten.

Last month I flew to Lesbos to work with Associated Press (AP) colleagues covering the visit of the Pope to this Greek island.

Pope Francis has made migration a priority of his papacy. During a visit to Lesbos in 2016 he stunned the world by taking 12 migrants from the camp back with him on the Papal plane to Rome. There were rumours he might do the same on this trip, so AP boosted its coverage there.

Lesbos has a fascinating history from the ancient Greeks and their lyric poetess Sappho to the modern era as a geo-political hotspot with millions of migrants passing through from Turkey to Europe in 2015 and 2016.

Flying in from Athens in the rain, Lesbos appeared unexpectedly large and verdant below.  It is the second biggest Greek island after Crete and has 11 million olive trees, olives being its principal export.

The romantic poems about women written by poetess Sappho led to the term Lesbian, and every year thousands of women descend on her birthplace, Eressos, for the annual Sappho Women Festival.

As someone who lives in Rome, I have been brain-washed into thinking that Italian food is superior to all else and sometimes forget the fabulous food to be found in other nations. On Lesbos the AP team gorged on Gozleme (fried dough with mizithra cheese), Ladotyri (local cheese made from sheep’s milk), fried Amanites (local mushrooms), eggplant with beef and feta, fried feta with honey and black sesame wrapped in puff pastry sheet, fried calamari, and tzatziki with avocado.

I was also struck from the air and from the land at how close Lesbos is to Turkey. To be precise, depending on where you cross, it is 10-23 kilometers (6-14 miles). It is visible from the small port town of Mytilene where I stayed and our local cameraman, Vangelis Papantonis, told me there were three or four ferries daily to Turkey before Covid, and in the summer months tens of thousands of Turkish visitors every day. That has all come to a halt, and when I was there the port was lined with Greek Coast Guard and Frontex ships.

The migrants I spoke to said they crossed over from Turkey in the pitch-black dark of night on smugglers’ boats on a journey that took roughly two hours.

There are many fewer migrants making that journey these days because in 2016 the European Union signed an agreement with Turkey giving six billion euros in exchange for a block on the thousands of migrants crossing into Greece.

At the time Lesbos was overwhelmed by tens of thousands of migrants who were living in desperate conditions in camps on the island. At one point the population in the Moria Refugee Camp rose to over 20,000 people. In 2020, a fire destroyed the camp.

This time the Pope visited the Mavrovouni camp where roughly 2,200 asylum-seekers live in containers and tents provided by the UNHCR.

I entered the camp with my colleague Helena Alves early in the morning following a pebbled road that runs along the shore, the sea with the view out towards Turkey on one side, the migrants’ containers on the other. There were clotheslines running between the containers with laundry hanging on them, and wooden carts with large plastic water jugs.

Later in the day I would be struck by the number of children. They were everywhere, newborns in their mother’s arms, toddlers playing on the ground, a group of six Afghan girls (all under 10) zipping around on old bicycles. The demographics of the camp appeared to be the opposite of Europe where children have become a rarity.

We set up our equipment in the tent on a hillside looking out to the sea and the camp. The migrants chosen to participate in the ceremony began to arrive. We quickly found Christian Tango Mukaya and his two daughters, Mercene and Trisila, whom Helena and our local cameraman Vangelis had interviewed the day before.

The Mukaya family left their home in Kinshasa in the Democratic Republic of Congo in September 2020 and made their way to Turkey where they spent three months before paying to get five places on the boat to Lesbos. On a late November night, Christian and his older daughters, Mercene, eight, and Triscila, six, scrambled onto a boat headed for Lesbos in the dark.

It wasn’t until the boat arrived hours later that they realized his wife, Tricha, and younger daughter, Abigael, were not with them.  They have not had news of them since.

Christian has asked for help from the Red Cross to find his wife but without any luck. The three now live in a container in the Mavrovouni camp as they wait to see what happens with their request for asylum and hope they will be reunited with their loved ones.

I spoke to another asylum-seeker from the DRC, Erice Kiaku, who was there with her husband and two children, including her two-year-old son Guilain: “We have a lot of problems here as refugees,” she said, “a lot of suffering. I am vulnerable, I have no papers, I am here with my family. We are neglected, we have no documents. I had my baby here. He was born here but he has no papers. The arrival of the Pope here makes us feel blessed because we hope the Pope will take us with him because here we suffer.”

Pope Francis began his visit walking through the camp between the containers hugging migrants, kissing babies, taking selfies with people. He accepted notes and listened when people tried to talk to him. He did not wear a mask. The Pope is 84 and has only part of a lung on one side due to a childhood illness, but he clearly is not bothered by concerns about Covid.

When he entered the tent a group of African migrants burst into song. I wiggled my way between the rows to get this close-up view with my osmo camera.

Sometimes I think this Pope can give boring speeches during which he will sometimes ad-lib trying, it seems, to be more like a friendly parish priest than the leader of the world’s 1.3 billion Catholics, telling anecdotes and appearing to be a common guy. It doesn’t always work. But this time I found his speech to be powerful and courageous, reaching out directly to the asylum-seekers in front of him while also chiding the leaders of Europe and the world to do more to help them.

“I am here once again, to meet you and to assure you of my closeness,” he began. “I am here to see your faces and look into your eyes. Eyes full of fear and expectancy, eyes that have seen violence and poverty, eyes streaked by too many tears.”

He went on, “I ask every man and woman, all of us, to overcome the paralysis of fear, the indifference that kills, the cynical disregard that nonchalantly condemns to death those on the margins!”

“It is distressing to hear of proposals that common funds be used to build walls as a solution. To be sure, we can appreciate people’s fears and insecurities, the difficulties and dangers involved, and the general sense of fatigue and frustration, exacerbated by the economic and pandemic crises. Yet problems are not resolved and coexistence improved by building walls higher,” he said.

“The Mediterranean, which for millennia has brought different peoples and distant lands together, is now becoming a grim cemetery without tombstones. This great basin of water, the cradle of so many civilizations, now looks like a mirror of death. Let us not let our sea (mare nostrum) be transformed into a desolate sea of death (mare mortuum). Let us not allow this place of encounter to become a theatre of conflict. Let us not permit this ‘sea of memories’ to be transformed into a ‘sea of forgetfulness’. Please, let us stop this shipwreck of civilization!”

After the Pope left, my colleague, Lisbon-based video-journalist Helena Alves and I wandered around the camp speaking to migrants.

Manan Al Belal, a 23-year-old from Syria with a two-month-old baby in her arms, said she has been in the camp for five years and is desperate for help. She has three other children. She asked me over and over again to tell her story so someone would do something to get her and her family out of the camp. “Help me, please,” she begged. “Germany, Italy, no problem, just here, no. Go!”

A group of Somali women gathered around us telling of their frustration at being stuck in the camp.  An Afghan couple with children asked us to tell their story on TV and get someone to help them.

It was hard knowing that our reporting would not make a difference to their individual lives.

Several times we had to cut off people who wanted to describe their experiences in great detail, show us their containers, or take us to a person in a wheel-chair, or an elderly relative. But we needed to finish the interviews and go file our story.

One of the few people who seemed resigned to his plight was 83-year-old Chiraghali Tawakilli from Afghanistan. He proudly showed us the rosary that the Pope had given him and with the help of his daughter who translated into English he said, “Today, I saw the Pope. I am really happy. Thank you so much.”

I want to end with this little video I posted on Instagram of Helena Alves showing Mercene and Trisila Mukaya a video report we did on them while waiting for Pope Francis. If anyone has any idea of how to help these lovely girls find their mother, please let me know.

This is a slightly edited version of an article which first appeared on this blog. For the original version of the article, see here. It is re-published in Adamah with the author’s permission. The cover photo of this piece is also by Trisha Thomas, December 5, 2021. For the Pope’s full words at the refugee camp in Lesbos, see here. For his meeting with migrants in Cyprus, see here.

Know any young writers aged between 18 and 28? Invite them to enter our competition for the chance to win a £200 cash prize and a private journalism masterclass! Click here to find out more.

Trisha Thomas moved to Rome in 1993 and has been working for Associated Press TV News since 1994.