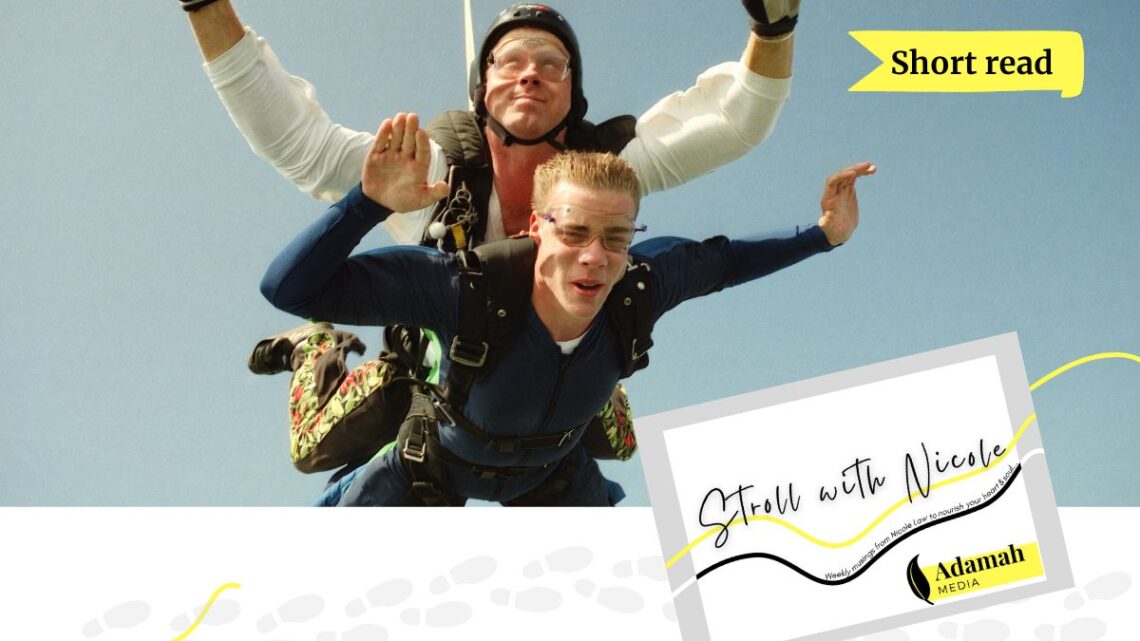 I was intrigued recently by a metaphor used by the American priest and writer Richard Rohr. He employs the metaphor ‘Falling upwards’ as the title of a book in which he describes life as being split essentially into two halves.

The first half, he says, involves building a strong ‘container’ or sense of identity. And looking around at various young people I know, it seems many of us are currently at this stage. We are carving out a career, personal relationships and broadly our sense of self. It’s termed the ‘hustle culture’.

In this first half of life, we cannot see any kind of failure as even possible, much less as necessary or good.

We avoid failure at all costs and feel the sting of shame when we fail to measure up to standards.

It’s there in the language we use – ‘key performance indicators’, ‘expected potential’, ‘meeting targets’. We try so desperately to build up the structure of the house, adding an extra wing here, breaking down another wall there to expand the room, that we sometimes forget what actually goes into the house itself.

I confess I have been guilty of this too, being overly concerned about what my life looks like to the outsider. Am I meeting my fitness goals? Am I perceived as an effective worker? Am I a good enough friend? What do the things I wear or activities I engage in say about me?

The fixation on the first half of life is external perception and an unhealthy preoccupation with the appearance rather than the substance of things.

Over the last few years, however, I’ve had a brief taste of what the second half of life entails, which Rohr describes as discovering what the container itself is meant to hold.

This has involved re-evaluating my priorities and life goals and learning from Rohr’s instruction: “The only way up is the way down.” Rohr reminds us of something very important: “The supposed achievements of the first half of life have to fall apart and to show themselves to be wanting in some way.”

That is, we need to realise that much of what we take pride in lacks true depth and meaning and come to terms with the superficiality of so many of our concerns. Our proud obsession with the appearance of our lives – that external container – hinders us from discovering the ‘why’ of our existence.

Like the biblical episode of Jacob wrestling with the angel, many of us are in a struggle phase or as I like to call it the ‘struggle bus’. We try too hard to keep various areas of our lives in balance when, in truth, accessing our human nature also means letting ourselves fail and die to our desires.

Rohr talks about the difference between ‘amateurs’ and ‘elders’. Amateurs, typically young people, launch in with a deficit of knowledge and an excess of confidence. Elders are no less interested in life’s burning topics but are more realistic about what they can achieve.

I sometimes wonder whether I’m a little bit of both. The ‘elders’ in my life are not necessarily older than me. Rather, they have a slightly different approach to life.

They understand it is far better to let go of a grudge against someone than to hold it in our hearts where it festers like an open wound. They know when it’s better to place a boundary between work and life and to spend time with loved ones instead of killing ourselves to meet a deadline.

The ‘elders’ know that sometimes we must lose the smaller battles to win the bigger war.

There is a sense of calm and knowing which they inspire and it stems not only from having experienced more of life, but from their willingness to take the rough and tumble of daily living in their stride.

I find myself leaning more towards this tendency lately as well. Learning to let things be as they are. Learning that true depth of relationship requires sacrifice. Accepting those necessary wounds which are the pathway to greater mental and emotional maturity.

I have learned to sit back more, to temper my passions and to ride the steady current. There is no shame in ‘regressing’ a little or straying slightly off course from time to time. It does take some getting used to, but perhaps we all need to learn to ‘fall upwards’ on occasions.