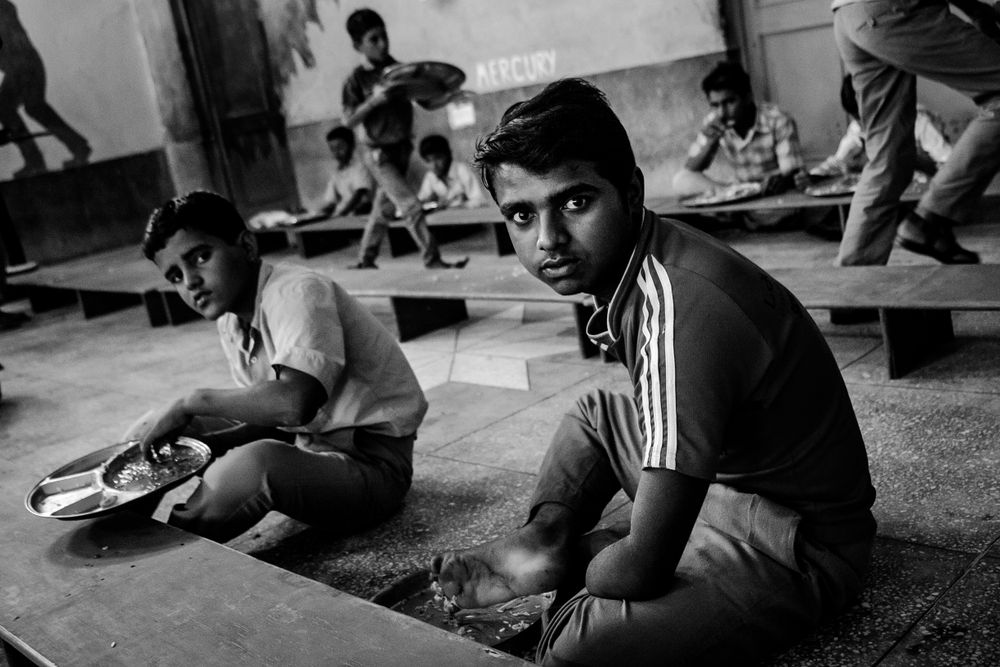 Adonna Francis describes a photo essay which helps us see beyond children’s disability to discover instead their ability.

When encountering someone’s disability for the first time it can seem that the whole world wants to stop and stare. To impose an unwavering gaze that reminds a person how painfully different they appear to others.

Or it can be that onlookers take their first curious look but turn away all too quickly. Briefly glancing and then sharply diverting their gaze, too afraid of being caught staring, too afraid to make eye contact and to form a connection.

But what if we all had a second chance, a second opportunity to see before us the people who catch our attention? To engage with the people looking back at us? Through a more gentle, respectful and steady lens, what might we see of each other? What could we learn?

Kabilan Raviraj’s photographs of children with physical disabilities, residing at a school supported by the Indiability foundation in Rajasthan, serve to give the world just such an opportunity. His black and white images take us on a journey through a seemingly ordinary public school and student hall of residence.

We are lulled by the grey tones to calmly ‘walk’ and peer through. While in the bright light of day each student’s disability would have been more apparent, the absence of colour in each photo almost camouflages the fact that there are hands and legs of children missing. So initially we are not distracted by the deformity of limbs and instead engage with the young faces on display.

The photo of a young boy sitting at his desk, reading his textbook and writing his answer in a jotter is a familiar scene. The importance of childhood education echoes throughout the frame as his school friends mirror similar poses of concentration and study in the background.

But he and his friends are not the only ones learning valuable lessons. As we the audience follow the young boy’s studious gaze we are led to see that his left arm rests on the desk and we can observe that his left hand is missing. As though it had been amputated …

Before there is time to contemplate this sudden difference further, the boy’s own gaze continues to draw our attention deeper, setting our sights on his ultimate focus, his school books.

Like the children engrossed in their studies, we too are encouraged to shift our focus and to learn.

Not to linger too long on their disfigurement. Not to fall too deeply into shock, pity or concern. But rather to learn from the resilience and strength of the children we see before us. How each child is overcoming his or her physical challenges through intellectual growth and the cultivation of skills and talents.

Through Kabilan’s photographs, we are also reminded of the importance of friendship, community and connectedness for children who are overcoming not just the practical disadvantages of having a physical disability, but also the accompanying stigma which can mean that they are socially excluded and even abandoned by their families.

The founders of Indiability highlight how in India ‘traditions and cultural taboos mean that physically disabled people are considered inauspicious’. There can be the perception that a person’s disability is a punishment for ‘misdeeds’, carried out during a past life, or by their parents.

Even when a child has clearly acquired his or her physical impairment following an infection, such as polio, or following a traumatic accident, relatives might still feel shame and seek to keep the child hidden away from the wider community and society for fear of what others may say or think.

With this awareness in mind, Kabilan’s next photo becomes especially meaningful. Initially we see there are four young boys, part of a friendship group, leaning on each other like brothers, as they pose together. They show no hint of being burdened by any stigma, as they look confidently into the camera, their gazes steady and curious.

However, as we spend a few more moments returning their stare, our attention is then naturally drawn to the silhouette of a smaller boy standing just a little behind them. It’s as though we are looking back into each of their pasts, to a time before they attended the school and formed their friendships. And as we ‘look back’ the contrast is stark.

The smaller boy’s face is hidden from the light, hidden from our gaze, and he remains alone, leaning against the door frame, clearly hesitant to come forward and say hello. It may be that he is unable to cross the length of the connecting corridor, because his wheelchair, which can be seen just behind, is unable to fit through.

But it also seems painfully possible that the young boy is used to living in the shadows, somewhat hidden and out of sight, due to the stigma of having a disability.

That is until he can be offered the chance to join in, like other children his age. To attend school, play sports, and make friends.

The significance of friendship, belonging and education resonate strongly throughout the black and white images of Kabilan’s photo-journal. Each photograph provides a thought-provoking and heart-warming reflection of the lives of the children that the artist-traveller has met. And the world is offered a second chance to observe differently their physical impairments.

To look a little deeper and truly see how a group of young people, despite their physical afflictions, are very much capable of living, learning, playing and ultimately thriving together…

Dr Adonna Francis is a London based General Practitioner who loves working with families. In her spare time, she also enjoys putting pen to paper to reflect on the big questions of life that come her way (be they around medicine or her Catholic spirituality). Adonna is especially passionate about 'bridging the gap' and finding common ground not just between different ideas and perspectives, but also between people of different walks of life!