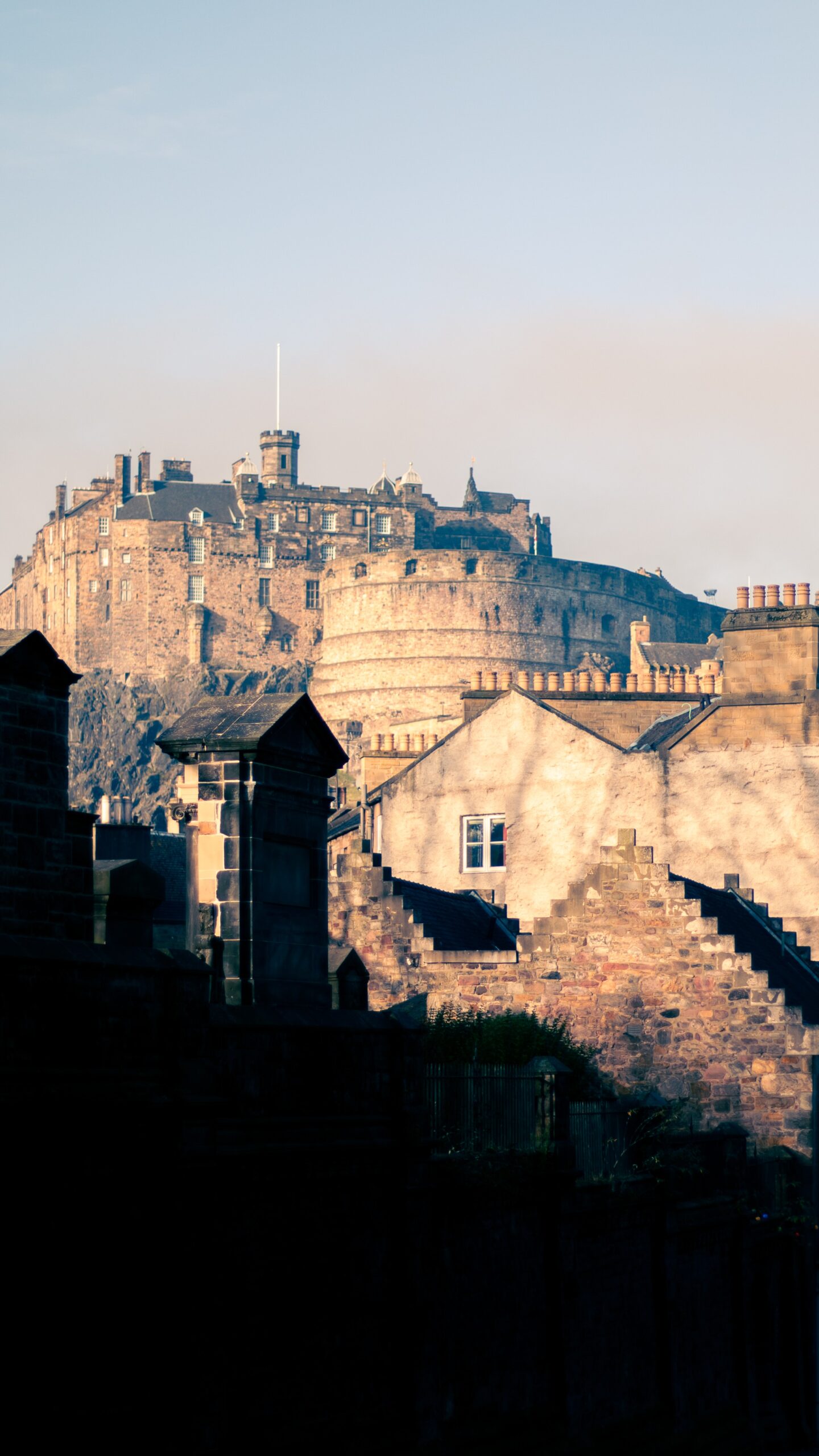 Adam Brocklehurst recalls a moment of consolation in the galleries of Edinburgh.

Edinburgh, the ‘Athens of the North’, is a place I find myself returning to again and again.

It wears its long, rich plaid of history with pride. Through the centuries it has been the scene of war, bloodshed and political turmoil. It has also been the birthplace of great philosophical ideas, of science and of revolutionary economic theory. Yet it in no way feels precious or preserved, like an exhibit behind glass. It continues to be a living, evolving, city.

The character of Edinburgh is reflected in its topography, with its sweeping open vistas and panoramic views, and its claustrophobic dark passages and unexpected, sunlit courtyards. It’s a place where the tension between light and darkness is profoundly felt.

And for such a relatively small city it punches way above its weight with regards to the arts. The Edinburgh International Festival and Fringe, a showcase for the world’s performing arts, draws hundreds of thousands of visitors each year into the city’s narrow streets (at least prior to Covid-19), and its many art galleries are packed to the rafters with world class masterpieces – Botticelli, Vermeer, El Greco and many more – sharing wall space alongside its own inimitable school of art.

It’s a place that seeds great creativity. J. K. Rowling began the first of her Harry Potter books here (in a coffee shop), and the reader can sense the influence of the gothic spires and magical atmosphere of Edinburgh in them. A further facet of the city is shown in the dark and provocative early films of the renowned English director Danny Boyle.

And all this and more is why I came here, so I can lose myself in the city’s beauty, and its history and associations.

It was nearing two years since my older sister Melanie had died suddenly, taken from us by a thrombosis one glorious warm July evening as I holidayed in the Norfolk countryside. The pain of her death still felt like a clenched fist in my chest.

I had returned to Edinburgh to process some of my grief in a non-destructive manner and walking amongst beauty is often conducive to healing.

Entering the long flat Venetian Gothic façade of the National Portrait Gallery of Scotland, with its four outsized crocketed turrets and complex polychromatic work, I reflected on how it would be more at home in Northern Italy than this cold, rather exposed, corner of Britain.

I must admit to having prior experience of these types of institutions, created as repositories for the portraits of the great and the good, and was steeling myself for room after room of severe and dour Victoriana, and so far, my misgivings hadn’t been misplaced.

Amongst the dark portraits of long-dead generals and marble busts of forgotten political leaders, a single canvas stood out. From a distance it was a splash of scarlet and black barely contained in a splendid gold frame. I didn’t immediately recognise the subject, but I knew without question who the artist was.

Here of all places, I had stumbled across a portrait by non-other than the master of Russian Impressionism, Valentin Serov, an artist considered a genius in his own country, but little known outside it.

Serov was born into the cosmopolitan haute bourgeoisie of mid-19th century St Petersburg. His father was the composer Alexander Serov, a famed music critic, and his German-Jewish mother, Valentina, was also a musician.

His formative training was in the school of the renowned Ukrainian realist painter, Ilya Repin. Repin was an academic painter of large scale historical canvases often with a strong social or nationalistic flavour. His aim seemed to be to get to the core of the Russian psyche, to capture the reality of their lived experience, in a way that didn’t shrink from exploring the darker aspects.

The Russian Realists had developed as a movement in response to the domestic turmoil in their homeland in the 1840s. This period of revolution coincided with the end of serfdom and the nascent erosion of the formal caste system of the nobility following  the general European revolt against progress and the heavy industrialisation of a formally agrarian world. All this had its roots in the Romantic period of the previous decades.

Serov entered the St Petersburg Academy of Arts in 1880 and drew largely on the existing artistic milieu for his inspiration. Many of his early works, while highly competent, show his heavy reliance on the style of his tutors.

Girl with Peaches, completed in 1887 and the first work in Serov’s mature style, has a freshness and clarity that feels more French than Russian, and perhaps owes a debt to Manet the proto-impressionist.

There is éclat to his broad brushstrokes, a precision, amidst the deft loose strokes, that seems unique to him, perhaps drawn from the quality of the light in Russia. Colour, through Serov’s lenses, was never better captured.

But it was through the medium of portraiture that Serov would make his name.

Outside of the anglophone world, portrait painting was considered second rate, not in the same league as the great canvases that were the mainstay of exhibitions and the academy in the late 19th century.

Valentin Serov applied to the portrait the kind of attention that had previously been reserved for genre painting in Russia, he imbued his work with psychological meaning and symbolism, and in so-doing, became the poster boy for the Russian avant-garde.

And he drew his influences not only from Russian realism and impressionism, but also from the Viennese Secessionists, the great flowering of sinuous and naturalistic art known in Britain as Art Nouveau.

His 1900 Portrait of the Princess Zenaida Yusupova, a woman as famous for her beauty as she was for her legendary personal fortune, is widely considered his masterpiece.

The eponymous Princess is casually seated on a chintz-covered couch, in a black and white silk taffeta evening gown, with her small white dog at her side. She faces the observer, her large blue eyes resting quizzically upon us, perhaps revealing a touch of resignation.

Serov’s handling of the colour in the painting is extraordinary, a magnum opus in whites, blacks and gold. Such a pale composition could very easily have been rendered dull or repetitive, yet this is anything but.

Here Serov is skilfully employing a technique utilised by the Flemish masters of the 15th and 16th centuries (see Pieter Breughel the Elder’s Winter Landscape with Ice-skaters and Bird trap). The Flemish school used blacks, browns and earth tones in their winter landscapes, to highlight the luminosity of the snow, and the peculiar effect of winter light.

The white of the silk is contrasted with blocks of black and browns, the princess’s bodice, the eyes of her Pomeranian dog, her elegant slipper supported on its stool. He uses flashes of black across the fabric. It makes the gown pop, the silk shimmers and dances with movement, she looks poised to move at any second. A real, curvaceous woman, a mother and wife, rather than a gorgeous, useless ornament only meant to be admired from a distance.

It is, in my opinion, more successful, as an essay in white, than the cadaverous pallor of James Abbot McNeill Whistler’s better-known 1862 foray into colour, A Symphony in White.

Perhaps the most obvious nod to the Secessionists is his handling of the Princesses face; not only is it central to his composition, turned laconically, rather than straight facing, but it is highly coloured, even shockingly so, in relation to the surrounding subdued palette.

And this is not a Western aristocratic face, far removed from the world and the sun. Her’s is a real face, a Russian face, it harks back to the marauding Turkic and Mongol origins of the Princess’s powerful nomadic ancestors, a people who lived amongst their serfs, who were no strangers to the outdoors. In her face Serov is capturing the very last gasp of feudalism, the symbiotic relationship between the elite and the land.

One’s mind is drawn the gold of the icons of the Orthodox mother church, for she has the powerful inscrutability of a Madonna rendered in flat one dimension, she is Mother Russia.

This is a symbiosis of eternal Russia, realism, impressionism, secessionism, to say something profoundly political and nationalistic, at a time when the ancien régime was just about to fall.

Like his master Repin he is attempting to tap the core of what it means to be Russian, in a way that goes beyond mere class, beyond the obvious and the clichéd.

Back in Edinburgh, Serov’s portrait of Tsar Nicolas II is no less striking, a beautiful portrait of a handsome man, visually appealing, though not quite on a par with the portrait of his kinswoman (the Tsar’s niece Irina was married to the Princess’s son Felix).

Still, it is an image thick with connotations. It too was painted in the dying years of Imperial Russia, a few years before Serov’s premature death aged 46, and the Tsar’s bloody martyrdom in the not-too-distant future. It is a painting that speaks eloquently of the death of the old world and the painful birth of a new order.

And if the painting of Princess Zenaida suggests the final glorious blaze of imperial aristocratic Russia, the warning colours, red and black, in the portrait of Tsar Nicholas II give another message: the old order has already come to an end and is merely awaiting its death-blow.

As I left the gallery I wondered at the power of serendipity, and of the bittersweet quality of a moment of unexpected pleasure brought to me during a time of great personal pain.

And in retrospect, I realised that life is very much like a Serov canvas, white with highlights of black, and it is those moments of darkness that make everything else so vivid.

That this epiphany was revealed to me in a city that fluctuates between the sun and the shadows, between the old and new, seemed somehow providential.