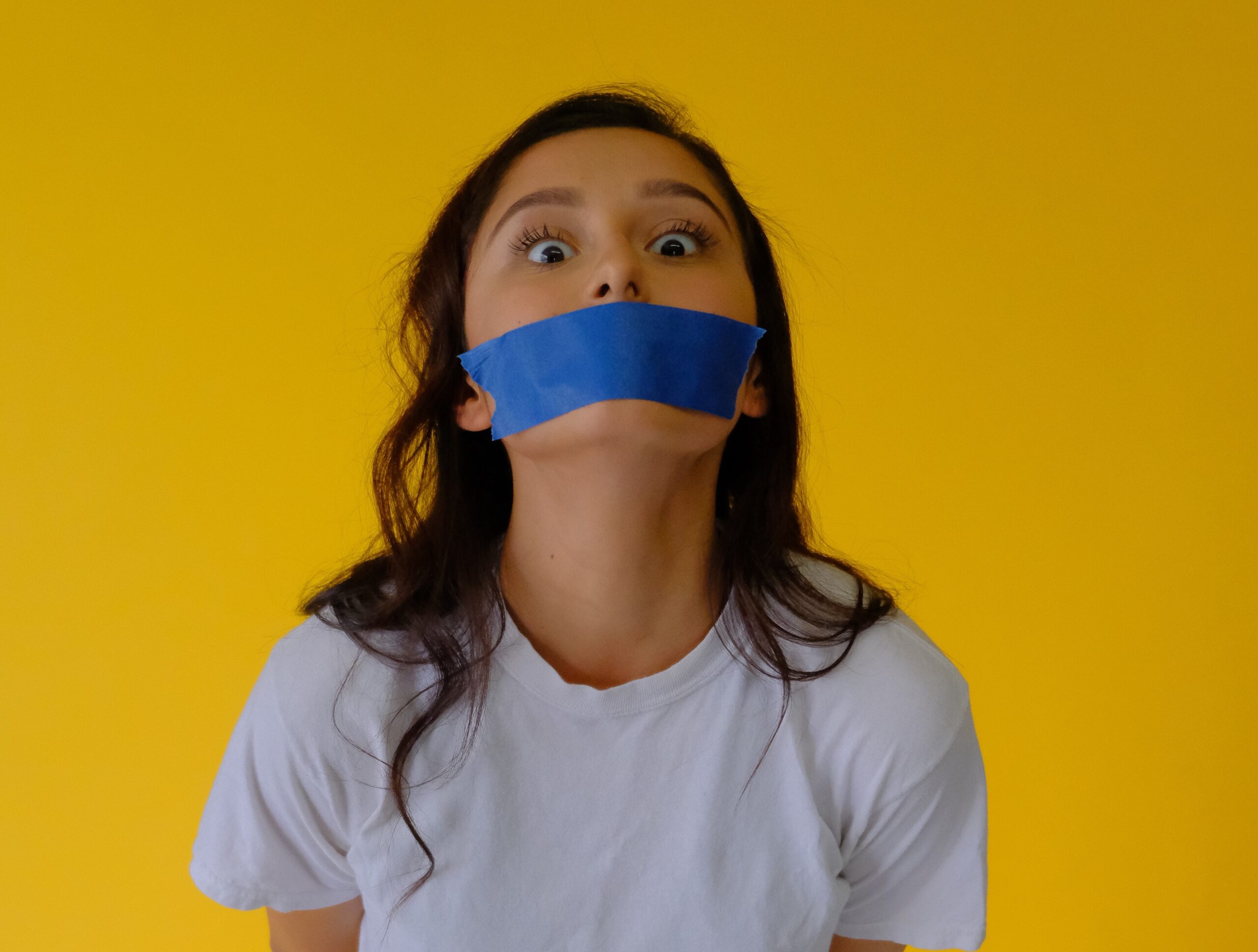 Edward Kendall urges an examination of conscience to establish whether we are really as open-minded as we like to think we are.

Freedom of speech is one of those principles that almost all of us sign up to but few of us truly respect. Article 10 of the European Convention on Human Rights (to which – despite Brexit – the UK remains a signatory) stipulates that every citizen ‘has the right to freedom of expression’ and that this right ‘shall include freedom to hold opinions and to receive and impart information and ideas without interference by public authority and regardless of frontiers’.

In totalitarian regimes the world over we have become accustomed to seeing this liberty shamelessly violated by civil authorities, whereas this violation is far less common in liberal democracies. However, in the Western world it is not always ‘interference by public authority’ that is the major threat. Increasingly we are seeing private corporations and university campuses take it upon themselves to act as public censors, stifling opinion and cancelling events, either due to mass outrage, or because they deem certain speakers or events to be beyond the pale.

We have also seen the policing of free speech by public authorities and social media giants, on the spurious grounds of a ‘hate crime’ being committed or somebody somewhere being offended.

However well-intentioned the advocates of such censorship might be, the right to free speech is not safe when there is the desire from on high to prevent offence being given or taken.

As a result, we have in the UK a form of censorship that is certainly different, but in many ways no less deplorable than might be found in China or Myanmar, even though British citizens clearly do not risk finding themselves in a re-education camp or being murdered by state apparatchiks (a far more likely sanction is losing your job and/or being ostracised in private and public life).

The rise of free speech and other associated liberties is often credited to the so-called Enlightenment, but it has a much longer history in the development of thought. For instance, medieval theologian St Thomas Aquinas gave birth to a notion of autonomy when he wrote in his Summa Theologica: “Human laws do not forbid all vices, from which the virtuous abstain, but only the more grievous vices … without the prohibition of which human society could not be maintained; thus human law prohibits murder, theft and the like” (ST I-II, 96.2).

In other words, only those actions which do not impact uniquely the private individual concerned but also cause serious social harm should be the subject of prohibitive laws.

On its own this statement is not enough to preserve free speech (it leaves open the question as to what constitutes a grievous vice without which ‘human society could not be maintained’), but it does provide a basis from which an argument for freedom of speech can be built.

If one were to tie the notion of grievous vice to that of causing material damage, for example, then we would be a long way along the path of preserving free speech, as speech ipso facto does not cause material damage. Or more simply, speech alone is far less serious than material damage, which is when, and only when, the law should intervene; to stop the damage not the speech.

The argument that Aquinas makes for autonomy is more concerned with the limitations of the state, but another argument is the one made based on humanity’s search for truth.

This latter argument was put forward quite neatly by Pope John Paul II, who argued that everyone has ‘the right to develop one’s intelligence and freedom in seeking and knowing the truth’ (Centesimus Annus, 47) and that this is one of the most important human rights, central as it is to man’s search for meaning.

Implicit within this mandate to seek truth is the right to search for truth by seeking and testing a variety of different positions and opinions on what constitutes the truth, but this is not possible unless we have the freedom to put forward opinions, make rebuttals, and read dissenting views.

Therefore, Victorian philosopher John Stuart Mill, in his celebrated essay ‘On Liberty’, argued as follows: “Every opinion which embodies somewhat of the portion of truth … ought to be considered precious”, even if it is blended with what he called ‘error and confusion’. This is because truth’s ‘collision with error’ provides a clearer perception and livelier impression’ of truth.

This argument for free speech based on our right to seek the truth is rooted in the idea that truth itself is the only binding authority on our conscience.

This being so, it then follows that no civil authority or human power can usurp that authority. Only truth is infallible and, therefore, to prevent free speech on the grounds of holding the monopoly of knowledge is to assume infallibility.

That might sound like a ridiculous notion, but we have seen examples recently in the UK which come close to it, for example with the broadcasting regulator Ofcom policing opinions which didn’t toe the government line regarding the response to the Covid pandemic on the basis that they did not want to undermine public trust in public authorities and the scientific evidence which was being used to support such public policy (although there were some qualified experts who didn’t agree with such policy).

Mill, for one, took the view that we can ‘never be sure that the opinion we are endeavouring to stifle is a false opinion; and if we were sure, stifling it would be an evil still’.

With freedom, however, comes responsibility and this requires us to make good use of our right to speak freely. If we have this right, then we should use it well. The necessary establishment of freedom of speech is merely the starting point and once established we need to build a public discourse that works towards truth, using language and rhetoric that is honest but also aimed towards the common good.

This means raising our political and news discourse above the tit-for-tat detraction that often passes for debate and properly engaging in the substance of the matter being debated.

We need free speech, but we also need good speech.

One of the most dispiriting elements of today’s public discourse is the use of ad hominem attacks on people’s character based on their opinions or even on comments made long ago. We have seen it most recently with the Deputy Leader of the UK Labour Party Angela Rayner describing a whole political party leadership as ‘a bunch of scum’.

This sort of rhetoric (which is nothing less than the hurling of insults and abuse) goes hand in hand with the development of cancel culture – a stifling censorship of all opinions that are perceived to be unacceptable and the harassment of all those who hold such opinions (either through attacks in the press, via social media, the threat of dismissal, or disciplining by employers or universities and other such bullying tactics).

Not only is the ad hominem attack a logical fallacy (it fails to engage in the substance of the debate and thus adds nothing to it), but it is also a grave attack on the dignity and wellbeing of an individual.

Try to picture in your mind somebody who spouts a well-intentioned but unpopular opinion subsequently facing sanctions from society and/or their employer because of it. Perhaps he or she has a dependent family too, who also will suffer from the pressure being exerted on this harassed person. Not only is the individual’s right to speak freely being violated by such actions, but so is their right to socio-economic well-being and to reputation.

This is why it is imperative for lawmakers to take notice and, if they are serious about protecting free speech, implement legislation which will protect the right of employees to speak freely as private citizens on any topic without fear of repercussion.

Furthermore, if the cancelling of all dissenting opinions continues unabated, then those voices will not simply disappear – they will fester and get angrier because of the unjust treatment that has been meted out to them.

This does not bode well for the discord and harmony of civil society.

So why do people respond to opinions they abhor in such a rash and uncharitable fashion? Is it simply because they have lost the argument and are now desperately resorting to throwing insults?

Perhaps. The 17th century bishop and saint Francis de Sales, in his spiritual classic Introduction to the Devout Life, points out that many people ‘make a habit of rash judgement merely because they like to play the philosopher and probe into men’s moods and morals as a way of showing their own keen intelligence’. Others, he writes, ‘judge out of passion. They always think well of things they love and ill of those they dislike’.

The latter tendency is all too commonplace in current public discourse and it is certainly the case that if you dare to  express an unfashionable opinion you will soon find yourself facing all sorts of unfair charges against your character.

So what is the remedy? Perhaps it might simply be charity. How does charity work in dealing with others, especially with those with whom we vehemently disagree?

It is always very easy to get riled up about opinions we hear and to make rash judgements about the people who express them. Perhaps next time, whenever you feel that anger about an opinion rising up within you, remember the law of charity and implement it by giving the offending party the benefit of the doubt and a listening ear.

You may well disagree with the opinions you hear (and you are entitled to do so), but that doesn’t dispense you from the obligation to listen to the person and give them the benefit of the doubt as to their character and intentions.

Ultimately, it comes down to the golden rule – if we wish people to abstain from hurling abuse at us and respect our right to hold an opinion, then we must afford that same privilege to everyone else – without exception.

We are all equal in dignity and rights before the law and if the notions of the rule of law and free speech are to be given any currency, then the onus is on us to defend people’s right to spout unpopular and even abhorrent opinions, even if there should only be one person on the planet espousing them.

We would do well to listen to the words of John Milton, who, when making his celebrated Areopagitica speech, said: “Give me the liberty to know, to utter, and to argue freely according to conscience, above all liberties.”