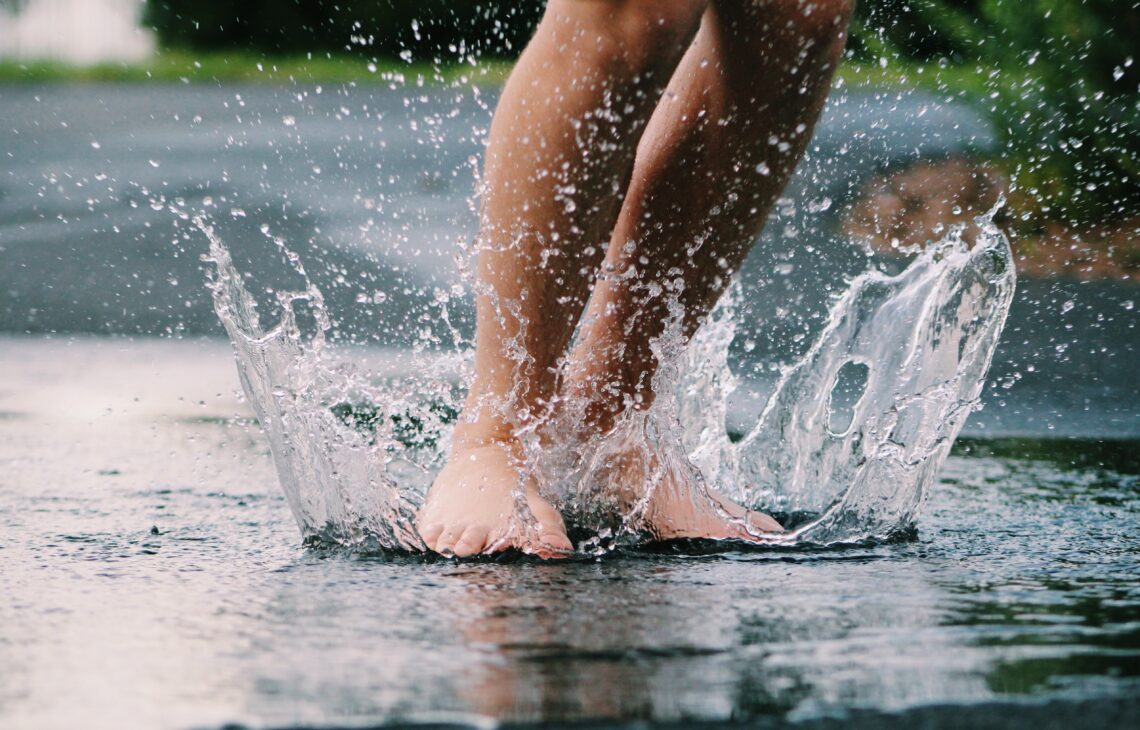 American-in-Italy Monica Sharp takes a personal view of the climate emergency from the guilty safety of her air-conditioned room.

I’m not gonna lie. When I moved back to Oklahoma from Seattle in 2004, the weather was near the top of my list of things to dread. Sweltering summers. Overactive air conditioning. Winter ice storms. Wind chills below freezing. Flash floods. Drought.

And that’s before we even get to straight-line winds, tornados, derechos and steel reinforced tornado shelters below ground, and our roommates the crickets and daddy longlegs, who were never too pleased to see us all pile in.

“If humans lived in Oklahoma for another million years, we would reverse-evolve into reptiles just to survive this place”, I told a friend once. The weather in Oklahoma is a mute adversary. It demanded that we always be alert, watchful. Weather-alert.

So when, after my bonus dozen years in Oklahoma with my husband Jason (with plenty of breaks for European travel and assignments), it came time to leave, I was relieved. As Jason said, “In this state, if you’re not in an active shooter situation, the weather is trying to kill you.” Or for non-Americans, if you’re not the murderer, the weather is. The weather was both a push and a pull factor.

In the summer of 2011, our son Victor was a newborn, having arrived one month early on Memorial Day weekend (I remember this because I was counting my medical leave against the universal holiday entitlement, what madness!) That summer Oklahoma broke heat records that still stand today.

Jason and I were shut in our house with a wailing newborn. The air conditioning struggled to keep pace. The mercury dropped below 100 degrees Fahrenheit only after 10 or 11 at night. A derecho did in fact sweep through in mid-June, knocking out our power for days, the trees in Eastwood Park across the street splitting and screeching all night long and into the next day as they broke and fell.

We took shelter at my parents’ house an hour away and at friends’ houses whose power returned before ours did. It was a miserable summer. I couldn’t even take Victor out for walks in his stroller. He would have crumpled like a leaf in the unbearable heat between 7am and 11pm.

So, out of desperation, Jason and I scheduled two weeks in Santa Fe, at 5,000 feet, where at least the nights would offer cool air, and it was glorious indeed. We drove there, stopping every two hours to nurse baby Vic, and were so relieved to be in fresh air, the fluttering aspens.

We went after that to the farthest corners of the Pacific Northwest with our new baby and looked at each other thinking, what were we doing back there in the inferno?

In manageable temperatures, parenting a newborn was actually possible. Tempers cooled with the temperature drop. We started feeling sane again.

Six years ago we moved to Florence, Italy, where the weather was positively dreamy. No deadly winds. No tornado shelters. The summers were warm but manageable if you took some hints from the locals: manage your shutters and shades, cool drinks, use the morning and evening hours. Barely any winter windchill.

No wind could weave its way through the mazes of those medieval buildings. No ice storms, scant snow. The worst risk: flooding, and the last horrible one happened in 1966. The year we moved into our palazzo was the 50th anniversary of the flood.

Old-timers told me some people never got over the damage the flood wrought back then. Some people took to drink. Others suffered when their social milieu irreparably shattered. And this was half a century or more after the fact.

I looked at them with my experiential knowledge of Cleveland County and Oklahoma County, and thought, “Oh you poor dears, you have no idea what we’ve just come from. A version of Australia in the apocalypse minus the cute mammals.” Even so, our landlady wrung her hands over the changing climate: it wasn’t like this before, she said, now we get the water bombs! She gestured at the glass insets of the grand doors. It just blows out the windows!

Few people can choose where to live based on climate, and yet our climate is changing annually at a breakneck pace. I find it difficult to imagine how stressful we would find living in the Oklahoma heat alone, never mind its year-round weather assaults.

Yet, as I write, Italy is in its worst drought in 70 years, and Florence has been pummeled under a heat wave that began – wait for it – on May 8. That’s right. Almost no relief in sight for more than four months. The heat finally broke on September 16.

We knew the summer would be tough, but not this tough. Europe is on fire in many of its corners. Tourists stream in, insisting on clocking their pandemic-delayed holidays. Florence alone has seen more than a 250% increase in tourist numbers over the 2019 years.

There’s nowhere to stay, and the city is roasting. Jason and I wonder what percentage of Misericordia calls (the ambulance service he drives for as a volunteer when we are at home) are for a special tourist form of heat exhaustion.

No doubt, we say, the nonni [grandparents] and older Italians still hew to their rules: use the morning and evening hours, stay in the shade, drink cool drinks, manage your shutters and windows. Surely, only the tourists insist on being out and about in town during the day, water bottles in hand, wearing their TravelSmith™ wicking apparel?

But when the Italian weather service advises people to remain indoors for their health due to the extreme heat between 11 am and 7 pm, there’s little time to get anything done. My friends who spent the summer in Florence are at their wit’s end. The end of their rope. Who can live like this?

Italy has virtually no air conditioning at the level Americans are used to, and maybe that’s a good thing, on the one hand, because air conditioning is terrible for the atmosphere. But on the minus side, there are no cool groves to escape to. Pavement is hot and holds heat, as do flagstones and renaissance buildings.

So in January, when the airfare was cheap, we bought our tickets to return to the Pacific Northwest for the first time in five years as a family.

The Oregon coast was blissful, misty, and cool. Almost too cool. The last cool place on earth, we joked.

Wearing our fleece and layers, we watched the surf pounding so loud that it was hard to carry on a conversation on the beach.

And yet, the moment we left the narrowest strip of coast, we found ourselves once more in cities that held heat, heat, and more heat: Portland and Seattle. Portland was so hot the kids didn’t want to leave the car.

I thought I might expire in the sun of the parking lot of the Nordic Heritage Museum as my companion scrutinized the parking pay meters. The air conditioning in Portland and Seattle was suspiciously Italianate in its limits: musty, weak, indifferent.

I’m not joking when I say the thing I most looked forward to on our return trip from Seattle to Milan was how cold the economy cabin would be for nine hours. And in Milan, we descended from a hedge of dark clouds that soon began to spit lightning.

We waited for our hotel shuttle in a cloud of petrichor, misted from the side by the sheets of rain as we stood beneath an overpass, laughing at the sheer joy and relief of it. The next day we packed our car and drove to our summer escape in La Rosière at 2000 meters elevation, perhaps the last temperate hill in Europe.

The valley below is many degrees hotter than up here. Last month an Italian glacier, La Marmolata, crumbled and killed 10 hikers. We’re not doing much hiking this year in La Tarentaise for other reasons, but I am personally not tempted to go check out the slushy skirts of Mont Blanc.

Rain, when will the rain come? Cool breezes, when will they return? We talk about the weather all the time now. The changes are happening so fast, and the new normal quickly becomes the plain old normal. Of course we would plan our travel around avoiding extreme temperatures. I know we are lucky that we can even do this.

I think about this all the time: what of the people who can go nowhere, who must endure what weather comes, as heat blankets the days and suffocates the nights?

The carbon offsets have been much on my mind too. I don’t feel at all like air travel is a right. I know we exercise a significant privilege by simply booking and taking the flights. How many billions of people a year do not travel at all by air, ever?

So today I donated a fair sum, calculated against our family’s four sets of flights from Milan to Seattle and back, to Trip and Tree, which seems like an honest outfit to me. They partner with Air France and are the default option for carbon offsets purchases with flight.

I reviewed the options for a while and finally settled on helping to reforest a preserve in the mountains of Northern Mexico. I hope they actually plant and grow the 125 trees!

In any case, it is a practice I plan to keep up, moving forward, as much as I can. I can’t even tell you how many long-haul flights I have taken in my life, since I was 19, but this is just a drop in the bucket of a life that has been characterized by privilege.

Is it not hedging a tiny bit in favor of my own children’s future, the future of us all, the future of the planet? I genuinely felt it was the least I could do, and a step in the right direction of a sustainable lifestyle.

Not always going for the cheapest option. Not always carrying on about saving money. Of course, when it’s important, it’s important to do so. But when we live lives of privilege, shouldn’t we try to be better than the lowest price, the lowest common denominator: What is the actual cost? Shouldn’t we pay the actual cost? Otherwise, who pays? The cost gets passed on to someone. And that just doesn’t seem fair at all to me.

This article was originally published on Monica’s own blog, sharpmonica.com. For the original article, see here.